Belarus authorities continue their crackdown against all new forms of protests.  Initially security services were unprepared to actions such as Stop Petrol or Social Networks Revolution. But subsequently they found ways, often illegal even under Belarusian law, to prevent... 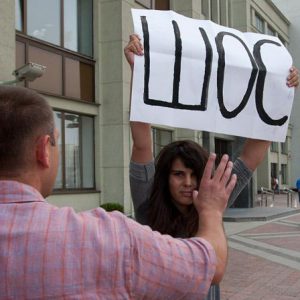 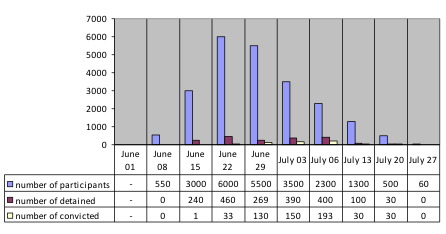 “This Crisis Makes Me Rich” 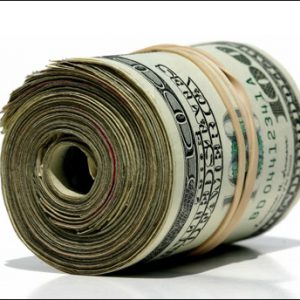 The reasons why neo Soviet economy of Lukashenka has failed are well known to economists. Without a steady input of foreign currency it has simply collapsed. The main recipe how to deal with the crises is the same from East to West – Belarus must switch to a more market oriented economy.

The first step what Russia and the IMF demand is liberalization of the foreign exchange market. If the authorities have no resources to support the local currency – they should let it fall. It will be a shock at first, but in medium- and long term it will boost the exports and give a chance for many to recover. However, some influential forces in Belarus are against this seemingly logical step.

There are two possible answers: the decision-makers are either very dumb or very clever. Having spoken to a Belarusian businessman (see quote in the headline) the author is tending to the second.

The scheme of making big money on the exchange rate differences is very simple. Everyone in Belarus knows, that all big businesses need to have support from close associates of Lukashenka. All major decisions need their endorsement or approval. One such thing is the allocation of foreign currency at favourable rates and on what it can be spent.   Multiple exchange rates leave great scope for manipulation.

For example, the National Bank of Belarus sells importers of medicines hard currency at the official rate of 1US$=5 000 Belarusian Rubles (BYR). Having received hard currency at a low rate, the importer can place his products on the market also at a lower price. This is common practice – the Ministry of Health issued a list of medical supplies not being produced in Belarus for which foreign exchange is allocated.

The right to purchase foreign currency at the favourable rate for purposes other than medical supplies is allocated on non-transparent basis and not published. This is the sole descretion of the President and his inner circle.

How the scheme works

The scheme to make big money on currency exchange differences is simple. A Belarusian importer buys western commodity, which can be easily sold within Russia. To pay for the goods his influential friends get approval through the Central Bank to his company to buy hard currency at the official low rate. Having imported the goods, the importer immediately sells them to Russia for Russian Rubles (RUR).

Expecting high profits the re-seller can set a very low price, so that the Russian buyer buys and pays quickly.  Having received the payment in hard currency (RUR) the importer sells this currency to Belarusian companies, which desperately need it to buy imports. This time not at the official rate, but at a much higher real market rate (e.g., 1US$=7 500 BYR). This can make up a margin of 40-60% for every transaction. This businessman then shares the profits with his government sponsors.

This is only one example how the ruling regime can use its absolute power for its benefit. The ruling group controls big parts of the economy either directly or through affiliated firms. The main instrument of power is the administration of the President, which stands above every law and is the final decision-maker.

No private business in Belarus is possible with some kind of government protection. On a lower level it means that a businessman have to be well connected to the local authorities. For example, it is much easier to establish or operate a local business for the son of a mayor than for an ordinary person. The local government structures will not dare to bother him fearing his retaliation.

If the business exceeds a certain level the local authorities protection is not enough – a higher protection from Minsk is needed. The administration of the President is monitoring carefully every major business. If the profits are high they will either force the owner to share, will take it over completely or destroy it. They have all the power and authority to do so. No court, media or other institution can help.

Therefore, the most lucrative businesses such as lotteries or arms trade are under control of Lukashenka family or a small group of close businessmen. It is not a surprise that the European Union imposed sanctions against the biggest Belarusian arms trading company “Beltechexport“ which is run by Vladimir Peftiev, a close associate of Lukashenka.

Not only private companies, but also big state owned enterprises are a tool for financial manipulations.  Like satellites, a number of smaller companies are orbiting these economic giants acting as intermediaries. They are also controlled by the ruling group. In 2006 the United States administration introduced sanctions on the largest Belarusian oil processing company “Belneftekhim“ and its subsidiaries knowing that they are under the direct control of Lukashenka and his close associates.