Very few remember that in 1993, the Belarus House of Government was stormed by some Alexander Lukashenka who was then a member of the Belarus parliament. Police did not let Mr Lukashenka inside the building, but he was breaking...

The Consequences of the April 11 Minsk Bombing 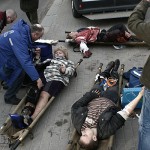 The explosion in Minsk underground is the most tragic terrorist act, which Belarus has seen since the end of the Second World War. The bomb exploded at the busiest station of Minsk subway on Monday evening. Over two hundred people injured and eleven reported dead as a result of the rush hour bombing in the capital of Belarus. It was clearly a terrorist act. Who is behind it is a more difficult question. Belarus is not waging any wars, has a homogeneous population and no unsettled territorial disputes.

Belarusians were regarded as the most peaceful and non-violent nation in the former Soviet Union. But with the second terrorist act over the last years this perception of stable and peaceful Belarus is changing. On 3 July 2008, there was another explosion at a public celebration in Minsk. No-one died then but over forty people were injured. Today, eleven people are already confirmed dead and the number may grow.

Until recently, the main threat of instability in Belarus was irresponsible economic policies of its government which made itself completely dependent upon Russian subsidies in the form of cheap oil and gas. But 11 April 2011 has changed that. In addition to threats of imminent economic collapse and loss of political independence the threat of terrorism has actually materialized.

Instead of looking for real threats to Belarus, its people and statehood, the authorities had been focused on eliminating and marginalizing their political opponents. Following the December presidential elections, they imprisoned a number of opposition activists for participation in a largely peaceful demonstration against election fraud, which resulted in minor damage to a government building in Minsk. Many consider that the authorities staged that provocation – either actively or passively by leaving the main government building in the center of Minsk completely unprotected when tens of thousands of protestors were out on the streets.

The current regime in Minsk used that event as an excuse for wide-scale political repressions against Belarus opposition and civil society, which still continue. Some already fear that the authorities will use the today’s tragedy to eliminate any remaining signs of political pluralism and to distract people’s attention from economic problems.

The terrorist act is likely to make Belarus even more vulnerable to pressure from Russia to which it already turned for assistance in investigation. Regrettably, Russia is one of the least peaceful countries in the world. It suffers from terrorism, wages a war against islamic insurgents in its south, and actively supports separatist regimes in Georgia and Moldova. Currently, there is no border or customs control at the Belarus-Russia border.

It remains to hope that as a result of the post-election political and economic instability, Belarus will not turn into a new South Ossetia of Eastern Europe.