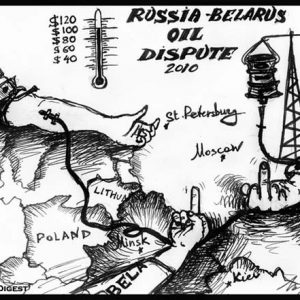 Russia continues to cut subsidies to Belarus economy. This time, it has reached the lucrative oil refining business, which had already been hit by the US sanctions. Belarus inherited from the Soviet Union two large oil refineries – one in Navapolatsk and the other one in Mazyr.

According to Russia, Belarus enjoyed duty-free prices for oil and its derivatives, intended both for domestic use and transit. In 2010 n only oil for domestic consumption can be exempt from duties. This is something the Belarus Government is strongly opposed to.

According to analysts, after Russia cut crude supplies to Belarus oil prices hurdled 80 dollars a barrel on the first trading day of the year Monday. The move will certainly worry Europeans, who still remember natural gas wars between Russia and Ukraine. At some point left several eastern European cities were left without gas for days. But, as the Financial Time notes, oil is more fungible than gas and easily made up with alternative suppliers, so the consequences of the dispute are unlikely to be as severe. Here is the Belarus position:

On January 1 a spokesman for the Belarus government told Interfax news agency that “unprecedented pressure” had been put on their delegation during the negotiations. Minsk called on Russia to continue supplies to Belarus under the old terms, until a new agreement could be reached.

It warned that Russian demands would violate a customs union agreement signed last year by Belarus, Russia and Kazakhstan, and “would undermine all agreements reached on the further integration of our states”.

The dispute is likely to present an obstacle to closer ties between the two countries. Belarus is virtually Russia’s only ally among former Soviet republics.

Moscow and Minsk signed a series of treaties aimed at unifying their countries in the 1990s, though these have failed to be realised amid friction between the Kremlin and President Alexander Lukashenko of Belarus. Likewise, the customs union agreement remains largely on paper.

Read more about the oil price dispute at FT.com and in New York Times.