Belarus’s diplomatic activities slowed down before the holidays in December. The country’s diplomacy focused mostly on a multilateral agenda in preparation for its chairmanship of the Central European Initiative, as well as manoeuvring at the United Nations. 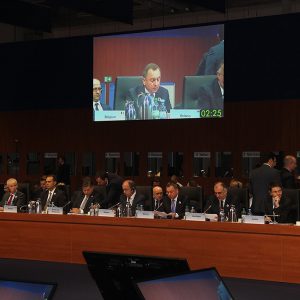 Belarus’s diplomatic activities slowed down before the holidays in December. The country’s diplomacy focused mostly on a multilateral agenda in preparation for its chairmanship of the Central European Initiative, as well as manoeuvring at the United Nations.

Foreign minister Vladimir Makei’s statement at an OSCE meeting was perhaps meant to be a programme declaration, but in reality it amounted to little more than bragging about Belarus’s arguable achievements and ambitious plans.

Belarus has strengthened its diplomatic presence in Europe but has failed to avert the deterioration of its political relations with Ukraine.

On 8 December, Vladimir Makei spoke at the OSCE Ministerial Council in Hamburg. His statement took the form of a set of suggestions aimed at preventing further degradation of Europe’s security architecture.

Belarusian President Alexander Lukashenka’s recent idea of a new peace-making project modelled after the Helsinki process of the 1970s was the centrepiece of Makei’s statement. In November, Lukashenka invited the leaders of Russia, the United States, the European Union, and China to come to Minsk to negotiate a new world order.

Realistically, Belarus’s foreign ministry seeks to convene a meeting of experts in Minsk to discuss the new geopolitical situation. The idea of a global summit in Minsk may be nothing more than a clever sales pitch for this expert gathering.

Most of Makei’s other suggestions were merely a clumsy attempt to publicise the country’s recent foreign policy achievements among his European colleagues.

Speaking on the need to promote connectivity in Europe, Makei mentioned Belarus’s imminent chairmanship of the Central European Initiative in 2017. However, few people would argue that the Initiative has played any significant role in regional cooperation so far.

Belarus’s foreign minister also extolled inter-parliamentary contacts as a 'breeding ground' for important constructive decisions, helping to bridge differences among nations. In this context, he alluded to Belarus hosting the summer session of next year’s OSCE Parliamentary Assembly.

Nevertheless, the role of MPs in today’s diplomacy is probably exaggerated. The authorities will use the gathering to help its appointed parliament acquire international legitimacy.

Makei did not fail to remind the international community about Belarus’s role in negotiating a peaceful solution to the Ukraine crisis. However, European diplomats are well aware that Belarus’s contribution remains limited to providing a convenient venue for working-level negotiations.

The foreign minister hailed his German counterpart's initiative to re-launch conventional arms control. In this context, he managed to mention Belarus’s chairmanship of the Collective Security Treaty Organisation as well as the country’s decision to renounce nuclear weapons twenty years ago. However, Vladimir Makei failed to mention that his boss, Alexander Lukashenka, had once called this decision an 'egregious blunder'.

Few people expect a large enough surge of Belarusian exports to Georgia, Spain, or Sweden to make a difference for the country’s foreign trade balance.

Minsk may have been guided mostly by political considerations. The expansion of Belarus's diplomatic presence in Europe, together with the recent opening of the Austrian embassy and the appointment of the Dutch chargé d’affaires in Minsk, falls well in line with Belarus’s policy of unfreezing relations with Europe.

Belarus finally re-opened its embassy in Stockholm, which had closed down after a diplomatic conflict in 2012. Minsk needs a more intensive dialogue with the Nordic countries, as this part of Europe remains the least supportive of normalisation of Belarusian – European relations on 'easy terms'. However, a full restoration of relations can happen only with the appointment of a new Belarusian ambassador to Stockholm.

Vladimir Makei traveled to Tbilisi on 20 December to open Belarus’s embassy there. Recently, Belarus has been emphasising the development of political and economic relations with Eastern Partnership members, hoping for greater independence from Russia. Full-fledged diplomatic ties between Belarus and Georgia will help the two countries to better coordinate their policies towards both Moscow and Brussels.

December marked the 25th anniversary of Belarusian and Ukrainian diplomatic relations. However, recent difficulties have cast a shadow on the celebrations.

The bilateral turnover grew by 10% in January – October 2016 compared to the same period in 2015, with Ukraine firmly establishing itself as Belarus’s second largest trading partner. Last autumn, Minsk and Kyiv managed to put an end to a tariff war between the two countries.

However, despite Belarus’s tacit refusal to support its closest ally, Russia, in the latter’s hybrid war against Ukraine, political relations between Minsk and Kyiv have lagged behind their economic ties. The two countries’ leaders have not met in a bilateral format since Petro Poroshenko’s inauguration. 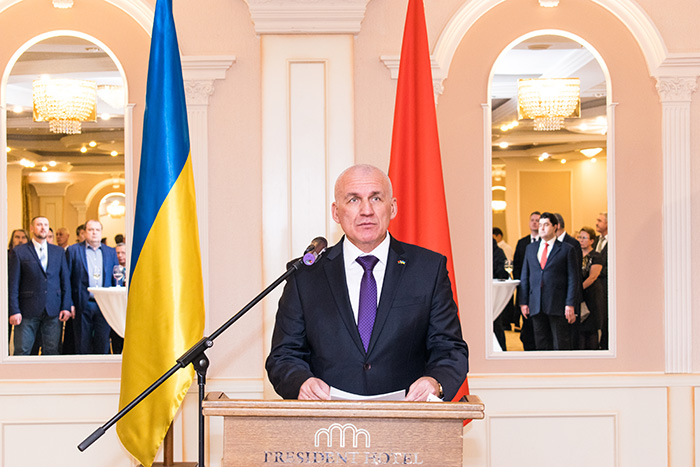 Lately, Ihar Sokal, the newly appointed Belarusian ambassador to Kyiv, has repeatedly emphasised the fact that over eighty per cent of Ukrainians have a positive attitude towards Belarus. However, many among Ukraine’s elite look very badly on Belarus’s recent vote against the UN resolution on human rights in occupied Crimea.

This disappointment over Belarus’s unwillingness to openly condemn Russia has cooled diplomatic ties. Senior officials of the two countries’ foreign ministries have boycotted receptions given by the respective embassies to celebrate the 25th anniversary of diplomatic relations. Minsk may also have reacted in this way because of Kyiv’s delay in appointing a new ambassador to Belarus.

On 10 November, Alexander Lukashenka and Petro Poroshenko agreed over the phone to meet in person before the end of 2016. The meeting failed to take place.

Lukashenka’s encounter with former Ukrainian leader Leonid Kuchma in Minsk on 22 December may have represented an attempt to diffuse tension. However, doubts remain as to the feasibility of a meeting between Lukashenka and Poroshenko in the near future.

The developments of the end of 2016 prove that Belarus is still more at ease working on relations with its European partners than most 'Distant Arc' countries. However, the steady stream of positive events in relations with Europe has so far failed to bring about full acceptance of Alexander Lukashenka as an equal partner by his European counterparts.

Freedom of expression: why do Belarusian authorities fear graffiti? 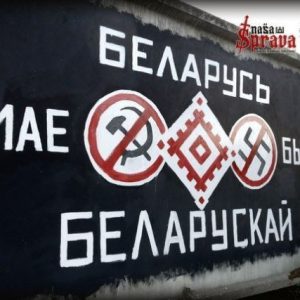 The work of Belarusian street artists who received a fine. Source: racyja.com

Street art has became a new form of political expression. The disproportionate reaction of authorities to street art is reflected in administrative punishments, harsh beatings, and regular KGB checks.

Freedom of expression in Belarus remains highly restricted. Positive changes in visa policy, a decrease in political repression in 2016, and the release of six political prisoners in 2015 have raised hopes that the country is liberalising. However, as the prosecution of graffiti artists demonstrates, Belarusian authorities are still unwilling to make concessions to citizens and open up spaces for free expression of ideas.

Street art has become a tool for expressing and illustrating political views in many European cities. However, Belarusian streets are different than in Europe in that they have almost no graffiti. 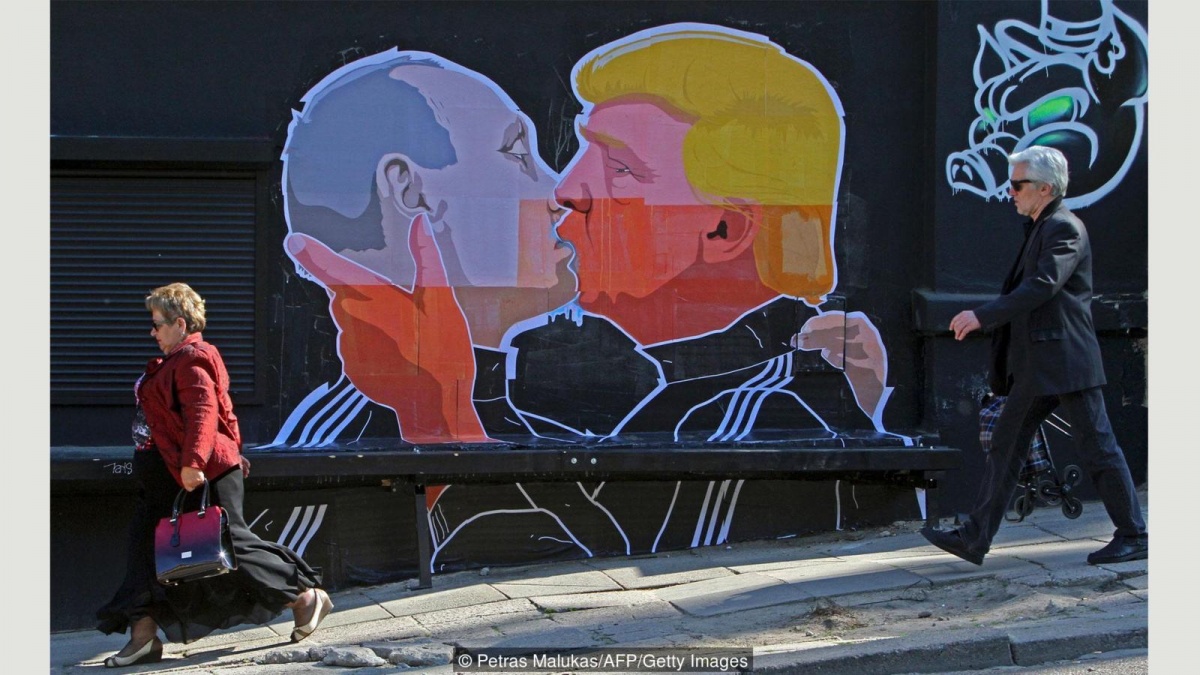 Illicit paintings in Belarus survive for no longer than a few days or sometimes even hours. Authorities usually prosecute street artists for political paintings according to article 339 of the Criminal Code on ‘hooliganism’.

The first graffiti case to elicit a disproportionate reaction occurred in 2005. The youth activist Artur Finkevich faced 12 years of imprisonment and spent more than 20 months in jail for writing the anti-Lukashenka slogan 'We want a new one (instead of Alexander Lukashenka)!' on the wall of a building in Minsk. Human rights defenders recognised Finkevich as a political prisoner who had been prosecuted for his active political position.

In 2015, street artists painted a bird in a cage, symbolising the fight of Belarusian journalists for their rights, on a building in Vitebsk. A short time after, the piece was covered in grey paint. Nevertheless, journalists who managed to photograph the painting received fines for participation in a so-called unsanctioned strike action.

Later, local authorities agreed that the painting was just an art piece and the photo-shoot was not a strike. However, journalists and human rights defenders believe that the authorities saw the graffiti as ‘ideologically dangerous’.

In 2016, an unknown artist in Minsk added thorns on the garland and bouquet of a girl and boy painted onto the face of a building. Initially the street art, painted by a Russian artist in the style of socialist realism, aimed to depict the friendly relations between Russia and Belarus. Minsk authorities are currently preparing a court case against the painter, whose name has not been disclosed to the public.

One of the most famous graffiti cases occurred in August 2015, when the investigative committee started a criminal case against the three street artists Maksim Piakarski, Viačaslaŭ Kasinieraŭ, and Vadzim Žaromski. The civic activists were threatened with imprisonment for one to six years for two instances of graffiti and damaging a billboard with colour.

Their graffiti message conflicted with state ideology, and therefor led to a criminal case, as the human rights centre Viasna remarked. One painting stated ‘Belarus should be Belarusian’, while the other read ‘Revolution of Consciousness’.

Violations of the artists' human rights during their detention and the disproportionate sentences they received led to a public outcry. In the end, the street artists received fines totaling 25, 000,000 BYR (around 1000 British Pounds). With the help of Art Siadziba, the activists gathered the money through a public campaign.

Human rights defenders classified the street artists as political prisoners. Ales Bialiacki, the head of the human rights centre Viasna, commented to Radyjo Racyja that any form of civic activity in Belarus which contradicts official state ideology is punishable by the state.

On 22 December 2016, the three graffiti artists initiated a claim against the investigative committee for falsely accusing the artists of extremism and hooliganism. According to the investigative committee, Maksim Piakarski, Viačaslaŭ Kasinieraŭ and Vadzim Žaromski had published extremist material, including propaganda of violence against the police. 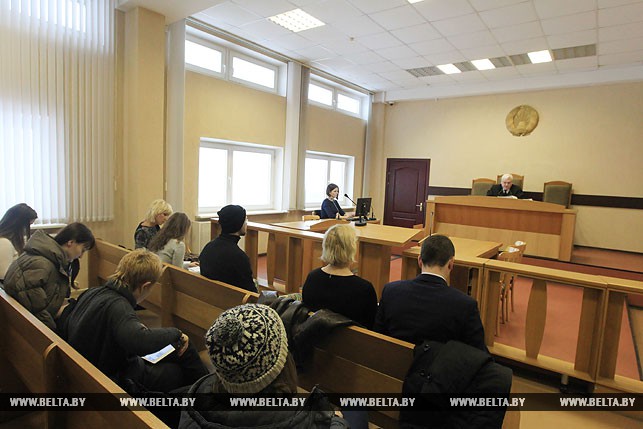 The artists first aimed to prove the accusation false and show that the committee had violated the disclosure principle. Moreover, The committee had released photos of extremist materials which according to the painters has no relation to them. The proceeding, held on 13 January 2017, was short. The court decided that the painters' rights had not been violated, in accordance with a decision by media law and the criminal code.

Why do Belarusian authorities perceive street as a threat?

Regular restrictions of rights, the prosecution of civic activists, and violations of freedom of speech, as in the case of John Silver, who suffered during detention and received personal threats to himself and his family, hardly surprise anyone familiar with Belarusian politics. However, punishing street artists for expressing their thoughts through graffiti is a new form of oppression. The court decision regarding the case of graffiti artists versus the investigative committee is evidence of Belarus's oppressive system.

Expressing political opinion through street art would be unlikely to mobilise citizens to protest against the regime. However, the practise of repressing dissidents, such as bloggers, anarchists, and graffiti artists reflects the state's fears: graffiti with political slogans attracts a great deal of attention in social and mass media. In this way, authorities perceive street art as a form of protest equally dangerous to demonstrations or strikes.

The ongoing prosecution of citizens who express their political opinions through the arts indicates that political repression in Belarus, despite the release of political prisoners, is ongoing. The state will most likely continue mainly to protect the political status quo rather than protecting the rights of citizens.