The April 11 Terrorist Act in Belarusian Press and Blogs

Belarusian authorities, the opposition and Russian security services as possible organizers have been the most discussed unofficial suspects of the April 11 Minsk bombing. All theories explaining the terrorist act at this stage are mostly speculative and not based... 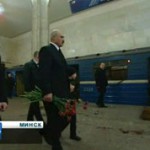 Belarusian authorities, the opposition and Russian security services as possible organizers have been the most discussed unofficial suspects of the April 11 Minsk bombing. All theories explaining the terrorist act at this stage are mostly speculative and not based on any concrete facts. However, looking through these theories is important to understand the public mood in Belarus today.

The details of the tragedy and various theories behind it are in the focus of all major Belarusian media, both government-controlled and independent. Other topics, such as devaluation of the Belarusian ruble and repression against opposition groups were overshadowed by yesterday’s tragedy.

Shortly before the April 11 events, the leading opposition internet media – BelarusianPartisan.org and Charter97.org had been blocked in all state institutions in Belarus. The authorities explained their decision by alleged violations of a law which prohibits announcement of public events, such as political demonstrations, if the organizers were unable to secure official consent to conduct such events. These web sites, as well as the internet website of Nasha Niva, an opposition weekly newspaper, were also subject to DOS attacks. Over the past few days access to these sites had been unstable, particularly from Belarus.

Many bloggers and some opposition websites were quick to accuse Belarusian authorities of organizing the bombing. For instance, BelarusianPartisan.org published an interview with Colonel Uladzimir Baradach, who suggested that the Belarus regime wants to consolidate power around Lukashenka when the country is facing the worst economic crises since the collapse of the Soviet Union. Only the Belarus regime had the organizational capacity both to carry out the attack and then use it for PR purposes.

Colonel Baradach suggested that the authorities might arbitrarily “appoint” someone to be guilty. According to him, the authorities would benefit from consolidating and channeling public anger and they will make sure to create a credible image of an external enemy. That would also distract the population from economic problems. Those who do not support this version believe that the Belarusian authorities have not reached the level of brutality necessary to organize a terrorist act of such magnitude.

The state-owned newspaper Belarus Today focuses primarily on Alyaksandr Lukashenka’s statements and actions which followed the terrorist act. He was on the scene of the tragedy a few hours after the explosion with his 7 year old son and flowers. Following Lukashenka’s statements, Belarus Today hinted that those who ordered the bombing were likely to be located outside of Belarus.

The official newspapers are not yet blaming anybody in particular for the terrorist act. But comments of those who usually represent pro-government position suggest a possible link between the unrest which followed the presidential elections and the April 11th terrorist act. They accuse the Belarusian opposition of trying to destabilize the situation in Belarus as well as of schadenfreude and baseless speculations following the tragedy. Proponents of this version usually do not mention that the opposition has never resorted to violence in the past. Moreover, some of its most prominent leaders, including two former presidential candidates, have been kept in prison since the recent presidential elections.

The third version popular among bloggers is to blame Russia. According to this version, it was primarily Russia which was interested in further weakening of political and economic stability in Belarus. Russian authorities know that in its isolation from the West Lukashenka will have to turn East once again for help. Proponents of this version also believe that the Russian authorities have significant experience in using terrorist acts to reach their political goals. However, Russia does not appear to be interested in the collapse of Lukashenka’s regime because they are likely to face uncertainty and Belarus may start drifting westwards.

It appears that following the initial shock, Belarusian authorities can follow one of the two main scenarios to handle the terrorist act – the “autocratic” scenario or the “democratic” scenario.

Autocratic states use terrorist acts as an excuse to ruin civil society and further consolidate power. This approach usually fails to prevent new terrorist acts. For instance, although Russia dramatically limited political freedoms over the last years, that did not help it to avoid terrorist acts, which happen with tragic regularity. The recent explosion in the Domodedovo airport is the most recent example of this.

On the other hand, democratic states are very careful about restricting civil freedoms even following terrorist acts, let alone curbing political pluralism. They try to consolidate the society at large rather then to polarize it and silence it. The result of their approach is an effective minimization of terrorist threats. The United States has been successful in preventing major terrorist acts on its soil since the 9/11 events.

Picturing democratic opposition and Belarusian civil society as terrorists, supporting rough regimes overseas and playing political games with Russia certainly makes Belarus less secure and increasingly vulnerable. It is neither in the interest of the Belarusian regime nor of those who want to see a transition to democracy in Belarus.