Ethnic Poles rising in western Belarus was what Minsk and Moscow happened to choose as a scenario for their 2009 joint military exercise. As if ashamed of its lack of judgment last year, the Belarusian leadership is now doing... 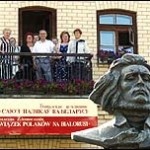