The main economic events for October in Belarus revolve around Russia: the ratification of the Eurasian Economic Union, the continued fighting over the re-export of banned European foodstuffs to Russia, and, finally, an argument over Russia’s oil tax manoeuvre. 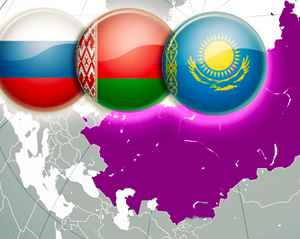 The main economic events for October in Belarus revolve around Russia: the ratification of the Eurasian Economic Union, the continued fighting over the re-export of banned European foodstuffs to Russia, and, finally, an argument over Russia’s oil tax manoeuvre.

Russia’s actions, both political and economic, further complicate the situation with the Belarusian economy, which is exhibiting subpar growth for the third year in a row. Ironically, its troubled economy is forcing the Belarusian government to seek even more assistance from Russia.

The complicated economic relationship with Russia was front and centre in news coverage during October.

As the Belarusian Parliament was contemplating the ratification of the Eurasian Economic Union (EEU) trade pact, Russia threatened the economic stability in Belarus with its oil tax manoeuvre. Under the terms of their bilateral agreement, Belarus has to pay an oil export tariff into the Russian state budget for an oil refinery product produced using Russian oil and that is destined for export.

Before signing the EEU agreement in May, Belarus negotiated a $1.5bn discount on its oil tariff payments for 2015. But afterwards Russia de facto annulled this preferential deal with its oil tax manoeuvre, a move which partially replaces the oil export tariff with an oil extraction tax. Instead of saving $1.5bn in 2015, Belarus would have to pay basically the same amount back to Russia, effectively eliminating much of the income it hoped to bring in.

The disappointment surrounding the Russian ban on EU foodstuffs, which turned out to be not as profitable for Belarus as it had hoped (in particular, TIR business has suffered and the potential for re-exporting goods was significantly lower than expected), this tax manoeuvre has Belarusian society and the government questioning its choice of integration projects.

Just days before ratifying the trade pact, Russia made a promise to compensate Belarus for the oil tax manoeuvre, though how much it plans to offer has not been specified. Despite these issues, this conflict made one thing clear (and Lukashenka later spelled it out during a press-conference for the Russian regional media) – Belarus has zero interest in Eurasian integration unless Russia is going to pay for it.

In January-September 2014 the Belarusian GDP has grown only 1.5 per cent. The expected gains from the Russian EU food import ban did not materialise in August or September – the food processing industry is still stagnating, witnessing a 1.9 per cent decline in output.

But the other branches of the economy are experiencing decline as a result of the shaky economic situation in Russia. The production of goods traditionally exported to Russia – for example, machinery, transport vehicles or consumer goods like TV sets or refrigerators – has declined substantially.

Exports of these investment goods (machinery etc.) have also dropped due to the high level of economic uncertainty and a lack of financing in Russia, which is itself a result of declining levels of investment. An additional factor affecting the overall economic environment is the devaluation of the Russian rouble, which makes Belarusian goods relatively more expensive in Russia.

The exchange rate factor drives down consumer good exports as well. Moreover, it puts additional pressure on the Belarusian rouble, and the National Bank is already considering whether or not to increase the tempo at which the national currency is devaluated.

Trade, and, in particular, retail remains the main driver of growth in the economy. Retail is developing dynamically due to both the partial liberalisation of the sector and to a high level of income growth. However, as real incomes slow down, retail is slowing down as well. Over 2014 the real income growth declined from 9.4 per cent to 2.7. Retail is reacting with its own slowdown, declining from 13.6 to 9 per cent over 2014 (see Figure 1), and the expectations for the next year are similarly discouraging.

The worsening economic situation in Belarus, ironically, forces it to look for more financial support from Russia. Belarus still needs financing to repay its loans in 2014 and 2015.

Russia is currently facing financing constraints itself, given the sanctions its largest banks are dealing with. Nevertheless, it promises to help, but with strings attached, of course.

On 21 of September 2014 Russian Prime Minister Dmitriy Medvedev during a visit to Minsk emphasised that Russian corporations are hoping to privatise several Belarusian state enterprises. The enterprises in question are, among others, the truck manufacturer MAZ, the electronics company Integral, military equipment procuders MKTZ and Peleng, and the nitrogen fertiliser manufacturer Grodno Azot.

While experts and international organisations, including the IMF and WB, have long advocated for the privatisation of these enterprises, the sale to Russian state corporations would only bring about modest increases in efficiency at best.

A Surge in Bitumen Exports

Bitumen sales schemes are starting to replace the old solvent sales schemes of 2012. Bitumen is a semi-solid that is extracted from heavy crude oil during the refining process and is more commonly known for being used in asphalt. In 2014 Belarus will still be required to make oil export tariff payments for exporting oil refinery products made from Russian oil. It turns out, however, that certain kinds of bitumen are not on the list of refinery goods.

The scale of the operation so far has fallen short of the solvents smorgasbord of 2012. The Russian side has already expressed its concerns and initiated the creation of the working group to investigate the issue. Thanks to the oil tax manoeuvre, the bitumen scheme will become irrelevant in 2015, and Belarusian refineries will have to find other ways to survive. 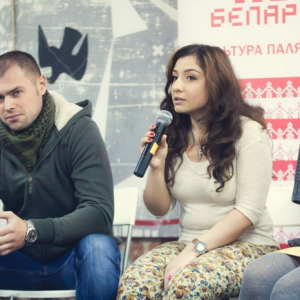 Discussion during the project "Borsch or career"

A new portal ngo.by is launched. Anyone who searches partners for joint projects in Belarus and abroad, wishes to be a volunteer or seeks volunteers services volunteers, as well as interested in scholarships, training, educational events can register on the web site.

Civic cultural campaign Budzma runs a gender talk-show under the provocative brand “Borshch or career?”. Topic of female activity remains a traditionally polemic one in Belarusian society and Budzma campaign known mostly for promotion of national language looks to change the accents of its activity. Series of journalistic materials “Let’s be Belarusian women!” (Budzma belarusKami!) is now followed by an offline talk-show and promotional video at Youtube which has less then one hundred views in contradiction to “traditional” cultural mediaproducts of Budzma.

First meeting of Speed-dating in Belarusian took place on 30 October. 10 ladies and 10 gents have 2 minutes to know each other better and to communicate in Belarusian language. As a result of speed dating they fill a form giving marks to their partners. If the marks feat each other successfully the participants are informed by the organisers. People love dating apps free because they can feel safe behind the phone, you don’t get as anxious and you meet amazing people.

Representatives of Local Leader courses run by Oeec.by win at Social Weekend. Marina Alexeenko, Bashni agrotown, got a prize from the construction company realt.by. Also, the Union of Entrepreneurs will assist to engage local business to the project. Project aims to equip a school with sports equipment and conduct sports events for children and their families.

Elena Budnik, Brest Regional Development Fund, got prizes from mamochki.by and a people’s judge. Project aims to create a positive atmosphere in Brest children hospital through visits of clowns-doctors and equipment of a game room with cheerful drawings and toys. One can watch a video on results and see the full list of winners.

Belarus in Focus Information Office launches ‘Belarus in Focus 2014’ – the fourth edition of an annual competition for journalists who write about Belarus for international media. Winners will receive up to 500 euros, and have the chance to network with jury members, fellow journalists and experts at a two-day workshop in Warsaw in spring 2015. Articles can be submitted in English, Danish, French, German, Russian, Polish, Spanish, and Swedish.

United Way Belarus NGO launches a new service for ngo.by portal users. Anyone who searches partners for joint projects in Belarus and abroad, wishes to be a volunteer or seeks volunteers services volunteers, as well as interested in scholarships, training, educational events – is welcome to register at the Universal Platform.

Commemoration of Victims of Stalinism took place on 29th of October. Activists hold memory actions at Kurapaty and other places of repressions. 29 October is known as Black Day for Belarusian literature. In 1937 the night from 29 October took lives of more than hundred representatives of Belarusian intelligence.

​​The results of sociologic research on Belarusian literature show that the situation with reading in Belarusian has become a catastrophe. Only 5 per cent of readers prefer literature in Belarusian and 40 per cent of the respondents say that they don’t know Belarusian well enough to read. The survey was conveyed by the “Novak” laboratory for the Belarusian Writers’ Union and campaign “Budzma!”. The state representatives in the person of the National Institute of Education, “Belkniga” JSC, Institute for Journalism (BSU) joined the event, which was followed by BWU open letter to several ministries.​

Monitoring Freedom of Association and the Status of Non-Profit Organizations in Belarus for the second quarter 2014 – The survey was prepared by the Assembly of NGOs and Legal Transformation Centre and covers the period of July 1 — September 30, 2014. Its aim is to reveal short-term tendencies in the sphere of human rights, social, political and economic situation in Belarus. The survey authors note that no important legal changes concerning NGO status were introduced during the monitoring period.

New Practices in Raising Domestic Funds by CSOs in Europe – This paper was prepared by European Centre for Not-for-Profit Law (ECNL) on demand of the Legal Transformation Centre and Assembly of Pro-Democratic NGOs of Belarus. The paper focuses on opportunities to enhance CSOs’ financial sustainability by raising funds from private domestic sources and through indirect state support mechanisms. The paper pays particular focus on new fundraising methods and shares specific case examples, such as crowd-funding, sms and donor message service.

Platform CSO has gained access to Belarusian prisons. This is the only human rights organisation that now has the opportunity to visit the prisons of Belarus. The corresponding permission was obtained from Department of Execution of Penalties of the Ministry of the Interior. The Platform Innovation CSO for three years works in the field of protecting the rights of inmates in the penitentiary system of Belarus.

The Human Rights Centre ‘Viasna’ calls to join the campaign for the liberation of Pavel Vinahradau. The activist of the youth organisation ‘Zmena’ is now serving a 15-day-arrest at the detention centre in Aksrestsina Minsk Centre. ‘Viasna’ recorded 16 cases of detention of Pavel Vinahradau, which make a total of 165 days of arrest. Human rights defenders believe the example of Pavel Vinahradau as evidence of harassment of opposition-minded citizens and injustice in the Belarusian state.