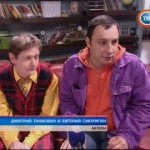 Something the Belarusian bloggers have been laughing about during the past week: the state media had been actively explaining the necessity for the recently introduced regulation of the Internet by the need to fight copyright breach. And here we go – the state television itself is now being accused of the same, with ripping a whole sitcom being a much more serious thing than downloading pirate music from the web.

This scandal is not going to influence the introduction of internet regulations in any way but is simply more than illustrative.

The creator of Big Bang Theory has accused the Belarusian government of ripping off his sitcom.

The East European country has just launched its own sitcom called The Theorists based around the same premise as Chuck Lorre’s American series – in which two socially awkward geeks live opposite a hot waitress.

Lorres pointed out the similarity on a ‘vanity card’ – a mini-essay which flashes on the screen at the end of each episode, too quickly to be read. However, he also publishes the text on his website.

He said that even the opening credits – a fast montage from the dawn of time to the present day – are a carbon copy of the original.