Russian Prime Minister Vladimir Putin made a provocative statement at a pro-Kremlin youth forum this week. When asked about Belarus and Russia becoming a single state, following the USSR model, the former president said: "It is possible, very desirable... 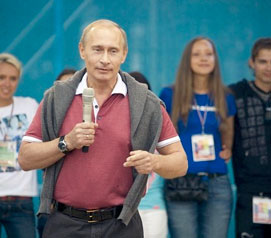 Russian Prime Minister Vladimir Putin made a provocative statement at a pro-Kremlin youth forum this week. When asked about Belarus and Russia becoming a single state, following the USSR model, the former president said: "It is possible, very desirable and depends entirely on the will of the Belarusian people."

A participant of the Russian Youth Forum in Seliger, described by Russian state media as a "representative of Belarus" said that Belarusian people want to join Russia in a single state. "So you should fight for it", Putin replied. Putin has made almost an identical statement about South Ossetia joining Russia.

It would sound outrageous if the German chancellor expressed a wish to annex Austria or a British prime minister would say that he saw Ireland joining the United Kingdom “very desirable”. However, the reality of the post-Soviet area is that such statements are being made and tolerated.

Vladimir Putin is known as the embodiment of the conservative, moderately revisionist part of the Russian elite. There is no doubt that he would really like to see Russia again annexing Belarus and other former Soviet republics.

Opinion polls, however, speak against what the Forum participant said to Vladimir Putin. According to a June poll by a leading independent institute IISEPS, more Belarusians would prefer integration with the EU than with Russia (25 and 35 percent respectively). The pro-EU sentiment has even risen during the current economic crisis in Belarus – even though Russia's policy contributed more to the situation than any sanctions from the EU.

As parliamentary and presidential elections in Russia are approaching, Russian elite faces struggles to secure public support. According to analysts, Putin’s recent creation of the All-Russian Popular Front to bolster pro-Kremlin party United Russia was a reaction to the party’s inability to gather support by itself.

Facing possible problems with popularity, Putin may use the topic of integration with Belarus to improve the the situation – just as Boris Yeltsin was doing in mid-1990s. Then Belarus and Russia signed a number of integration agreements with Russia with lots of pomp.

The difference between now and then is that in the 1990s Lukashenka's position was much stronger and he even dared to consider becoming president of the restored USSR made of Russia and Belarus.

Today Belarus is experiencing serious economic problems which are one step from turning political. It is likely that as the situation would worsen during the coming year or two, Lukashenka could end up on his knees before the Kremlin and agree to any conditions of his bail-out.

Whether the conditions would include a surrender of Belarus’ statehood will depend on the position of Vladimir Putin and his party at that particular moment.

Russia continues to consistently tighten its grip on Belarus while Europe cannot agree on even the easiest forms of support of the Belarusian civil society. As the time passes by, Belarus in getting closer to fall in Russian hands after the fall of Lukashenka.

PDFPrint
https://belarusdigest.com/story/vladimir-putin-plays-with-the-old-imperial-nostalgia/
Alexander Čajčyc
Alexander Čajčyc is a PhD candidate at the Financial University under the Government of the Russian Federation in Moscow.
all articles »
Belarus-EU relations belarus-russia relations free movement of persons Putin Russia 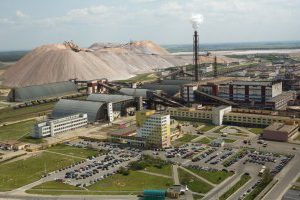 Last week Russia's President Vladimir Putin reiterated that privatisation of state enterprises is a necessary precondition for further financial support. The International Monetary Fund also insists on privatization in its recommendations. But many in Belarus – both in the government and in the opposition camps – bitterly oppose privatization.

Belarusian authorities still control the largest and most profitable enterprises in the country. Nearly full ownership over the economy allows them to maintain tight control over politics as well. For instance, they can put pressure on any state enterprise to dismiss unwanted individuals who then will struggle to find another job.

The workers dislike the idea of privatization too. They know that nearly all state-owned enterprises need to cut their personnel to become more efficient. Keeping them employed is important for the state, but not for future private owners. Directors of state-owned companies also resist privatization because the new owners will inevitably replace them.

According to chairman of Belarus State Property Committee Georgy Kuznetsov, directors of state enterprises are not interested in privatization at all. At his July press conference he gave examples from various parts of Belarus – Lida, Baranavichy and Homel. After investors expressed interest in state enterprises based in these cities, their directors managed to lobby authorities to formulate conditions of privatization which any reasonable investor would refuse to acept. As a result, these enterprises remain state-owned and the directors keep their positions.

Many in the ruling elite and in the opposition are also concerned that Russia will become too powerful if it acquires large Belarusian state enterprises.  Vladimir Putin recently admitted that he considered it very desirable for Belarus to be incorporated into Russia.  That made many in Belarus, both on the government ant the opposition side, worried. According to a once very influential Belarusian Prime Minister Vyachaslau Kebich, "The main aim of Russia is to totally swallow Belarus."

The Belarusian economy has been subsidized for decades by Russia. When Moscow reduced its subsidies in 2010 the Belarusian economy began to crumble and Russia is clearly trying to take advantage of it.  Belarus is still living through hyperinflation and its national currency has already lost nearly half of its value. Belarus struggles to gain external financial aid and privatization is the most obvious source of income, in addition to being a precondition for further external loans.

But foreign investors are not particularly enthusiastic about Belarusian privatization. They know that Belarus has an unstable legal regime and much depends on investors' personal connections.  Moreover, the United States and the European Union imposed sanctions on a number of Belarusian companies which makes the already poor investment climate in the country even worse. That makes investments in Belarus risky. Russian businessmen well-connected to Kremlin clearly have an advantage over other potential investors.

Because of the non-transparent nature of the Belarusian economy and decision-making, it is usually not the highest bidder but the best connected who eventually signs privatization contracts.  Over recent months, Belarus started selling stakes in large state enterprises. The recent example is the largest manufacturer of pump equipment in the former Soviet Union JSC Bobruisk Machine Building Plant. Now the majority belongs to a Russian financial group Hydromashservice.

In some cases the Belarusian government opts for a "delayed" privatization. Russia’s Sberbank and Germany’s Deutsche Bank agreed to provide a joint two billion dollar loan to state-owned Belkali, one of the world's largest producers of potash fertilizers.  The loan was offered on the security of 35 percent of the company’s stock. If this loan is not repaid, these banks would be entitled to take over a large stake of Belkali.  Earlier this year, the Belarusian government also provided guarantees to the Finance Ministry of Azerbaijan which agreed to extend a $300-million loan to Belaruskali.

Because of the unattractive investment climate and political risks in Belarus, many enterprises are sold at cheap prices. The authorities are forced to act quickly because of the depth of the financial crisis in the country. Some analysts think that the less control the state has over the economy, the more likely political changes are. Others fear the rise of Russia's influence and nod to examples of China and Russia where despite significant foreign investments political regimes remain undemocratic.

These days privatization is no longer optional for Belarusian authorities. With the advent of the cold season, it will be even more difficult to keep the sinking economy afloat. Without serious structural reforms or massive financial support from Russia, privatization will only help the authorities to win a few years before another crisis. The main problem is that the Belarusian government has neither the intellectual capacity nor the desire to implement serious reforms.