The Eurasian Economic Community (EurAsEC), a post-Soviet economic bloc led by Russia, agreed in May to extend a loan of USD 3 billion. According to the agreement, Belarus will receive the following funds: USD 1.24 billion in 2011, USD...

The Eurasian Economic Community (EurAsEC), a post-Soviet economic bloc led by Russia, agreed in May to extend a loan of USD 3 billion. According to the agreement, Belarus will receive the following funds: USD 1.24 billion in 2011, USD 800 million in 2012, and USD 1 billion in 2013. The first installment was received  by Minsk last week.

The provision of the loan does very little to end the economic crisis in Belarus. Alyaksandr Lukashenka himself stated in his interview on June 17, 2011 that dollars and and Euro would not appear in foreign currency exchange offices any time soon. Moreover, in 2011 Belarus will receive only an insignificant sum from the EurAsEC.

The loan extension does not mean that something changed in Belarus – Russia relations.  Russia appears determined to privatize Belarusian enterprises. “Privatization is the main factor of capital inflow. Therefore, there are conditions, connected with privatization of property to the sum of USD 7.5 billion, i.e. USD 2.5 billion a year in the contract. This condition will be retained for sure,” said the Minister of Finance of Russia Aleksey Kudrin after the EurAsEC Anti-Srises fund meeting, where the credit extention to Belarus was approved, on June 4, 2011.

The official representatives of Russia, including Kudrin, underscore that “Beltransgas”, “Belaruskali”, and Minsk Automobile Plant should be privatized (in other words, to be sold to Russia), first of all.

The Kremlin officials believe that Belarus will be able to avoid a default only in case of selling a part of state property. Sergei Shatalov, the EurAsEC Anti-Crisis Fund Director noted on June 14, 2011 that Belarus would not receive other credit tranches, if it failed to meet its contractual obligations or announced a default.

The Belarusian authorities hold the same position on the issue of selling the industrial enterprises to Russian companies as on other issues of ‘real integration,’ as seen by Russia. Thus, the Belarusian side did not refuse to discuss the issue of concluding the Constitutional Act of the Union State in 2002 – 2004. However, it insisted categorically on signing its version of the Constitutional Act, knowing pretty well that it would never be supported by Russia.

Similarly, the authorities do not officially rule out uniting monetary systems with Russia. However, they insist categorically on their version of the alliance. Accordingly, the National Bank of Belarus must enjoy the rights of the second emission center together with the Central Bank of Russia.

Having signed the contract on getting the credit, Lukashenka and the First Vice-Premier Uladzimir Siamashka articulated again the position of Belarusian side: the state shares of “Beltransgas” can be sold only in case if “Gasprom” agrees to supply gas to Belarus at Russian domestic prices.

Apparently, among other, the position of authorities on the sale of “Beltransgas” was influenced by forecasts of expert organizations on the gas consumption growth. In particular, according to the International Energy Agency updates, the quota of gas in the global energy balance – 2035 is expected to reach 25% to be compared to 21% nowadays. The authorities believe that “Gasprom” will require the Belarusian transit facilities to meet obligations on contracts with buyers in the EU member-states after the “Nord Stream” gas pipe line is put in operation.

On June 17, 2011, Lukashenka stated he did not object to the sale of state shares of enterprises. However, the Russian party is not happy with the articulated prices at all. In particular, Lukashenka valued “Belaruskali” at more than USD 30 billion. Apart from that, the Belarusian negotiators listed other terms of sale, never to be accepted by the Russian partners. Thus, the investors were urged to retain the high employment rate, increase the tax revenues and invest in the development of their enterprises after all.

Lukashenka also doubted that Russian oligarchs would develop the purchased enterprises and fulfil their commitments to the Belarusian state. He underscored that the state enterprises worked efficiently: “Our population owns USD 20 billion. Who will buy the enterprises then? You know, who has an eye on them, don’t you? Especially, on such an effective one, as “Belaruskali”. They propose me to privatize the best assets. Nobody will have an eye on poor companies.”

Lukashenka had stated repeatedly before that the sales of industrial enterprises would have created danger to the independence of Belarus. Following his recent statements, the position remained unchanged.

Lukashenka noted that there was a number of unresolvable contradictions in relations with Russia. Thus, a  Belarusian TV propagandist Prakopau put the following question to Lukashenka on June 17, 2011: “Why does Russia pursue the unfair policy in relation to Belarus and fails to support the ally during the crisis, like the EU backs Greece?” “Don’t provoke me! I have enough of it. Everyone understands that without saying. We will survive,” Lukashenka replied.

Policy Towards Belarus: Russia is Pressing, Europe is Watching 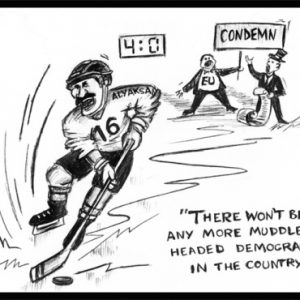 While Russia is increasing its efforts to push Belarus in its geostrategic orbit even further, Europe appears to have taken the "wait and see approach". As a result, those who wish to see changes in Belarus are losing the momentum.

Russia is pressing Belarus to obtain its most lucrative assets. The most profitable Belarusian state enterprise Belaruskali may end up in the hands of the Russian tycoon Kerimov. Russia intends to keep higher prices for energy supplies, undermining the main cornerstone of the Belarus "economic miracle" which was based on cheap Russian oil and gas. They also warned  that if Belarus further restricts Russia's media outlets it would have difficulties with securing Russian loans in the future.  Kremlin is in the process of getting nearly everything it wants.

Europe is loosing on nearly all fronts because of its passivity. Symbolic sanctions or traditional condemnations have little effect on official Minsk. Some in the European Union think that the relations with Belarus have reached their lowest point and can only grow from there.  This may not be the case because the human rights situation may further deteriorate as Lukashenka is trying to resist growing public unrest. The EU's involvement rarely goes beyond declarations, and modest support for NGOs which is far lower than in any other region of Europe.

Although Moscow is likely to wait until the Belarusian leader is on his knees and then bail him out, keeping Lukashenka on its balance sheet may become expensive for Russia.  Oil prices are high these days because of the unrest in the Arab world, but Kremlin needs money before the next election cycle. Moreover, Russia has to feed not only its impoverished South with separatism and Muslim extremists, but also other regions such as South Ossetia and Abkhazia. This is why Belarus will have to keep looking for money elsewhere. It was Russia's Finance Minister Kudrin who recommended Belarus to apply for an IMF loan a few months ago. Belarus has done so, but the changes of getting more money from the IMF look uncertain.

Given the role of Russia in Belarus, it is important to keep talking to the Russians and help them understand that if Belarus has another president, it will not be the end of the world for Belarus-Russia relations. The fear that Russian-speakers will be prosecuted if Lukashenka goes have little substantiation. Unlike in Ukraine or the Baltic States the vast majority of Belarusians in cities speak Russian as their first language and it will not change any time soon. If Belarus becomes a market economy, joins the World Trade Organization, and freely trades with both Russia and the European Union this will only help Russia's own economy.

However, talking to Russia should not be main policy tool of the West because there are nearly 10 million people in Belarus who need to be reached.  With reduction in economic subsidies from Russia, many Belarusians for the first time have seen that that their king is naked.  Public dissatisfaction grows and there appears to be no quick fix for the Belarusian economy.

The West needs to make sure that Belarusians understand why this is happening and have access to uncensored information.   It is not enough to allocate funds for Belsat or radio stations based in Poland. It is important to monitor whether what they produce actually reaches an average Belarusian.

If media only reaches opposition activists, the effect will remain limited. With some of the most proiminent Belarusian opposition leaders in prisons, frequent blockades of Internet web sites and traditionalmedia on the brink of survival, cross-border broadcasting, as in the Soviet times remain the only way to spread uncensored information.  Given that Belarus is a relatively small country, signals from neighbouring Poland and Lithuania can reach many people and help them understand what is going on.

Second, the West needs to continue supporting nation building in Belarus. One of the reasons why Ukraine is more independent now is because at some point of its history the Austria-Hungarian Empire actively supported nation building in Western Ukraine. Many historians agree that this helped mature the nation.

In Belarus the situation was different. Over the last three centuries Belarusians were regarded as Poles by the Polish and as Russians by the Russians.  Now it is in Europe's interests to help Belarus people to mature from Soviets to Belarusians. Helping them mature as a European nation would serve the long-term goal of the country's independence. On practical level, the West should set up programs to facilitate translation of movies and books into Belarusian and encourage teaching in Belarusian language – both in Belarus and at the institutions such as the European Humanities University.  If the Belarusian government is not doing that, there are good reasons for the West to takew this role.

Finally, Europe should simplify and make less expensive visa procedures for Belarusians. It is unacceptable that Belarusians have to pay 60 euro for a Schengen visa, while Russians and Ukrainians pay merely 35 Euros. Rapid impoverishment of the Belarusian population creates an insurmountable travel barrier for many Belarusians. Moreover, it is easier to get a multiple entry Schengen visa for a citizen of Russia with a population of over 140 million people fighting against Islamic terrorists  than a relatively small and safe Belarus.

Facilitation of free movement of persons would help Belarusians appreciate advantages of democracy and market economy. Coupled with ensuring better access to uncensored media, this could achieve more than yet another round of declarations from Brussels.