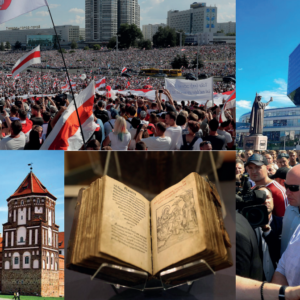 The conference will take place on 19–20 February 2021 in the online format. The Annual London Lecture on Belarusian Studies will follow the main conference panels.

The Annual London Lecture on Belarusian Studies will be delivered by Professor David Marples, Distinguished University Professor at the Department of History & Classics, University of Alberta. The title of his lecture is ‘Stalin’s Ghosts, Parasites, and Pandemic – the Roots of the 2020 Uprising in Belarus‘.

Stalin’s Ghosts, Parasites, and Pandemic – the Roots of the 2020 Uprising in Belarus

The organisers are interested in papers that discuss history, political science, political economy, literature, sociology and religious studies. Interdisciplinary studies are particularly encouraged. Selected papers will be peer-reviewed and published in the Journal of Belarusian Studies in 2021.

To submit a paper please complete this online form no later than 30 November 2020. The working language of the conference is English.

Please spread the word and use hashtag #BelStudies.

You can read more about past conferences here. For any questions relating to the conference, please email belstudies.conference@gmail.com.

Belarusian state apparatus – strong from the outside, hollow from the inside 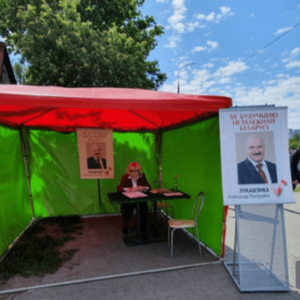 On 10 September, Belarusian police detained Dzmitry Siomchanka, leader of the ‘presidential pool’ at the state TV Channel ONT, after he expressed his opposition to President Alexander Lukashenka’s policies.

The detention is the most recent illustration of how fragile the current Belarusian government has become after the recent protest wave, as even its leading propagandists are deserting it. Besides Siomchanka, at least four other leading anchors and commentators of state TV and radio have publicly expressed their disapproval of current government policy in recent weeks.

The state system built by Lukashenka appears strong, having survived so many years. However, today the state apparatus built in Belarus since 1994 has become hollow in many respects. By sending riot police into the streets against peaceful protesters since the 9 August presidential election, the current government is trying to make up for all the other resources that it lacks. Three absent components are especially conspicuous: the absence of ideas, of loyal mass organizations and of mass media.

The current government has no sophisticated ideology – no image of a brighter future, beyond the most basic promise of “at least a USD 500-salary-per-month for everyone.” Speaking at a press conference for Russian journalists in 2014, Lukashenka confided,

I have commissioned,and I tried myself to invent, a state ideology. But I cannot say that the results touched my soul, they did not… They tell me that our ideology is the deepest patriotism. OK, patriotism… but that is clear also without ideology. What we need is inflaming stuff, which would be accepted by the entire society and which all citizens would aspire to… neither I nor my assistants have invented such a thing. Although our officials in charge of ideology believe that we have a state ideology. 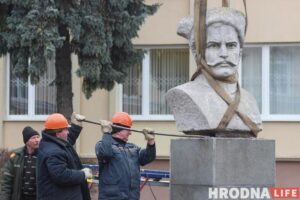 Many foreign observers note the presence of Soviet symbols in Belarus and therefore assume that Soviet ideology still plays a role in Belarus. However, these are red herrings rather than an expression of any ideological commitment. Lukashenka simply exploits some of the Belarusian population’s Soviet nostalgia. One can find no Marxism in the Belarusian regime, and there are plenty of developments which in fact allow us to paint the regime in any political colour.

For example, under Lukashenka hundreds of Soviet monuments have been silently demolished, and many scandalous cases have attracted attention. When this year a monument to Vasily Chapaev, a Soviet hero of the Civil War (1917-1923), was removed in Hrodna after a petition of local activists, this caused a negative reaction from Russia.

But even if the current leadership had some innovative ideas, it fails to deliver these to the people. It sounds odd, but Lukashenka has no media at his disposal to do so. Today, one has difficulties finding state-owned print media even among dozens of glossy Belarusian and Russian newspapers and journals on display in the state-owned Belsayuzdruk kiosks. Hardly anybody reads these today, including the main print media outlet of the government—Belarus Segodnya. To conceal this nuisance, the newspaper even manipulated its circulation figures, by arbitrarily summing up the circulation of different issues. It claims its circulation to be 402,000. In fact, its maximal daily circulation is 215,000.

The situation with electronic media is no better. Belarusian blogger Vasil Herasimchyk from Hrodna writing in Gazeta Arche noted that it is the existing system of state media, above all state TV, which, by creating a censored picture of Belarus, has discredited the image of “Lukashenka the Father.” 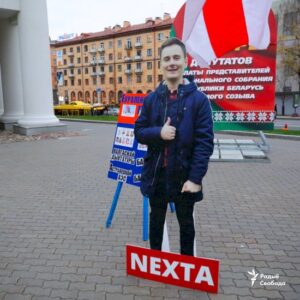 The man allegedly producing NEXTA messaging channels, Sciapan Sviatlou, came to meet his fans in November in Minsk as a cardboard figure, himself staying in Poland. Image: RFE/RL

Prominent opposition writer Viktar Martsinovich said in February 2020: “Actually, the state has only one real media now – the Telegram instant messaging channel Pul pervogo (the  pool of the first), led by Lukashenka’s spokeswoman Natallia Eismant, with limited restrictions on content.

Yet before the August presidential election dynamics set in, Pul had just 10,000 subscribers—incomparable even with anonymous, and probably Russia-linked, channel Trykatazh which back then had 17,000 subscribers, to say nothing of the NEXTA channel, allegedly led by young Belarusian Sciapan Sviatlou, with 200,000 subscribers. After the election, NEXTA Live grew to more than 2m subscribers but Pul pervogo to just over 85,000.

Besides the inefficiency of state media outlets, their loyalty is also questionable. This much became clear after the August election when Lukashenka, following the resignations of prominent personnel at state-owned Belarusian TV, brought in Russian journalists to replace them.

A lack of an intellectual basis and means to communicate with people has made Lukashenka’s regime increasingly personality-based in the three decades of its existence. Since the early 2000s, the regime has given up attempts to establish any even relatively autonomous political organizations which could support the government.

Belaya Rus’, the movement of Lukashenka‘s supporters, is not allowed to register as a political party, only as a public association. According to official information, it has about 190,000 members. Yet it failed even to collect properly signatures for Lukashenka’s presidential candidacy this summer ahead of the August election.

Opposition journalists at TUT.by news website with amusement described the very rare places even in the capital Minsk where Belaya Rus and related pro-Lukashenka organizations collected signatures for him. In the city of  Barysau, for example, with around 145,000 residents, there was only one, not widely known place, to collect these signatures – an office of Belaya Rus.

The youth organization supporting the president—Belarusian Republican Youth Union (BRSM)— looks even more absurd. Two years ago, a video filmed by a pupil of a Minsk high school was leaked onto the internet, in which teachers insisted that adolescents join the BRSM because the school needed “better statistics.” The explanation offered by the teachers to the pupils illustrates how formal this organisation is:

You shall understand that all the fees were already paid for you a long time ago [by the teachers themselves]. You are already there [in the BRSM]! We simply need your photos [for the member cards]! We will photograph you, I’ll give you these membership cards and that’s it. You live on as you wish. If you don’t want the card, I can also keep it with me. 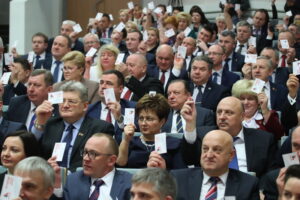 No wonder that prominent businessman Uladzimir Dzialiendzik this summer described both Belaya Rus and BRSM as “ass-licking” lackeys who failed to match the spirit of the times. He called for their dissolution. Dzialiendzik, who established the large Darida beverages company, has been closely working with Lukashenka’s government for many years and has served two terms in the parliament.

To sum up, the Belarusian regime has remained in place not because it is strong but because no convincing alternative has been offered to Belarusians. Hence, to bring about political changes in Belarus, it is useless to focus on increasing international pressure on Minsk (which Lukashenka will neutralize by making concessions to Putin and getting his support in exchange).

It is much more advisable to offer and publicize alternative visions of Belarus and mechanisms for change that can convince even public servants, including law enforcement, to join the opposition. Many of those working in the state apparatus are questioning the current policies.