A New Big Potash Deal between Belarus and China?

However, the main news came from China: on June... 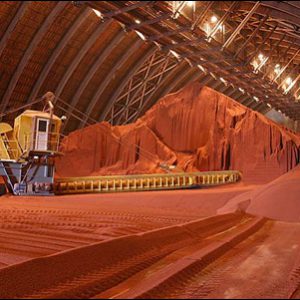 However, the main news came from China: on June 17 Belarus received a $1,4bn loan from the China Development Bank for construction of a new mining and processing factory.

The parties reached this agreement after negotiations lasting more than one year. Although Belarus and China provided no information about a new potash contract, the very fact of this loan's existence provides grounds to suggest that such deal has been concluded.

A strange and long-awaited loan

Numerous news agencies have spoken about the deal between “Belarusbank” and China Development Bank. Unfortunately, all reports are relatively repetitive and provide very scarce information about the agreements.

According to press-releases, “the agreement, signed on Friday, stipulates the procedure for financing the project of building the mining and processing factory Slavkaliy, using raw materials of the Niežynskaje section of the Starobinskaje potash salt deposit in Minsk region of Belarus”. Neither report provided any further details.

Aliaksandr Lukashenka and Slavkaliy’s owner Mikhail Gutseriev announced an ambitious construction project at the Starobinskaje potash salt deposit. Later, different sources reported that Gutseriev does not intend to invest his own assets but rely only on allocated Chinese loans.

A representative of the “Belarusbank” described the negotiations as difficult. In, they started at least in May 2015 during Xi Jinping’s visit to Belarus. Chinese mass-media reported that in exchange for China’s loan, Belarus would supply four million tonnes of potash fertilisers for a total amount of $1,3bn, i.e. around $325 per tonne.

Data: the Ministry of Finances of Belarus

Nevertheless, since May 2015 no significant loans have come from China. The table below illustrates the amount of loans received by Belarus from Chinese banks in June 2015-May 2016:

Data: the Ministry of Finances of Belarus

The data demonstrate that in spite Xi Jinping’s visit and his intention to provide Belarus with Chinese, the final amount remained far less than Belarusian authorities’ stated expectations.

It seems that China did not hasten to conclude the loan agreement. Even Lukashenka’s visit to Beijing in September 2015 and his Directive No.5, which had introduced very favourable terms for Chinese companies working with Belarus, had limited influence.

Alongside continuing negotiations, China was actively purchasing potash fertilisers from Belarus. The country managed to accumulate huge stocks of these goods in order to guarantee a large price reduction in the future.

The year 2016 witnessed the first fruits of this policy. Belarus failed to maintain the same level of revenues from potash exports to China. In the context of the economic crisis this means less negotiating power for Belarus and its readiness to agree to less favourable terms. The break-off with “Uralkali” and the arrest of its manager Vladislav Baumgertner in 2013 also contributed to this situation.

Belarus’ policy regarding potash markets in 2015 to a great extent resulted in a general potash prices reduction on the global market. Other main potash fertilisers consumers in Asia, primarily India, also tried to use the chance to obtain more favourable conditions, while the main suppliers tried to take a break in order to negotiate on higher prices.

However, because of the deepening economic crisis in Belarus and lack of foreign currency, the Belarusian authorities failed to secure much manoeuvering room. On 24 June Belarus signed a contract with Bangladesh, although the exact price remains unfamiliar to the public.

On 27 June Belarus agreed to sell 700,000 tonnes of potash to the company Indian Potash Limited at $227 per tonne, the lowest price in a decade. Usually, the first contract is signed by the major producer, while the others use the agreed terms as a benchmark for their contracts. This year “Belaruskali” has broken with this tradition.

The competitors believe that this price is unacceptably low, while the consumers expect even more favourable conditions. However, the main question concerns which decision China will take. Will the Chinese authorities follow the Indian example or are they sure that they are able to guarantee a lower price?

Have the parties already made the deal?

No one can expect a loan from China without a clear profit for officials in Beijing, particularly in the sphere of potash fertilisers. More than a year of negotiations, as well as China’s elaborated policy on the global potash market should bring positive results. The loan agreement signed on 17 June definitely contains important details which have not been revealed to the public. They remain a matter of speculation; however, a few details provide fertile ground for consideration.

First of all, the borrower is “Belarusbank”, while the finances will go to the “Slavkali”, a company owned by Russian businessman Mikhail Gutseriev. The direct interests of Belarus remain unclear.

The second point concerns the reasons which pushed China to allocate this loan. Does it mean that Belarus agreed to supply potash fertilisers for less than $200 and for a long period of time? Unfortunately, the potash sphere remains one of the less transparent businesses in Belarus. The lack of transparency results in serious failures on the global market, including the Chinese one.

Belarus and China prevent distribution of reliable information about their cooperation in the field of potash fertilisers. Due to conflicting interests, the negotiations between the parties lasted more than one year.

However, the fact that the loan was agreed upon on 17 June proves that the parties managed to conclude an agreement. The successive contracts with India and Bangladesh support this theory.

Low prices in the contract with India, desperate need of the Belarusian authorities in foreign currency and China's preparedness for lengthy negotiations suggest very low prices for Belarus fertilisers on the Chinese market.

Aliaksandr is Dean of the Faculty of Extended Education at the Belarusian State University of Culture and Arts, and expert of NGO "The Liberal Club".

Elections in Belarus: The Continuation of a New Model? 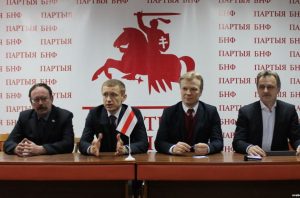 The parliamentary election campaign has begun in Belarus.

There was little protest during the 2015 presidential elections. Elections are not elections as such, but became more a self-appointment of Lukashenka through an electoral façade. Yet the elections were peaceful and the opposition called for concord during the elections.

Peaceful elections and a democratic façade allowed the EU to maintain the fiction that the Belarusian regime was changing. This coupled with the Ukraine situation allowed the EU to tolerate and work with the authorities. Will the 2016 parliamentary elections, on 11 September, continue this trend?

The Economy Continues to Fall

The collapse of the oil price has caused significant repercussions in the Belarusian economy, creating a situation where the regime cannot maintain its social contract with the populace. Belstat showed that the economy is decreasing as exports fell by 20 percent in January 2016 compared with January 2015.

This belt tightening brought on by the limping economy saw a seven percent reduction in government spending. An Independent Institute of Socio-Economic and Political Studies (IISEPS) poll emphasised public displeasure with the regime with 60 percent seeing Belarus as going in the wrong direction, 15 percent doubting that the situation will change and 47 percent blaming Lukashenka for the failure.

The economic situation remains a reason why the Parliamentary elections could maintain the same changes as the 2015 Presidential elections. Another aspect concerns the opposition.

In early January 2016 centre-right parties and associations, such as the United Civil Party, Belarusian Christian Democracy and the For Freedom movement formed a coalition. This signifies a new phenomenon, namely that a part of the opposition has united on an ideological basis. Former presidential hopefull Mikola Statkievič has begun to organise an opposition congress too.

On 21 June opposition groups, such as the Belarusian Social Democratic Party – Hramada and the United Civil Party, from across the political spectrum agreed to coordinate some efforts. Under the agreement, signatures will be collected together; candidates nominated and the parties will work together at the electoral commissions to prevent fraud. 300 candidates will be put forward for elections.

Yet, Tacciana Karatkievič and her ‘Tell the Truth’ organisation are still ostracised by most of the opposition due to their alleged cosy relationship with the regime. The Belarusian Conservative Christian Party and its exiled leader Zianon Pazniak has not joined the alliance. It rejects engaging with the regime.

Hugging the West at Arm’s Length

This has led to a strange game of cat and mouse. The EU having ended sanctions on the Belarusian regime cannot enforce them again without losing face. At the same time the Belarusian regime cannot be seen to be making baby steps towards democratisation for fear of having sanctions reapplied and so has to provide a façade of democratisation. Both sides cannot afford to blink first.

Both sides decided that the nascent relationship is worth maintaining. While the Belarusian regime will not engage in a significant evolution towards EU values, both sides know that any affiliation is better than the nonentity that existed after 2010. The EU was less vocal in 2015 than in the past on electoral falsifications and potentially it could continue this approach in 2016.

The authorities have been preparing for the elections, using them to maintain the democratic disguise, while preserving total control over the outcome. Two months is a long time and the opposition often fall out with one another. Mutual suspicion and competition for access to limited resources could end any unity.

Many predictions have been made that the Belarusian economy will collapse bringing about Lukashenka’s fall. Lukashenka knows this, and as the juggler par excellence, has survived such scenarios before. Having won the Presidential election the regime is probably safe, but with a falling economy maintaining the social contract and using coercion becomes that much harder to pay for. This weakens the regime.

The authorities have given themselves time to enhance tactics for maintaining the electoral miasma. Currently, parliamentary candidates are registering. This will last until July 7. However, the central electoral commission has until August 10 to approve candidates. Enough time to weed out candidates too independent for the regime.

Belaya Rus’ has been mobilised for its main task of collecting signatures for pro-government candidates. With the help of administrative resources it will likely return 10 times the number of signatures required, so as to emphasise public support for regime applicants. Other GONGOS like the Belarusian Republican Youth Union (BRYU), the Federation of Labour-Unions of Belarus (FPB) and the unions of women and veterans have been mobilised to increase regime control.

In the 2015 presidential elections, the Independent Institute of Socio-Economic and Political Studies calculated that Lukashenka’s actual winning vote margin was 50.8 percent, somewhat different than the official 83.5 percent.

With a collapsing economy, the authorities will find it harder to maintain elite support. With lower rents from the economy the authorities may find it harder to pay security services personnel and give other elites access to rents. However, even such obvious fraud is unlikely to lead to possible protests and violence because people in Belarus are scared of the repeat of the Ukraine post-revolution scenario.

The regime has looked for associations with other states and international organisations away from Russia fearing a possible Crimean scenario. While unlikely any encroachment on Lukashenka’s power is treated with suspicion.

However closer affiliation with the EU will mean that Belarus cannot support its economy as the EU cannot subsidise Belarus. The authorities are left with dependence on Russia. But if it stays with the shrinking Russian economy, the regime will find it harder to maintain power and elite support.

Early voting among state workers and students will be invoked. This will allow the authorities to falsify these votes ensuring the authorities of victory before the elections. However these elections are interesting for two reasons.

Firstly, to see if any opposition politicians get elected to Parliament, although such a scenario remains unlikely and secondly, to see how the regime squares the circle of maintaining proximity to Russia, while softening its stance with the EU. The juggler has yet another act to perform.

Stephen is a PhD candidate at the UCL School of Slavonic and East European Studies​ in London.