Belarus-Russia relations Belarusian language Belarusian military travel to Belarus
Why Support Belarus Digest? Donate
BelarusDigest > All > Belarus and the Outside World: From Isolation to Co-operation?

Belarus and the Outside World: From Isolation to Co-operation? 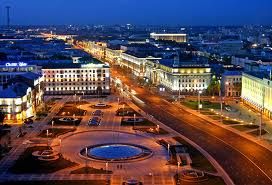 A typical summer day on Independence Square in central Minsk: Several tourist groups gather around their tour guides and listen to stories about the sights of the Belarusian capital. Very few of these tours will be held in a language other than Russian, because larger groups of tourists come only from Russia and other republics of the former Soviet Union. 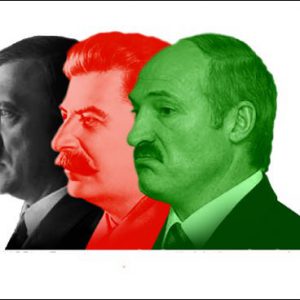 Lukashenka in line with Stalin and Hitler

Describing Belarus as the "last European dictatorship" in Western media has become a tradition. In many cases it is justified by real human rights abuses and the absence of any real democracy in the country.

However, often authors and journalists go far beyond objective analysis or describing the true situation in Belarus. They prefer to portray the country as a big concentration camp in the middle of Europe.

Typical myths about Belarus include the complete absence of free expression in the country, total governmental control and repressive terror for disobedience, and people being unable to leave the country or, occasionally, they turn to reports of Belarusians’ readiness to rebel.

Belarus Digest presents an overview of the most popular myths about Belarus in Western media and a short guide on how to avoid taking up this mythology when covering it.

The image of Belarus as a totalitarian dictatorship in the centre of Europe occasionally circulates some Western media.

"Mr. Lukashenko has steadily turned Belarus into something akin to a prison colony", – writes a journalist from The New York Times. The title of the French Le Figaro speaks for itself: "In Belarus it is better to be silent in order to stay alive."

These and other numerous exaggerated assessments certainly contribute a lot to general misunderstanding of the Belarusian political reality in the West.

In fact Belarus lives under an authoritarian personality-cult style political regime. According to human rights organisations, eleven political prisoners are serving time in jail. No elections since 1994 have been recognised as fair or transparent by Western observers.

The political opposition remains completely marginalised and has no legal instruments for influencing governmental policy. Police and the secret service keep track of political activists and prevent or disrupt almost every and any public political event.

However, the killings or indefinite imprisonment of political opponents is not a practice common to the Belarusian regime. Several cases of mysterious disappearances of notable politicians and a journalist in the late 1990s did take place, however nothing similar has happened since.

Expressing one’s critical opinion of the government, membership in an oppositional political party or movement alone is almost never used as grounds for persecution. Only persistent political activism can get people in trouble.

Freedom of speech is restricted but has been not abolished. Many reporters from unregistered media outlets indeed are subjected to serious pressure. However, several independent newspapers (Narodnaya Volia, Nasha Niva, BelGazeta, Belorusy i Rynok etc.), news agency BelaPAN, and other numerous oppositional and independent web-sites legally work within the country. Journalists from these media outlets get invitations to most public events including Lukashenka’s regularly held press conferences.

Therefore, the widely used nickname for Belarus – "the last European dictatorship" – seems quite dubious. The Belarusian political regime may be the toughest in Europe in many ways, but it is sufficiently softer than nearly any other regime in the world that has received the "dictatorship" label: North Korea, China, Saudi Arabia, Iran, Myanmar, Turkmenistan, Uzbekistan, Syria etc.

"The youth in this country, closed off from most of the world, cannot speak their minds freely and in the open", – states the EUobserver, promoting one of the most ludicrous myths about Belarus, namely, the existence of an iron curtain at the Belarus-EU border.

Belarusians can not only travel to Western countries, indeed they are some of the most active travellers. Since 2010 Belarus has held 1st place in the world for the number of Schengen visas issued per capita. In 2012 this number exceeded 700,000 (or more than 7.3% of the population). Some soon-to-be published data from 2013 will show even higher figures.

Nearly 1,400 students of EHU (a Belarusian university in exile in Vilnius) are Belarusian citizens, which means frequent crossing of the border for many of them as well as for many lecturers from Belarus.

Even key oppositional figures can (with extremely rare exceptions), freely travel to Europe and meet with Western politicians. Some experts even say that they spend too much time abroad while being passive inside the country.

Shopping-tourism to neighbouring countries has become so widespread that Alexander Lukashenka had to propose a rather unpopular and, yet not adopted measure, of a $100 exit-fee, in order to stop the vast currency outflow.

Myth No 3: Belarusians Strive For Freedom and Ready to Rebel

In a recent article to Washington Post one ex-candidate for Belarusian presidency argued that in Belarus "it is not a question of if but when Belarusians will rid themselves of Europe’s last dictatorship".

This waiting for a soon-to-come and unavoidable revolution in Belarus means, once again, ignoring the political reality on the ground.

The December 2012 IISEPS (Independent Institute for Socio-Economic and Political Studies) poll showed that only 3% of Belarusians support the idea of a revolution.

A survey done by the NOVAK Laboratory in January 2010 indicated that 62% consider themselves free, while 57% say they live in a free country. Even after the latest 2012 parliamentary elections 47.5% of Belarusians called them "free and fair" and only 25.5% disagreed with this statement (IISEPS).

In a June 2013 poll IISEPS that asked respondents what would they prefer: to sacrifice a certain amount of freedom for economic well-being or to sacrifice their well-being to be free, 46% appeared to prefer well-being over freedom, while only 38% value freedom more.

Finally, in a September 2013 IISEPS poll 28% said that Belarusians "sometimes (e.g. now) need a firm hand to rule them" and 26% believe "Belarusians always need a firm hand rule" (54% combined). Only 38% said it dangerous to concentrate all power in one individuals' hands.

Although the latest polls show that Belarusian society is slowly maturing, in reality the majority of Belarusians still prefer stability and prosperity to democracy. "Liberals" compose about 30-40% of the population, and the idea of any sort of revolution remains highly unpopular.

How to Avoid Mythology When Covering Belarus?

The author of this article, himself a journalist, completely understands his colleagues’ desire to come up with sharp titles and shocking descriptions of a poorly-covered, politically odd and almost exotic country, such as Belarus.

At the same time, the audience of serious periodicals expects facts and decent analysis rather than fantasies.

Here are several tips on how to properly cover Belarus from the outside:

Rely more on news agencies that have their own reporters in Belarus (Bloomberg, Reuters, AP).

Avoid portraying politics as something important to Belarusians. Most of them have little interest in them and are not facing the "dictatorship" in their everyday lives.

The Belarusian opposition is seriously divided, never trust anyone who claims to be "the leader of Belarusian democratic forces".

Double check all the information from political exiles with the help of activists based in Belarus.

Understand your responsibility. Belarus has little proper coverage abroad. By propagating catchy myths you disorient decision-makers who fail to work out effective policies and thus contribute to strengthening of authoritarian rule in Belarus.