The loss primarily results from Belarusian scheme of selling oil disguised as solvents, which Russia stopped back in 2012. Today, the Belarusian economy suffers...

The loss primarily results from Belarusian scheme of selling oil disguised as solvents, which Russia stopped back in 2012. Today, the Belarusian economy suffers from a real hang-over resulting from shortage of export income.

But despite political conflicts, visa restrictions and targeted economic sanctions, the EU remains Belarus’ second economic partner after Russia and the biggest importer of the Belarusian goods.

In 2012, the goods turnover made $27.1 billion. Trading with the EU has become one of the key instruments to revive the Belarusian economy. Another tool to fuel the Belarusian economy is the Russian shipment of subsidised oil. The raw materials get processed in Belarus and then re-exported to the West.

The economic cooperation between Belarus and the EU intensifies. Nevertheless, Belarus remains primarily a transit corridor for Europe, and its lack of prosperity restricts imports of European goods.

Belarus as an Oil Transit Corridor

Mineral fuels, lubricants and related materials make more that half of the Belarusian export to the EU. It is interesting that the Netherlands remain the biggest importer of Belarusian petrol, having a rather stong position on Belarus politics at the same time. 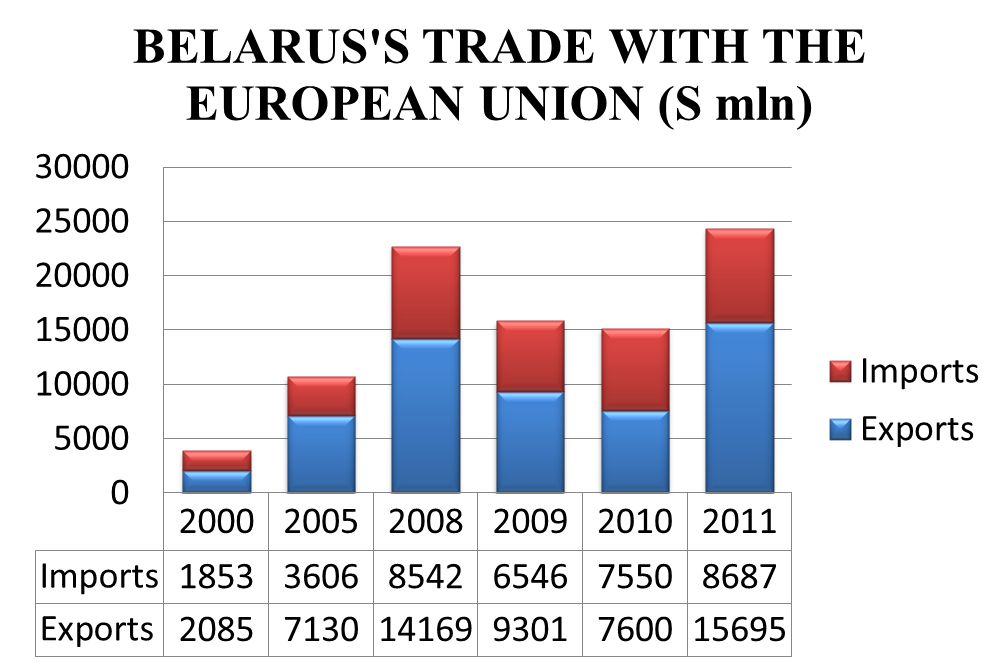 The second biggest importer in 2012, Latvia, shows a very mild approach to Lukashenka's regime. Belarus re-exported oil disguised as solvents primarily through Latvia. In 2013, the export there decreased by 87%. The business is over.

There is no big deal whether Belarus sells the Russian oil via white or grey schemes as the end result remains the same. The official Minsk strongly depends on the Russian shipments and the Kremlin’s mood, which determine the volume of shipments.

Therefore, modernisation of Belarusian enterprises looks not just as an opportunity to expand export in non-oil spheres, but also an attempt to break free from Russia. If the EU wants to be more present in Belarus, it should facilitate decrease of Belarus’ oil dependence and stimulate modernisation.
Not Just Oil

​The structure of Belarusian exports remains undiversified. Belarus’ modest level of economic development prevents it from exporting big amounts of industrial products, while the Joint Agricultural Policy limits the potential market for the Belarusian farmers.  If Lukashenka's regime fails to modernise the Belarusian economy, diversification of export will be out of the question.

The EU, in its turn, exports machinery and transport equipment (half of total export) chemicals and manufactured goods (one-third of export) to Belarus.  Germany, Poland and Italy export the most to Belarus. Although the EU’s export to Belarus remains less than the import, it is still less dependent from the outer factors and more stable with regard to high technologies in comparison with the Belarusian export.

Despite the low level of the EU’s export, European goods gained popularity in Belarus, which makes them a part of the EU’s “soft power”. German cars or Polish food products have a quality mark in the eyes of the Belarusian buyers. Belarusians would have bought more European goods if they had enough money.

The EU member states do not invest in Belarus much, with the United Kingdom and Cyprus remaining the second and the third investors in Belarus by volume. These investments often turns out to be EU-encorporated entities controlled by Russian business.

What Remains in the Way to Trading More?

In addition to export duties and other formal barriers between Belarus and the EU, low quality of the Belarusian goods and high prices for the European goods we can trace several political and legal obstacles.

The EU still has not ratified the Partnership and Cooperation Agreement, signed by the parties back in 1995, due to political reasons. Paradoxically enough, today’s economic relations are based on the “Agreement between the European Economic Community and the European Atomic Energy Community and the Union of Soviet Socialist Republics on trade and commercial and economic cooperation”, signed back in 1989.

In 2007, the EU expelled Belarus from the Generalised System of Preferences for violating the basic rights of the trade unions. The Belarusian economy lost dozens million dollars as a result. In addition Belarus is often accused of dumping practises. The EU introduced protective measures in the form of the anti-dumping duties for polyester staple fibres, solutions of urea and ammonium nitrate, potassium chloride and other goods.

If Belarus joins the World Trade Organisation, it may stimulate growth of its trade with the European Union. Today Belarus has support of Russia and China in this issue and negotiates with the European countries. The Belarusian economy’s larger opening to the world may become an interesting turn in economic relations between Belarus and the Euroean Union.

Belarus: The Great Patriotic War vs the Second World War

On 9 May the annual parade took place in Minsk to honour the victory in the Great Patriotic War against Nazi Germany. According to today’s official statistics during that war every third Belarusian inhabitant died. Nazis killed around  600-800 thousand Jews, 80% of the total Jewish population of Belarus.

Remembering the war which started in 1941, after Germany’s attack against the Soviet Union, Belarusian authorities prefer to forget that the Second World War started not in 1941, but in 1939, when Hitler and Stalin were allies.

This year state media reported thousands of people were taking part in celebratory procession on the main street of Minsk including war veterans, members of labour collectives and children. Alexander Lukashenka and his youngest son Mikalay headed the procession.

The celebrations surrounding Victory Day and Independence Day in today’s Belarus very much resembles the celebrations which took place in the Soviet Union. Military parades and procession of athletes are followed by a speech by a political leader.

Every year, depending on the foreign conjectures in his speeches, Alexander Lukashenka typically constructs an image of a foreign enemy. It could be NATO, the government of the United States, nationalists in Latvia or “arrogant European officials”. This year Lukashenka decided to speak about the threat from the West. According to him:

Sovereign Belarus is constantly at a gunpoint of the undeclared cold war. Some people in the West have not been able to accept the fact that Belarus has not become another “banana republic,” dancing to the tune of transatlantic democracies. We are stifled by sanctions. They sling mud of slander at us. Along our borders NATO warplanes are flying, new bases are opening, provocations are being plotted.

The tradition of celebrating Victory Day started in the 1960s in the Soviet Union. From that era, the Soviet propaganda machine was constructing the myth of war aimed at creating a model of a Soviet patriotism. The basic foundation myth consisted of Soviet society’s political unity, the leadership of the Communist party and heroism of the Soviet people during the war.

The Great Patriotic War vs the Second World War

The Great Patriotic War started on 22 June 1941 when the Nazi invaded the USSR and ended on 9 May 1945. Such periodisation does not include the Winter war between Finland and the Soviet Unionin 1939-1940, the Soviet occupation of the Baltic states in 1940 or the division of Poland in autumn 1939 according to a secret protocol of the Molotov-Ribbentrop pact. Nor does it address that while German and Soviet armies occupied Poland, they organised a joint Soviet-German military parade in the centre of Brest-Litovsk (today Brest), a Belarusian city near the Polish border on 24 September 1939:

The Belarusian educational system almost exclusively focuses on the period of the Great Patriotic War, conveniently forgetting that the Second World War started in 1939, not in 1941. First year students of Belarusian universities even have an obligatory course titled: “The Great Patriotic War of the Soviet People (in the context of the Second World War)”.

The course continues the tradition of Soviet historiography where only the Soviet point of view dominates. The course textbook ignores certain uncomfortable topics such as joint Nazi-Soviet activities prior to 1941, discrimination of Ostarbeiters (Belarusians taken out to Germany as forced labourers), it fails to mention the Katyn massacre or treatment of the Soviet troops of Central Europe’s civilian population in 1944-1945.

Glorification of the War in Lukashenka’s Belarus

In 2005, the year of the 60th anniversary of victory in the Great Patriotic War, in order to perpetuate the heroism of Belarusians, state authorities renamed two central Minsk streets. Francysk Skaryna Avenue, named after a great Belarusian culture figure of the 16th century became Independence Avenue (Praspekt Nezalezhnasci). Masherov Avenue named after a former Communist leader of Belarus became Victors Avenue (Praspekt Peramozhcau). Both of the two new names refer to this constructed war mythology.

The same year a new memorial Stalin Line opened near Minsk.  According to its official web page, the memorial marks a system of defence installations and symbolises the heroic struggle of the Soviet people against the Nazi invaders.

While Victory Day is a Soviet holiday, Independence Day is the second official holiday which is bound up in the Great Patriotic War. It is celebrated on 3 July and, unlike Victory Day, its genealogy starts in independent Belarus.

The authorities moved the Independence Day to 3 July after a referendum in 1996 which specifically included this question. That day symbolises the liberation of Belarus from the Nazi invaders. The previous Independence Day date was 27 July and referred to the Declaration of State Sovereignty in 1991, following the collapse of the Soviet Union.

The two most important state celebrations in Belarus – Independence Day and Victory day serve a useful purpose for the Belarusian political regime. As with many other authoritarian regimes, the Belarusian state is looking for external enemies to justify failures in economics and foreign policy.