The results of the second summit of the Eastern Partnership say nothing new about the EU policy in Belarus and in Eastern Europe. As always, the EU leadership is busy with internal problems. In light of the financial collapse... 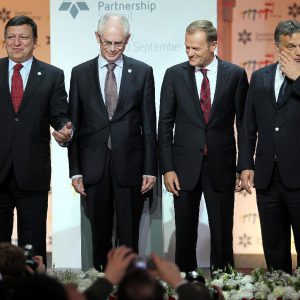 The results of the second summit of the Eastern Partnership say nothing new about the EU policy in Belarus and in Eastern Europe. As always, the EU leadership is busy with internal problems. In light of the financial collapse in Greece and the major financial problems in Eurozone countries, one should have not expected allocation of additional large sums on Belarusian issues for Eastern Partnership projects.

The host of the summit Prime Minister of Poland Donald Tusk after his meeting with representatives of the Belarusian opposition said: "From our side there will be no concessions, no gestures of any kind towards Lukashenka's regime until all political prisoners are released".

There was not much discussion at the summit about what steps Lukashenka's regime should make to normalize its relations with the EU. The EU has already got used to the thought that normalization of relations was impossible while Lukashenka is in power. The real question was about taking some very small steps to change the current situation in relations for the better to some extent.

EU President Herman van Rompuy, urging the Belarusian authorities to establish dialogue with the EU, said: "We cannot support Belarus without seeing apparent progress in regard to respect of human rights in this country, and it means immediate release and exculpation of all political prisoners".

Statements by the representatives of EU bodies and member states implied that currently the EU demands towards Lukashenka's regime are limited de-facto to the release and rehabilitation of political prisoners. It was not specified, however, what is meant under the rehabilitation.

Donald Tusk also announced at the final press conference of the summit that its participants had approved a "Modernization Package for a Democratic Belarus". The package foresees a possibility of extending grants and loans to Belarus by international institutions, investment stimulus and mechanisms for the stabilization of the Belarusian currency, and the simplification of the visa regime.

According to the Prime Minister of Poland, the EU is ready to extend up to nine billion dollars to Belarus in exchange for the fulfillment of certain conditions: full amnesty and exculpation of the political prisoners, opening of negotiations with opposition and holding the parliamentary elections in accordance with the OSCE standards.

One gets the impression that Tusk voiced the maximum demands to Lukashenka's regime, and the EU does not really believe that they can be met.

At the final press conference, the EU President also said that the release of the political prisoners was the first condition for resuming cooperation with Belarus.

Belarus' ruling elite still does not see much of a 'carrot' in the Eastern Partnership projects and other EU proposals, or anything worth pushing Lukashenka to any significant steps towards the EU and the West and intensifying the internal dialogue on expanding cooperation with the EU.

Currently, the demands of the EU to carry out democratic reforms and to hold the parliamentary elections in accordance with the OSCE standards enter are in contradiction with the interests of the ruling elite. In Belarus, the process of the carving-up (appropriation) of a significant part of state property is gaining momentum. The nomenklatura needs its own convenient laws, its parliamentarians, judges and mass media in order to keep competitors both the West and Russia out of Belarus.

The figure of nine billion dollars, announced by the Prime Minister of Poland, is so far the biggest promise from the West (if the EU is indeed ready to allocate this amount). But it is still less attractive compared to what the nomenklatura can get as a result of the carving-up of a significant part of state property.

Belarusians Forced to Work on Weekends 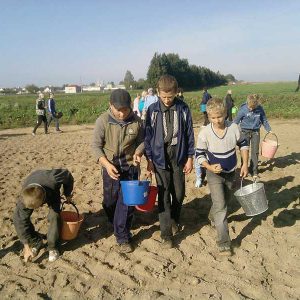 At 10 am last Saturday an official "subbotnik" began for millions of Belarusians. The word "subbotnik" comes from the Russian "subbota" and means a Saturday of unpaid work for community needs. Subbotniks trace their history back to 1919 when Russian Bolsheviks needed to mobilise workers to rebuild the country after the Civil War but were unable to pay them.

Today Belarus has no civil war but the authorities use unpaid labour on a regular basis. The official Belarusian propaganda is loud and proud that people contribute to public projects without being paid. But legal experts and human rights activists are unimpressed. They call subbotniks forced labour which is prohibited by Belarusian and international law.

This month the official news agency Belta announced that as a part of the subbotnik campaign it will be necessary to prepare for the coming winter, fix the roads, refurbish yards, and make residential houses warmer. Using various administrative measures the state hopes to make millions of Belarusians work without paying them.  Last April over three million people participated in subbotniks all over Belarus.

When the subbotnik day comes, instead of resting on Saturday, employees have to perform their normal work duties or other tasks such as cleaning the streets. Although their salaries are calculated they do not get any money. All earnings are transferred to local executive authorities. They use these funds for various public projects such as building a giant library in Minsk, a new World War II museum or even a nuclear power plant.

The idea of voluntary work may sound noble, but very few are eager to sacrifice their day off and work for free. Since 2003 official regulations related to subbotniks specify that the work should be voluntary. In practice, most people have no choice whether to perform the "voluntary" work or to stay home. Employers, usually state-owned enterprises, order employees to work on Saturdays without even trying to package it as a recommendation.

In some cases employers provide specific sanctions for failure to volunteer. For instance, on 25 June 2011 management of the state enterprise Mogilevenergo ordered its employees to "volunteer" to clean the streets. Employees had been also warned that non-participation in the cleanup activities would be treated as truancy.  The money earned in that particular subbotnik was earmarked to build the first Belarusian nuclear plant.

Belarusian authorities also happily embraced another Soviet tradition – unpaid agricultural works. At least once a year they request students from state universities and sometimes school children to perform agricultural works for a symbolic payment or no payment at all.  Otherwise the students may be threatened with losing their places in subsidised dormitories or may face problems during their examination sessions.  Belarusian weekly Nasha Niva reported that last month even eleven-year old school children were taken to collect potatoes during their study time.

Many legal experts think that these subbotniks and agricultural works constitute forced labour. The work is unpaid and there is usually a sanction for failure to volunteer. The International Labour Organisation regards prohibition of forced and child labour as a cornerstone of international labour law. The Belarusian Labour Code also prohibits forced labour and working on days off without an employee's written consent. It is not permitted under Belarusian law to request performance of works not specified in labour contracts such as cleaning the streets. But when courts are not independent these rules remain dead letters.

Neither Belarusian trade unions nor the international community can do much to influence the Belarusian authorities. In 2006, the European Union even introduced economic sanctions for violation of freedom of association in Belarus and repression against independent trade unions. But these economic sanctions were quickly matched by additional economic subsidies from Russia and the campaign against unions continued.

The threat to subbotniks and other forms of forced labour may come from another direction. As the economic crisis deepens, Belarusian authorities are under increasing pressure to privatise state enterprises. Although they resist privatisation and try to delay it for as long as possible – significant chunks of property have already been sold. Once the majority of companies in Belarus are no longer state-owned, it may become more difficult for the authorities to make people work for free.