Belarus Foreign Policy in 2013: All Quiet on the Western Front

On 27 December, Minister of Foreign Affairs Uladzimir Makei held an event with journalists, diplomats and analysts to reflect on a controversial year for Belarus' foreign policy.

Though Belarus was tough in the potash war, this conflict exposed the...

On 27 December, Minister of Foreign Affairs Uladzimir Makei held an event with journalists, diplomats and analysts to reflect on a controversial year for Belarus' foreign policy.

Though Belarus was tough in the potash war, this conflict exposed the weaknesses of Lukashenka's regime and its dependence on Russia. Belarus still has not resumed shipments of fertilisers at previous levels. At the same time, Russia has relocated several fighter jets in Belarus and is pushing hard for the sale of Belarusian enterprises.

The authorities have failed to obtain a considerable sum of money from the European Union in exchange for the release of political prisoners, so the Belarus-EU remain in limbo. Trade between the partners shrunk, and the negotiations on visa liberalisation are still waiting to begin.

The authorities made progress in establishing relations with developing countries such as China or Azerbaijan, but the usefulness of these relations remains vague. However, the authorities will try to develop a new vector and diminish its dependence on the West and the East without hesitation.

The potash war has become the most controversial event in Belarusian-Russian relations in recent history. The collapse of the Belarusian Potash Company, and subsequent arrest and criminal proceedings against Uralkali's CEO Baumgertner received coverage in most Western specialised media.

However, this war does not provide a realistic picture of relations between the countries. This year, with the exception of the conflict surrounding Belaruskali and Uralkali, the Belarusian authorities continued to drift into the arms of the Kremlin. One example of these growing ties was Russian Su-27P fighters being relocated to an airfield in Baranavichy and starting active combat duty on Belarusian soil. Although the officials have criticised Eurasian integration it seems that they are reluctant to oppose it and will deepen their ties until Russia decides to close the gas and oil valves.

Moreover, Russia continues to support the Belarusian economy and even promises to provide new loans. Through an agreement reached between the parties, Moscow will provide Belarus with oil, but only in the first half of 2014. However, Russia requires implementation of several integration projects and at least the partial sale of the Minsk Automobile Plant, Minsk Wheel Tractor Plant and HrodnaAzot, a Belarusian chemical enterprise. Should Belarus refuse to to do, it is likely that the Kremlin will limit its supply of oil in order to put pressure the Belarusian authorities.

Preserving the nation's independence remains the main task of the Belarusian authorities in the relations with the Kremlin, as the political, economic, military dependence of Belarus on Russia this year has further increased. The Russian leadership is looking down at Lukashenka's regime and gradually is achieving the transformation of the Belarusian authorities into their vassals.

All Quiet on the Western Front

This year could have become a breakthrough year in relations between Belarus and the EU. Belarusian diplomats held numerous meetings with Western diplomats trying to find an opportunity for dialogue. Minister of Foreign Affairs Uladzimir Makei and his deputy, Elena Kupchyna, have been in Vilnius, Brussels and Paris, while Prime Minister Mikhail Miasnikovich visited Lithuania.

The European Union was, for its part, more inclined towards carrying out a dialogue than Belarus was. Western diplomats invited the Belarusian authorities to the Eastern Partnership summit, but Lukashenka’s regime remains reluctant to release political prisoners. Prisoners of conscience remain a stumbling block for mutual relations. Lukashenka`s regime expects a more generous financial offer from the EU, which would help to counterbalance Russian influence.

Belarusian trade with the EU countries has decreased compared to the previous year by about a quarter. Over 10 months in 2013 Belarusian exports to the EU shrunk by 42.7%. This is due, in large part, to a reduction in the export of solvents.

Readiness to start negotiations on visa liberalisation remains the only positive statement by Belarus. However, the authorities may delay the process. Lukashenka`s regime will use these negotiations to show Belarusian people that it has legitimacy at the international level.

Lukashenka's regime reasonably established relations with developing countries, however, these visits have born little fruit. For example, relations with China, raised this year to a level of strategic value, though these new ties work primarily for the benefit of China, not Belarus. For example, Chinese loans are packaged to other deals that benefit China and have led to an increase in external debt.

Earlier this year, Hugo Chavez died, sparking fears that crisis awaits Belarusian-Venezuelan relations. In fact, this is precisely what happened. Trade turnover between two countries dropped significantly: in 2012 it was nearly  $ 600m, in the first half of 2013 it was only $ 68.9m.

Relations with Ukraine remain difficult for both parties. On the one hand, the countries face constantly increasing trade, Lukashenka seemed to support Ukraine's signing of the Agreement of the Association with the European Union. On the other hand, the countries often carry out trade wars against each other with petroleum, milk of alcohol products.

Belarus and Ukraine try to limit supplies of these products from each other in order to increase the consumption of their own products. After Ukraine turning its back on the EU, both countries became competitors for Russian money, which means that Belarus stands to lose its position as the last bastion of Russia in Europe — a position which helps them to get money from the Kremlin. ​

Contact with the countries such as Azerbaijan and Indonesia can be important for for Minsk Automobile Plant or Belarus Automobile Plant. However, in and of themselves, they do not make a difference to the overall foreign policy of Belarus.

Next year, the Belarusian authorities will open new diplomatic missions in nine countries such as Qatar and Mexico. Lukashenka's regime relies on the development of relations with other vectors, except the West and Russia. The proposals thus far from these new vectors have done the regime much good. As Lukashenka famously said in 2009 that Belarus “need to go to other places, where no one knows us and they are waiting for us.” 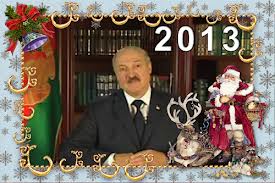 Belarus did not have a major political campaign – an election or referendum – in 2013. Therefore, the political actors focused on preparations for the upcoming elections in 2014 and 2015. The authorities introduced a number of amendments to the Election Code and the opposition dealt with the issues of electing a single candidate and developing a winning strategy.

The Politics of Modernization

In 2013, Belarus lived under the slogan of modernization. The word came to every house and almost every state-run enterprise through prolific media propaganda and immense government funding. During his annual address to the nation, President Lukashenka explained what stood behind the modernization rhetoric: after Russia’s WTO accession Belarusian producers faced harsher competition on the domestic and international markets. Modernization should, therefore, improve their competitiveness.

Lukashenka also spelt out the political modus operandi of the proclaimed modernization: he would personally preside over the process and hold all controlling strings in his hands. He even hinted that the modernization would target the overblown social state by gradually departing from state paternalism.

Further developments of the year demonstrated that much of the modernization effort turned into real institutional waste, which, among other things, raised questions about the political prospects of the campaign. Especially, in the face of the 2015 presidential election.

Reform That Does Not Reform

Another grand project of the Belarusian authorities took place in the realm of public administration. After long internal discussions, on 12 April 2013 the president signed Decree No.168 that aimed to optimise the state apparatus by cutting a quarter of the bureaucrats.

The official justification went that the reductions would allow the government to raise salaries for the remaining officials, thus, motivating them to work more efficiently. Besides, the authorities aimed to stop the drain of civil servants into private sector (in Belarus and Russia) by improving their work conditions.

Importantly, Decree No. 168 was publicised under the name of a public administration reform. However, it failed to go beyond mere reductions and failed to actually reform the existing system of public administration. In particular, it failed to tackle its most fundamental problems: excessive and overlapping functions, non-transparent decision-making and untamable corruption. Also, the decree ignored another emerging weakness of the Belarusian “power vertical” – slow generation change and growing gerontocracy.

At the end of the year the problems of ineffective public administration and officials drain became so obvious that Alexander Lukashenka even had to resort to quite extraordinary measures in an attempt to breathe in new life into his governance model.

The worsening state of the economy in 2013 pushed the authorities to design new tools to top up the budget. At times, they exhibited uncanny creativity.

One idea came from Lukashenka himself. He suggested introducing a new tax – an exit fee. According the idea, those Belarusians who wanted to go abroad and do the shopping there had to pay a $100 fee when crossing the border, because “you can buy stuff in Belarus”.

Another striking idea originated in the ministries of finance and labour and social protection – a tax on the unemployed. The intention was to collect about $280 from each Belarusian citizen employed in the shadow economy or working abroad.

The media and civil society quickly demonstrated massive disapproval of the two initiatives. For instance, dissatisfied citizens launched an Internet petition against the exit fee that received almost 27,000 signatures.

Like the Stop Gasoline campaign in 2011, these became the brightest examples of civic action in the Belarusian authoritarian realities in 2013. As a result, the government had to back away from their plans. Lukashenka even publicly repudiated the idea of an exit fee and mocked the government’s activities to put it into practice.

Yet, another unpopular innovation – an automobile tax that makes all car-owners pay $15-100 a year – was passed by the parliament at the end of December 2013. A series of protests followed but failed to grow into something big. With all probability, President Lukashenka will sign it into a law already in 2014.

The Belarusian opposition spent another year in intensive discussions about ways to unite and to find more popular support. The year of 2013 saw the formation of two opposition coalitions – the People’s Referendum and the For Free and Fair Elections for a Better Life “Talaka”.

Unlike in previous years, the two opposition blocks united on the grounds of different strategies on how to change the incumbent regime rather than on ideological affinity. While the People’s Referendum declared that it would focus on the bread and butter issues to raise its electoral ratings, “Talaka” decided that the only way to transforming the political system was through free and fair elections.

In 2013, the opposition again devoted much of their time to debating ways to unite and elect a single presidential candidate for the 2015 elections. The differences of approaches also went along the dividing lines of the two alliances. The People’s Referendum prefers to hold a congress to elect a single candidate and Talaka argues in favour of primaries.

Remarkably, even on this background opposition leaders in general remained more engaged in the international arena rather than at tome. And their political communication with the domestic electorate looked unsatisfactory.

And the authorities used the last year, which had no electoral campaign, to prepare for future battles – in particular, the 2014 local elections and the 2015 presidential race. Based on the lessons of the 2012 parliamentary elections, they introduced new amendments to the Election Code.

The amendments prohibit campaigning for a boycott, establish a new level of election committees and change the way candidates can fund their campaigns. Another novelty specifically affects parliamentary elections: they will now run according to the first-past-the-post model when a simple majority wins the election.

The opposition and independent observers quickly concluded that the amendments would make it even easier for the authorities to falsify the upcoming elections.