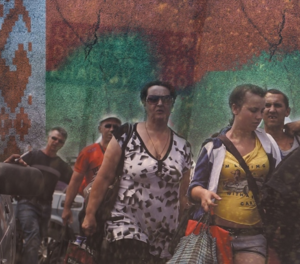 The numbers of the asylum seekers from the Middle East in Belarus remains rather modest, as Belarus is difficult to reach and is not a particularly wealthy country. On the other hand, Belarus remains an attractive option for Ukrainians, who can easily integrate into the Belarusian society. As a result, Belarus was able to boast a controlled and regulated migration process.

Belarusian legislation tries to keep up with adapting to the possible new challenges, unifying procedures and regulations for handling refugees and migrants. However, recent statements by the Belarusian officials also indicate that rising security concerns might dominate the refugee politics agenda in 2016.

With the highest numbers of Ukrainian migrants per capita in 2015, Belarus had to adapt to the new migration trends in the region. Ukrainian citizens from the Donetsk and Luhansk regions enjoyed preferential treatment from the Belarusian state. Simplified procedures for temporary and permanent residence applications helped to expedite formalities for migrants from eastern Ukraine.

The overall number of Ukrainians who came to Belarus since the start of the conflict in south-eastern Ukraine lies at around 150,000 persons. This figure includes refugees, economic migrants, and people with family ties in Belarus, who potentially could soon apply for citizenship. This category of migrants demonstrates high degrees of adaptability and integration due to cultural and linguistic closeness.

As of December 2015, 46,000 Ukrainians have already secured permanent resident status in Belarus. Overall, by the end of 2015, 180,000 foreign nationals (making up less than 2% of the total population of the country) held Belarusian permanent residence status.

Nearly 1,200 persons applied for refugee or complementary protection status in Belarus in 2015. Ukrainians accounted for the majority of the refugee status applicants (75%), while the number of applications submitted by the Syrian citizens remained below 10%.

According to the Belarusian Ministry of the Interior, the country saw a sharp rise in the number of refugee applicants in 2014 and 2015, even though it is not the preferred destination for displaced people seeking better life. Ukrainian migrants tend to choose the path of becoming temporary or permanent residents, rather than applying for asylum. 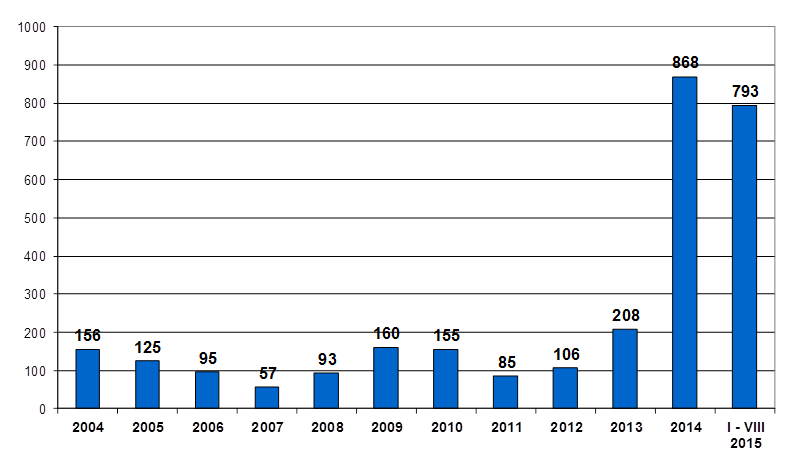 While Belarusian authorities continue to prioritise Ukrainian migration, they do not exclude the possibility of the growing number of refugees of other nationalities. Yet according to BelTA, only 20 Syrians received refugee status in Belarus between 2013 – 2015. By September 2015 this number grew, and about 40 Syrians held complementary protection status in Belarus.

The UNHCR Representative in Belarus, Jean-Yves Bouchardy, does not expect millions of Syrians coming to Belarus. He suggests that numbers will continue to grow steadily, yet within the current Belarusian trends.

In 2016 the authorities plan to grant refugee status in Belarus to 1,200 persons, to be settled across various regions of the country. “Our competent organs check every person, who is admitted to Belarus. Families are our priority,” said the Belarusian president.

For instance, the Ministry of the Interior and the UN sponsored three Syrian families' arrival and accommodation in Belarus. Reports in the media tend to focus on a few Syrians, currently residing in Belarus. On the one hand, they target to create a positive and competent image of the state policies, while on the other hand, they also emphasise expected integration of the newcomers.

Similarly to the European societies, Belarus has the problem of an ageing population. Belarusian president admitted that migration appears to be the natural solution of the demographic issues. At the same time, he also noted that sudden unregulated influx of migrants can potentially result in growing security risks and discontent among the local population. “We are not about to start playing democratic games in these issues,” the president stated resolutely. 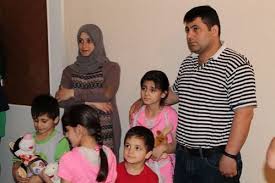 Recent migration-related tensions in Germany made Belarusian authorities acutely aware of the dangers of the insufficient control over who is allowed into the country. “We should take into account experiences and issues, which the EU states face currently,” noted deputy Interior Minister Mikalaj Mielčanka.

In terms of security concerns Mielčanka warned about the possible liabilities in the unguarded large section of the state border to Russia. However, according to the Belarusian Department of Citizenship and Migration, annual numbers of illegal migrants detained in Belarus keep steady between 500 and 1,000 persons.

The Belarusian Parliament recently discussed several amendments to the law on forced migration to facilitate the process of applying for refugee status, asylum, and complementary protection. Designed to decrease the application processing times from 18 to 6 months, new regulations aim to limit the time that foreign nationals spend in Belarus and make use of its social system, while awaiting the decision on their cases.

Further, amendments foresee situations of the mass arrival of refugees to Belarus, incorporating the European experiences. They specify which state institutions are in charge of compulsory fingerprint registration, medical exams, and identification of the persons.

In all likelihood, global security concerns will define and dominate the refugee agenda in Belarus in 2016. Internally, recent amendments of the legislation assure Belarusians that the authorities have possible increases of the migration streams under control.

On the other hand, strict refugee quotas, the existing visa regime, and its geographical location, placing Belarus on the periphery of the main routes to the more prosperous EU, suggest that it should not fear mass arrivals of asylum-seekers.

What Is at Stake in the Small Traders Protests? 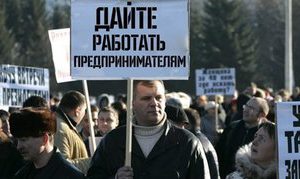 On 1 January 2016, a new edict came into force in Belarus demanding that small traders who sell imported goods must provide details of their origin.

The edict was based on laws for small traders introduced by the Eurasian Customs Union that came into effect in January 2013. As a result, most outlets selling light industrial goods have closed.

The traders held an “anti-crisis forum” at the Hotel Belarus’ on January 11, but to date the government has refused to rectify the situation. Moreover, the impasse seems likely to continue at least until the convocation of the next Business Forum on January 25.

While the difficulties for such forms of business in Belarus date back more than a decade, the current conflict represents the most serious dilemma to date for both the authorities and small traders.

The bill requests that traders selling imported goods — mostly from Russia — must provide certificates indicating their origin. Traditionally, Russian exporters have either declined to provide such information or fabricated it. The government’s stated goal to procure transparency in trade masks a larger concern that cheap imported goods undermine the sale of Belarusian products. In turn, the traders insist that the quality of local manufacturing is both inferior to and more expensive than imports. 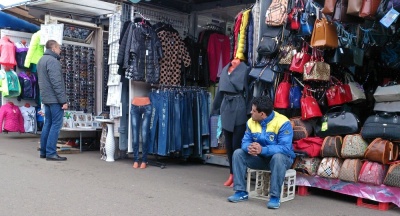 The mass desertion of their market stalls clearly surprised the authorities, and the Ministry of Trade acknowledged that 68% of outlets had remained closed, which it attributed in official parlance to the holiday season. Yet according to the head of the business association Perspektyva, Anatol Šumchanka, 90% of traders nationwide abandoned their businesses during the holiday season, which is normally their peak period for sales.

The president of Belarus, Aliaksandr Lukashenka, made reference to the stoppage of sales on January 14 at a meeting related to the protection of the state border. He noted that advance warning of the decree was given last year to self-employed small traders and commented that he was puzzled by recent events.

Decree 222, he added, constitutes the first step in trade transparency, thus implying that more measures would follow. For the president, the struggles of the state sector in the current dire economic climate remain the priority and thus traders must sell homemade products.

An estimated 1,500 small traders attended the anti-crisis forum held at the Hotel Belarus, with a further 800 gathering outside in the foyer. Šumchanka addressed the assembled and complained about the lack of prior consultation of the new decree. He stressed that traders do not oppose the certification of goods, but the authorities introduced the laws without consultation.

Šumchanka cited a former judge of the Constitutional Court, Michail Pastuchoŭ, who analysed Edict 222 and reached the conclusion that the document illegally restricted the rights of citizens. Šumchanka​ proposed the gathering of 50,000 signatures to introduce a new law into Parliament on behalf of the traders to create more favourable conditions for small businesses. 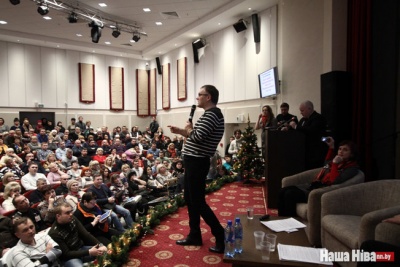 Perhaps unsurprisingly some participants wanted more direct action and in the foyer Minsk trader Aliaksandr Makajeŭ called for a mass protest at October Square on January 16.

Šumchanka​, however, who highlighted the campaign on his Facebook page (Anatoliy Shumchenko), responded angrily to what he perceived as the attempt to politicise the protests and commented that radical actions would not bring the desired results. At the same time, Miaškoŭ​ provided an overt warning that traders would be held responsible for “violating established working hours” should they fail to report to work the next day. The vast majority ignored the threat.

Could the protest widen?

Šumchanka referred to political activists as “scum” and “provocateurs” who should hold their own events, but some political activists perceived the dispute as a potential for more coordinated anti-government actions, perhaps based on Šumchanka’s own estimate that the new decree encompasses potentially not merely 37,000 individual traders, but also over 120,000 businesses operating in shopping centres and as private companies.

The gathering at the Hotel Belarus also comprised delegates from all parts of the country, indicating the breadth of the protests. The leader of Perspektyva believes that the government logically must come to an agreement with traders who have no alternative but to oppose a law that undermines their very livelihood.

Opposition leader Mikalaj Statkievič provided an interview to Belsat TV on the same day as the Anti-Crisis Forum. He made it clear that if the authorities failed to respond to demands of ‘democrats’ for electoral reform, they should be prepared to gather “in the Square” in order to “maintain dignity” and demonstrate their willingness to fight for their rights.

Street actions, in his view, remain the sole mechanism to influence the authorities. He revealed that he is preparing a group of 150-200 committed and “courageous” people who are prepared to lead street rallies. The call for confrontation contrasted with the milder approach of Šumchanka​, who although equally dismissive of the government’s responses to date, still holds out the hope of reaching agreement.

A time for compromise?

The dispute between the government and small traders carries potential for broader protests, especially given the dilemmas of large companies who are cutting the workforce and dealing with high costs of imported materials.

Moreover, an immediate solution appears unlikely as the suppliers of the imported goods refuse to provide documentation of their origin. Such trade originated in Soviet times and constitutes an essential mechanism for supply of consumer products in a command economy. And while the majority of small traders in Minsk on January 11 seek economic rather than political solutions — such as a change of government — their frustration is evident.

Belarus can ill afford a sustained mass protest given the forecasted sluggish GDP growth of 0.3% in 2016 — a prediction itself based on a highly implausible oil price of US$50 per barrel. A wise government would consider a compromise solution.