Earlier this month, Aliaksandr Lukashenka noted that, during his presidency, the Belarusian prison population has halved. He stressed that despite its dictatorship label, Belarus does not “throw everyone in prison.”

Statistics present a more complicated picture, however. During Lukashenka’s first... 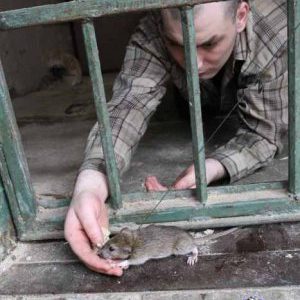 Earlier this month, Aliaksandr Lukashenka noted that, during his presidency, the Belarusian prison population has halved. He stressed that despite its dictatorship label, Belarus does not “throw everyone in prison.”

Even though frequent amnesty laws are slowly decreasing its prison population, Belarus to this day has one of the highest shares of prisoners per capita in Europe.

Amnesty laws also provide no lasting solution to the country's high rates of recidivism. Because every second crime in Belarus is committed by a former prisoner, deeper changes to the penitentiary system are needed.

Improving conditions in prisons and reintegrating former prisoners into society are key to reducing the prison population in the coming years.

Why So Many Citizens Serve Prison Sentences

In 2002, Belarus placed third in the world in the number of prisoners per capita, after the United States and Russia. Currently it ranks 25th in the world and second in Europe.

In May 2013, the country had 31,270 prisoners, or about 325 prisoners per 100,000 people; in Western Europe, the median rate is just 98. And this is after having reduced its prison population by more than half since 1998, according to the International Centre for Prison Studies. Clearly, Belarus still has a long way to go. 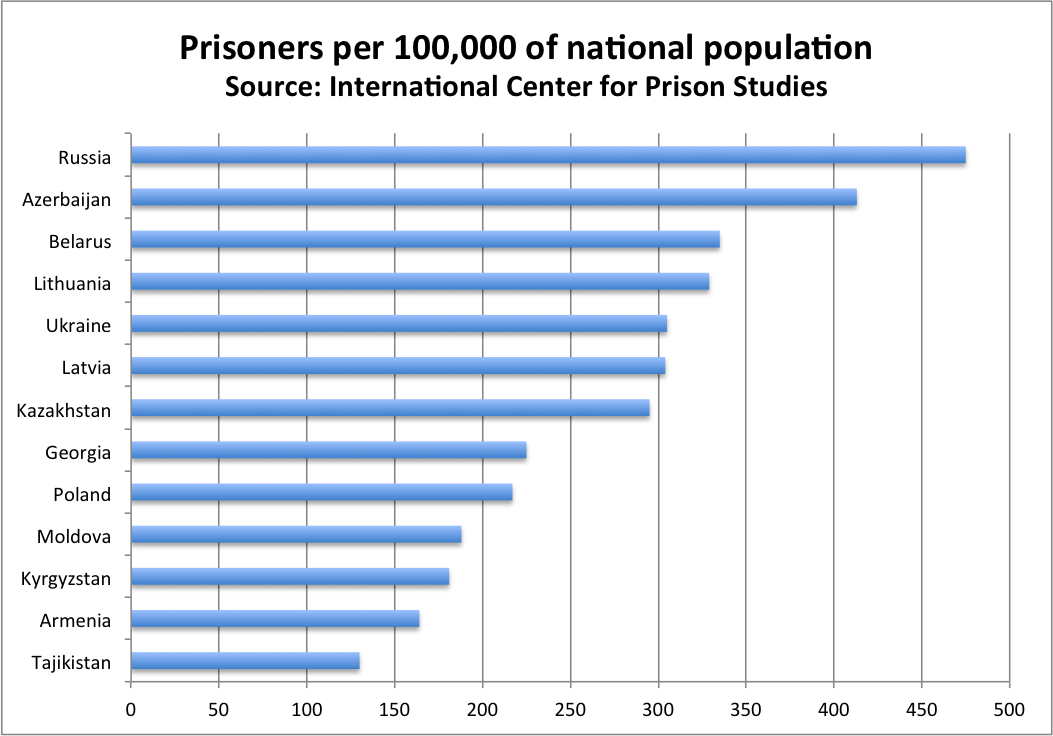 Why do so many Belarusians go to jail? After all, Belarus's crime rate is not any higher than in other post-Soviet states.

One reason may be the lack of due process. Being charged almost always results in being found guilty. Belarus's likelihood of acquittal (0.3% of all sentences) is even lower than in Russia (3%) and much lower than in Europe as a whole (6%).

Another reason may be the long-lasting consequences of the surge in incarceration rates during Lukashenka's first term as president. Belarus experienced a nearly 350% increase in the number of prisoners in the 1990s, by far the largest change in the post-Communist space. Many of those imprisoned then have not been released. 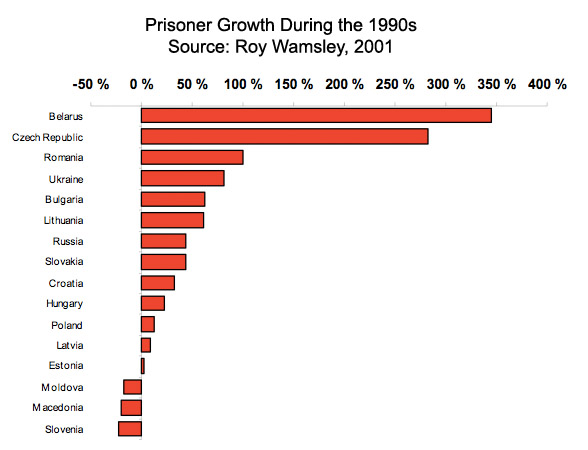 To be sure, Lukashenka's zealousness alone does not explain the early incarceration spike. Larger macro-economic forces, unleashed by the dissolution of the USSR, led to profound economic and social uncertainty.

Most post-Communist states responded to rising criminality by increasing pre-trial detention and imprisonment rates and by imposing harsher sentences.

In Belarus, however, the spike in imprisonment was the most dramatic. What is more, its effects have persisted to this day – due not only to the challenges of reducing the prison population, but also to the extremely high rates of recidivism.

Belarus's preferred approach to reducing incarceration rates has been passing amnesty laws. Nearly 10,000 prisoners were released or received shorter sentences under the most recent June 2014 amnesty.

This was the 13th amnesty in Belarus’s independent history, dedicated to the 70th anniversary of the Belarus’ liberation from the German occupation. Previous amnesties were timed to the 65th, 60th , and 50th anniversaries of victory in WWII.

Belarusian amnesty laws generally cover prisoners who committed relatively minor crimes, have young children, as well as pregnant, underage, elderly or disabled prisoners. As a rule, amnesties do not extend to political prisoners. However, Ales Bialiacki, the vice-president of the human rights organisation Viasna and one of the best known political prisoners, was released under the 13th amnesty in June.

In Belarus, amnesty is used for political purposes. It signals that the government takes an uncompromising stand against corruption or drugs. This is why Lukashenka frequently repeats that no amnesty will ever cover offenders charged with corruption.

Amnesty also signals the state's willingness to forgive and empathise with its citizens. Indeed, Lukashenka has emphasised that amnesty laws serve the society and are always “free of politics.”

How to Reduce the Number of Belarusian Prisoners

The Belarusian authorities are currently drafting a law that seeks to reduce incarceration rates and change important aspects of the penal system.

The draft law will allow defendants to reduce prison terms by cooperating with the investigation before the onset of trial. The authorities hope that this measure will not only reduce the size of prison population, but also facilitate investigation.

The law also envisions replacing imprisonment with monetary compensation for some types of crimes and decriminalising some behaviours completely.

Even as Belarus sought to reduce the number of future prisoners, it has devoted little effort to improving lives of the current ones. This is important because so far Belarusian prisons have done more harm than good: repeat offenders commit about 50% of all crimes in Belarus.

Recidivists commit every third murder, two thirds of all robberies, more than half of all other forms of theft. Most of them break the law already in the very first year upon leaving prison. Furthermore, in the last seven years, recidivism has increased more than two-fold.

Prisoners Need to be Reintegrated 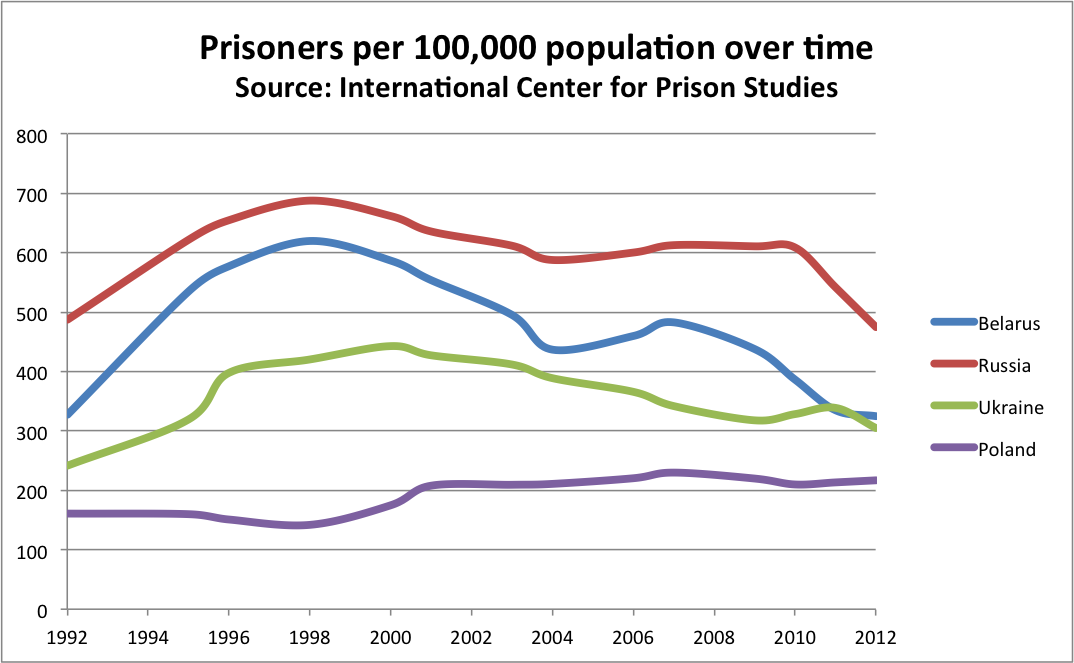 High recidivism may be partly due to the dysfunctional prison culture in Belarus. Wardens beat and humiliate prisoners.

Last year, political prisoner Mikalaj Aŭtuchovič cut his abdomen in protest to the abuse by the prison administration.

Living conditions in prisons are deplorable. Single cells do not exist, and prison overcrowding is a problem. This produces a lot of diseases.

An even larger problem, however, is the failure to integrate the released offenders back into society. Unlike west European nations, Belarus has not developed an adequate system of post-penitentiary integration.

Last year, the first reintegration project was launched with the help of a 300,000 Euro grant from the EU, as well as the technical guidance by the international Federation of the Read Cross and Red Crescent.

The project seeks to provide psychological, legal, professional, medical, and humanitarian help to the former prisoners. It will begin work with prisoners half a year prior to their release and only interested prisoners will be participating. Currently only three penitentiary institutions, all in Mahiliou oblast, are participating, with about 120 prisoners.

Turning prison from crippling into corrective institutions is a difficult but necessary task. While recidivism cannot be completely eliminated, reducing it will improve not only the lives of prisoners but also potential victims and is a less costly alternative to keeping offenders incarcerated. 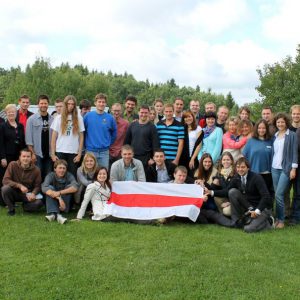 Belarusian youth studying abroad have three days left to send their applications to participate in the annual Rally of the United Students of Belarus, which will take place in Lithuania on 1-5 October 2014.

Young people studying abroad and in Belarus will meet for the eighth time to exchange contact information and share their academic and personal experiences.

Since 2007 the project has become the largest group of alumni of young Belarusians living abroad. The rally offers a chance for informal and formal ideas to be presented about the future of Belarus.

During recent years, Belarus has become a country of young emigrants and this trend is set to continue. The United Students of Belarus link these people together and can play a big role in the future of the country, including potential future changes in the political establishment.

The Vilnius-based Eastern European Studies Centre, based in Vilnius, serves as an organiser of the event.

Need for a Common Platform

It would be fair to call Belarus a country of emigrant students. Belarusians have a university in exile – European Humanities University, and a large number of scholarship programmes exclusively for Belarusians that help they study abroad.

The Kalinowski Scholarship and the ​​European Scholarship Scheme for Young Belarusians remain the most prevalent in terms of the size of their programmes. The first programme offers education for youth that have dealt with repression, while the other is for all Belarusians. Moreover, thousands of Belarusian students receive education through smaller schemes, college scholarships, or pay their own way.

The number of Belarusian students abroad, by all indicators, will only increase in coming years. According to a survey by the Belarusian Institute of Strategic Studies, only 13.7% of young Belarusians do not want to leave the country to study or work. Many remain reluctant to return to Belarus as they do not see any prospects for themselves.

This is why the United Students of Belarus remains the only inclusive platform for Belarusian students and graduates abroad. Besides USB Rallies, alumni of Kalinowski Scholarship or graduates of British universities organise meetings now and then, but these events lack regular gatherings and remain rather exclusive events.

In comparison, Ukraine has dozens of such associations of professionals who have been educated in the West. Ukrainians usually integrate into clubs of university graduates, like the Harvard Club of Ukraine or the Association of Fellows, or as alumni of the Fulbright programme. 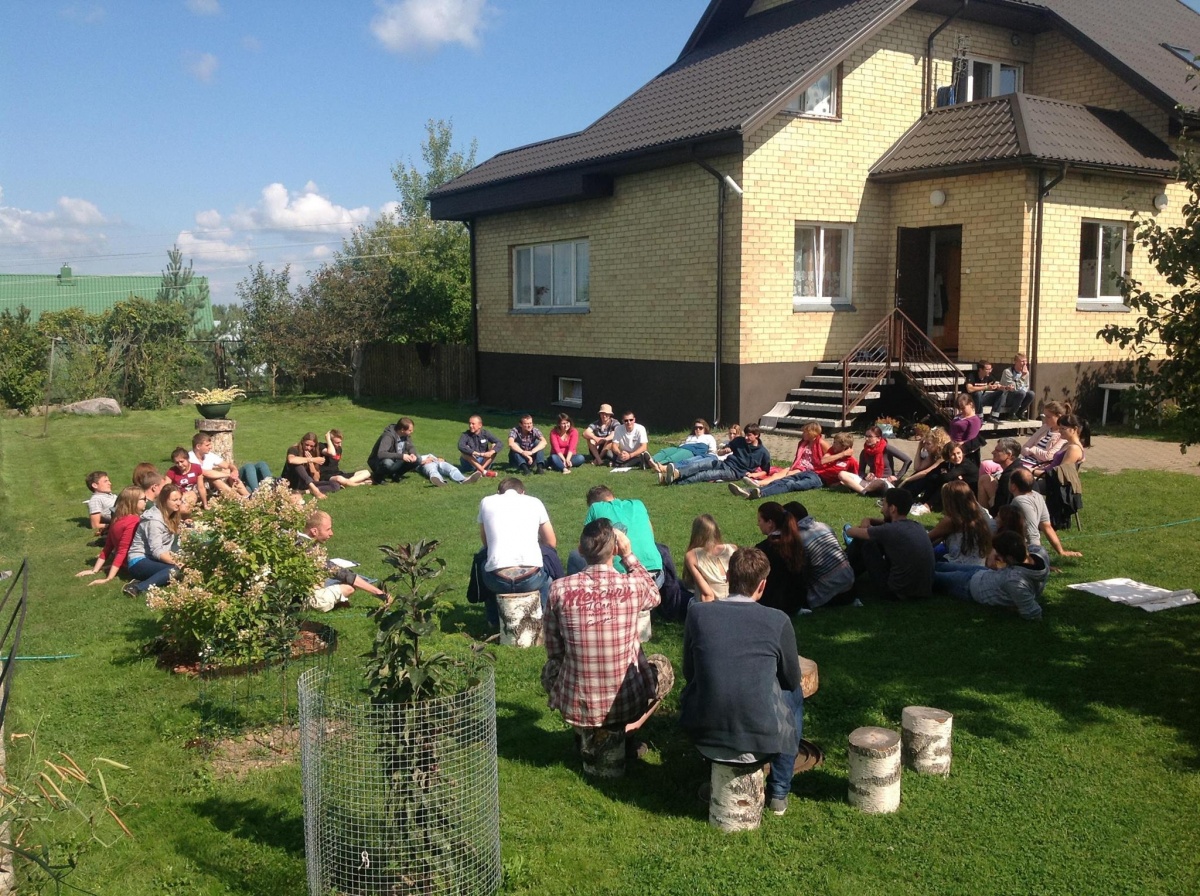 Today, these clubs have become the core of the Professional Government initiative involved in the replacement of corrupt officials with young Ukrainian experts. It is possible that the United Students of Belarus will once play a role in building a new government in the country.

Origins of the Initiative

The first Rally of the United Students of Belarus took place in 2007 and tried to support the emergence of an informal network of the country`s future leaders. The rally played a large role insofar as it helped maintain connections between Belarusians stranded abroad after the wave of repression in 2006. After the presidential elections, the authorities expelled hundreds of students from universities.

The project has become the most extensive network of young Belarusians who live both in Belarus and abroad. Belarusian students from over 15 countries participate in the project and every year about 50-60 people come to the rally to share their ideas and network.

USB participant Zhenia Tsikhanovich admits that ‘in the course of just one Rally people build a new network of Belarusians throughout whole Europe and the US’.

Since 2007, about 300 Belarusians have attended the rally, and some people try to attend the event every year. The author of this text met the editor of Belarus Digest during the 2012 USB gathering.

The Rally brings together two worlds of Belarusians – those who remain in country and those who have emigrated. It is noteworthy that the students abroad and those residing in Belarus lack a single major organisation or association that can bring them together. The United Students of Belarus fills this gap.

The event program combines work and fun in the form of the intellectual debate or concerts by popular Belarusian groups. Each rally has its own theme. Organisers and the USB Community devoted the 2014 Rally to the development and promotion of multicultural dialogue and the maturation of Belarusian identity. 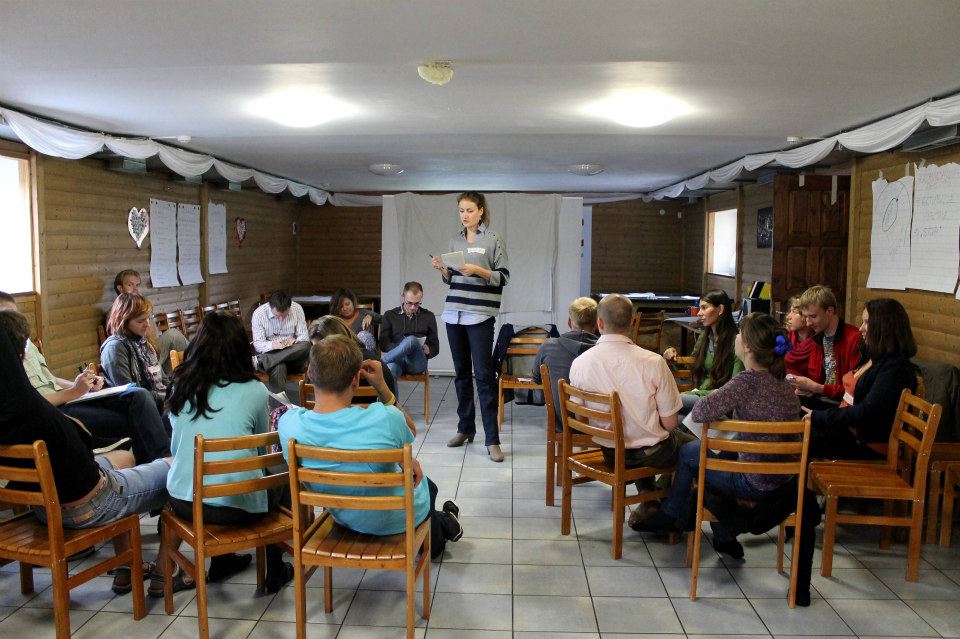 The USB has a good reputation not only among young Belarusians. Representatives of the Lithuanian authorities, Western diplomats located in Vilnius and NGO staff attend rallies to share their views on the future of Belarus with young leaders of the country.

Aivaras Žukauskas, coordinator of Rally 2014 said that besides opening ceremony with high-profile officials, one seminar about constructing of an image will be conducted by well-versed diplomat.

Belarus has long been affected not only by the lack of formalised structures of students and graduates, but also bringing together new generations of Belarusian emigres.

Last year USB participants launched a new organisation – the Global Belarusian Leaders. The organisation is going to recruit new members from among young and perspective Belarusian professionals from all over the world.

However, this organisation, as is often true of most emigre organisations, has failed to remain active over a long period of time. The GBL is just one example of the new ideas popping up within Belarusian civil society, but still faces the typical problems associated with the Belarusian community.

For one, new emigre organisations tend to become too politicised, as they usually unite around a particular political group. Such structures fail to attract a large number of people. Traditional emigre communities appear to be too old-fashioned, so they cannot offer new emigres incentives to build networks.

Therefore the United Students of Belarus has set before itself the serious task of inventing new fresh ideas that will connect Belarusians from the world over.