Belarusian Constitution: An Obituary on Democracy

On 15 March 2013 Alexander Lukashenka congratulated Belarusians on the Constitution Day.

Since this document entered into force in 1994 it has suffered two substantial revisions, each of which emphasised the further decline into an authoritarian abyss.

On 15 March 2013 Alexander Lukashenka congratulated Belarusians on the Constitution Day.

Since this document entered into force in 1994 it has suffered two substantial revisions, each of which emphasised the further decline into an authoritarian abyss.

Nowadays the Belarusian Constitution fails to fulfil its main purpose: to safeguard the country from the usurpation of power. Instead it has become an instrument of such abuse, entitling the all-powerful ruler to control the state machinery completely.

The Story of a Grand Takeover

Adopted in 1994, the Belarusian Constitution contained all the prerequisites to make this post-socialist state a European democracy based on the rule of law and the separation of powers. But it failed to resist the intentions of the first democratically-elected president to grasp power.

Since Lukashenka won the presidential elections in 1994 he has remained in permanent conflict with other branches of power: the legislative (Supreme Council) and the judicial (Constitutional Court) until 1996.

In November 1996, Lukashenka initiated a referendum proposing a new version of the Constitution which would enormously enlarge his powers and demean the role of parliament. The Supreme Council came up with a counter-proposal to abolish the institution of president and reform Belarus into a parliamentary republic.

The Constitutional Court unambiguously ruled that the results of the planned referendum could be only advisory, not mandatory. But Lukashenka issued a special edict making the referendum’s results legally binding.

A group of MPs opposed to the edict initiated an impeachment procedure against President Lukashenka. They asked the constitutional court to examine this issue. Ultimately, it culminated in a major political crisis in Belarus.

After a night of secret talks with Russian governmental envoys on 22 November 1996, ​Alexander Lukashenka and the Head of the Supreme Council of Belarus, Syamyon Sharetski, signed an agreement: parliament was to withhold the impeachment and Lukashenka was to withdraw the mandatory implementation of the referendum by edict.

The next day, after the Russian envoy had left, the pro-presidential fraction in the Belarusian parliament rejected the agreement. This gave Lukashenka a free hand to hold his referendum as legally binding just as he wished it to be.

On 24 November the referendum finally took place. Lukashenka, according to official figures, won on all the items that he had proposed.

The head of the Central Electoral Committee, a famous Belarusian lawyer and politician, Viktar Hanchar, refused to recognise the results because of multiple falsifications. Lukashenka dismissed him immediately without consulting the parliament as required under law. A few years later Viktar Hanchar was mysteriously kidnapped.

On 26 November 1996 the Constitutional Court, by a majority opinion, terminated the proceedings on impeachment. This event signified the end of the short-lived Belarusian democracy.

In the Aftermath of the Referendum

Soon after the referendum Lukashenka himself formed a new parliament that, having dismissed the others, counted among its ranks 110 loyal MPs. The new body was called the House of Representatives and became the lower chamber of the bicameral National Assembly.

In 2004 another referendum took place. Lukashenka removed the limitation of two presidential terms for any individual, allowing himself to stay in power for as long as he wanted. This time the loyal parliament and judicial system kept silent about falsifications and a direct breach of article 112 of the Electoral Code that prohibited putting issues dealing with presidential elections to a referendum.

The Venice Commission, a reputable Council of Europe institution, tasked with observation of constitutional developments in the world, called the results of the 1996 and 2004 referendums both unconstitutional and anti-democratic.

The EU, OSCE, and USA followed the same line. After the events of November 1996 they withdrew recognition of Alexander Lukashenka and his puppet parliament as the legitimate authority in Belarus. The Parliamentary Assembly of the Council of Europe expelled Belarus. It now holds a "special guest" status.

In the present-day Belarusian Constitution the president dominates all three branches (legislative, judicial and executive) and has exclusive powers in each of their fields of apparent competence.

For example, the president can appoint and dismiss all the judges in the country except for six judges of the Constitutional Court (they are elected by the Council of the Republic, the upper chamber of Belarusian parliament). For the appointment of top judges to the higher courts, the president needs formal approval from the Council of the Republic, which he has always received in the last 17 years.

Although the president is not de jure the head of the executive branch, he appoints all the ministers and other members of the government. The House of Representatives must approve the person of prime-minister. If it fails to reach such an agreement twice, the president can dissolve the parliament. Once again the recent history shows that parliament has never disputed any presidential decisions.

In the legislature, the powers of the president seem to be overwhelming. Presidential decrees and edicts have the same legal force as laws. But article 137 of the revised Constitution specifies that presidential acts are to prevail in any case of conflict with other laws.

Symbolically, Article 84, which describes the powers of the president, is the longest one in the entire Constitution.

Article 57 of the Constitution provides citizens with the right to choose alternative civil service instead of mandatory military service. But the mere absence of the corresponding law disables this provision. Young men referring to this norm risk going to jail for claiming to exercise their constitutional right.

Even the Constitutional Court, cleansed of independent judges, has several times referred to such gaps and other defects of the Constitution, such as the absence of an ombudsman-institute or the presence of the death penalty. Nobody, however, has responded to these unpretentious efforts put forth by the Court.

The narrative of Belarusian modern history will always be a perfect example of how a country must not treat its most important law. When rewritten for the political purposes of specific personalities, the constitution becomes a political tool instead of the foundation of a democracy.

Why Belarus Needs To Reform Its Bureaucracy

Belarus is awaiting reforms to the public administration system, ordered by Alexander Lukashenka last year. It looks like the president’s main motive is to save money. Considerations of efficiency come second. However, the existing system of public administration cannot boast of particularly outstanding achievements.

Several indicators point to the necessity of a serious overhaul. Reasons for public administration reform are as evident as, perhaps, never before.

In 2012 the Belarusian president declared that he wanted to reform the system of public administration in the country. He said that the state apparatus needed optimisation and appointed a special state commission to prepare reforms.

But Lukashenka only supported the idea to fire about 25 per cent of government officials – in order to save state funds and raise salaries for the remaining 75 per cent. He practically dismissed the commission’s recommendation to dissolve the two ministries saying that he was “not ready to make such decisions yet”.

Now the legal act that will define the contours of the proclaimed public administration reform is going through its final discussions in the Council of Ministers. According to a source in the government, the prime minister’s office is not going to push for something different to what Lukashenka announced in January. Even though primarily it spoke in favour of reforming the structure and functions of the executive branch.

Thus, it looks like the whole “reform” will be limited to mere personnel firing. And this obviously cannot solve the problems of the public administration system in Belarus, which, in Lukashenka’s own words, fails to deliver.

Respected international studies prove this failure. Worldwide Governance Indicators by the World Bank has the reputation of being the most thorough comparative study of public administration systems in the world. The chart below shows the 2011 results in in the category “Government effectiveness”. 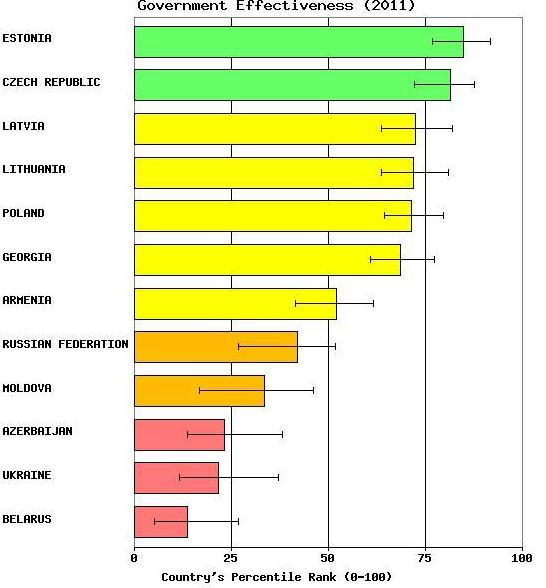 Presumably, the problem of government officials leaving their posts in Belarus in search of better professional opportunities elsewhere became one of the triggers for Lukashenka. He publicly admitted it several times.

The situation looks logical. The level of pay that Belarusian bureaucrats enjoy leaves much to be desired. If we compare responsibilities and salaries in the public and commercial sectors, the latter is far more comfortable. And the commercial sector in Russia offers even better opportunities.

Hence, more and more government officials in Belarus prefer to change their jobs.

The problem seems self-evident. And it goes beyond miserable salaries in the government sector. Huge workload is another factor.

During an 8-hour long session of the Council of Ministers on 1 March President Lukashenka disclosed many secrets of the Belarusian government. He pointed to personal shortcomings of almost all ministers and made several catchy statements about the state of the public administration in the country. For example, he emphasised that a great deal of his own decrees never come into being because of the government’s poor performance.

For observers of Belarusian politics this was a familiar scene: the populist authoritarian leader publicly reprimanding his appointees to demonstrate to the general public that he remains in full control of the situation. But in fact, Lukashenka really spoke the truth.

Analysis of the government’s achievements proves a poor record. Take for example the 2006-2010 Program of Socioeconomic Development (Belarus sticks to the Soviet tradition of 5-year long macro-plans).

Technically the government accomplished most of the quantitative goals, like general investments and personal income growth. But the achievement came at a very high price. The authorities’ policies led to huge macroeconomic imbalances, which in their turn led to the 2011 financial crisis. The latter resulted in the 300 per cent devaluation of the national currency and enormous monetary losses for the population: according to some estimates, the Belarusians lost more than USD 1 billion.

In any democracy in the world this is reason enough for the government to step down. In Belarus, however, the government lingers on, as President Lukashenka does not have much choice from among his nomenclature to form a new one. However, such poor performance definitely signals the need to reform the governance system that fails to deliver on its basic functions.

A popular saying in Belarus goes that you cannot even sigh without official permission.

According to the legislation, the state apparatus has 1500 functions. But as the Ministry of Economy found out, if we take a closer look at all these functions it turns out that the real number exceeds 3800. The laws are often so vague that one big function of the state bodies actually foresees three or four smaller functions. Not surprising, therefore, that the government seems to be everywhere in the country.

And also unsurprisingly, the functions of different government institutions quite often overlap. The state’s controlling activities serve as a classic example.

The central body that deals with controls is the Committee of State Control. But besides them, 37 (!) other government institutions have the right and responsibility to exercise controlling functions. For local businesses this turns life into a real nightmare. Each year entrepreneurs’ unions call for a fully-fledged government reform to stop the controlling mayhem.

If we compare corruption in Belarus and, say, Ukraine, the former will look almost flawless. And this is an argument that the authorities in Minsk often proudly make.

However, numerous international corruption indices do not leave much room for pride. For example, in 2012 the Corruption Perceptions Index of Transparency International ranked Belarus 123rd. In 2011 the result was even worse – 143rd place. This is another reason for the Belarusian authorities to seriously consider public administration reform.

To sum up, the Belarusian system of public administration definitely finds itself in crisis. By merely firing a quarter of civil servants, the government solves no major problem. Comprehensive reform is knocking on the door.