Belarusian Machine Building: Once a Nation’s Pride, Now a Burden?

Wages of factory workers have been cut almost in half in 2014. And Belarusian diplomats have had their own share of embarrassment when Belarusian machines break down during presentations and ceremonies.

Belarus has no choice but to abandon its focus on the shrinking Russian market. The idea of privatising these enterprises by Western company may yet emerge among Belarusian decision makers. Keeping these enterprises in the state's hands costs too much and their privatisation by China or Iran, as previous projects show, may bring frugal results.

Machine building, which was developed in Belarus after the Second World War, has long been considered the gem of Belarusian industry. The Minsk Automobile Plant has become one of the largest manufacturers in Eastern Europe manufacturers of heavy vehicles, buses and trolley buses. 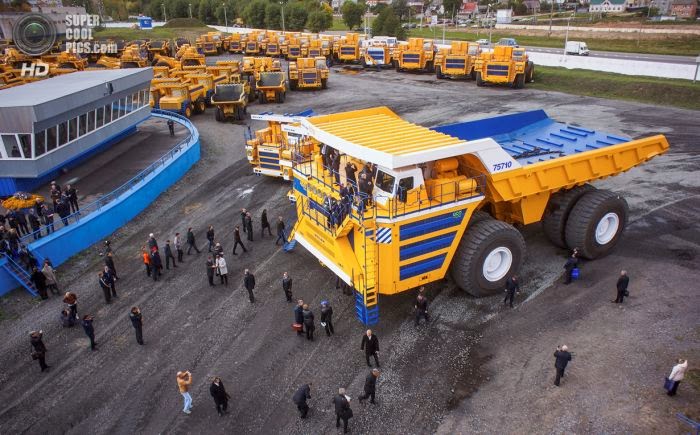 Since its establishment the Minsk Tractor Plant has produced more than three million tractors. For many countries the "Belarus" tractor remains a well-recognised national brand. The Belarusian Automobile Plant makes some of the biggest dump trucks in the world.

Recently published statistics from the Ministry of Finance showed that now Belarusian mechanical engineering is having a serious problem. After the third quarter of 2014, the three giants – the Belarusian Automobile Plant, Minsk Tractor Plant, and Minsk Automobile Plant – have all become leaders in terms of sheer losses among all enterprises in Belarus.

The companies have filled warehouses and lowered there production. The production of dump trucks dropped by more than a third over 11 months in 2014 when compared with the same period in 2013. Reserves exceeded the average monthly production by more than four times. A Minsk Automobile Plant employee, who works in the busiest manufacturing bus lines, said to the TUT.by web-site that previously they made monthly 120 buses, now only 60-80.

But now these losses are damaging the Belarusian economy, as their partner enterprises have no orders coming in. Employees at these plants now typically work four days a week and there was an extended New Year holiday at the Minsk Automobile Plant that lasted from 1 to 12 January.

Contrary to the former populist policy of the government, at this point wages cannot grow faster than the efficiency of the enterprises. As trade union activist Henadz Fiadynich says, if in spring 2014 the painters at the Minsk Automobile Plant earned about $700 in the spring, now they are earning $420. It is not much of a surprise that companies no longer pay workers any bonuses.

Why Belarusian Machinery Appears to be in Decline

In December the Minsk Tractor Plant and Minsk Automobile Plant got new directors, but these new individuals can hardly solve the structural problems of the enterprises. The Belarusian industry simply lacks sufficient funds for the development of new technologies.

Thus, the quality of the products are declining. The Belarusian Ambassador to France Pavel Latushka stated in 2014 that, "we have situations when our machines breaks down during presentations and what could be the credibility of such a product?”

Belarusian enterprises have failed to develop a successful marketing strategy. On top of the fact that there is no money to build maintenance garages throughout the world, the enterprises even lack enough sales offices outside the country to sell what they do have.

Valiancin Lopan, a PR manager who previously worked for the Minsk Automobile Plant, commented to Belarus Digest that the focus on the Russian market is to date a serious mistake on the part of Belarusian machine builders. According to a representative of the Minsk Tractor Plant in Russia, in the first half of 2014 product sales decreased by 11%. The other manufacturing giants may have losses even greater than this.

However, the demand in the Russian market has declined not only because of the crisis, but also due to competition. Many companies like Volvo, John Deere Rus, CAT, Komatsu, Terex have assembly plants in Russia.

Earlier, machines from the Minsk Automobile Plant was popular in developing countries because of their simplicity – the workers could fix the engines themselves. Now, engines are more advanced and full of electronic devices, and as a result Belarusian goods have lost their advantage. 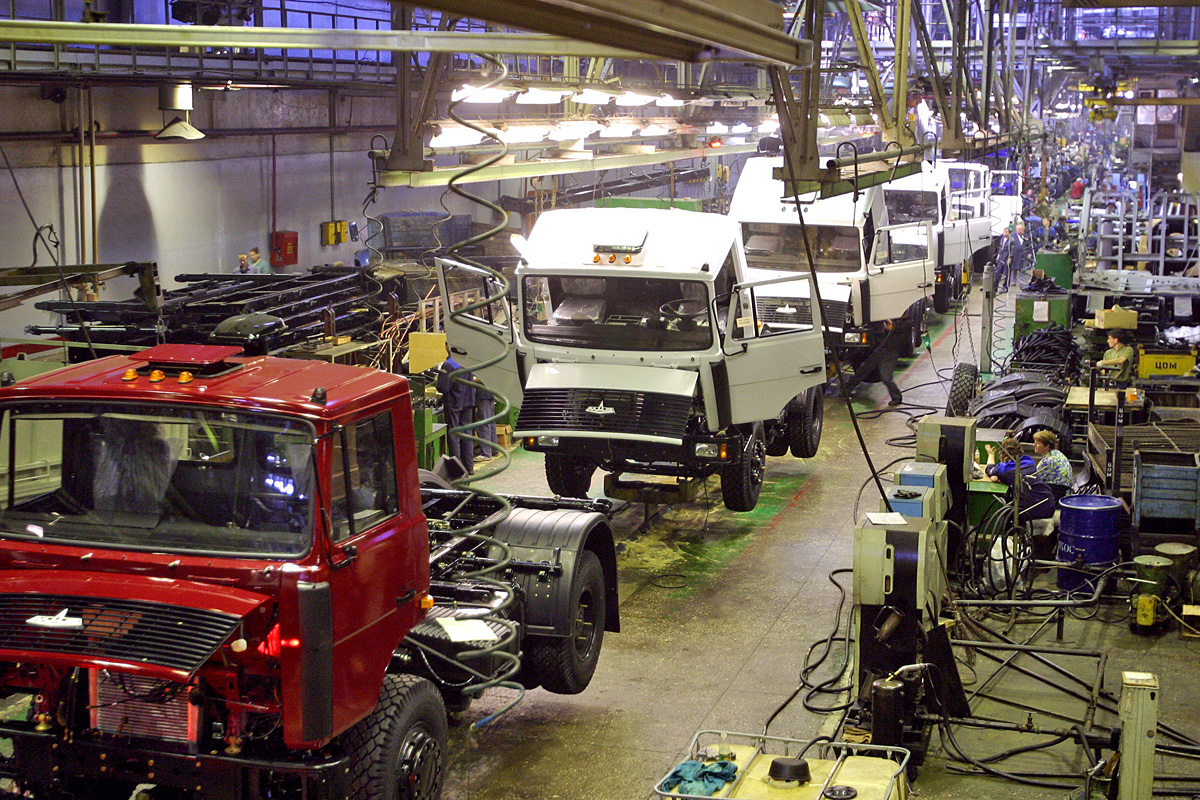 Additionally, Belarusian enterprises have traditional problems associated with an authoritarian economic control model. Plants often supply their equipment to state-owned enterprises for free, public managers are afraid to be proactive and cannot pay enough money for innovation. Valiancin Lopan says that some engineers can innovate, but they want a lot of money for it.

Financial analyst Siarhei Chaly told Belarus Digest that Belarusian machine-building enterprises badly need strategic investors. And it seems that Lukashenka's regime does not trust either the Chinese or Iranians, whose enterprises in Belarus so far have yielded little in economic success.

For instance, over a five year period the Iranian company Samand produced about a thousand cars which were mainly sold to state organisations. Ford, which manufactured cars in Belarus in the '90s, did the same amount of sales in a year. The authorities closed both, as the enterprises did not meet the expectations of the regime in terms of their sales figures.

At present, searching for a Western investor does not look today as unrealistic as it used to as the survival of Belarusian machine building depends on whether or not it can find one. Peter Spuhler, owner of Swiss train car-maker Stadler Rail, is doing business in Belarus successfully and has had no issues with the authorities.

Belarusian companies should develop new markets outside of the former Soviet Union. This is hardly possible in the case of Western countries, but the focus should be on the developing world. Valiancin Lopan told Belarus Digest that machine builders should open offices in those countries with strong export potential and these offices should be run by the employee of the enterprises as usual dealers are bad at dealing with sales.

In the end, the Belarusian machinery industry can learn much from their successful colleagues. The Minsk Wheel Tractor Plant, maybe one of the most roboticised of enterprises in Belarus, entered the list of top 10 profitable enterprises recently. In December, its head Vitaly Vouk was promoted to the post of Minister of Industry of Belarus.

Belarusian machine building has a long history and great potential. The only question if there is enough will among the authorities to reform it. 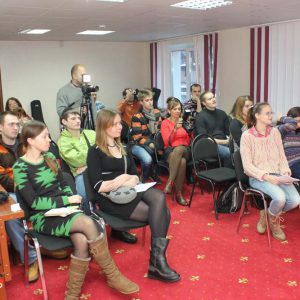 CSOs contribute to government discussion of 2030 Concept of National Development. Government of Belarus says its finally ready to adopt a separate law on domestic violence and to sign the UN Convention on the Rights of Persons with Disabilities.

Network of A-100 gas stations switches to the Belarusian language. From January 1, all operators of the private company of gas stations are advised to talk with customers in Belarusian; within a month all messages and labels will be replaced accordingly. The company emphasizes that the transition to the Belarusian has happened in close cooperation with the courses MovaNanova/ Language in a New Way.

Office for Democratic Belarus (Brussels) presents the results of 2014 – significant events in photos, media, and articles. The Office has collected materials to present the most interesting results of its work in 2014 – in particular, the 2nd European Intercultural Festival, Clearing House initiative, sectoral discussions and meetings with representatives of NGOs and local authorities, expert meetings in the field of higher education and energy, public lectures and other events.

'Contemporary History in Faces' in Vilnius. The Barys Zvozskau Belarusian Human Rights House invites to the presentation of the book of the Belarusian journalist Aliaksandr Tamkovich ‘Contemporary History in Faces’. The book tells the stories of 70 the most outstanding people known in Belarus and beyond who over the past 15-20 years have been directly involved into the recent Belarusian history. The presentation will be held on January 14, at 3 pm, in the Belarusian Human Rights House in Vilnius.

Belarus Research Council is announcing a call for concept papers for policy-oriented original research that focuses primarily on actionable policy recommendations. The call is open for Belarusian think tanks and NGOs that intend to conduct their policy-oriented original research in Belarus focusing on solutions – policy, legislative or other related. The deadline for submission is February 1, 2015.

Local governments: 15 years online. For two years Legal Transformation Center Lawtrend monitors the information on the official websites of Belarus’ state bodies. The recent monitoring covers 135 official website in regions and Minsk. One of the basic conclusions is that the functionality and content of websites of local governments do not correspond to any legal requirements or expert expectations.

'Belarusian Renaissance in Homel' edition. Homel branch of Belarusian Language Society released a brochure that tells about the history of the civil society development in Gomel region in the late 1980s – mid 2000s. The brochure contains several dozen interviews and unique photos.

Gender course for young Belarusian activists. Forum SYD and IRI invite to participate in a training course for young female Belarusian activists who are interested in gender issues and have the experience of participating in non-governmental organization or political party. The course duration is 5 months. Deadline for applications is January 20, 2015.

Ihar Lohvinau fined of $70 thousand. On January 9, the owner of the private Minsk bookshop Ihar Lohvinau stood trial where he was accused of selling books without the license of the Ministry of Information. The court supported the tax inspectors’ position and fined Lohvinau for over Br961 million (about $70 thousand). Lohvinau notes that the court decision means bankruptcy for the store.

TSEKH didn't manage to prolong lease. A Creative space TSEKH did not managed to prolong the lease of premises at Independence Avenue, which is owned to a commercial bank. The TSEKH worked for 1.5 year and became a shelter for dozens projects and exhibitions. The TSEKH director, Yulia Darashkevich doesn’t link the incident with political pressure as soon as the TSEKH has never collaborated with political organizations. The bank-owner refused to explain the reason for the eviction.

Massive blocking of websites in December. Since December 19, several informational Internet resources in Belarus were subject to blocking. In particular, users’ access to belapan.com and belapan.by, naviny.by, belaruspartisan.org,charter97.org, udf.by, 21.by, gazetaby.com, zautra.by have been restricted without explanations. Belarusian Association of Journalists considered that the blocking of socio-political websites was a complete breakdown of law and order.

Belarus develops a separate law to combat domestic violence. Vice Prime Minister orders police and Labor & Social Protection Ministry to prepare a concept of the Domestic Violence law by May 2015. Belarus is one of the last European countries where there is still no specific law against domestic violence. In 2013 an expert group within the network of CSOs to prevent domestic violence drafted a relevant bill that wasn't interested for the state bodies then.

Belarus will sign the UN Convention on the Rights of Persons with Disabilities soon, according to Alyaksandr Rumak, deputy minister of labor and social security. Belarus is one of the few European countries that have not joined the international treaty so far, adopted by the UN General Assembly in December 2006. Belarusian CSOs strongly advocate for joining the Convention, namely, the Office for the Rights of People with Disabilities is implementing the Sign with Heart campaign to collect signatures of organizations and concerned persons under the relevant public Memorandum.

CSOs contributed to the 2030 National concept. During three weeks of public consultations (November-December 2014) the Belarus Ministry of Economy received 22 letters on the draft National Strategy for Sustainable Socio-Economic Development for the period up to 2030. In particular, the Ministry publicly expresses its gratitude to a number of CSOs – SYMPA, Liberal Club, Legal Transformation Centre, Green Alliance, Minsk Bicycle Society, etc.