The Belarusian authorities did not take kindly to a Belarusian schoolboy calling on President Lukashenka to take the Ice Bucket Challenge. A mysterious new type of shrimp from Belarus is turning up in Russian supermarkets and a Belarusian citizen... 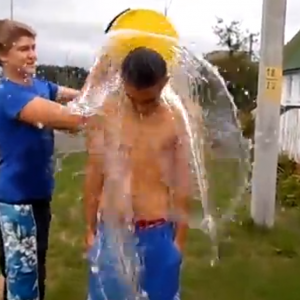 The Belarusian authorities did not take kindly to a Belarusian schoolboy calling on President Lukashenka to take the Ice Bucket Challenge. A mysterious new type of shrimp from Belarus is turning up in Russian supermarkets and a Belarusian citizen is suing Russian media for using the term Belorussia.

The government is seeking to improve the economy through repaying all of its outstanding debts in 2015 and ensuring its forex reserves are in good standing. Minsk is also looking to reestablish trade ties with Iraq after an 11 year drought.

Belarusian women veterans of World War II have been included in a new photo project, celebrating the accomplishments of regular people who have done extraordinary things. Meanwhile, Belsat TV has drawn the ire of Minsk once again as Belarus' Supreme Court rules against it – over its name. All of this and more in this edition of the Western Press Digest.

Belarus, not Belorussia! – The Guardian reports that a Belarusian man is suing Russian several news outlets for use of the name Belorussia, a soviet era term, claiming that it was an affront against him personally. The lawsuit has been dismissed by one of the Russian news agencies who is being sued as a provocative act from a member of a small group of activists.

Regnum also stated that it uses the term 'Belorussia' because it is the correct Russian word for Belarus, but permits the Belarusian spelling in its publications as well. Regnum, however, also defended its use of the term Belorussia on the grounds of increasing pressure against Russian speakers in Minsk. According to the coverage, the Belarusian language has become a hot topic once more. Traditionally an issue taken up by the opposition, Belarusian President Alexander Lukashenko recently spoke in Belarusian in a public speech for the first time in around 20 years.

Ice Bucket Challenge Leads to Possible Fine – The BBC reports on a story originally covered in Belarus' Radio Free Europe/Radio Liberty service of a young Belarusian, Dmitry Dayneko, who was called in by the police after issuing an ice bucket challenge to the nation's president. Lukashenka has not himself made a direct comment about the incident. Dayneko, who appears to be in secondary school, states that his motivation was simple: to see if he and his friends might get lucky. Police demanded that the video be removed, but as of the time of writing, the video is still online.

Lives of Belarusian Women on the WWII Front – The Huffington Post has brought together a series of pictures portraying the lives of Belarusian women who served on the front against Nazi Germany during the second World War. The pictures were taken as part of a project entitled 'The Other Hundred'. The project seeks to portray the extraordinary lives of ordinary people. The pictures show women who served in the Soviet Army, some being as young as 16 when they joined, worked in various positions throughout the war effort. Interviews with the veterans recount their experiences.

Belarusian Shrimp – Euractiv shares reports from Russia and Ukraine describing the appearance of shrimp in stores in Russia with a Belarusian point of origin. Earlier, landlocked Belarus promised Russia after it introduced sanctions against EU foodstuffs to not reexport them to Russia under their own label. Seeking a way around the ban on their goods, several EU countries are looking to follow Belarus' lead and find a way to regain access to Russian markets by selling them through partners, such as Turkey, that are not on the ban list.

Belarusian Foreign Minister Visits Iraq – In its first time in over a decade, a high-ranking Belarusian visited Iraq and met with Iraqi officials. Accompanied by senior members of the Ministry of Industry and an state-run oil firm, the Foreign Minister of Belarus, Uladzimir Makei, and their Iraqi counterparts discussed closer cooperation and the potential sale of oil production equipment to Iraq. The report from RFE/RL also mentions Minsk's denial of selling and delivering weapons to Saddam Hussein's regime and that since the downfall of his regime, no Belarusian officials have visited Iraq in an official capacity.

Belarus Looking to Pay Off All Debts in 2015 – The Global Post shares that Belarusian Prime Minister Michail Miasnikovič recently announced that Belarus will honour all of its commitments and debts in the coming year, calling it a "sacred duty". While the loans that the government borrowed to help modernise the Belarusian economy were at the top of the list of the government's priorities, the PM also noted that Minsk will be closely following its forex reserves. The funds to pay the nation's foreign debts will reportedly come from customs duties on crude oil exports and export duties on oil products. Officials estimate that their profits from these two lucrative sources of income will go above the $2 billion mark.

Media and the Arts

Belsat TV Under Fire from Minsk – RFE/RL reports that the only independent Belarusian language TV stations, Belsat TV, recently became the target of the authorities in Minsk. The Supreme Court of Belarus ruled that the TV station, which is officially registered and operates in Poland, violated the rights of a local television equipment company called BELSATplus, apparently referring to an infringement on the usage of the latter's brand name. Belsat responded to the Belarusian court's ruling by issuing a statement saying that it would not have any bearing on the news agency since it is a Polish legal entity and subject to Polish law.

Belaurisan Free Theatre Tackles LGBTQIA Issues – In an interview with Three Weeks, Vladimir Shcherban discusses where the idea for doing a new play entitled, 'merry christmas Ms Meadows' came from. According to the troupe member, although while not newcomers to issues facing the LGBTQIA community, the issue struck a chord with them. As a result, the recent ramping up of persecution against members of the community in Belarus inspired them to bring it to the stage.

The source material for the show came from sources as diverse as texts from Plato and articles from the Daily Mail to sex workers in Ghana. Discussing the troupes's creative process and focus on working with actors in Minsk, Shcherban shares with Three Weeks that he, and other members of the troupe, constantly practise via Skype. The play has been performed in Edinburgh and the Theatre troupe hopes to take it to other cities in the near future, if at all possible.

Oil in the Eurasian Economic Union, Poroshenko, the Language – Digest of Belarusian Analytics 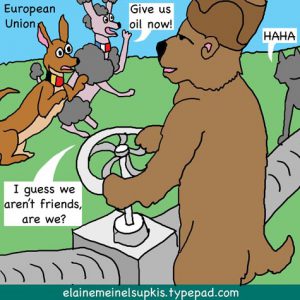 The experts believe that the main benefit for Belarus is related to the oil trade with Russia, which is of high importance to the country. In 2015, Belarus will be able to keep half of the export duties on oil products in the country (USD 1.5 bn, or 2% of GDP). In the past, Russia received the entire amount.

Belarus’ Peace Effort and a Likely Response of the West – Grigori Ioffe breaks down positive and negative implications of the August 26th Minsk summit devoted to the crisis in Ukraine. The summit signifies Minsk's slow but steady progress in its relations with Europe, according to the author. He argues that current geopolitical situation will allow Belarus to achieve a true breakthrough.

Lukashenko and Poroshenko: Friends of Convenience? The BELL No. 3(45) – Authors of the latest issue of The BELL analyse the implications of the new developments in Belarus-Ukraine relationship. In the first article, Yauhen Krasulin argues that these relations are based on self-interest and were to be expected, countering the popular notion that the rapport between Lukashenko and Maidan-promoted leaders signals a change of course by Minsk. In the second article, Aliaksandr Aleshka reviews the benefits of Belarus-Ukraine strategic cooperation.

Belarusians try out a new language: their own​. – Christian Science Monitor analyses signs of revival of the Belarusian language. After the years of being overshadowed by Russia and the Russian language, Belarusians are keen on learning their native language to assert their country's identity and culture apart from neighbouring Russia. For many young people speaking Belarusian became cool. Lukashenko himself raised eyebrows when he gave a rare speech in Belarusian in July, close to the date of Belarus’ Independence Day, which some analysts felt was a political signal.

If you want to be a millionaire, go to Belarus. Opendemocracy.org offers a grim overview of life in Belarus. According to the article, if you want to return to the Soviet Union – just go to Belarus. Service is terrible, living standards low, internet access restricted, civil society non-existent – but there is an incomparable feeling of safety and serene calm; and lots of excellent vodka and good tasty food to go with it. What more could anyone want?

Twenty Years in the Making. Understanding the Difficulty for Change in Belarus. The article of Tatsiana Kulakevich in East European Politics & Societies analyzes the dynamic of pro-democracy protests in Belarus through the prism of social movements literature and such concepts as framing, political opportunity, and mobilising structures. It argues that weakness of the mobilising structures and framing processes at times when political opportunities presented themselves in Belarus resulted in an absence of large-scale protests and a failure to sustain the development of social movements in the country. At the same time, Belarus cannot be considered as being in a static or retrogressive state since transnational flows characteristic of a globalising world have exposed people to wider flows of information, providing them with counterframes and resulting in a modest growth in the numbers of protesters and a change in the preferences of the Belarusian population.

The modern university as an imagined community: European dreams and Belarusian realities. The article of Mark Johnson and Pavel Tereshkovich explores various aspects of modern Belarusian national identity through an analysis of two connected case studies, the development of the flagship national university, Belarusian State University (BSU) in Minsk and of the European Humanities University (EHU), a private institution founded in Minsk in 1992 with international funding. EHU was then forced into exile by the Belarusian regime in 2004, and has operated since that time in nearby Vilnius, Lithuania. It highlights various dimensions of Belarusian national identity, from a neo-Soviet and authoritarian populism, to a more primordial or organic conception of nationalism, to a more European and cosmopolitan ethos of liberal education.

Freedom of associations and status of non-commercial organisations in Belarus for the second quarter of 2014 is released by the NGO Assembly and Lawtrend. Authors argue that legislative changes pertaining to registration of NGOs could have become the main factor of positive trends. They conclude, however, that the actual conditions for new organisations' registration did not change substantially. Monitoring includes the list of new registered organisations, among which sports non-profits are still the majority.

80% of Belarusians Do not Know How the State Budget is Made and Spent – BIPART project concluded based on the results of the latest IISEPS poll conducted in June 2014. Regionally, the highest awareness is represented by the residents of Mogilev (27%) and Gomel (31.2%). Only 10.2% of Minsk residents said they knew how the Belarusian budget is used. According to the poll, this information is either unavailable, unclear, or just uninteresting for Belarusian citizens.