As a result of the Belarus-Sweden diplomatic conflict, many media stated once again that  Belarus is now “even more isolated” than it was before. Last Tuesday, the Belarusian ambassador to Berlin, Andrei Giro, was ordered to come to the German Foreign Ministry as... 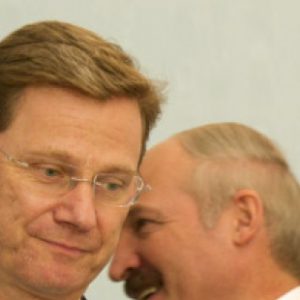 As a result of the Belarus-Sweden diplomatic conflict, many media stated once again that  Belarus is now “even more isolated” than it was before. Last Tuesday, the Belarusian ambassador to Berlin, Andrei Giro, was ordered to come to the German Foreign Ministry as a reaction to the diplomatic conflict between Belarus and Sweden.

German authorities often criticise Belarus for disrespect of human rights. In return, the Belarusian president personally attacked the German foreign minister in March 2012 by saying "It is better to be a dictator than a gay".

While on the high political level relations have been badly strained, particularly after the 2010 presidential elections, at grassroots level Belarus does not look so desperately isolated.

Belarusians See Germany as the Most Attractive Country

Despite cold relations on the higher level, Germany is one of the most active countries in Belarus on a lower level. German expatriates constitute are one of the biggest communities of Western foreigners in Belarus. Several hundred German citizens officially live in Minsk. Moreover, a whole variety of German institutions work in Belarus. 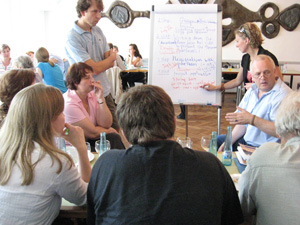 Apart from a hotel and a conference-centre, the IBB has various fields of activity. In one of the few preserved buildings of the former Jewish ghetto in Minsk is now the History Workshop. Since 2003 it serves as a place for historical research with scholars and witnesses.

Another focus of the IBB is the Belarusian media landscape. In its Media Academy, the IBB offers seminars for Belarusian journalists- aiming at bringing together state and non-state journalists. In a country where training for journalists is provided by state universities only, using teaching methods dating back to Soviet times, this is a good opportunity for many journalists. The IBB hopes to make reporting more professional and enhance the number of investigative and well-researched articles in the Belarusian media.

Hundreds of Initiatives under the Belarus Support Program

The most important task for the IBB is, however, to implement the German government's Belarus Support Programme for Belarus. Since 2002, the government has supported small projects co- organised  by German and Belarusian parties with a budget of over €13m. The aim of these projects — and overall the German support program — is to achieve the objectives of the "National strategy for sustainable socio- economic development of the Republic of Belarus" approved by the Ministry of Economy in 2003.

Through this programme, the IBB manages to bring together several hundred German and Belarusian initiatives. The impressive number of partnerships as well as the fact that most of them have been cooperating since the early 1990s shows that Belarus is by no means isolated at grass-roots level.

Moreover, the vast majority of initiatives financed by the Belarus Support Program are officially registered, as they do not aiming at political but social and economic change. For the IBB, which also hosts the renowned Minsk Forum Conference, it is crucial to prevent Belarus from becoming more insolated. The Minsk Forum has taken place since 1997 and assembles politicians, scientists and entrepreneurs in Minsk.

Apart from IBB, there are several other institutions working in Belarus.  Among the most important of the German- Belarusian partnerships are two organisations working in the economic and social fields: The German- Belarusian Economic Club (Deutsch-Belarussischer Wirtschaftsclub) and the Representative Office of the German Economy in Belarus (Repräsentanz der deutschen Wirtschaft in Belarus).

The aim of these two organisations is to improve conditions for enterprises and to help firms that want to establish economic relations with Belarus. The German- Belarusian trade turnover was USD4.438bn in 2011, which constitutes 5.1 per cent of the overall external trade of Belarus.

Germany is in 6th place for direct foreign investment in Belarus. Despite the fact that working in Belarus is often difficult because of the economic situation and administrative barriers, about 350 German enterprises work in Belarus. Almost one hundred of them have a representative office in Belarus.

One example is the German waste management company Remondis that has been working in Minsk since 2010 as a joint venture with the City of Minsk. Well-known German companies such as Bosch and Henkel are present in Belarus, while others (such as Zeiss) have joint ventures with Belarusian firms.

The last major area in which German institutions are active in Belarus is cultural cooperation. While the British Council and the US culture centre had to close their offices in Belarus, the Goethe Institute is very active. Not only does it offer German-language classes but also a big variety of projects for teachers, cultural managers and other people interested in German language and culture. Moreover, it has been organising cultural events since its opening in 1993. 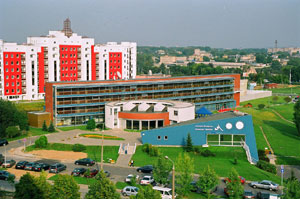 The German Academic Exchange Service (DAAD) also has an office in Belarus. Hardly any other institution would maintain a whole office in order to foster academic exchange with Belarus. The number of students going from Belarus to Germany with a DAAD scholarship is – not surprisingly- by far higher than the number of incoming German students.

Apart from the DAAD, there is also an office for German teachers working in Belarusian institutions, an office of the German Adult Education Association, fostering livelong learning in Belarus and cultural managers sent by German foundations that are working in different institutions all over the country.

This impressive list of activities shows that bilateral relations are much more than the statements and warnings issued by the Minister of Foreign Affairs. Even if official bilateral relations seem to be bad, many initiatives at grass-roots level continue working. They ensure the people-to-people contact.

A possible answer to the question of why German organisations in particular are so active in Belarus is that Germany as a big country has a large network of organisations working abroad, both state and non-state institutions. Because of the relative closeness of Belarus to Germany, Germany feels that the country is its business more than does, say, France.

In any event, it is good to see that Belarus is by no means as isolated as one might think when reading various newspaper articles these days.

Programmers in Belarus: the Cream of Society 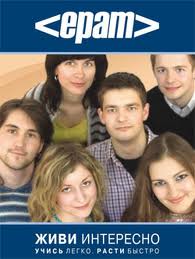 The 2012 university admissions campaign in Belarus has just finished and reflects a very interesting trend. However good Belarusian higher education is for engineers, physicists, and mathematicians, that does not seem to matter to young people anymore. They want to become programmers. That means representatives of almost the only profession that guarantees them independence and a decent living standard immediately after and even before graduation.

A decade ago the cliche IT specialist image in Belarus included uncut hair, a worn-out sweater and other attributes of a modest bachelor's life. Now they form a distinct Belarusian – primarily Minsk –  cohort with a label of successfulness and independence unparalleled in other sectors of the struggling Belarusian economy. To a large extent this happened due to the reasonable regulatory approach to the IT industry in Belarus.

According to the Belarusian National Statistics Committee. the average programmer’s salary approaches $1,300 per month. It is about three times higher than the average salary across the country, which currently is less than $450. Employment websites are full of vacancies for IT specialists. Competitions for the title of the Best IT Company to Work For become more popular to attract the brightest. Public respect is taken for granted. All these advantages target primarily a group of young people in their 20s who have recently graduated from Belarusian universities.

Saying that programmers are just lucky would be unjust. Their efforts and talent deserve real respect. This year once again, in the Belarusian State University passing scores to the programmers’ alma mater – Faculty of Applied Mathematics – were considerably higher than to any other natural science faculty: 321-345 (depending on speciality) out of 400 possible points. Passing scores for most other natural science specialities remained well below 300.

But even the admittedly talented students find curriculum of the Faculty of Applied Mathematics difficult. At the same time, they have to do plenty of extra-curriculum studies, because the university provides only basic knowledge of programming languages.

However, the graduates get paid for every drop of their efforts because the Belarusian IT industry is ready to remunerate their skills and continues to grow.

Tax benefits are probably the most impressive. For instance, the High Technologies Park’s residents are not subject to profits tax, VAT on turnover from sale of goods and rendering services in the territory of Belarus, or customs duties and VAT with respect to goods imported into Belarus. Preferential personal income tax rate (9 per cent instead of statutory 12 per cent) applies to profits of individuals earned working at the High Technologies Park. Withholding tax rate on income from dividends, interests, royalties if the source of payment of such income are significantly lower than the normal rate.

There is nothing unusual about big demand for Belarusian programmers. Respect for post-soviet schools of math and physics that laid the foundation for programmers’ qualification has always been high. But until recent years that resulted in a huge outflow of bright graduating students to foreign countries.

Despite their interest in Belarusian programmers, major international companies were unwilling to enter the market even for outsource out of prudence. The High Technologies Park’s tax incentives became the second and decisive reason for starting an IT business in Belarus. Success of the first foreign IT companies attracted others, and finally Belarusian programmers became able to find good jobs in their home country.

Belarusian programmers still earn much less than their USA colleagues – about $88,000 a year in the USA compared to approximately $15,000 in Belarus. However, this can allow for quite a well-off life thanks to Belarus's relatively low cost of living. For example, monthly rent for a good two-bedroom flat is about $370. Since the difference in real income is not that striking, programmers take into account their wish to be with families and friends and often choose to stay in Belarus rather than go overseas.

End of the Fairy Tale?

While programmers prosper in Belarus now, many predict the end to their era and explain such apprehensions by the forthcoming oversaturation of the Belarusian labour market with skilled specialists. However right was the concept of diminishing marginal utility as such, it is too early to apply it to IT in Belarus. The export share in the total production volume of the High Technologies Park is 80 per cent. That means that it is only the world’s labour market saturation which they should be afraid of, which is very unlikely.

In the meantime, what seems to be a real threat to the current peace and quiet is that in 2020 the privileges of the High Technologies Park will terminate. Will doing business in Belarus still be so attractive to IT companies? It is not only programmers who worry about this. The best of them will always have the chance to get a job abroad. But the IT sphere feeds a number of related professions and administrative staff, provide the country with foreign currency and accelerates consumption in the country. This is a challenge Belarus is going in eight years, and it is already time to think about it.

Darya Firsava
Darya Firsava is a Minsk-based lawyer working on her PhD and leading a number of educational projects in Belarus.
all articles »
BRAIN DRAIN Education HIGH TECHNOLOGIES PARK INCOME IT BUSINESS IT in Belarus offshore programming PROGRAMMERS TAXATION