Ales Bialiatski awarded the Prize of the Peter Kelly. The ceremony was held... 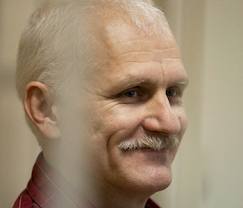 Ales Bialiatski awarded the Prize of the Peter Kelly. The ceremony was held on November 22, in Berlin. The award was given to a political prisoner Ales Bialiatski to recognize his merits in defending human rights in authoritarian Belarus. Ales Bialiatski refused to accept monetary component 10,000 euro, asking to transfer the funds to support human rights activity in Belarus.

Belsat reduces broadcasting. From November 26, the Warsaw-based independent TV channel Belsat is downsizing its broadcasting mode. Almost all of the regular programs are to leave in the forced vacation because they have no funding to the end of the year.

New centre of Belarusian emigration. On November 20, in Prague, six Belarusian organisations reached an agreement to cooperate as an "Alternative Belarusian Embassy" in the Czech Republic: Association "For Modernization", "Nash Dom", the NGO "Pahonia", etc. In response, the NGO of Czech Belarusians "Pahonia" made ​​a statement that the aforementioned meeting was "nothing more but a theatrical ostentatious staging, directed by political refugee Alexei Mikhalevich aimed to show him as a leader of the Belarusians in the Czech Republic".

Drupal-sliot. On December 15-16, in Minsk, the youth NGO "Falanster" conducts the 2nd Drupal-sliot. The event is organised as a social event which is to strengthen horizontal connections in the environment of drupal-developers (Drupal is an open source content management system) as well as other open source communities.

Budzma’s talk shows. On November 21, in Mogilev, the campaign "Budzma" ("Be Belarusians!") began a series of talk shows and public presentations under the title "Culture improves life!", which are planned to be conducted in all Belarusian regions. The Mogilev talk show "The CIS Cultural Capital: initiative from top or bottom?" was devoted to the issue of giving the city the status of the CIS cultural capital in 2013.

The 2nd Forum of Belarusian cyclists took place in Hrodna on November 24-25. The purpose of the Forum is to bring together the cyclists of Hroda and Belarus in order to influence the development of urban infrastructure. The Forum is organised by the “Velo-Grodno” initiative.

Weekend GDF events in Gomel. On November 24, Gomel Democratic Forum (GDF) hosts a round table devoted to youth politics in Belarus and organized by the movement "For Freedom". On November 25, GDF conducts a meeting of the youth club "Civilization" on the development of volunteerism in Homel region.

Educational websites' competition. 18 Belarusian websites take part in the "Best Website / Blog of non-formal education for 2010-2012". One of the nominees is a blog of the Golden Age University project aimed at working with the social, intellectual, and physical revitalization of Grodno elderly residents. Voting is available on the website of the 4th Festival of Non-Formal Education that will be held on December 7-9, 2012. 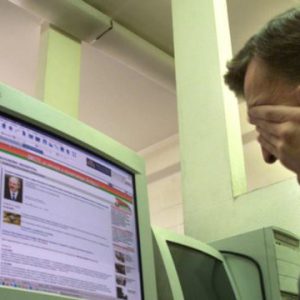 Politicians in social networks, civil society in politics, geopolitical preferences of Belarusians and the state of small business were, among other topics, in the focus of Belarusian analysts over the last few weeks.

Belarusian Politicians Have Nothing to Catch in Social Networks? – Naviny.by analyses what Belarusian politicians do in social networks and blogs: reveal personal secrets or promote their parties and movements. Most of the politicians use Facebook, broadcasting the same messages for Twitter and "VKontakte", as a form of communication with the people. However, so far there are not many politicians in the networks: during the parliamentary elections of 2012 only about 6% of the registered 364 candidates to the House of Representatives used the capabilities of the new media, mainly the opposition and independent candidates.

The Return of Europe – BISS presents the seventh issue of the polling memorandum series based on the public opinion poll data of the Independent Institute for Social, Economic and Political Studies (IISEPS). Surprising good news for Europe:  for the first time since June 2011 Belarusians would prefer a European choice. No winner appeared in the opposition’s controversy whether to boycott parliamentary elections or to participate. BISS considers those to be the two main outcomes of the latest polling data provided by IISEPS.

Belarus’ Foreign Policy Index №10 – Kremlin retains the full political support of Minsk. Ukrainian vector after summer activation returned to zero The relations with developing countries improved a bit, especially with China. The relations with the European Union re-entered the stage of "vacuum of events".  These are the main conclusions presented by BISS in the latest issue of Belarusian Foreign Policy Index, covering September and October of 2012.

Belarus Leader Relishes Reputation as Dictator – Alexander Lukashenka gave an interview to Reuters, an international news agency (November 26). The journalist shares his observation that Belarusian president is a pariah in the West, viewed suspiciously by Russia and loathed by opponents in exile or jail, but he is relishing his notoriety as Europe's last dictator.

The Main Battle will be After Lukashenka – Alexander Klaskovsky refers the Alexander Lukashenka's thesis that it is time "to bring to power normal young politicians." The journalist makes a sad conclusion that the hour "X", which is so expected of change agents can be stupidly missed: "Belarus is lack of truly educated, hardened in a real fight, polished by practice, disciplined by responsibility political cadres. It's difficult to consider as such members of Parliament who do not solve anything, or languishing in the ghetto, the maximum – the leading online internecine wars, opposition figures.

Pro-Russian Column in Belarus – historian Victor Yevmenenko fixes the facts that on the basis of some non-governmental Belarusian organisations Russia plans to build a force that involves gaining widespread support among the Belarusians. The author predicts that this force can be transformed into a pro-Russian political movement so he wonders why Belarusian civil society, adhering to national-democratic positions, is passive and indifferent to the mentioned processes.

Does Civil Society Need the Political Track? – Naviny.by is trying to understand, whether civil society should follow the path of politicization or continue to do their civil work, despite pressure from the government. Referring to the recent adoption of the concept of the National Platform, the author notes some politicization and warns that "CSOs on the political field, would not be able to fully engage in their activities, also have the risk to narrow the chances of public recognition…and will not be able to fulfill their primary function – to show the people the possibility of self-organization."

Evolution of Images of "Enemy" and "Friend" in the Post-war Belarus and Ukraine, 1945 -1953 – the research shows that people born in the 1920-30, call Stalin a friend of the people, and in today's Belarus this place is taken by Alexander Lukashenka. Belarusian opposition is called as enemy, following with such epithets as "useless", "zero", "stupid". The study was presented at a round table held by the International Consortium "EuroBelarus" and the Centre for European Transformation in collaboration with the Heinrich Böll Foundation (Germany).

Public Opinion in Belarus on the Project "Modernization for Belarus" – In July and August 2012, the Belarusian Analytical Workshop conducted a qualitative study using a remote method of focus groups. The study summarised the opinions and judgments of different social groups on the socio-economic and political situation in Belarus, the geopolitical orientation of residents, their assessment of the initiative "European Dialogue on Modernization". The main conclusion of the study is that people consider the political leadership of the country as a root cause of poor economic situation and related social problems.

News without News – Mediakritika.by presents its monitoring of state and non-state TV channels for the period August-October 2012. The experts note that most of the materials of the state-run TV news programs generally were not news. The only reason for the broadcast was Alexander Lukashenka who’s ideas were supported by video illustrations. The violation of the standard of efficiency was also frequent in the news on the independent TV channel "Belsat".

Belarusians' Ideas of Human Rights and Rights Defense Activities – the study was conducted by the Centre for European Transformation on the initiative of Belarusian human rights organisations in April-June 2012. The purpose of the study was to identify concepts that exist in the Belarusian society regarding the relationship between the man and the state, human rights and their defense. The initial hypotheses were generally affirmed that: a) the set of issues that is being researched is not actualized in practices and beliefs of the respondents; b) the level of competence of the respondents as to the specified issues is not very high.

Damocles Sword of Anonymous Donations – Yuri Chausov, based on case of the magazine ARCHE which is now under financial investigation, expresses concern that formal suspicion of violating the law in the economic sphere can be a reason for the persecution of civil society institutions. The expert, in particular, draws attention to the legislative nonsense whereby anonymous donations in Belarus are not prohibited, but are treated as foreign aid, the use of which is tightly regulated.

State Budget 2013: a Collection of Surprises – Denis Lavnikevich, BEL.BIZ, analyzes the national budget for 2013 and comes to the conclusion that it is more like a set of good intentions. The expert believes that it will be possible to avoid the fiscal crisis in the next year only under two conditions: if Russia continues to supply Belarus with energy on current prices, and if the government finally seriously undertakes the privatization. The expert also cites Andrei Porotnikov, Belarus Security Blog, who points to the fact that next year's budget continues the trend of the last 20 years of chronic under-funding of the national army.

Business in Belarus 2012: Status, Trends, Prospects – IPM Research Center prepared an annual report on the status and prospects of small and medium business in Belarus in 2012. The issue considers the economic situation of small and medium enterprises and their development prospects, including analysis of the influence of the integration agreements with Russia and Kazakhstan in this field.