Conference of the Belarusian National Platform....

Public Statement of members of National Civil Society Platform. The leaders of a number of NGOs issued a public statement cautioning against politicization of Belarusian National Platform of Eastern Partnership Civil Society Forum, which they see in the proposed 2012 Strategy. In their statement leaders of 13 NGOs express support for the National Platform as a platform for communication and dialogue towards modernization of Belarus and its European integration. The signatories include Belarusian Association of Journalists, Belarusian Institute of Strategic Studies, Human Rights Center "Viasna" and others.

Republican Social Forum in Homel. On October 24-25, Republican Social Forum "Authority-Business-NGOs: Together Improving the Quality of Life" was held in Homel. Among the organizers there were Gomel regional executive committee, International Education Center (IBB), NGO ACT, etc. The number of participants was about 200 representatives of government agencies and NGOs, as well as German and Italian partners. The main idea of ​​the forum became the important role of NGOs in social work, the need for a mechanism of social contracting and the need to change legislation.

Forum of International Youth Projects in Hrodna. On November 24-26, Grodno will host the 1st Forum of International Youth Projects «U-Active: Networking for developing youth projects». The Forum is organized by an informal association of students of Hrodna University «Youth-In-Club». The forum name «U-Active» has a threefold meaning: “you active”, “active youth” and “active University”.

Constitutional Court endorses controversial amendments. Constitutional Court of Belarus upheld amendments to the law of mass actions and laws governing political activity. The decision was adopted on October 28. The bills toughening the rules for public events, as well as the conditions for political parties and NGOs were adopted by the House of Representatives on October 03 in two readings at a closed meeting for the media. The Upper House of parliament approved the document on October 21.

About a thousand people celebrated Dzyady (Forefathers). On October 30, in Minsk the Conservative Christian Party held a march to Kurapaty, where for the years of Stalinist terror more than 200 thousand people were killed. Among the participants there were many young people, including activists of the Young Front, the civil campaign "European Belarus", Belarusian Christian Democracy, etc. Since the action was sanctioned by authorities, the police did not intervene in the proceedings.

The New Grand Army of Lukashenka 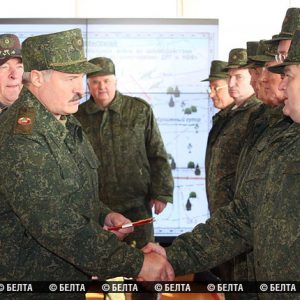 Following military manoeuvres in the south of Belarus last Friday, the Belarusian ruler put forth a completely new idea for developing public administration. He ordered the formation of a new army called the territorial defence troops.

The idea is reminiscient of what Muammar Gaddafi and Saddam Hussein once tried to do in their countries: effectively undermining national armies through the creation of parallel paramilitary and military units. Sounding oddly similar to the deceased Libyan colonel, Lukashenka said, “Territorial defence shall encompass the entire state and people. If necessary, we are going to spend huge sums on it.” At the same time the Belarusian leader gave generals' insignia to previously civilian governors of all six Belarusian regions.

“It is a fact that you are becoming general-governors, yet I emphasize it is not for demonstration or prestige – the human resources policy will be changed towards giving the people command of the territorial defense troops. We are creating, if you want, a new army in Belarus which will be commanded by you”. According to Lukashenka, the new army will have 120,000 troops. This is big number, as today the regular national army of Belarus has only 65,000 active personnel.

In the new circumstances regional administrators shall solve not only economic and social problems but are also responsible for the military component, said the Belarusian leader. “Our governors are military and responsible people, therefore starting today the second part of your life is military security. You should organize territorial defense maneuvers… There shall be concrete persons assigned to every automatic rifle, pistols, RPG, to every weapon.”

According to Lukashenka, territorial defence forces should cooperate with the conventional army. The experience of other countries (like Libya, Iraq or Iran), however, shows that such co-existence is both counterproductive and inefficient.

It is hard to find a plausible rationale behind the decision, yet in highly seclusive and person-oriented Belarusian politics, such a decision might indeed be taken by Lukashenka personally. He admits, “It is me who has taken the decision. If we do not learn today, then we will suffer the consequences tomorrow. For that aim no money can be withheld.”

Apparently security issues seriously worry the Belarusian regime ever since a new wave of popular movements struck at Middle Eastern regimes befriended by Minsk. Last summer, Belarus held manoeuvres explicitly aimed at training counter-insurgency and riot control. Meanwhile, Lukashenka openly discussd the possibility of creating an anti-revolutionary bloc of dictatorships which should have the right to intervene if a protest movement threatens to topple the government in any country of the alliance. With Russian support it would be a guarantee against regime change.

Lukashenka also strengthened the KGB and urged police and security services to strike at he opposition. And now the Belarusian regime is obsessed with restructuring the national security system through the so-called territorial defence.

It is quite innovative in these activities. For instance, earlier this week, Lukashenka talked of engaging businessmen in territorial defence, where they presumably could play the role of grassroots leaders. Such an approach may prove attractive for some entrepreneurs which are actually engaged with local authorities. The regime will have to rely on regional elites – a mix of businesses and state bureaucrats – to create their own little armies. That would create more opportunities for exploitation of their power, now also in the military sphere.

In the early 2000s the government allowed the local authorities down to rather low, district levels to ban the sale of products from other regions of the country, if such commodities were produced in the district. Despite being a serious violation of Belarusian law, such a prohibition has been effective for years in probably all regions of Belarus.

In any event, such an erratic move will ultimately be one more blow to the institution of the Belarusian state. The Belarusian national army will now probably get even less funding. Clearly the bankrupt government has no money for two armies and will now redirect the scarce resources to finance the new idea of Lukashenka. The whole country will turn into a field for egotistic local elites which have already for years disrupted the single economic space of Belarus. Now they will have even more means at their disposal to preserve their power while continuing mismanagement.

Businessmen are increasingly fusing together with the nomenclature, as only so can both survive in Lukashenka's regime. Now local rulers – and all of them are appointed by the president without consulting local residents – will have even more means at their disposal to preserve their power and continue mismanagement. They will not only arm themselves, they will also have more opportunities to handle local residents as they wish. Now male residents will become 'soldiers' and a local administrator may easily draft them anytime.

Lukashenka probably hoped to mobilize new forces supporting regime through this militarisation move. Yet there are sufficient reasons to think that even if such reasoning was a factor it may ultimately backfire. The local nomenclature clings to the regime only because they need resources and there is a lack of any alternatives. If there is an alternative, they may quickly abandon their boss together with their little armies.

No matter, who comes after Lukashenka, because of Friday's decision, the new authorities will have two more problems to fix – a destroyed military and rampant 'feudal' elites in the regions. The longer Lukashenka stays in power, the weaker the state institutions become.