Development remains one of the few industries foreigners eagerly invest in Belarus because of high and quick profit. Meanwhile, Belarus authorities struggle with other problems of urban development. They fail to properly regenerate the Old Town of Minsk and their policy of compaction of districts in already densely populated city causes protests of locals.

Although Belarus experiences economic stagnation and resists market reforms, the intensity of development and construction makes an impression of a thriving area. Indeed, development presents one of the few sectors that foreign companies readily invest in Belarus.

In this most cases foreign does not mean western, as investors come from Arab countries, Russia, Iran, Turkey and China. Serbian Astra Investment serves perhaps the biggest investor at the moment. Its projects, Majak Minska (Lighthouse of Minsk) includes a shopping and entertainment complex and several housing projects.

Construction especially flourished after 2009, when the International Ice Hockey Federation chose Minsk the venue for the 2014 championship. The event seems especially important for regime’s image and international legitimation, therefore authorities do their best to prepare the capital for the upcoming championship. The amount of work is substantial – Minsk definitely lacks tourist infrastructure.

However, as it usually happens in Belarus, people do not know how the deals are made.  This behind-the-scene politics causes discontent of the public. This discontent is fairly justified – very often good pieces of Belarusian land go to president’s friends without asking people’s opinion.

For example, in 2012 an official document with a mark “confidential” appeared in Belarusian Internet. According to it, Aliaksandr Lukashenka ordered to grant Qatar state (in fact its ruling family), lands near Minsk for building residence and open-air hunting cages.  Expensive lands near the capital should be granted for free for 99 years. Such generous presents of course are a part of bigger deals that the authoritarian leader makes with his Arab counterparts.

The Tragedy of Minsk Old Town 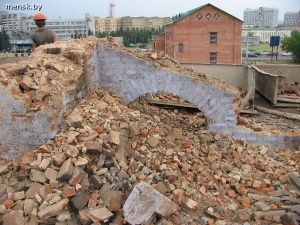 Most famous cases from recent decade include reconstruction of Old Town in Hrodna, a town with old European architecture in Western Belarus.

Authorities conducted reconstruction with numerous violations. They did not conduct archaeological excavations and damaged a layer of remnants of the mediaeval city; changed traditional planning of Old Town; destroyed some buildings and built them from modern materials instead of restoration. As a result, the biggest Old Town in Belarus turned into typical town of Lukashenka period.

Minsk is in a similar situation now. Poor reconstruction of Old Town of Minsk started in USSR already. Today, in independent Belarus the authorities continue to destroy the historical face of the city for reasons of quickness and minimization of cost. The 2014 ice hockey world championship makes the authorities hurry in their preparations.

Among the biggest problem of renovation experts name the destruction of former planning of the streets and buildings. While a single wrongly erected building can be destroyed and restored, the rebuilding of the whole planning seems hardly possible and will be extremely costly in future. Another task during regeneration is to preserve the past cultural landscape, but Belarusian authorities prefer to turn Minsk Old Town into a business-centre.

According to historian Zachar Šybeka, one of the best experts on Minsk history, normally the Old Town becomes conservation zone, where new construction is prohibited. In Belarus, he says, such norms do not exist in law. As a result, modern buildings appear in the centre. They overshadow the historical architecture and make the whole view ridiculous.

Sadly, authorities even abuse religious monuments like church complexes. Instead of giving them back to church, officials use buildings for state purposes. In one case, they even presented a plan to turn a former monastery building into hotel with casinos.

Rapid growth of construction results in the lack of free space in the city. Notably, Lukashenka prohibited the spread of the city and building on agricultural lands. Authorities offered an alternative solution – to boost “satellite towns” that lay near Minsk. Citizens that need housing can build it in those towns now.

However, new elite housing and business and shopping centres mushroom in the city, and somehow authorities manage to find land for them. Clearly, those projects are highly profitable and Minsk authorities do not miss a chance to earn some more cash and report to the top about their success.

The government promotes policy of compaction of some communities to create new places for profitable projects. This policy sparked social tension and protests of city dwellers. Politically indifferent Belarusian may become very active and aggressive when the deal concerns their property. Take for example the case of Uručča conflict.

In spring 2012 dwellers of Uručča district protested against building of several houses, some of them were assigned for riot police families. This fact stirred up the discontent with authorities because Belarusians perceive police as a part of the regime. Still, dwellers had no chance to win in this case.

Similarly, owners of the housing in the central district resist the plans of authorities to evict them or rebuild the part of houses and implement other projects. Such sporadic protests appear here and there and authorities have to compromise. They organise civil discussions, where experts, architects, officials and citizens discuss the construction plans.

So far, the discussions appeared not quite fruitful, as sides do not want to listen to each other and retain their positions. Nevertheless, authorities accept that such protests indeed prevented some projects or changed them. “Prevention of social tension”, the term that authorities use, shows that even in today's Belarus people can effectively defend their interests if they organise.

Economy Recuperates but Slower than Forcasted – Digest of Belarusian Economy

While economic growth seems to be recuperating in January and February, it remains below the wishful forecasts of the government.

At the same time, the situation with current account balance continues to be the pressing matter, as the government is looking for the money both to repay the debts and to finance its modernization projects.

The economic policy is once again trying to accommodate both the stagnating real sector and the need for macroeconomic stabilisation necessary to attract foreign funds.

GDP and The Real Sector

In January 2013 the year-on-year GDP growth was at the level of 103.1 per cent.  It is significantly below the official forecast of 8.5 per cent for 2013. Compared to the same period of last year the slowdown in growth took place in most economic activities.

The ban on exports of solvents and thinners, reduced export of potash and some deterioration in terms of oil deliveries from Russia explain the negative dynamics in manufacturing.

In January 2013, growth in the inventories of finished goods in stock accompanied output growth. If at the beginning of January 2013 the stock of inventories in manufacturing industry was equal to 52.8% of average monthly industrial production, and on February 1, 2013 it grew to 79.1%.

In the first months of 2013, the companies, according to the National Bank report, report reduction in volume of production and demand. At the same time demand for loans increases, and the liquidity-constrained banking system can not meet this demand.

In January 2013, an average wage decreased in nominal and real terms relative to December 2012. Average nominal wage amounted to 4368 thousand rubles (505 U.S. dollars), while last month it was 4741.3 thousand rubles (552.2 U.S. dollars). At the beginning of the year decline in revenue in general and population wages in particular had seasonal nature. Traditionally, wages grow at the end of each year due to bonuses and other additional payments.

A similar dynamic is also typical for consumer market. In January 2013 compared to the same period of previous year the retail trade turnover increased by 20.3%. At the same time, the reduction of the indicator relative to December 2012 was 21.9%. Retail trade boom in New Year and Christmas time stimulates the rise in consumer demand.

Because of problems with liquidity in January and early February 2013 the interest rates on interbank market reached the level of 37-38% per annum. National Bank was forced to carry out a number of operations in order to maintain short-term liquidity of commercial banks.

As a result, the lack of resources has been eliminated from the second decade of February. Interest rates at the interbank market declined to 19-20% per annum. Moreover, since the second half of February, there was a surplus of Belarusian rubles at the banking system.

The situation at the currency market can be characterised as relatively stable. In January-February 2013, the fluctuations of Belarusian ruble were more of opportunistic nature and ranged from 8570-8680 rubles per U.S. dollar. One of the negative factors on currency market was the excess demand for  foreign currency from the enterprises in January 2013. The net demand on foreign currency at this segment of currency market has developed as the result of reduction of foreign revenue.

At the currency market for population the excess demand on foreign currency compared to supply has been observed since the middle of 2012. Incomes growth and weak confidence to Belarusian ruble are the main reasons of the increased currency demand.

In February 2013, the Government has been considering the possibility to allow lending in foreign currency. However, the National Bank decided that this measure is untimely.

2013 and 2014 are the years when Belarus will have to make major payments on foreign debt. The amounts to be paid in 2013 and 2014 are equal to USD 1.7 bn and USD 1.4 bn. There are three possible ways to attract additional financing, which are eurobonds, privatization and FDI, and foreign loans.

Because of the economic crisis of 2011, in 2012 Belarus was not able to attract foreign capital through Eurobonds. Yields of 2015 and 2018 Belarusian Eurobonds were highly volatile throughout the last year. However, wise policy implemented by the authorities and National Bank, focused on macroeconomic stability together with punctual repayment of external liabilities, had a positive impact on the quotes of placed notes.

As a result, in the middle of February yields declined. Active preparation to the next issue of Belarusian Eurobonds started at the end of 2012. In November, a road show in Singapore and Hong Kong was organised with support of Russian banks “VTB Capital” and “Sberbank CIB”. In February, a similar event occurred in Europe. The placement of the next issue (worth around USD 700-900 mln) is expected to occur in March 2013.

Among other sources of external financing, foreign loans and privatisation continue to be the most important one. At the end of January Belarus received the 4th tranche of USD 440 mln of EvrAzES loan. In 2012, despite obtaining 3rd and 4th tranches, Belarus was not able to fulfil the requirements of state assets privatisation at amount of at least USD 2.5 bln.

Therefore, results of negotiations on allocation of 5th and 6th tranches will depend on success of privatisation process. According to the agreement, Belarus will have to sell at least USD 2.5 bln of state assets to obtain the rest of the loan.

However, there are threats of a slowdown in privatisation process in the nearest future. The law “On Amendments to the Law on Privatisation of State Property and Transformation of State Enterprises into Joint Stock Companies” will most probably come into force in April 2013 and will revive the golden share institute, which was cancelled in 2008.  This law brings changes to the management of the enterprises. It assumes appointment of state representatives even in joint stock companies without government ownership shares.

This law will have a negative impact on investors’ interest in Belarusian state assets or assets with minority shareholders, as their property rights would not be protected. Therefore, we can expect low demand on small and mediums state-owned enterprises. The only privatisation that one can realistically expect is the privatisation of big government enterprises by Russian corporations affiliated with Russian government.

This article is a part of a  joint project between Belarus Digest and Belarusian Economic Research and Outreach Center (BEROC) – a Minsk-based economic think tank.