Movement For Freedom invites to a summer school programme entitled 'Belarusian idea and the ways of national consolidation'.

The New Eurasia Establishment held in Minsk a USAID-supported workshop Financial Management for Non-profits for directors, finance and program managers from civil society... 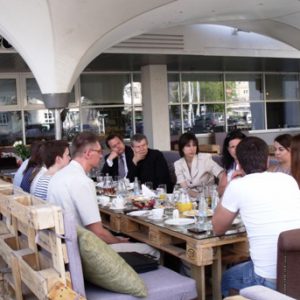 Movement For Freedom invites to a summer school programme entitled 'Belarusian idea and the ways of national consolidation'.

REFORUM project completed the preparatory phase. The project, implemented by the Belarusian Institute for Strategic Studies (BISS), over the next two years will offer 16 reform proposals, a dialogue between various stakeholders, including the opposition, authorities, experts and business. For the first six months the project has established relations with stakeholders, created a Council for the project and conducted a study to identify the attitude of Belarusians (society and civil society) to reform.

Food for Thought – 4. On 8 July at the Minsk café, Fond of Ideas held its fourth business breakfast in the series Food for Ideas. The theme of the breakfast was the policy of forming a strategy for social marketing. For the first time together with the businessmen representatives of Belarusian NGOs working with social projects attended the breakfast. The event took place as a part of a project to raise awareness about CSR in Belarus.

Information Day on European opportunities and gender equality. On 17-18 July the Office for a Democratic Belarus (Brussels) and the Office for European Expertise and Communication (Minsk) invite interested parties to information sessions in Brest and Hrodna. CSOs' activists will learn step-by-step how to prepare successful projects, get to know about available EU support mechanisms as well as learn about the incorporation of European values and cross-cutting issues (gender) into their project proposals and during the implementation of their projects. The event is being organised under the Clearing House project.

Round table on public administration. The civil campaign Tell the Truth conducted a regular round table on the issues of the efficiency of public administration, the prospects for reforming the power vertical and the need for modernisation. According to the invited politicians and experts, the modern system of the state decision making and implementing is closed of from public control and is not in line with Constitution. BIPART analyst Natalia Ryabova noted that one of the main problems facing public administration is a low level of training and retraining.

Belarusian Christian Democracy party (BCD) initiates a Minsk Forum of NGOs and civic initiatives. The Forum aims to solve the local problems of the Minsk citizens; among priorities are the elaboration of alternative plans for Minsk's development; coordination of Minsk civil and social initiatives; conducting campaigns to address actual local issues; civil control over the city authorities, etc. Journalists, however, doubt in the potential sucess of the new initiative and have stated that this is merely a way for BCD to try to expand its electorate.

CityDog.by launches a joint project with the Institute Strelka. Every week, the Minsk city online magazine CityDog.by will publish articles created by students and graduates of the Institute for Media, Architecture and Design Strelka (Russia). Architects, urbanists, sociologists will share knowledge how to study and improve the urban environment; the articles are designed to teach and motivate the readers of CityDog.by to improve the environment of Belarusian cities.

I Bike Minsk. From 10 July to 24 August a campaign I Bike Minsk will be held in Minsk and include about 20 different activities – workshops, street actions, lessons on how to ride a bike, bike tours and trips. Additionally, 60 bikes will be available to rent. According to the belngo.info

New Eurasia held training on financial management. On 8-9 July the New Eurasia Establishment held a workshop entitled Financial Management for Non-profits for directors, finance and program managers from civil society organisations. The event was organised in the framework of the USAID-supported Capacity Building for Civil Society Organisations project. Participants had the unique opportunity to learn about the specifics and professional secrets of financial management in non-profits.

School to study Belarusian identity. Movement For Freedom invites individuals to participate to a School 'Belarusian idea and the ways of national consolidation'. The School will be held from 24-29 August with the participation of well-known Belarusian experts, public figures and politicians. The School aims to consider the potential and opportunities for the consolidation of Belarusians in light of the new threats and challenges facing Belarus. Participation is open to Belarusians 18-30 years of age that are active in social and/or political sphere.

E-Teacher Scholarship Program. The U.S. Embassy in Minsk announces a call for applications from teacher trainers, tertiary/secondary teachers of English, and program administrators in Belarus to participate in one of the ten English Teacher Professional Development DISTANCE LEARNING COURSES provided through the University of Oregon. The deadline for submitting applications is 15 July 2014.

EU removes eight Belarusians from its blacklist. On 8 July the Council of the European Union lifted entry bans and asset freezes against eight citizens of Belarus and placed one Belarusian on its blacklist. A total of 225 individuals, including Aliaksandr Lukashenka, are currently subject to travel bans and all of them, and 25 economic entities, are subject to asset freezes.

Belarusian Delegation Visit to Brussels. On 8-10 July a delegation from Belarus, headed by Deputy Foreign Minister Alena Kupchyna, visited Brussels to take part in a second round of consultations with the European Union on modernisation issues. The delegation included representatives of the Foreign Ministry and the Ministry of Economy.

The most well-known international indexes show that Belarus is maintaining the potential of its people, although its governance, economy, political and economic freedoms remain at a very low level.

Belarus has had a rather good showing in the UNDP Human Development Index, the Legatum Prosperity Index and the Ease of Doing Business Index.

But the results of Economic Freedom Index, Press Freedom Index, Freedom House Index, Global Peace Index, Corruption Perception Index and Sovereign Credit Rating are nothing short of disastrous. In some of them, Belarus finds itself in close company with Third World countries.

Compared to other countries in the region, Belarus usually finds itself ranked above Ukraine or Russia, but lower than Poland, Lithuania and Latvia.

Below, we compare Belarus' current standing in the world rankings with those of 2010, when Belarus Digest first collected all available ranking data in one article.

Rankings in Which Belarus Had a Good Showing 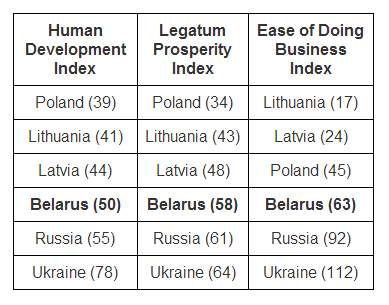 This index takes into account life expectancy, education level, and GDP. Belarus looks better than Russia (55th place) and Ukraine (78th position), but is worse off than Poland (39th), Lithuania (41st), and Latvia (44th). Notably, Belarus has actually improved its position since 2010.

The Legatum Prosperity Index, which measures wellbeing and satisfaction with one's life, ranked Belarus 58th while placing Russia at 61st, Ukraine at 64th, Lithuania at 43rd, Latvia at 48th and Poland, with the highest score in the sample, at 34th. All of these countries belong to a single group consisting of nations ranked in an upper-middle range. The Index demonstrates that Belarus has great educational and social capital, while its overall governance and economy are still in bad shape. According to these results, Belarus has moved up in the rankings since 2010.

Belarus occupies the 63rd place in the Ease of Doing Business Index. World Bank Group admits that people can easily start a business, register property or enforce contracts in Belarus, however it remains difficult to pay taxes or obtain a credit. As is in the case of the Human Development Index, Belarus is doing better than Russia and Ukraine, but worse that its neighbours from the European Union. Belarus has worsened its position since 2010.

Rankings in Which Belarus did not Fair Well 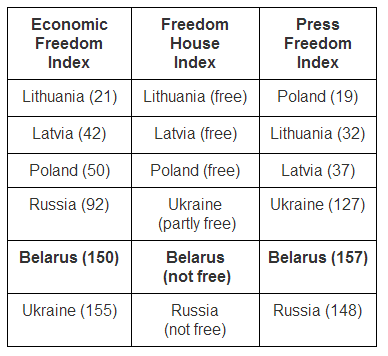 According to the Economic Freedom Index, Belarus remains a country with a mostly unfree economy and finds itself in the rankings inbetween Nepal and Ethiopia.

Belarus has severe issues with the rule of law, as well as monetary, investment, and financial freedoms. The Heritage Foundation and the The Wall Street Journal placed Belarus at 150th and Ukraine at 155th, both abysmally low rankings when it comes to overal economic freedom.

All the rest of Belarus’ neighbours appear to have more economic freedom. When compared to the results from previous ratings, Belarus has more or less retained its previous position in the index, acquiring only a few more points. In 2010, Belarus sat at 48.7 and was able to climb slightly up to 50.1 in 2014.

According to Freedom House's criteria, Belarus is an unfree country. Russia has approximately the same ranking, while Ukraine appears to be partly free. According to the 'Freedom in the World 2014' report, Poland, Lithuania, and Latvia are free countries. Belarus retained its previous position and has the same freedom rating as China.

Reporters without Borders show that freedom of the press in Belarus (157th place) is on a par with that in Swaziland (156th position) and Pakistan (158th rank). Ukraine occupies the 127th slot and the Russian Federation comes in at 148th place. While Belarus has improved its position since 2010, its EU-member neighbours make its ranking look all the more deplorable as Poland achieved 19th place in the rankings, and Lithuania and Latvia placed 32nd and 37th, respectively.

The Institute for Economics and Peace, one of the Economist's analytical centres, measures the peacefulness of 162 countries. Its Global Peace Index is utilises three main criteria: the level of safety and security in society, the extent of domestic or international conflict, and the degree of a nation's militarisation. Again, here Belarus has gained some ground since 2010. In the global standings, Belarus found itself ranked 92nd, routinely doing better than either Russia or Ukraine, but worse than its neighbours from the European Union. 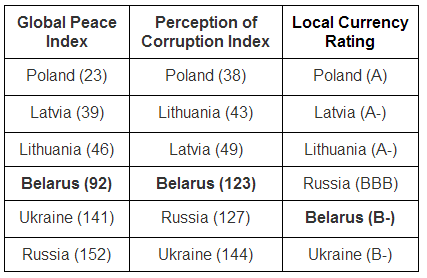 Transparency International regularly evaluates countries' perception of the level of corruption and this time around Belarus found itself ranked 123rd, the same as the Dominican Republic, Guatemala and Togo.

According to expert estimates, Belarus has improved its position since 2010 and remains less corrupt than Russia (127th position) and Ukraine (144th position), but performs poorly when compared to Poland (38th), Lithuania (43th), and Latvia (49th).

Sovereign credit rating is considered by foreign investors an assessment of the investments made in the economy of a particular country. Standard & Poor's assessed Belarus’ local currency rating, foreign currency rating, transferability and convertability to all be a B-. Unfortunately, in this index, Belarus has seen its position to have fallen considerably since 2010.

Where Belarus Gains and Losses

When Compared to 2010, Belarus improved its position in the Human Development Index, Legatum Prosperity Index, Press Freedom Index, Global Peace Index and Perception of Corruption Index. This is evidence that quality of life remains one of the primary tasks that the authorities work on, as they see economic stability as a means to legitimise their rule.

Belarus retained its previous position in the Economic Freedom Index and Freedom House Index, which shows that Lukashenka's regime is still opposed to political and economic freedom.

Belarus’ position in the Ease of Doing Business Index and Sovereign credit rating has worsened since 2010 for a number of reasons. Namely, the authorities have failed to implement a successful economic growth policy and do not see business development as a way out of their ongoing economic crisis.

At any rate, the rankings show that Belarus has great potential, but in the end continues to suffer from inefficient governance.