€3 Billion for Development of Civil Society in Belarus? 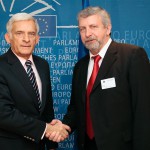 Jerzy Buzek, the President of the European Parliament meets with a Belarus activist Aliaksandr Milinkevich

In April 2010 Polish foreign minister Radek Sikorski promised Belarus authorities €3 billion in international aid. The condition was that the country would adhere to basic democratic standards. Now that Belarus authorities have started a full-scale war against the civil society and political opponents, they are unlikely to get any financial aid. If the Belarus regime is not going to get it, should the money then go to the Belarusians and the civil society of Belarus directly? That would be a logical thing to do. Even a fraction of this figure would help tremendously provided that the money reaches the recipient.

Belarusian civil society badly needs help from outside. They cannot get any support from within Belarus where everything is tightly controlled by the state. Nor it is easy for them to access resources abroad. It is important to make more funds available, but also to understand conditions in which Belarus NGOs and other civil society groups have to operate. These conditions are far from those in which NGOs operate in Belgium, Ukraine or even Russia. The government imposed restrictions similar to those which existed during the Cold War. The support strategy of international donors should be adjusted accordingly.

Currently, Belarus civil society groups applying for use of EU funds have to undergo lengthy registration procedures in Belarus and which eventually end in arbitrary rejections. On the other hand, NGOs have to comply with strict bureaucratic criteria of the EU agencies in charge of resource allocations. The EU goals are clearly undermined when the projects approved for funding are vetoed by Minsk or when the EU assistance is given to government-controlled organizations, eligible for EU grants. The EU procedures need to be revised taking into account the constraints imposed by the official Minsk.

The main weapon of the Belarus regime is not beating by the police, harassment by the KGB or prison sentences. They have something more effective. First, it is propaganda and, second, the fear of people to lose their jobs. Both can and should be addressed by the international community.

Breaking through the information blockade

Despite the recent progress with the TV channel Belsat broadcasting from Poland and efforts by Deutsche Welle and European Radio for Belarus, independent media penetration remains low and does not reach the general population. The EU needs to step up its support for independent media and increase TV and FM broadcasting to Belarus from Poland and Lithuania. If the Belarus regime will lose the propaganda battle, it will lose the war. The Belarusian regime understands that and uses more repressions against journalists than against any other group. Like the Soviet society, the Belarus society is based on lie, which can be effectively exposed by independent and accessible media.

It is also important to help the repressed activists stay inside Belarus. The Belarus authorities tightly control virtually all employers in the country and many people are dismissed for their political activities. In the absence of any other opportunities in the country, those people have to leave Belarus. Most of them would be happy to stay if they could earn at least something to make ends meet in Belarus. The international community can and should help such people to stay in Belarus and remain active in their communities.

One way to do it is to create jobs for activists inside Belarus (e.g. research projects). Also, it is possible to create temporary job opportunities abroad so that people could leave, earn some money and go back to their families and communities. It is much more difficult to bring up a new generation of activists than to retain those who are already active. In addition, many European countries would benefit from cheap labour force from Belarus.

To that end, European countries should also radically simplify procedures for obtaining visas and work permits for Belarus citizens. Currently, to get a Schengen visa Belarusians need to collect many documents showing that they have stable income. But how can a Belarusian civil society activist struggling to find a job and make ends meet produce all those documents?

According to the 2009 monitoring report by Stephan Batory Foundation, with the adoption of the Schengen visa regime by new EU Member States in December 2007, the number of visas issued to Belarusians to travel to neighboring Poland and Lithuania has decreased by 73% and 52% respectively. This amounts to “a new ‘Iron Curtain’ on the eastern Schengen borders,” according to the Foundation’s assessment. As a result, many have to leave the country, often illegally, seek political asylum never to return to Belarus again. Traveling from Belarus and back to Belarus should be made as easy as possible.

New scholarship programs and incentives to return to Belarus

The EU also needs to establish new scholarship programs for Belarusian students. Ideally, these programs will not only teach the young people about democratic norms, but also encourage them to return in Belarus and share their knowledge with others. Special programs for those people, for instance research grants or funding for civil society initiatives, would help tremendously. Such help should be offered bypassing the official Minsk. This involves risks for those people but there are many courageous people willing to take those risks.

It is time to become realistic about the Belarus authorities. Following the unprecedented violence in December, Belarus authorities still keep most of presidential candidates in prison, make more arrests and searches of human rights and opposition activists every day. Activists are thrown out of jobs, opposition parties are kicked out of their offices. The international community should recall how it supported Polish dissidents and democratic organizations during the Cold War and apply those lessons to Belarus today.

Germany in Favor of Sanctions against Belarusian Authorities 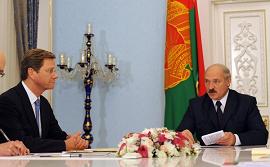 Reporting on Belarus in Germany has not stopped with the beginning of the New Year. While the liberal Minister of Foreign Affairs, Guido Westerwelle, is deep into trouble as his party threatens to withdraw its support to the leader at the annual party congress on January 6th, German foreign policy makers are struggling to find the right approach to Belarus.

All of them, however, share the fear to have an impenetrable dictatorship at the doorstep of the EU. In a guest commentary, Green Member of Parliament, Marie-Luise Beck wrote in Frankfurter Allgemeine Zeitung on January 5th:

When the regime crushed down the opposition violently, the West stayed strangely silent. In the Ministries, in the best cases the spokespersons formulated lukewarm protests. (…) Why did the EU not organize a special summit? Why did Messrs. Westerwelle, Sikorski, Bildt and Schwarzenberg only write an article in the New York Times but did not travel to Minsk immediately?

As a protest to the persecution of opposition activists, the Federal Government is in favor of EU-sanctions against the authoritarian regime of Alexander Lukaschenko.

Before taking a final decision, consultations with other EU member states are going to take place. Guido Westerwelle told Frankfurter Allgemeine Sonntagszeitung on January 2nd that Germany is not going to accept the election fraud in Belarus. “We are going to urge the EU to give a clear political answer to the free and fair elections in Minsk”, he said.

This statement is remarkable for a German government. In comparison with his predecessor Joschka Fischer, who was minister of foreign affairs in the Schröder’s Socialist-Green coalition from 1998-2005, Westerwelle finds clear and astonishingly harsh words and is ready to take action against the Belarusian authoritarian regime. Angela Merkel has shown several times that the respect of human rights does not remain an abstract concept for her government. It is therefore likely that the German government will speak in favor of the reinstallation of sanctions during the EU summit, as Westerwelle has announced.

The forced closure of the OSCE office in Minsk and the critical reaction to this step are mentioned in all newspapers. During a phone conversation with his Lithuanian counterpart Audronius Azubalis, who is chairman of the OSCE at the moment, both ministers agreed that the strengthening of the civil society is a priority now. According to him, this should be done by continued work of the Media Freedom Representative of the OSCE and the ODIHR. Both decided that the EU must find a clear and common answer. The COPS (Politics and Security Committee) will discuss further steps to be taken by the EU in its Friday session. (Press release of Auswärtiges Amt, January 4th).

Apart from installing sanctions against the regime, visa facilitation for Belarusian citizen is discussed in Germany. Marie Luise Beck, Green Member of Parliament wrote in her guest commentary in Frankfurter Allgemeine Zeitung on January 5th:

The really important step to facilitate travelling to the West for Belarusian citizen has not been taken. The EU claimed that it was not possible to liberalize the visa process for citizen of an authoritarian state. With other words: The EU helped the dictator to lock his citizen up in his country.