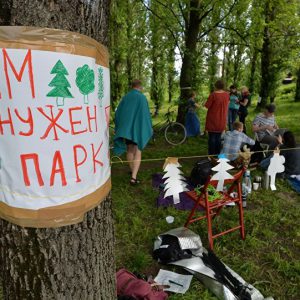 Amendments to Internet control prepared secretly from the public. Nobel prize winner Svetlana Aleksievich will open an intellectual club in Minsk. What do Belarusians Think public discussion on 2 June will dissect pension reform. This and more in the new edition of Civil Society Digest.

Sixth episode of The City reality show continues to acquaint with urban activists and educational program for them. In this week episode, the fellows painted the fence and removed the trash in a park in the rhythm of capoeira. Organised by the Centre for Cultural Management, The City weekly reports on 20 grassroots activists who fight for the prize money to implement social projects on the ground.

And park, and church. How it's possible to agree. Andrej Jahoraŭ, the Centre for European Transformation, parses a local conflict over the construction of the church, followed by the cutting of trees in the Minsk park Katoŭka. The expert believes that the issue isn’t in ecology or violations of the rights of believers, but in decision-making at the local level. The conflict is caused by the practice adopted in Belarus when the society is actually excluded from the decision-making processes.

Urban Myths festival opens a new season. The project brings prominent street artists to Belarus to create a series of murals based on local content. Now in Minsk, the Spain artist Deih is trying to combine his traditional theme of Universe with the Belarusian mythology. In 2015, street art community Signal organised the first Urban Myths festival in Minsk with two graffiti rated within the top 10 of the month in the world.

Crowdfunding platforms report their achievements. Talaka.by informs that for the recent 12 months 203 new projects have been posted on the platform; the fastest Belarus' crowdfunding campaign was completed for 8 hours – raising money for a known athlete to attend competitions abroad. Fro the recent month MaeSens.by has collected Br365 mil (around $18,6K) for assisting creative, social and charity projects.

Book about Piotr Martsev collects money through crowdfunding. Kyky.org chief editor Sasha Romanova publishes a provocative book of memoirs about Piotr Martsev, businessman and founder of the Belarusian independent newspapers BDG and Imya. A crowdfunding platform Ulej.by hosts a campaign to raise money on the printing of the book. For the first two days, the campaign has collected more than 62 million rubles (around $3,1K) – 41% of the required amount.

Nobel laureate Svetlana Aleksievich to open intellectual club in Minsk. Aleksievich informed on her plans during the master class organised by Press Club Belarus. Starting from September, the Club's meetings will be held in the Minsk TUT.BY gallery, with the participation of the world famous intellectuals. The Club will have its website to provide information on the lectures and invited guests.

Presence Code anthology. On May 18, Flying University and the Belarus Collegium presented an Anthology of 2000-2015 Belarusian thinking titled Presence Code. The anthology allows seeing the intellectual and cultural contribution made in 2000-2015 and contains the texts of different genres and styles – manifestos, metaphysical reasoning, criticism and others to understand Belarus.

Reporter gets moral damage compensation for unlawful imprisonment in KGB. In 2012, a reporter Anton Surapin spent a month in the KGB detention centre for allegedly aiding the teddy bear airdrop team. Now, with the help of BAJ lawyers, Surapin won 8 million rubles (around $400) for the moral damage. This is the first precedent in years when a person, who had been recognised a political prisoner, succeeded in his claim for compensation.

Amendments to Internet control prepared secretly from the public. On May 16, the Belarusian Association of Journalists (BAJ) got an answer from the Ministry of Information on its request to reveal details on drafting a new law to control the Internet. The Minister answered that BAJ’s request “had been taken into account” without any other clarifications.

Activist held in ‘cycling case’ faces formal charges. Dzmitry Palijenka, an activist detained after the brutal dispersal of the Critical Mass cycling event on April 29, has been officially charged with using violence against a police officer (Article 364 of the Criminal Code). On May 12, three more cyclist activists were fined of Br840,000 (around $45). Environmental CSOs have launched a campaign and flashmobs to support participants of the Critical Mass.

What Belarusians think on pension reform. The topic of the pension reform’s implications will be discussed on June 2, in the Minsk Gallery TUT.BY with online broadcasting. A BEROC expert will present economic impacts on the pension system because of the ageing of the population. A series of live discussions What Do Belarusians Think is organised by OEEC in partnership with the Belarusian Research Council, Pact and supported by USAID.

Infographics on European Cafe's results. The project European Cafe – Open Space of Europe has summed up the results of a customs survey to get feedback on its activity. Since 2011, the project aimed at integration of the Belarusian society into the European space, has organised 60 lectures with experts from 16 countries, with over 3,000 people attended. 96% of respondents answer that they have a positive impression of the project. The infographics was made with the methodological support of Pact.

Emigre politician makes trip to Belarus. Opposition Belarusian politician Siarhiej Navumčyk arrived in Minsk on May 24 on his first visit to Belarus in 20 years. The 55-year-old politician works in Prague for the Belarusian service of Radio Free Europe/Radio Liberty. In September 2015, opposition politicians Alieś Michalievič and Viačaslaŭ Siŭčyk returned to Belarus after years of self-imposed exile.

The Costs of the Economic Downturn – Digest of Belarus Economy

And оn 22 May 2016 the Minister of Finance Vladimir Amarin has announced budget cuts appealing Belarusians to live within one's means. The Belarusian population is paying for mistakes made by the government focused on preserving inefficient state enterprises.

Toxic Assets: Bogging Down in Debts

On 6 May 2016 the Chairman of the Board of the NBB Pavel Kallaur has said that projected dynamics of troubled assets indicate a possible rise of bad debts for banking system in Belarus, but he assured that the situation stays manageable.

Meanwhile, the share of toxic assets in the Belarusian banks increased in March by 4.3 per cent consuming the 11.5 per cent of their total assets. As a result, its current level became the new high for the banking system of Belarus. The previous record lasted only three month, when on 1 January 2016 the share of toxic assets of the Belarusian banks reached 6.8 per cent.

All these happened due to high level of debt load of borrowers and the continuing devaluation of Belarusian ruble that negatively influenced the ability of Belarusian enterprises to fulfill credit obligations to banks in time. For example, for the first three months of 2016 the share of loss-makers in manufacturing reached 34.2 per cent.

Further, according to the rating agency Fitch Ratings the share of troubled assets will grow gradually even if in the second half of year the economy will begin to recover. However, 3 per cent GDP drop in the first four months of 2016 seriously questioned such a scenario.

Thus, the agency warned that in order to control the situation the special organisation aimed on operations with such assets should be established.

According to the IMF forecast the Belarus's GDP will fall again this year by 2.7 per cent adding additional pain to economic misery of 2015, when GDP fell below the 2010 and 2008 levels reaching $54.8bn in terms of average annual exchange rate of the NBB.

A small growth can start after 2018 and only due to the so-called "low base effect", when the fall reaches the bottom and starts at least some minimal growth.

Meantime, taking above forecasts into account the Prime Minister Andrei Kobyakov on 18 May 2016 has proclaimed that Belarus urgently needs to speed up the involvement of the market-based instruments in next three directions – exports, employment and investment – to stimulate economic growth.

For export promotion Belarus’s government expects to diversify sales equally in three destinations (Eurasian Economic Union, European Union, other countries) by 2020 in order to escape from overwhelming dependence on the economic situation in specific countries (first off all Russia).

As a result of substantial reliance on eastern neighbour trade balance considerably deteriorated (see Figure). Particularly, it damaged sales in the famous Belarusian export "Trucks" category – since 2013 the annual exports decreased by 64 per cent reaching only 3.9 thousand items in 2015.

Concerning labour market the government determined the employment target of 50 thousand new jobs as a priority for local authorities in Belarus. Finally, the investment program for 2016-2020 supposes attraction of foreign investments in the amount of $30bn for the metallurgy, engineering, electronics, optics and ICT in the first place.

On 22 May 2016 the Minister of Finance of Belarus Vladimir Amarin has announced the reduction of budget expenditures by BYR15trn or about 7 per cent. The optimisation originally concerned non-priority items only (subsidies to local budgets and reduction of financial support to SOEs) without spending cuts for social sector (salaries, social benefits and medicines).

The Minister claimed for effective use of budget resources in order to achieve greater results. However, experts doubted about such an emergency decision. According to Belarusian economist Sergei Chaly planned budget cuts represents actually a huge amount – any adjustments higher than 5 per cent may have a very depressive effect on the economy.

Later, on 27 May 2016 the Deputy Minister of Finance of Belarus Maxim Ermolovich has questioned the issue of reduction of public expenditures even further saying that the issue of social cuts still stay under pressure. According to him solution of this problem depends on the possibility to reduce capital expenditures, which are also of high priority for the government.

As a result, the pessimistic forecasts made by economists of the IPM Research Center (about 2.2 percent poverty increase in Belarus measured as the share of the population living below the absolute poverty line) may become a reality even faster and hit more than 7.2 per cent of Belarusians.

According to their opinion children and adults that due to any circumstances have the worst labour market prospects remain the most vulnerable population groups of Belarusians to risk of poverty.

Thus, it seems that the Belarus’s economy still pays its bills for wrong economic policy decisions made in previous years. Overindebted state-owned "giants" and dragging down banking system leave no choice for government but to cut budget expenditures. Further, as it always happened the main costs for economic mistakes seem to incur by simple Belarusians.