Belarus-Russia relations Belarusian language Belarusian military travel to Belarus
Why Support Belarus Digest? Donate
BelarusDigest > All > European Humanities University: To Be Belarusian or Not To Be

European Humanities University: To Be Belarusian or Not To Be

The European Humanities University (EHU), the only truly independent Belarusian university in existence, has struggled to live up to its great promise.

After being closed by the Belarusian authorities in 2004, the need for a vibrant and innovative university tailored... 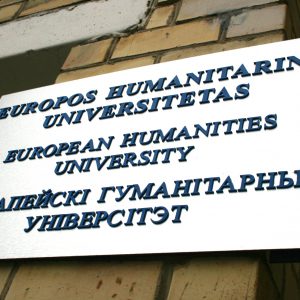 The European Humanities University (EHU), the only truly independent Belarusian university in existence, has struggled to live up to its great promise.

After being closed by the Belarusian authorities in 2004, the need for a vibrant and innovative university tailored primarily to Belarusians, resonated with many international donors and received their support to re-open in Vilnius in 2005.

Years of conflicts between the university management and academics, mismanagement and an administration adverse to reforming the institution has been widely covered in Belarusian media recently.

As EHU's Board moves to select a new rector in the coming days, they will either reaffirm its Belarusian identity – or bury it once and for all.

The Case for Change

It is easy for an outsider to get lost in all of the details surrounding the current dilemma facing EHU.

The university is located in Lithuania, an EU member state, but institutionally exhibits very little desire to become more "European".

Recently, EHU professor Maksym Zhbankov wrote an op-ed on the Nashe Mnenie web site about this paradox. He explained that the institution's exile nature isolates it simultaneously from both the EU and from Belarus, making it somewhat immune to internal and external criticism:

Internally, [EHU's exile status- ed.] means that it needs to maintain its [established] vertical of power (including suppressing any private attempts to get involved in what we consider to be external/repressive attempts to influence 'our' understanding [of EHU- ed.]).

Externally – the periodic attempt to garner compassion and empathy, the regular public articulation of our special sacrifice affirms the status of our institution.

Under these conditions remaining foreign is favourable in both senses: as a victim of totalitarianism, [we] have special privileges and are not obliged to live by your rules, but as refugees [we] are able to safely construct [our] own brand of democracy at a safe distance.

In a way, EHU became a miniature version of Belarus over the years. Its founder and former Rector Anatoli Mikhailov, 75, was criticised for being authoritarian and increasingly treating the university like his own personal institution.

Recognising the need for change, the EHU Board encouraged Mikhailov to retire from his post as Rector and consequently created the special honorary post of President just for him. Yet, judging by the recent actions of the Board and its current administration, their idea of change is at odds with the institution's original mission.

Members of the faculty, student body and alumni have been publicly complaining that EHU is losing its distinctive identity since the new administration took over. The university's latest version of its Charter, for example, (updated in September 2014) has removed the term "Belarus" from its mission statement (a document approved by EHU's Board) – just one of many signs that a gradual shift away from its Belarusian roots is well underway.

After granting Mikhailov his new honorary role, the Board launched its call for a new Rector in October 2014. While EHU has decided to not publicly announce the names of the 7 finalists for the Rectorship. Several undisclosed internal sources have reported to Belarusian media outlets that there are between 3-5 top contenders. They include:

Almost all of the candidates have some background in university administration, though their backgrounds vary. Krautsevich was the former Vice Rector of a Belarusian university but was subsequently forced out of his position by the authorities in the 1990s due to a difference of opinion. Milinkievič, a Sakharov Prize winner and a well-known opposition figure in Belarus and abroad, headed the Faculty of Physics at the University of Sétif in Algiers between 1980 and 1984.

Shchyttsova​ is also very familiar with EHU, having worked at the university since 1994. Darius Udris, who became Vice Rector for Development and Communications in 2011, has over a decade in program management experience and communications combined. He has been at the centre of the university's development the past several years.

David Pollick, however, is rumoured to be both the Board and Anatoli Mikhailov leading candidate.

Originally, Pollick was brought in as a managing consultant by two members of the Board, Gregory S. Prince, Jr. and Dan E. Davidson, whom he is on friendly terms with. In December 2013, the university's Board hired him to serve as its provost and CEO (now Acting Rector). The position would appear to have been created just for him as no such position exists in EHU's Charter.

His track record raises questions whether this move was warranted. While serving as President of Birmingham-Southern College, the small school's deficit rose for several years in a row and he was personally embroiled in a scandal that led to a $5 million budget shortfall.

His current remuneration, which according to the New York Times is $150,000 and is rumoured to be twice as much, is an absolutely exorbitant sum by local standards. He does not speak Belarusian or Russian and his ability to understand the needs of a Belarusian university in exile have also been questioned in the past.

EHU is currently looking at roughly a €1 million gap in its 2014 budget – and according to Belarus Digest's sources familiar with the situation there is still no official budget ready for 2015. Pollick's official salary not been made public. For a donor-supported institution, this disturbing lack of transparency and poor planning is a real reason for concern.

The European Humanities University is the educational institution that Belarusian society has always pinned their hopes on for the preparation of a national elite. EHU today faces a very important choice – a new rector, on whom the university's development will depend. We call for the preservation of EHU's "Belarusian heart". We call for EHU's Rector to be a Belarusian citizen.

A number of publications in the Belarusian media all focus on the same message – the ideals and spirit with which EHU was created should not be abandoned at this crucial juncture in Belarus's history. As is their duty, the Board must step up to reaffirm its Belarusian identity and demand complete openness and transparency in all matters concerning the university, especially when it comes to financial matters.

Financially, a move away from its Belarusian identity would be disastrous. Several donors already indicated to Belarus Digest that they would support EHU only if it remains Belarusian and were ready to pull out funding otherwise.

As an institution almost entirely dependent on donor funding that is directly tied to its Belarusian identity, abandoning it will likely lead to a majority of donors withdrawing from the project altogether – something that EHU is unlikely to survive. 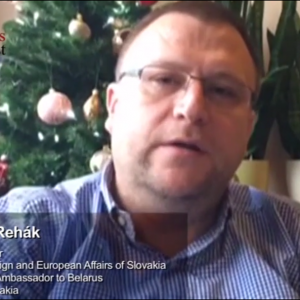 We asked our readers to say what they think about Belarus and why they support us.

Watch what Bruce Bucknell, Abraham Epton, Ľubomír Rehák and Matthew Rojansky have to say and their holiday greetings.

If you also like reading our articles please support us with a donation or subscription.