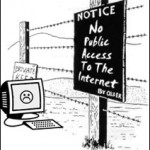 Something that every internet user in Belarus feared has finally happened. On February 1, 2010, Alexander Lukashenka signed a decree imposing censorship on the internet, approximately one year before the next presidential election. Lukashenka had previously been criticizing “anarchy on the internet”. After placing most of the traditional media under its control, the regime is pursuing an offensive against new media. The presidential election is scheduled to take place in early 2011 and Lukashenka plans to “win” again, (the last two presidential elections wherein Lukashenka retained power were widely viewed as fraudulent). Thus far, the internet has been one of the last places to express independent opinion in Belarus. The political opposition is fearful of being without any media access during the upcoming elections.

Under the new decree, internet providers, websites and internet users will be strictly controlled by the government and a special unit of the Presidential Administration – the Operating and Analytical Center. According to the decree “On Measures for Revising Use of the National Segment of the World Wide Web”, through an agreement with the President, the Center will define the list of “telecommunication operators, which have the right of direct access (interconnection) to international telecommunication systems, and authorized Internet service providers”. Any activity of a provider can be stopped by a decision of the Council of Ministers. The Center will be able to forbid access to information considered to be illegal according to Belarusian legislation and will control the registration of “.by” domain names. An internet service provider will be able to stop rendering internet service to anyone in cases that they find to constitute a “gross violation of law, further violation of the decree, and other acts of legislation”.

Introduction of the scandalous decree resulted in criticism by the international community including the EU, OSCE, human rights organizations and the Belarusian Diaspora worldwide. The EU’s foreign policy chief, Catherine Ashton, said that the decree “is going to further restrict freedom of speech and freedom of media in Belarus after it takes force”. The EU regards this issue as an important step in the wrong direction and hopes the Belarusian authorities will review it. The OSCE has prepared an expert assessment of the decree, and provided the Belarusian government with a set of recommendations that include the following:
– Abolish mandatory identification of internet service users and their technical means used to connect to the internet.
– Clarify the meaning and procedure of introducing limitations and bans on spreading illegal information.
– Clarify the scope of responsibility of internet service providers in the event of failure to comply with an order by a relevant body to eliminate violations or to suspend internet services.
– Envision requiring state bodies and other public organizations to publish information not only on their activities, but also information which results from these activities.
– Abolish the requirement to include hyperlinks to the original information source in media outlet materials disseminated via the internet.

At the same time, activists of the Belarusan-American Association staged numerous protests against internet censorship in Washington and New York. The recent protest in front of the Newseum in the U.S. capital was supported by the international press watchdog group, Reporters Without Borders and covered by Voice of America. “Last year, the Belarusian government claimed that China was a model in terms of internet control. This year, President Lukashenka signed a decree subjecting online access to an identity check or to prior online authorization dependent on the content and the applicant. Now, in Minsk, people will censor themselves, which is the worst violation you can impose on freedom of speech”, said Clothilde Le Coz, Washington Director of the Reporters Without Borders, in her address to the protesters. In its monitoring of online freedom, Reporters Without Borders has, until now, classified Belarus as a country “under surveillance” because it has only one internet service provider, (Beltelekam), because access to opposition websites is blocked during major political events, and because internet café owners are required under a February 2007 decree to alert the police about customers who visit “sensitive” sites and keep a record of all the sites visited during the previous 12 months on each computer, making the information available to the police if requested. If more far-reaching internet censorship is imposed in Belarus, as contemplated by the new Decree, the country would be added to the list of countries such as North Korea, China and Iran, which are notorious for blocking internet freedom.

The Decree “On Measures for Revising Use of the National Segment of the World Wide Web” is to take effect on July 1, which does not leave much time to work out a comprehensive strategy. For years, the internet has been viewed by international experts as a key vehicle for promoting democracy in Belarus. In a worst case scenario, the internet will not be an area of free speech anymore. This would force the international community to find answers to tough questions. The U.S. and the EU should work together to facilitate international pressure on the Belarus government to compel a review of the onerous decree. The international community should promote public discussion on internet censorship in Belarus by organizing information campaigns, protests, conferences, mobilizing media and other grassroots activities. In this difficult situation, sufficient support should be provided to satellite TV and FM radio broadcasting.

Viachaslau Bortnik is currently pursuing an MA in Public Administration at the American University in Washington, DC.

In February 1917, a small boy is running with his mother on the streets of wintry St. Petersburg. The mother pulls him to a back street to one of the magnificent avenues of the city of the tsars. There are many people running around. They wave red flags, they sing and shout. The mother says, "Look, Boris!" The boy shifts from one foot to the other – "I want to go home, mama, I'm cold!Boris Kit was born on 6 April 1910 in St Petersburg (then Petrograd).

As a young kid he witnessed the Russian revolution. In 1933, he got his Master's degree from Vilnius (then Vilnia) University and began to teach mathematics at the Belarusian Gymnasium. In 1939 he became its director.

After Stalin incorporated Vilnia into Lithuania, Kit moved to Western Belarus where he worked on establishing Belarusian schools. He was briefly imprisoned by the Nazis and then had to flee Belarus at the end of the World War II. Boris Kit has made a distinguished career as a rocket scientist and a professor at the University of Maryland in the United States.

Michael Scanlan, Charge d’Affaires in Belarus, recently named Boris Kit and Tadeusz Kosciuszko as two Belarusians who have made profound contributions to the development of America.

Boris Kit moved back to Europe from the United States in 1970s. "I am happy here and I am a European in my heart" says Boris Kit in his Frankfurt home. In his interview with Radio Liberty Boris Kit explained that remaining intellectually active and helping people helped him live so long. Here is a short interview with Boris Kit in Belarusian.