Is Belarus Willing to Help People with Disabilities? 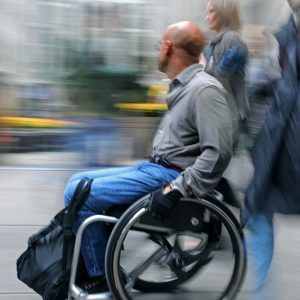 NGOs and initiatives created by disabled people themselves are having greater success in changing infrastructure. For instance, the first beach for people with disabilities in Belarus appeared thanks to the initiative of a single person, Alexandr Audzevich.

In contrast, the state’s approach is somewhat more ‘formal’: although it signals its intention to improve disability policy by signing international documents, it generally fails to actually implement the programmes, as it proved in 2011-2015.

The status of people with disabilities in Belarus

In 2015, Belarus became the last country in Europe to sign the Convention on the Rights of Disabled Persons, ratifying it in November 2016. The ratification guaranteed the creation of an additional monitoring body to oversee reforms associated with the rights of the disabled.

Officially, 556,000 people in Belarus receive a disability pension. This is about 6% of the total population. At the moment, the pension ranges from $12 to $112 per month, depending on the degree of disability. This amount is several times less than the average salary of Belarus as of May 2017. 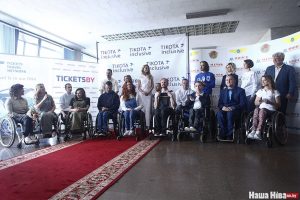 On top of small pensions, the situation is complicated by the lack of appropriate infrastructure for people with limited mobility capabilities.

According to unofficial data, about 70% of wheelchair users never leave the house. Therefore, a barrier-free environment is becoming one of the central focuses of campaigns involved in protecting the rights of persons with disabilities.

The first step towards improving the conditions for disabled people in Belarus, announced in June of this year, has been the introduction of free assistance to those with severe disabilities and disabled children. The state will now provide persons with disabilities with necessary medicines and equipment.

However, despite certain positive changes, Belarus is already proving that it cannot follow through on its promises. For example, in 2011-2015, the Belarusian authorities pledged to make local environments more barrier-free. However, in reality, structures meant to make life easier for people with disabilities are not functioning as they should. It is not clear whether the signing of the National Plan will lead towards measurable improvement of the situation of disabled people in Belarus, or if it’s just another formality.

Civil society as an engine of change 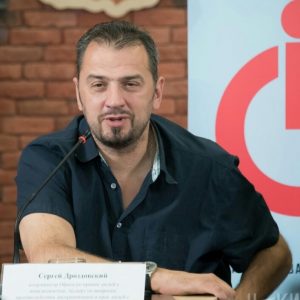 Today, those most actively promoting implementation of the provisions of the Convention are not the state, but NGOs and individual activists. Thus, the Office for the Rights of People with Disabilities, which is actively engaged in advocacy of the rights of persons with disabilities, presented a detailed plan at the end of 2016 for reform of disability policy. The reforms have yet to take effect.

The state seems to have few intentions of protecting people with disabilities. Even the Head of the Office for the Rights of People with Disabilities, Siarhei Drazdouski, has encountered problems with the authorities. He and his wife were threatened with eviction from the dorm where they live. Thus, instead of providing social support, the authorities are putting Drazdouski at risk of ending up on the street, writes radio Svaboda.

In 2014 in Hrodna, a small group of people, both with and without disabilities, tested access to various city facilities for wheelchair users. During their investigation, they revealed many violations and were able to pressure certain public institutions into improving their accessibility. However, it is often up to activists to fix accessibility problems themselves.

Some Belarusian organisations receive international support because they lack the protection of the state. For example, USAID has financed the activities of BelAPDIiMI, an organisation advocating for the right of young people with disabilities.

One campaign in particular, which aimed to draw attention to the plight of people with disabilities, attracted a significant amount of attention both at home and abroad. Alexander Audzevich, a wheelchair user from Lida who initiated the campaign, began his activism in 2013, after a motorcycle accident in 2011 left him partially paralysed. This prompted Audzevich to begin advocating for disabled rights. 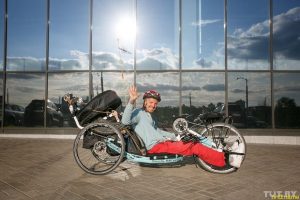 In 2016, he cycled around Europe in a handbike; his aim was to raise funds for the construction of a multi-purpose centre for wheelchair users in Lida. During his journey, Audzevich was able to raise awareness not only among the Belarusian media but also in the foreign press.

This year, Audzevich won the television show The City, which broadcasts interesting projects aimed at improving infrastructure. Due to his activism, the authorities built the first inclusive beach in Belarus, located in Lida.

Activists of the Republican Wheelchair Association have been independently arranging integration camps for people in wheelchairs for many years now. The state is not doing enough to rehabilitate these people or ensure they can participate in society. At the camps, people learn to serve themselves, to swim, to engage in other types of physical activity, and even the basics of sex life.

Is there any real improvement?

Many projects for the rehabilitation, integration, and socialisation of people with disabilities are carried out in Belarus using money from international donor organisations. This support amounts to several million dollars a year. However, an 18% tax is levied on the cost of office rent, utilities, and staff salaries.

On 31 August 2015, the authorities further complicated the rules for obtaining foreign sponsor money. Many donors are finding it difficult to fund projects in Belarus. For instance, the foundation Errinnerung, Verantwortung and Zukunft has frozen the finances for the large project ‘The venue is dialogue’. The donors explained that there were too many obstacles to transferring money to Belarus, according to the organisation Vzaimoponimanije.

Belarus has signed the Convention on the Rights of Persons with Disabilities, but people with disabilities still have to rely on themselves to fight for their rights. The issue of accessibility is just one step on the way to a tolerant and convenient society.

Belarus tries to raise restive Orsha from the ashes 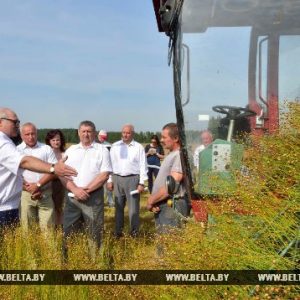 On 19 August, Aliaksandr Lukashenka visited Orsha District, a new Mecca for Belarusian officials. Over the past six months, almost all the country’s top bureaucrats have visited the town.

Orsha is getting a great deal of attention from the authorities due not only to its economic depression, but also its outsized protests against the government’s policies. This March, a thousand people protested against the social parasite tax, an impressive figure given the town’s size. To minimise dissent, the authorities are looking to boost the region’s economy with their signature mix of socialist and capitalist ideas.

In practice, however, their efforts amount to patching holes in a sinking ship. The government’s new policies might help in the short term, but are unlikely to have much effect further down the road.

To many Belarusians, Orsha is known as ‘the city with three prisons and no university’. In reality, there are only two prisons now, but the town retains its criminal reputation. Orsha is also famous as a designated transport hub and as the place where the Grand Duchy of Lithuania defeated the Muscovite army in an epic battle near the Dnieper river in 1514.

The modern history of Orsha, however, is less glorious. On 21 April, Lukashenka stated that Orsha ‘must be raised from the ruins and ashes.’ 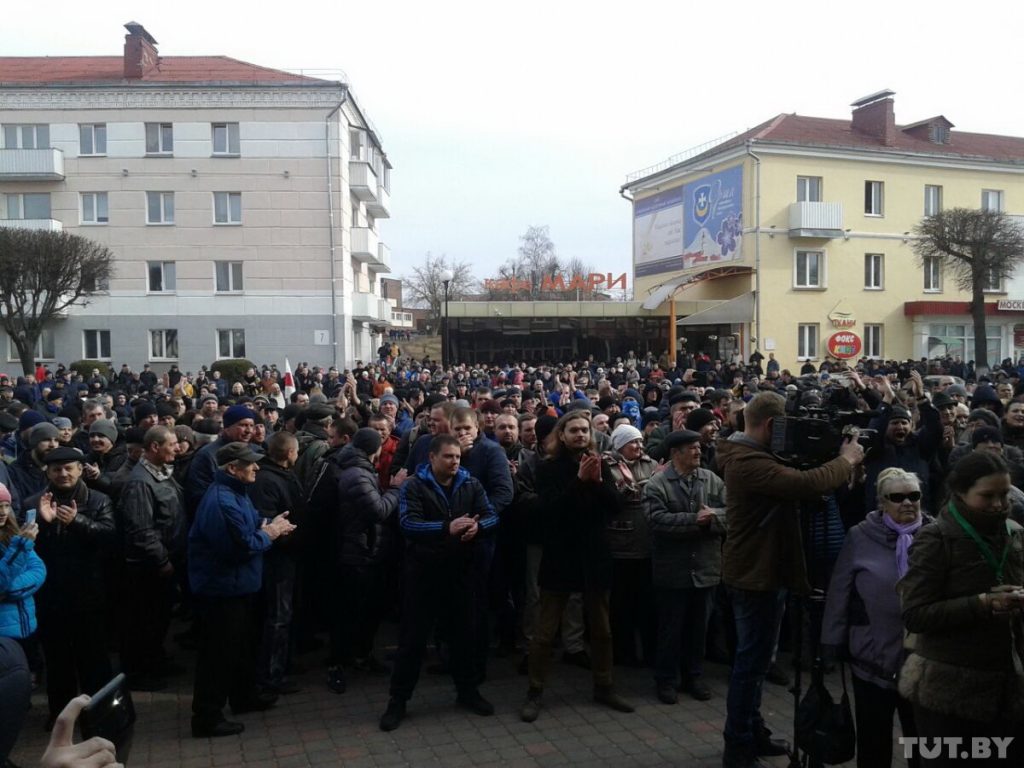 Orsha remains one of the most economically troubled towns in the east of Belarus. Moreover, residents of Orsha do not seem to fear articulating their problems: this spring, Orsha saw the largest per capita protest in Belarus. A thousand people protested against the social parasite tax in a town of only 115,000 inhabitants.

Orsha’s problems are long term. Over the past 20 years, the region has lost 30,000 inhabitants, or more than 15% of the population. Over a quarter of the region’s enterprises remain unprofitable, according to the Belarusian Statistical Committee, and many businesses have overstuffed warehouses.

According to local media reports, a salary of just $250 a month in Orsha is considered high, and in some companies people work part-time, earning as little as $70. Nevertheless, people are reluctant to quit their jobs, as the unemployment rate may be as high as 15%, according to unofficial data.

The high level of unemployment leads many people leave for Russia or search for temporary work. Every morning, several dozen people gather near the local employment centre, where ’employers’ arrive to order a one-off service, such as unloading goods. In Orsha, these groups of unemployed men even have a nickname: ‘the mafia’.

A Belarusian mix of ideas

Over the last six months, Orsha Region has become a Mecca for Belarusian officials. It has hosted visits from the Prime Minister, Deputy Prime Minister, head of the Presidential Administration, and the Minister of Economy. To demonstrate the seriousness of his intentions, Lukashenka has appointed his assistant, Alexander Pazniak, as head of the Orsha District Executive Committee. Despite the impressive number of bureaucrats involved, however, their ideas on how to fix the region remain uninspiring. 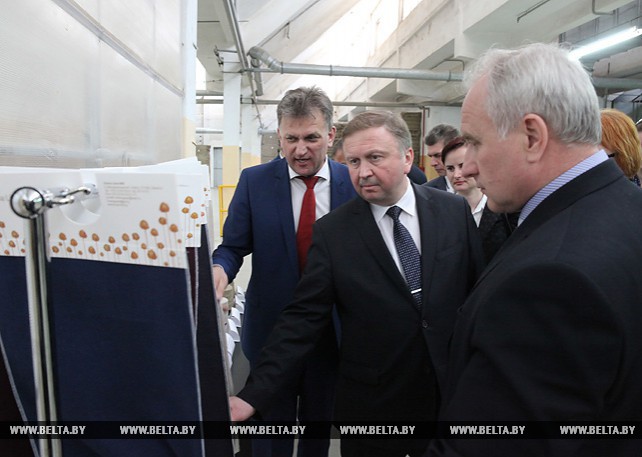 Lukashenka has proposed modernising local enterprises, providing them with financial support, and purchasing new equipment. In July, Prime Minister Andrej Kabiakou stated that the authorities had started the process of cleaning the financial accounts of the Orsha Tool Plant, the most moribund company in the region, and repairing its roof. Later, the enterprise would start buying new equipment.

Unfortunately, this modernisation effort is most likely doomed, just like previous efforts to massively modernise wood and cement plants. For example, in 2016, the profitability of the wood-processing industry was as low as 1% and boasted a $2.7bn debt. It remains unclear whether these plants will ever be able to pay off their debts. To put it more bluntly, Belarus is just wasting money on the modernisation of Belarusian state-owned enterprises.

The government would also like to create the best conditions for doing business. This is undoubtedly a noble pursuit. However, the extent to which this will benefit the region remains dubious, given that the local population lives in poverty, providing businesspeople little incentive to invest there.

In addition, the Minister of Economy is proposing to lease unused parts of state enterprises to new businesses. However, these premises are often so old that last year one company discovered nearly 2,000 unexploded ordnances left from World War II.

The authorities also intend to develop specialisation plans for the regions. In Orsha, the authorities want to expand business in two areas. Firstly, they aim to increase the importance of Orsha as a logistics hub. Secondly, the authorities are fantasising about IT sector development in the region. They do not seem to heed the fact that there is nothing close to an existing IT sector and the quality of life is far from what Belarusian IT employees have come to expect in Minsk.

It is unlikely that the Belarusian authorities can really help Orsha’s economy through this sort of wishful thinking. One can, of course, expect short-term improvements: for example, investments in fixed assets in 2017 rose almost twofold, according to official figures. But the authorities have simply pushed money into a hole in a sinking ship.

What’s more, the number of such holes keeps growing. In June, Prime Minister Andrej Kabiakou announced that the Belarusian authorities will help the Barysau, Baranavichy, and Babruisk Regions the same way they are assisting the Orsha Region now: the town is a pilot project for Belarusian regional development.

At the end of the day, it remains difficult to understand how this new approach is different from previous policies. It still boils down to investment in state enterprises with some elements of liberalisation caused by lack of money. However, this time around the scale is completely different. If previously the authorities sought to spread out public investments across all regions evenly, now only a few will obtain priority status.

A better method could be for the authorities to give more power to local councils and democratise them, thus helping them to create new development strategies and increase the efficacy of budget management. However, this will fail to have much impact until the authorities answer one key question: what is to be done with failing Soviet enterprises which demand more and more money just to stay afloat?