Judaism in Belarus dates back to the 9th century. The Jewish community has made hugely significant contributions to every stratum of life in these lands.

But by the end of World War II (the Soviet Union’s ‘Great Patriotic War’),... 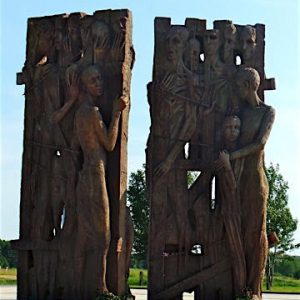 Judaism in Belarus dates back to the 9th century. The Jewish community has made hugely significant contributions to every stratum of life in these lands.

But by the end of World War II (the Soviet Union’s ‘Great Patriotic War’), the country’s Jewish community had been virtually wiped out as part of Nazi Germany’s ‘final solution’.

Yet today, small communities that refused to die are beginning to grow and re-establish connections to a heritage and identity that was all but lost. Yiddish can be heard on the streets once more. And all over the country, locals and tourists alike are at last able to visit significant sites that are being actively promoted.

Minsk: re-birth from the ghetto 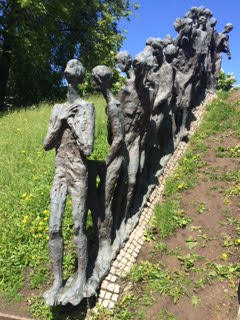 Between 1941 and 1943, the Minsk Ghetto was one of the largest in occupied Europe. More than 100,000 Jews lived within its confines in the most inhumane of circumstances. Today the Zaslaŭski Memorial marks the spot where, on a single day in March 1942, the Nazis murdered 5,000.

Around 500 of the bodies were dumped in the pit that was dug here, an act of barbarity commemorated by the bleak and doleful sculpture of a line of terrified men, women and children descending into the very pit itself. It never fails to profoundly move anyone who visits.

Frieda Wulfovna witnessed life in the ghetto at first hand. An escapee who lived to eventually tell her story, I interviewed her on a grey and snowy morning at the pit of death. Here is what she told me.

At the Holocaust Museum and Research Studio nearby, on the site of the old Jewish Quarter, Frieda and the handful of other survivors have made it their life’s work to educate and never to forget.

Located in a Jewish house over a hundred years old and opposite the site of a former cemetery, each room houses exhibits that include displays on the lives of individual families, a German military map of the city marking the ghetto boundaries, photographs of the Maly Trascianiec concentration camp on the eastern edge of the city and a memorial to the 33,000 Jews transported here by the Nazis from all over Europe.

Minsk also has a Museum of Jewish History and Culture situated on the Minsk Jewish Campus, where more than 10,000 artefacts have been collected for display.

At long last, the state appears to be acknowledging the significance of its Jewish heritage, though a cynic would say this has more to do with the exploitation of an opportunity to promote tourism abroad. Either way, plans are afoot to develop the memorial complex on the site of the former concentration camp at Maly Trostenyets, with government funds apparently committed to the project. The sculpture ‘Memory Gate’ on the site is both harrowing and deeply moving.

Brest: a race against time

In 1921 a relief programme initiated by American philanthropist Felix Warburg financed the construction of a new Brest suburb to accommodate homeless Jewish war veterans, their families and orphaned children following the privations of World War I, adjoining a Jewish cemetery established in the 1830s.

By the end of the Nazi occupation in 1944 only 19 Jews remained out of a pre-war community of around 26,000. First the Nazis then the Communists desecrated the cemetery, the gravestones either destroyed or used as hardcore in construction.

During significant building works in recent times, the remaining Warburg houses have been bulldozed one by one. Less than a handful remain. Meanwhile, the digging of foundations for a new supermarket has unearthed hundreds of gravestones.

The small Jewish community here is working tirelessly to preserve all that remains, but the clock is ticking. In Israel, urgent discussions have been held in the Knesset itself. And at present, over 1,200 headstones have been recovered from the building site and are presently stored for safe-keeping under the arches of Brest hero-fortress.

The city’s tiny but informative Holocaust Museum displays a model of the original Warburg suburb. Nearby stands the bust of Menachem Begin, the sixth prime minister of Israel, who was born in Brest in 1913.

Unexpectedly, one of the most poignant of the Jewish sites here lies within the curtilage of the Belarus cinema in the city centre, the location of the foundation stones of Brest’s original synagogue. The theatre was actually constructed around it, the shape of the original walls being clearly visible to this day. No plaque acknowledges the significance of the stones, but row upon row of them can still be inspected in the basement of the cinema. 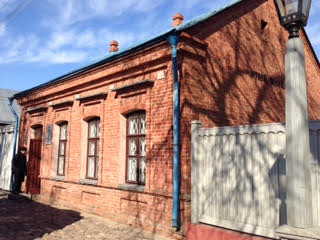 This charming and elegant city, renowned for its artistic heritage, has a special claim to fame, for ‘brilliant dreamer’ and surrealist painter Marc Chagall lived here for many years. The house of his birth (an archetypical eastern European red-brick Jewish home from the late 19th century) has been turned into a delightful museum, packed with artefacts telling the story of the artist’s life and of the community into which he was born.

Nearby stands the Chagall monument in the old market square of the Jewish quarter, while elsewhere in the city, the splendid Marc Chagall Museum and Art Centre hosts an impressive collection of 300 original works of art.

Provincial Jewish Belarus: ghosts and voices from the past

All over Belarus traces of Jewish heritage stand ready to be re-claimed, many in ordinary and forgotten locations.

While visiting the outstanding fortress in Mir, do not overlook the Jewish quarter behind the modest town square. Only part of the 19th century synagogue remains, though a new one is in the course of construction on an adjacent site. The nearby small but charming museum dedicated to the Jewish history of the town easily repays a visit.

The forests around Navagradak formed the backdrop to the heroic activities of partisans during World War II (notably the Bielski Brothers, whose exploits are well documented in film and literature). The museum in the town houses informative and moving exhibits relating to the fate of the Jewish community during the war and the engagements led by the partisans, which made a huge contribution to the Soviet war effort. 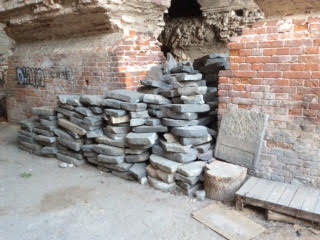 Vetka, a small and sleepy town just 22 kilometres from the country’s second city Gomel, hides dark secrets. Behind the locked gates of a farm enterprise on the edge of town stands the privately commissioned memorial to the Jewish dead of the district, 200 of whom were murdered in this very location. A mass grave was only discovered during works of excavation at the farm.

Even now, old wounds are being reopened in Vetka. Last year the local newspaper published the names of collaborators who it alleges were involved in the murders. And only recently, building works in the town uncovered the bodies of German soldiers killed in action and buried unacknowledged where they fell.

Behind a petrol station across town stands the overgrown and unkempt site of the old Jewish cemetery. Formerly the location of over a thousand graves, only a few broken stones and some rusted railings remain. School Number One has a superb museum devoted to the town’s Jewish community and its history.

To arrange tours, visits to museums or memorial sites with an English-speaking guide and to meet community members themselves, contact British charity The Together Plan, working with Belarusian NGO Dialog. Elsewhere, the objects of London-based foundation The Belarus Holocaust Memorials Project are dedicated to establishing memorials at each of the 400 known sites of Nazi massacres. 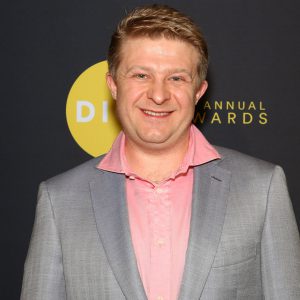 In other news: Belarusian missile site modernisation near NATO border, Lithuanian sentenced for spying for Belarus, lack of progress on human rights in Belarus, the success story of the Belarusian World of Tanks billionaire. 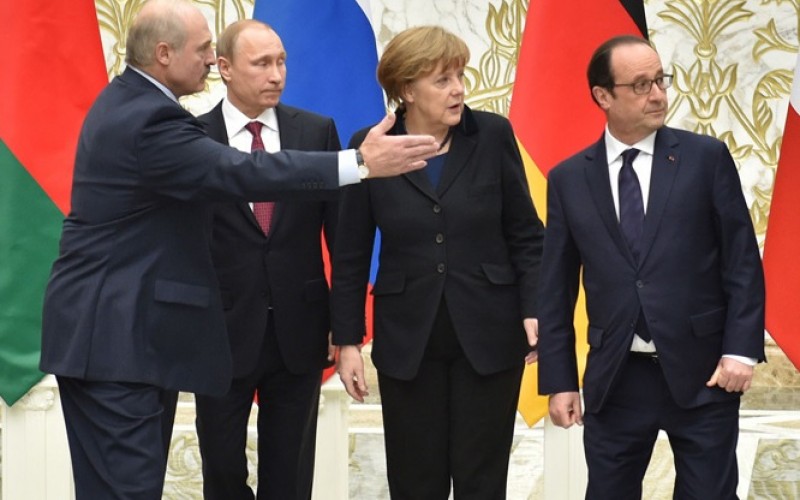 EU's controversial decision to end sanctions – The Guardian comments on the unanimous decision to end asset freezes and travel bans against 170 individuals including President Lukashenka and 3 defence companies due to “improving EU-Belarus relations.” As Rankin explains, EU ministers remain “concerned” after a recent OSCE report suggested Belarus had to improve “on democratic standards.” EU Foreign Policy Chief Federica Mogherini is quoted as saying: “When we see significant, even if limited steps, in what we feel is the right direction, we feel it is right to encourage them.”

Belarus playing "both sides" – Stratfor report suggests that, despite being “one of Russia's closest allies, Belarus is increasingly warming up to the West” with “considerable growth in Belarus' diplomatic and economic ties with the Continent and the United States” occurring recently.

The report claims Belarus is central in “standoff between Russia and the West”, citing membership of the EEU and security and military ties with Russia via the Collective Security Treaty Organisation as examples of the former and “low-level” economic ties with EU countries, talks on visa facilitation as well as its role as mediator post-Ukraine’s Euromaidan as examples of the latter.

Stratfor adds that Belarus has decided to buy Russian fighter jets instead of allowing the opening of a base in Belarus, though Russia remains Belarus' biggest economic partner.

Increased bilateral trade with Pakistan – Pakistan and Belarus agreed to enhance bilateral trade and cooperation in various sectors including agriculture, energy and health at the second session of the Pakistan-Belarus Joint Ministerial Commission.

Highlights included both sides agreeing to establish a Joint Trade Committee to identify potential products for exchange and collaborate on the training of Pakistani doctors and para-medical staff in Belarus.

PKKH also reveals that Belarus gave its full support to Pakistan’s request for a Free Trade Agreement (FTA) with the EEU and agreed to simplify visa procedures for Pakistani businessmen.

Dave reveals that Minsk, Belarus-based Masquerade has confirmed that the company “was excited to bring its virtual effects software to Facebook's 1.6b users” at a time when video customisation tools appear to be in high demand.

Sazonov explains that Wargaming Pcl has 150m global users, is valued at $1.5b and has given Kislyi a net worth of $1b, according to the Bloomberg Billionaires Index.

"The combination of creative brilliance and business acumen is what drives Wargaming’s success,” SuperData Research CEO Joost van Dreunen is quoted as saying.

Lithuanian sentenced for spying for Belarus – ABC News comments on the sentencing of former Baltic military paramedic Andrey Osurkov “to three years in jail for spying for neighboring Belarus” by “passing information about Lithuania's military” for 5 years.

The article elaborates that prosecutors claimed “the information collected was likely intended for Moscow.”

Biggers suggests this is significant due to the location approximately 80km from the Latvian border, NATO’s current strengthening of “contingency planning” for the Baltics and talks of a Belarus-Russia Joint Regional Air Defence System.

Minsk "Europe's worst city to live in" – Newsweek reveals that analytics firm Mercer, in its annual league table comparing quality of life indexes worldwide, has classified Minsk as “Europe’s worst city to live in”, the other lowest ranking cities being Kiev in 176th place and Tirana in 179th place.

Sharkov claims the factors taken into account to determine the ranking were “personal safety and health issues.” 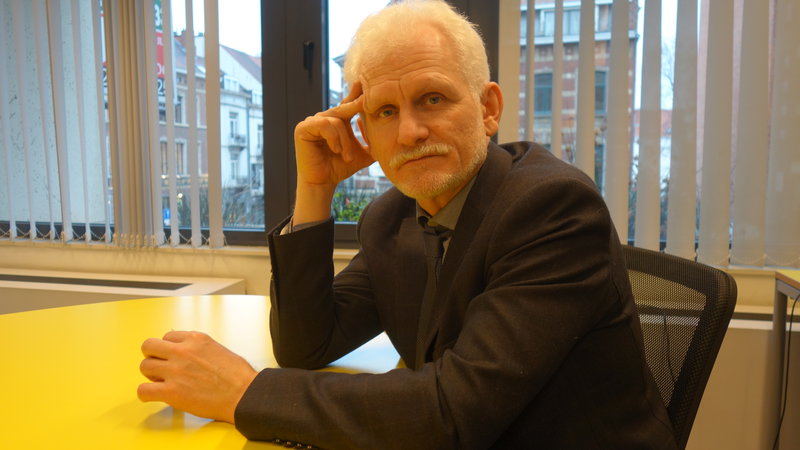 Bialiacki claims the lifting of sanctions in spite of the unchanged position of “human rights organisations” encourages feeling of “permissiveness” ahead of September parliamentary elections.

His “fear”, he claims, is “that pragmatism, economic and geopolitical considerations” could take priority, such as via proposed EU changes to the Eastern Partnership (EaP).

The article explains that she has been granted refugee status following EU officials’ urging not to extradite Hudoidodova to Tajikistan.

Belarusian authorities had detained Hudoidodova in June 2015 after Tajikistan filed an international warrant for her arrest.