Belarus-Russia relations Belarusian language Belarusian military travel to Belarus
Why Support Belarus Digest? Donate
BelarusDigest > All > Life in Belarusian Villages – A Trip into the Past

Life in Belarusian Villages – A Trip into the Past

The differences between the Belarusian capital, Minsk, and the countryside remain enormous. This insight tourists gain when coming to Belarus. During summer, tourists arrive from abroad and some of them do not only stay in Minsk but make trips... 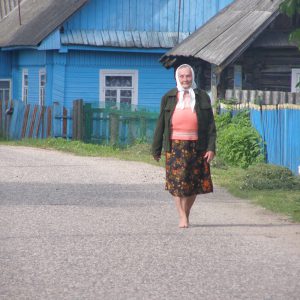 Babushka in a Belarusian village

The differences between the Belarusian capital, Minsk, and the countryside remain enormous. This insight tourists gain when coming to Belarus. During summer, tourists arrive from abroad and some of them do not only stay in Minsk but make trips around the country.

Very often, for them it feels like going to another country or century, for the Belarusian villages seem to live back in the past. Life however, is not only idyllic but also very hard, especially during the winter months.

Minsk, a metropolis of 2 Million, presents itself as a modern high-tech capital, amazing its visitors with flat screens in the metro stations, and modern buildings with glass fronts everywhere. While Minsk expands steadily – the number of inhabitants and the territory it includes grow steadily- the majority of Belarusians are living outside the capital.

According to the National Committee of Statistics, in 2011 75.1% of Belarusians live in urban areas, which include the regional centres like Brest, and Mahileu, but also smaller towns (in Belarus, a town describes a settlement with more than 6,000 inhabitants). This leaves one fourth of the population living in the countryside, which differs, in fact, from the urbanised areas: Wide fields, forests and scattered settlements characterise the rural parts of Belarus. Going to a Belarusian village today feels like going back in time. 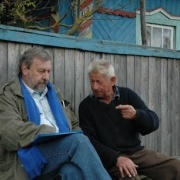 Rural exodus from 1959 till now

In Belarus, like in most other countries, urbanisation is a common phenomenon. After the World War II, the share of Belarusians living in rural settlements decreased dramatically from 80% to today’s figures as a consequence of the progressive industrialization of the country. However, more than 23,000 rural settlements have been counted in the 2009 census.

Today, the average number of population in a village amounts to 103 inhabitants- more than half as much as in 1959. As in most countries, mainly young people leave the countryside to live in the towns. One reason for rural exodus lies in the need earn their living. This is not possible in most of the villages that often lack a modern infrastructure. Some people work in nearby collective farms (former Kolkhozes) and bigger villages have a shop, but apart from this, they earn money by working their own land.

Apart from the financial aspect, life in the villages is hard. While most have electricity nowadays, only few villages dispose of running water. Large ovens in the houses that heated with wood still function as heating. While this seems idyllic for Western visitors, it means a physically hard life for villagers – even more so as very often, only old people left in the settlements, mainly widowed women.

Men very often die much earlier than their wives, primarily because of alcohol abuse (alcohol is very cheap in Belarus). The population of some villages therefore consists mainly of old women. Most of them remain completely alone during the week, with their children and grandchildren living in the towns and cities.

During the summer, the population of the villages rises. First of all, parents send their children to live with their grandparents in the villages during the long holidays- they last almost three months in Belarus. Moreover, many villagers have bought village houses during the last years. A good house with several acres of land could sometimes be purchased for as little as $500.

As demand has risen, people now have to pay around $5,000. Still, many Minsk inhabitants are glad to escape from city life and spend their free time in a village. This goes back to the fact that for many of them, the village reminds them of their childhood as most of the people living in Minsk do so in the second or third generation. Apart from this, economic instability and inflation make growing fruits and vegetables a necessity for many people.

While the villages are revived in this way during the summer, whole weeks may pass in winter where the villagers do not see anybody from the outside. In some of the villages, electricity does not work and the snow clearing vehicles rarely manage to get through to every village. This proves especially problematic in such cases where there is no village shop. 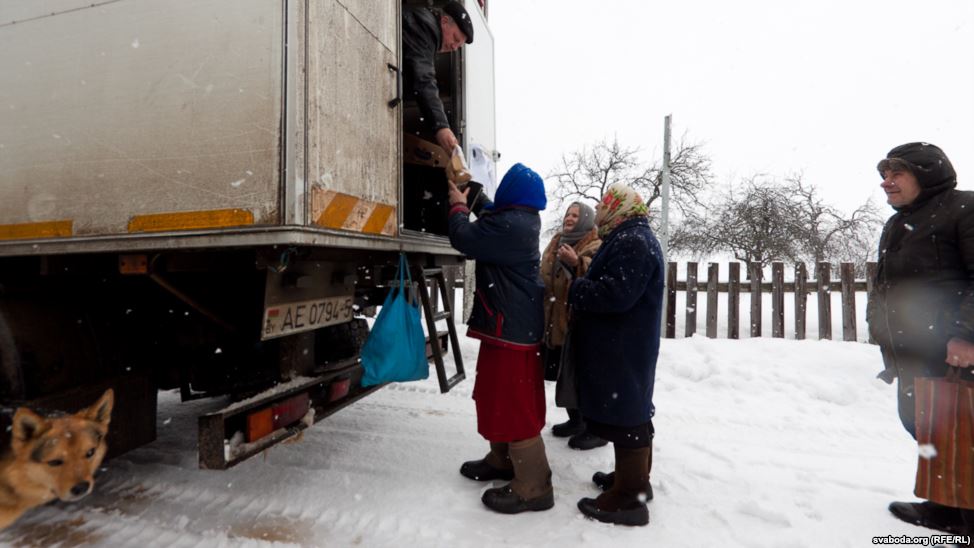 In those villages, the population relies on “Autalauka”, a shop on wheels that gets to the villages. The driver of such a shop serves around 100 villages a week. His salary during summer amounts to $500 per months.

However, he has to live on what he earns in the summer during the whole year, as he often cannot work during winter because of the snow on the roads. For villagers this means that they do not have an opportunity to buy bread, flour, milk or other products for weeks in a row. Moreover, an ambulance or a doctor can hardly reach frail and elderly during the winter.

To fully understand how Belarus functions, one should leave Minsk and take a trip to one of the villages. Only after having spent a weekend there, analysts and policy makers will understand why Belarus still has the current political system and why it proves so difficult for the opposition to reach the people.

Life in those small villages seems apolitical, what happens in Minsk does not play a direct role for the villagers – only to the extent that their pensions and food prices rise or fall. Hardly any difference can be spotted in those villages between now and thirty years ago, back in the Soviet Union. Most villagers have seen so much in their lives and they remain so cut off from buzzing Minsk that at any possible demonstrations,one can hardly imagine them supporting opposition politicians or even taking part in a revolution.

In an ideal state, the authorities would redistribute the expenses to ensure better medical services in the villages instead of improving the outward appearance of the capital. Moreover, the state urgently needs to create incentives for families to move back to the villages by subsiding private housing and founding schools.

Zaitsev in Cosmos: Ex-Head of the KGB Got a New Appointment 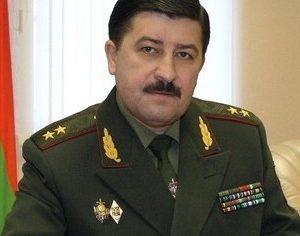 Vadim Zaitsev, the person who happened to head the Belarusian KGB in the country's most critical time, as well as the Committee for State Security – during the December 2010 presidential election as well as two years before and two years after – got a new appointment. Since 2012, when Zaitsev was dismissed, everybody wondered where his managerial genius would manifest itself.

Was he assigned to the president's personnel pool? Will he suddenly emerge as an ambassador, and if yes, how remote from Minsk will be the country of his assignment? And finally, a piece of news: chekist Zaitsev has been appointed managing director of Cosmos TV, the company which has equipment in houses of many of us.

News agencies are terse about it. It is reported that Vadim Zaitsev has been appointed to head the company "at the suggestion of the Belarusian partner", and that a participatory share of Belarus in the charter of Cosmos TV Limited stands at 50%, with the share of the Russian company Akado standing, respectively, at 50%.

The online community reacted promptly to the new milestone in the biography of the former chekist: a guide "How to cancel your Cosmos TV subscription" is circulating online where users are invited to fill in an application form and to state "appointment of Vadzim Zaitsev as the head of the company" in the field "reason for cancellation".

However, the appointment of the hero of Independence Square 2010 to head a semi-private company prompts quite a different reaction from those people who are prone to thoughtfulness and analysis. In the first place, this is a desire to pinpoint those "escape lines" from the civil service which every Belarusian top official has. Lately, a certain style has started to take shape in these situations. Shame on those who say that we have no tradition whatsoever of employment assistance to civil servants after the state stops needing them at their posts for some reason. The tradition is emerging.

The trend of departure from the big nomenklatura to big business was set already by former Prime Minister Uladzimir Jarmoshyn (dismissed in 2001). In 2002, he became head of the representative office of MTS in Belarus (now, according to Wikipedia, he is employed by Vneshekonomstroy).

Again, according to Wikipedia, he heads Direct Management Ltd since 2009 (development, Moscow). Former head of the Belarusian Railways Viktar Rakhmanko (dismissed in 2001 after having been accused of embezzlement) chose the path of Jeryn and was employed by Gazprom.

Former assistant to the president Siarhiej Posakhau, according to UDF, got employment and worked until recently at LenSpetsSMU in Saint Petersburg. Russia was also chosen by former head of the presidential Property Management Department Ivan Tsitsiankou (dismissed in 1999) immediately after his dismissal (first, he worked in logistics at Itera and then opened his own business).

Aliaksandr Zimouski, former head of the Belarusian Television and Radio Company, who is banned from entering Europe, turned out in Russia. He says that he works as a "media consultant".

Even a sketchy analysis allows seeing that Russia is a higher demand destination point than Belarus for former Belarusian "chiefs". Possibly, because in Russia (unlike in Belarus) there is plenty of capital which, by their sheer volume, honoraria and bonuses, meets the career ambitions of people who were at the very top of the Belarusian power pyramid. At the same time, there is a feeling that Belarus is now afraid to let go officials of the rank of the KGB boss.

In this regard, a lot has changed here since 2004 (Jeryn's dismissal and his subsequent departure).

After several bitter scuffles in the Union State, Russia is no longer perceived as an unequivocally friendly country which shares its state secrets with Belarus and thus is quite a secure one for the trouble-free retirement for former powerful strongmen. The nervousness provoked in Moscow by news of Uladzimir Navumau's emergence in Moscow (and this is a person who knows quite a lot) is the best proof to this.

However, Vadim Zaitsev's appointment to Cosmos TV can be regarded as a continuation of his service to the Motherland – this time, in another segment and in another capacity. As it is known, only now a large-scale wave of fight against satellite dishes has been launched in Belarus.

Residents of tower-blocks say that their housing maintenance services gave them time till the end of July and then they threaten to sue them. The court's decision to dismantle the "illegally installed equipment" will be binding.

Appointment of Vadim Zaitsev, a person clearly loyal to the state, to the management of one of the major providers of cable and over-the-air television can be seen as a continuation of the tactics of instilling order with satellite TV. Ultimately, the guide "How to Cancel your Cosmos TV subscription" will be absolutely useless if, after getting rid of Cosmos TV, the audience will have to spend time with the "alternative" in the form of three channels of the state-run Belarusian television.

This article originally appeared on 17 June 2013 in Belgazeta in Russian.