The Weapons of Mass Information

In his Independence Day speech today, Alyaksandr Lukashenka described "information intervention" as the main danger to independence of Belarus. According to him, external enemies of the country deploy the weapons of mass information to manipulate public opinion in Belarus.... 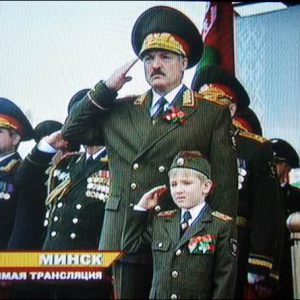 Lukashenka and son at the military parade in Minsk

At the military parade today, the authorities should have also demonstrated the modern tools which help them remain independent.  At least three important things were missing – giant police trucks designed to transport detained protestors, plain-clothed security service agents who grab people in the streets and Internet warfare specialists, who block web sites and combat protesters on social networks. But these units were busy today fighting for independence of Belarus rulers from their people.

The police trucks were patiently waiting for their passengers who were delivered to them in hundreds by plain clothed security agents during the day. Men in black promptly detained those who looked suspicious or tried to clap. The state IT specialists were busy with denial of service attacks on independent internet media. They  also succeeded in blocking all large Belarus protest groups on the Russian social networking service Vkontakte.

Despite their rhetoric and military parades, Belarusian authorities understand that controlling the spread of information is the key to their political survival.  In today's Europe, using military force to unseat a ruler of another country is very unlikely. Fortunately, these times are long gone.  Even Russia stopped short of using its army to unseat Georgia's president Saakashvili in 2008. The main threat for autocratic rulers comes from their own people who need to be kept either loyal or at least fearful.  Mass media is the main instrument to achieve that.

The protests organized by means of Internet only engaged a limited number of people. Most in Belarus gather their information from television and radio. Nothing can beat their hypnotic effect.  State television and state radio are available in virtually every Belarusian flat. As a result, people learn political news from these easily available sources.  They may also prefer not to watch the news at all or watch Russian channels, which are  available in Belarusians a part of the standard package.

Russia often criticizes and even offends Belarus authorities. However, the official Minsk learned how to filter such broadcasts. This filtering is not always effective, which undermines the state's nearly complete TV and radio monopoly.  Russian media have their own agenda. For instance, they like to hint that if Belarus replaces its national currency with the Russian ruble, the economic problems of Belarusians will soon be over. They do not mention that it will also be the end of the country's independence too. Many analysts agree that Russia wants to weaken Lukashenka, but not interested to unseat him.

The only alternative television channel for Belarusians is Poland-based Belsat. This satellite channel is primarily financed by the Polish Government, is structurally a part of the Polish public television but employs many Belarusian journalists. The channel's reach in Belarus is limited. Because of the lack of finance, they can only prepare less than an hour of daily Belarusian news coverage and cannot be watched without a satellite dish.  Because of the economic crises, the satellite dish became a luxury unaffordable to many in Belarus. Belsat still does not have live internet broadcast. An effective improvement of its reach could be trans-border broadcasts to cover at least large border towns such as Brest and Hrodna. However, this has not yet been done.

The role of Internet  in Belarus is steadily increasing, but it is far from being the dominant source of information. According to a May survey of the Independent Institute for Sociological and Political Studies, 33% of the adult population in Belarus received information from the Internet and only 2.2% – from social networks. This 33% include those who never read any political news on Internet as well as  strong supporters of the authorities. And the 2.2% using the social networks, even assuming if they all want to protest, cannot do much against the army of security agents. The state security services block social networks and fill Twitter and Facebook feeds with false and misleading information to disorient and intimidate protesters.

As a result, the authorities are winning the information battle and Internet does little to dilute the effect of the state propaganda machine. As long as state propaganda succeeds in making Belarusians either loyal or fearful – it will take a long time before real changes will take place. However, if the economic decline continues, even the most aggressive brainwashing and sophisticated security services may fail. 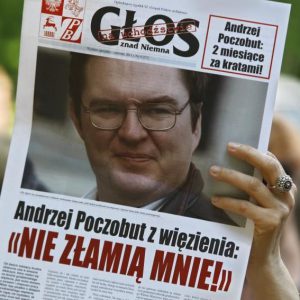 Over the last week Belarus authorities strengthened pressure on journalists and generally tried to limit the spread of uncensored information. Although the number of protesters remains relatively small, they are surprisingly persistent and attract more people in Minsk and elsewhere. Authorities began to rely more on plain-clothed agents for arrests and intimidation.

Independent public opinion polls show that Belarusians are increasingly unhappy about the deterriorating economic situation and tend to blame authorities for the crisis. On the positive side, the Second Festival of Belarusian-language advertising and communication AD.NAK! took place in Minsk.

A sentence to Andrzej Poczobut will be announced on 5 July. The trial in the criminal case against the journalist of Gazeta Wyborcza Andrey Poczobut is going on in Hrodna. Poczobut is charged under two articles of the Criminal Code: 368 ("insulting the President") and 367 (slander against the president").The Prosecutorasks for Poczobut 3 years of the colony.

Penalty for posting in VKontakte. On 27 June a young Gomel democratic activists Peter Philon was arrested in his apartment after he posted in social network VKontakte an invitation to meet with his friends on Monday. The court fined Philon on Br105 thsd ($20) for an "attempt to organize the unsanctioned mass event".

“Revolution through a social network”. On 29 June the regular action "Revolution through a social network" was held. The idea is to gather democratically oriented people weekly at a certain time (Wednesday, 7 pm) on the main square of the cities, without flags and other symbols. Throughout Belarus police undertook enhanced measures to prevent the action: almost all the central squares of major cities were occupied by official events, fenced with turnstiles and limited to access.

According to observers due to heavy rain and counter security forces only 1.5 thousand people participated in the action – less than a week ago. In Hrodna, Brest and Homel, compared with the previous weeks, much more participants gathered: around 1500, 600 and 800 people respectively. Because the the authorities blocked central squares of these cities people marched through the main streets. The distinctive feature of June 29 was that people were arrested by men in plain (sporting) clothing without distinctive insignia. Belarusian photographer Anton Motolko published a photo essay on this.

In various cities across the country 269 people were detained, including 13 journalists. Moreover, three journalists were beaten (including two foreign reporters), at least three pieces of professional equipment were damaged. 130 people were drawn up for disorderly conduct, disobeying to police, and participation in an unsanctioned action. According to data on July 01, participants of the "silent action" were fines ranging from Br105 thsd to Br875 thsd (total Br12.5 million of fines, or $2500) and administrative arrests from 5 to 15 days (total 145 days in jail). Others trials have been moved to July 6 and 7.

A new public opinion poll. In June 2011 the Independent Institute for Sociological and Political Studies (IISEPS) conducted a survey on the most important issues of Belarusians’ life. Deterioration of the "economic well-being" of Belarusians can be characterized as a true landslide. Thus, the number of respondents who said their financial situation over the past three months has worsened, increased from 26.9% to 73.4%. 81.5% believe that "the Belarusian economy is in crisis", and lay the blame primarily on the president (44.5%) and government (36.7%), but not to the world crisis (27%) or speculators (16.6%). The number of those who are ready to vote for Lukashenka again in the presidential election for the first time since March 2003 has fallen below 30% and amounted to 29.3% (December 2010 – 53%, March 2011 – 42.9%).

AD.NAK! Advertising Festival. On 23 June the ceremony of awarding of the Second Festival of Belarusian-language advertising and communication More – AD.NAK! was held in Minsk. The Festival purpose is to pay attention to the advertising and other marketing communications tools, made in the Belarusian language. The idea of the Festival belongs to the campaign "Budzma!" In the category "Civil important projects in the arts and culture" the Grand Prix went to the animated movie "Budzma Belarusians!", in the “Media or Media Projects”- to 34 Multimedia Magazine, in the "Social Advertising"- to the BAJ animation "Specialty is journalism".

Press Club of Belarus in Warsaw was launched. The Club’s purpose is to help the Belarusian journalists and other media in their work for the sake of democratic Belarus and media freedom. Among the Club’s founders there are only Belarusians – prominent journalists, editors and publishers: Julia Slutskaya, Dmitry Novikov, Alexander Starikevich, Ales Lipai, Alexander Ulitenok, Alexey Dzikavitski, Piotr Martsev, Viktor Martinovich.