Last Sunday, a thousand Belarusians carrying national flags and wooden crosses marched from central Minsk to the Kurapaty forest. Nearly 100,000 people were shot dead during the Stalin era in Kurapaty. On just one day 74 years ago, more... 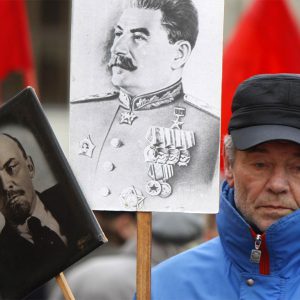 Last Sunday, a thousand Belarusians carrying national flags and wooden crosses marched from central Minsk to the Kurapaty forest. Nearly 100,000 people were shot dead during the Stalin era in Kurapaty. On just one day 74 years ago, more than a hundred representatives of the intellectual elite of Soviet Belarus were also shot dead in the cellars of the Minsk KGB (then known as NKVD) internal prison "Amerikanka”.

The archive of the President of the Russian Federation still keeps the list with the names of the 103 residents of Soviet Belarus who were sentenced to death by Joseph Stalin on 15 September 1937 and shot on the night of 29 October 1937. According to some historians, this was the way Stalin's assassins celebrated the day of Lenin's Komsomol – The Communist Union of Youth's anniversary. The victims were Belarusian writers (as many as 22 people), government officials, labor leaders, prominent doctors, teachers, priests, military officers, students and others.

The Tunnel of Death

Leanid Marakou, who is a researcher of Stalin's repressions in Belarus and an author of the multivolume encyclopedia with biographies of thousands of persecuted intellectuals, has documentary evidence that Soviet authorities repressed more than 600 public and cultural figures of Soviet Belarus in the three autumn months of 1937. In the period from August 1937 to December 1938, known as the "bloody tunnel of death", over 10,000 Belarusian people were killed.

Marakou estimates that the NKVD killed or exiled to concentration camps up to 90 percent of Belarusian writers (over 500), 100 percent of priests (around 3000), one in three teachers (around 4,000), around five thousand state officials (engineers, economists, and almost all directors of factories then in Belarus). According to Marakou, "the secret NKVD institutions worked for Stalin in the 1930s. They had already foreseen the huge potential in the geographic location of Belarus by that time".

He points out that Bolshevik authorities in Moscow were primarily concerned about the possible independence of Belarus and its separation from the Soviet Union. To avoid this, they destroyed the nation’s intellectual elite and gene pool that had been accumulated over the centuries. Marakou explains that "the characteristic fear, indifference and passivity in Belarusian people today is a result of that genocide."

Once a successful businessman, Marakou left his lucrative job to start researching Stalin’s terror 10 years ago when he learned that his uncle – talented Belarusian poet Valery Marakou – died on that terrible night on October 30, 1937.

According to the data of another Soviet totalitarianism researcher Ihar Kuznyatsou, between 600,000 and 1,500,000 residents of Soviet Belarus became the victims of Stalin’s repressions and terror: almost every tenth person, every third or fourth family. By official figures, 152,399 criminal cases and 235,552 people were revisited after Stalin's death. 175,914 of the repressed Belarusians were rehabilitated, but 59,638 of the victims were denied rehabilitation.

However, it is impossible to count the exact number of repressed people in Soviet Belarus. In today's Belarus, KGB archives are still closed to researchers.

Four years ago, prominent scholars and former political prisoners in Minsk organized a public tribunal to deal with the crimes of Stalinism in Belarus. They stated that it was not impossible for the country to become a rule-of-law state without having a fair trial over the communist crimes and criminals. Belarus has commemorated 20 years of its sovereignty this year, but the state under 17-years of Alexander Lukashenka's rule has not even tried to revisit the Soviet past. We witness attempts to rehabilitate Stalin and to level crimes of the Soviet regime in the country that has suffered so much from Stalinism.

New high school history textbooks downplay the scale of crimes of the communists. They stress the positive role of Stalin in the historical process. Official propaganda has the same attitude. For instance, in the biographical reference book "The Generals of the State Security of Belarus" (Minsk, 2008), compiled by KGB Major-General Ivan Yurkin, it is claimed that the KGB simply maintained "social order" and "implemented the leading party guidance”. The growth in repressions was explained by the battle within the intelligentsia for whom it was a “quick and effective way to get rid of competitors."

In the summer of 2005, the historical and cultural complex "Stalin Line" was opened not far from Zaslawye town near Minsk. On official holidays visitors can observe spectacular combat reconstructions between Soviet and Nazi soldiers. Official ceremonies usually take place next to the monument of Joseph Stalin which was erected there several years ago. Another bloody dictator’s monument was installed in 2000 by the Belarusian authorities in the town of Svislach in Hrodna voblast. It happened almost four decades after a huge Stalin monument was removed from Minsk Central Square as a part of the Khrushchev Thaw.

In 2006, a three-meter monument to the founder of the KGB, "the initiator of mass terror, provocation, and the institution of hostages" Felix Dzerzhinsky was raised on the territory of the Minsk Military Academy. The initiator of that memorial was the Chairman of the State Border Guard Service Alexander Paulovski, for whom Dzerzhinsky was a "positive figure in our history." Another monument to Dzerzhinsky has been standing in front of the KGB headquarter in the center of Minsk since the Soviet era.

There are more similar stories to tell. Belarus remains the only post-Soviet republic which has kept the ominous name of the KGB without any changes and celebrates officially the day of the October Bolshevik Revolution.

In this context, all the events that have taken place after the brutal crackdown of opposition protests on the day of presidential elections on 19 December 2010 in Minsk seem very symptomatic. Lukashenka’s special riot forces arrested dozens of opposition figures, journalists and civic activists, including five presidential candidates. They were thrown into the same "Amerikanka” prison – nowadays the Minsk KGB detention center.

If someone thinks that Stalinism is impossible in the 21st century right at the center of Europe, the Belarusian authorities are trying to prove the opposite. The recent amendments to the Belarusian law related to financing of parties and NGOs from abroad, holding mass rallies and expanding powers of the KGB that were introduced in October, are another step in this direction.

Towards an Effective EU Lobby Inside the Belarusian Regime 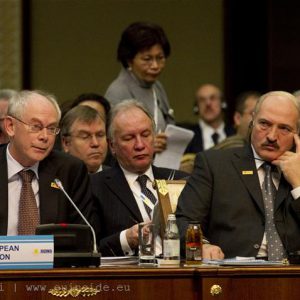 A. Lukashenka and H. Van Rompuy

Last week Belarusian President Alexander Lukashenka visited Tajikistan where he claimed that Belarus should not be blamed for the current difficulties in Belarus-EU and Belarus-USA relations and that his country 'sincerely tries to establish a constructive interaction'. This is yet another statement which demonstrates that Alexander Lukashenka is interested in Belarus-EU dialogue and hopes to restore the status quo of 18 December 2010.  But he is not ready to make political concessions.

This time the European Union is showing remarkable determination to improve bilateral relations only after Belarus releases and rehabilitates all political prisoners. However, does this firm determination help the European Union to achieve its aims in Belarus? So far the EU policy of isolation towards Belarus has failed to achieve its goals. It should be replaced by a new engagement policy based on mutual interests, development of social ties and the creation of lobby groups within the Belarusian regime.

After the establishment of the authoritarian regime in Belarus, between 1995 and 2008 the European Union adhered to a policy of isolation. This was subsequently replaced by an engagement policy following the war in South Ossetia and the creation of the Eastern Partnership. The brutal suppression of the 19 December 2010 opposition demonstration that took place in Minsk after the presidential election forced the European Union to return to the policy of sanctions.

If one is to judge, none of the EU strategic policies towards Belarus produced the results that had been expected. One of the main factors that could have caused the failure of these policies was the lack of information about the real mechanisms of the Belarusian regime. Most Western decision-makers know little about the regime's functioning, decision-making procedures, interest groups and the hidden discussions that take place among them about the future of the country.

Why does the EU needs its own lobby inside the Belarusian regime?

The Belarusian state apparatus functions as a closed corporation to which access, as a rule, is given only to those who are loyal to the ruling elite. If European politicians want their information to be heard by the Belarusian ruler without distortions, the EU should have its own interest groups within the Belarusian regime. In any personalistic regime, “access to the ruling body” is of crucial importance, because only a limited amount of information is available to the leader. It is particularly important in a context where there is not much else left for him to make decisions in the conditions of distorted and insufficient information.

Social ties between the Belarusian high-ranking officials and their counterparts in the West are very weak. This is why the exchange of experience and information often becomes impossible. However, the exchange of information on a consistent basis could prevent serious crises in relations such as the one which started on 19 December 2010. It is worth noting that one of the first actions taken by USA and USSR leaders after the Cuban Missile Crisis was the establishment of a dedicated telephone line between Khruschev and Kennedy for direct talks in case of emergency.

When the EU does not provide easily available opportunities for youth education and does not want to liberalise the visa regime, it loses future advocates of the European policy in Belarus. Today a significant proportion of young Belarusian state officials are graduates not of European but of Russian universities such as MGIMO, Moscow State University, Russian military academies and FSB Security Service Academy.

The education of the Chief of the Belarusian Presidential Administration Vladimir Makey in the Diplomatic Academy of the Austrian MFA may seem like a minor episode in his biography. However Makey is regarded as the most active adherent to the soft-line policy of the Belarusian regime towards the West in 2008-2010.

Belarus in the regional context

In this context the German-Belarusian Society’s decision to cancel the 2011 Minsk Forum for the first time in 13 years raises doubts about its efficiency. Rainer Lindner, the Society’s Chairman, declared that the reason for the cancellation was the political situation in Belarus after the presidential elections. However, in November of 2009 the Minsk Forum made possible a dialogue between Vladimir Makey and Alexander Milinkevich, one of the opposition leaders. By this cancellation, organisers deprived Belarus of an important dialogue platform for further democratisation.

Official Minsk does not aspire to join the European Union. In contrast to Ukraine it does not hope to get such 'carrots' as signing the Association Agreement and creating a 'deep and comprehensive free trade area' with the EU in the foreseeable future. Moreover, regional experience shows that even with the full opportunity to participate in the European Neighbourhood Policy and the Eastern Partnership, Georgia, Moldova, Ukraine, Azerbaijan and Armenia did not achieve any serious progress in terms of democracy and rule of law. On the contrary, Georgian police suppressed some large opposition manifestations and Ukraine's former Prime Minister Yulia Timoshenko, the main political opponent of the incumbent president Victor Yanukovich, was sentenced to seven years in prison.

Therefore, when the EU pursues its isolation policy, it reduces its opportunities to influence the decision-making process in Belarus and to promote political changes in this country. The loyalty of Belarus to European recommendations and policies is very low and to increase it the European Union should elaborate and pursue a new engagement policy, including the establishment of contacts with Belarusian officials and businessmen.