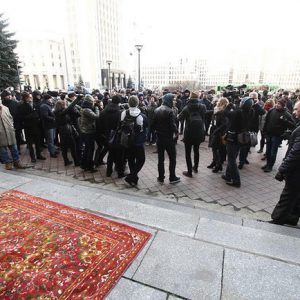 Young Belarusians against corruption – the platform Talaka.by together with UNDP launched a youth competition of short video scenarios on combating corruption.

Conference on women participation in politics. On 15 November the Women's Network Mara/Dream and the BPF Women's Commission organised a conference titled as Women in Political Life in Belarus. The conference was aimed at discussing the role of women in the Belarusian politics and announcing Mara's plans to promote participation of women in the parliamentary election campaign in 2016. The conference was attended by Olga Abramova, a former MP, Nina Stuzhinskaya, Tatiana Karatkevich, candidate for the presidency in 2015, etc.

Prospects of local border traffic discussed in Grodno. On 20 November Grodno hosted a round table "Local Border Traffic On the Eastern Borders of the European Union: Case Belarus" organized by the Vecherni Grodno newspaper and the Belarusian Institute for Strategic Studies (BISS) in partnership with ODB Brussels and the Visa Facilitation and Development Centre. The experts shared their views on prospects of local border traffic development between Belarus, Lithuania, Latvia and Poland.

Forum of Entrepreneurs scheduled for 14 December. Head of Perspectiva NGO, Anatoly Shumchanka personally invited Deputy Minister of Economy to attend the event. The Forum will be held in a critical situation for individual entrepreneurs – from 1 January 2016, entrepreneurs selling uncertified imported goods will be sentenced to administrative liability.

Break the Chain of Corruption Competition of scenarios. The platform Talaka.by together with UNDP launched a youth competition of short video scenarios on combating corruption. Young people who are under 35 and desire to change the world around for the better are invited to participate. The winner will be invited to participate in the filming of his/her movie scenario, and receive a prize of 5 million BYR (about $270). Deadline is 6 December.

Students organized ‘love and solidarity march’ in Minsk. On 2 December Belarusian students gathered at ‘a love and solidarity march’ in Minsk. The idea has been reported in social networks. "This is our chance to show the university administration and the Ministry of Education that we demand real reforms in the higher education instead of trying to conceal their failure behind ‘fines and extortion’.

The UN in Belarus has launched a 28-day campaign Inclusive Belarus: Sustainable Development Goals for All. The campaign (hashtag #InclusiveBelarus) aims to raise awareness about fight against fear and stigma, and give hope and opportunity to those who feel excluded from the world they live in every day. For instance, on 4 December the National Library of Belarus will be illuminated in orange as a sign of the fight against violence against women and girls.

The petition to make Minsk city budget open. Kosht Urada project, SYMPA and BIPART offer to Minsk City Executive Committee and the Ministry of Finance to make available quarterly or monthly budget reports of Minsk since 1 January 2016. This information would allow Minsk residents to understand what are the main sources of budget and how funds are spent. All supporters are invited to sign a relevant online petition.

The 6th Social Weekend's finale took place on 21 November in Minsk, and was attended by 70-80 people. Twelve out of 15 finalists got local support for their ideas for a total amount of $20,000. The Grand Prix went to purchasing sport wheelchairs for children, among other winners – education for autistic children, Belarusian language online game, etc. The contest of social projects is organised by MaeSens platform together with the Office for European Expertise and Communications (OEEC).

TEDx in Minsk. On 21 November Minsk hosted a conference of TEDx format on the topic Changes, that Change Us. Nine speakers spoke about their work, motivation, success – how to implement wishes into reality. Kyky.org journal recorded the most interesting quotes of TEDxNiamiha; one of them is in the title of the article – "People who have a passionate dream, live 7-10 years longer than the others."

Another death sentence handed down in Grodno. On 20 November the Grodno Regional Court has sentenced to death a resident of Lida district Ivan Kulesh. A 28-year-old man was accused of committing three murders, theft and robbery. He is at least the second person to receive the death sentence in 2015. The European Union urges Belarus, the only country in Europe still applying capital punishment, to join a global moratorium on the death penalty as a first step towards its abolition.

12 charged over protest staged to mark 1996 referendum anniversary. Twelve persons, including three journalists and two observers, have been charged with illegal picketing as a result of a demonstration held on 24 November in central Minsk to mark the 19th anniversary of the 1996 referendum, that dramatically increased president Lukashenka’s power. The protest was announced by former political prisoner Mikalai Statkevich and gathered around one hundred people.

Minsk activists offer the mayor to create a public council. The proposal to create a public council on urban planning at the Minsk city municipality was emerged during a public discussion of the general plan of Minsk, which took place in October-November. In early November, active citizens and representatives of initiative groups handed over to the Minsk authorities 60 pages of comments and suggestions to the general plan. 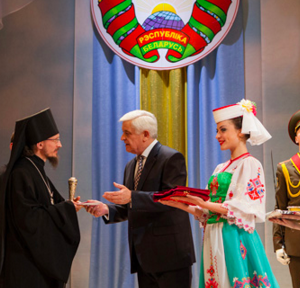 Due to such low levels of religious fervour among the general public, state support has become key to helping the Orthodox Church maintain its dominance in Belarus’s society.

Prosecuted during the Communist period along with other religious denominations, the Orthodox Church has become one of the important pillars of the state ideology in modern day Belarus. Other denominations exert no comparable influence in the country. In 2004, the Orthodox Church signed an agreement with the government, allowing it to obtain exclusive rights of influence in education, health care, and crime prevention. 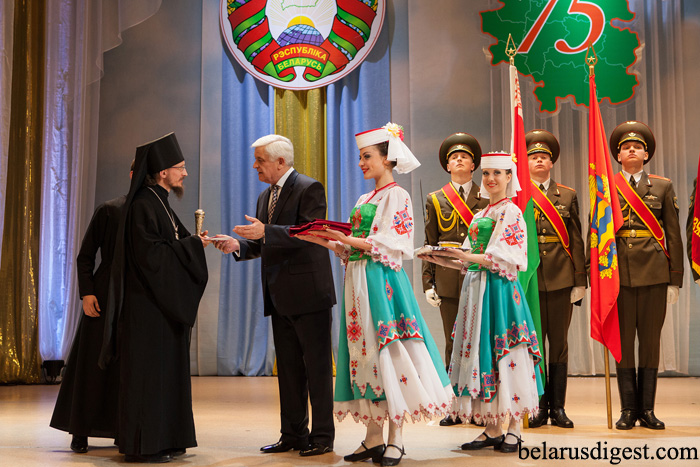 A representative of the Orthodox Church is receiving an Honorary Citizenship award from the state at the 75th anniversary of the Minsk region in January 2013. 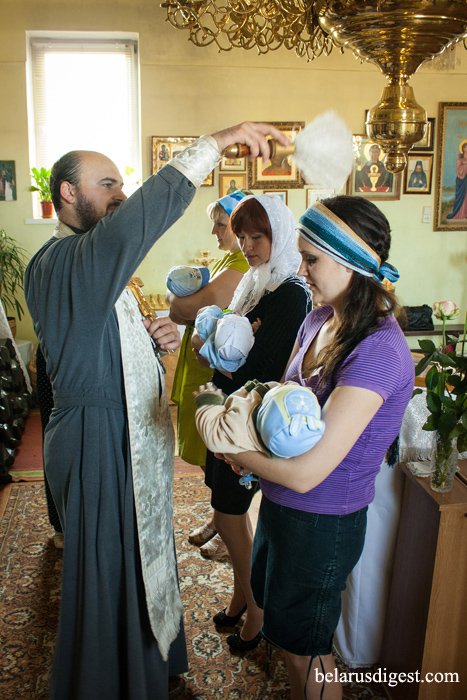 Infant baptism at an Orthodox Church in Maladzechna. 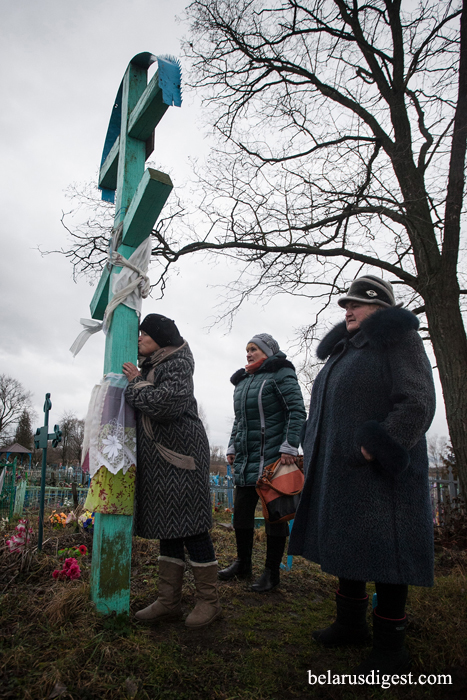 A woman is kissing the cross at a cemetery in Turau, Homel region. 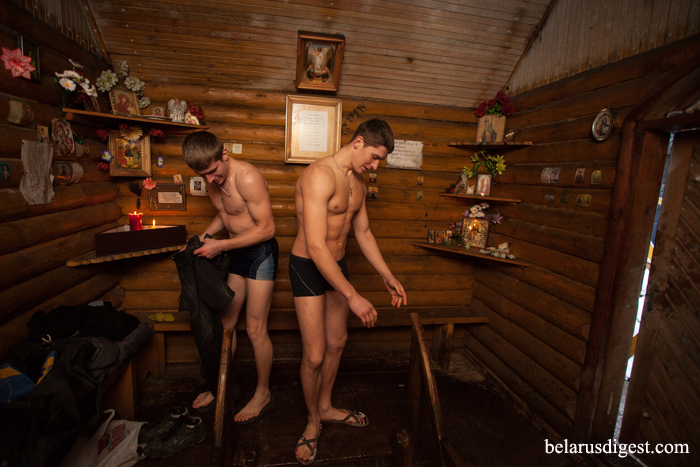 Commemoration of the baptism of Jesus in the Jordan River (Epiphany) in the woods next to the village of Damanava, Vilejka district. The men are about to plunge into the holy spring. 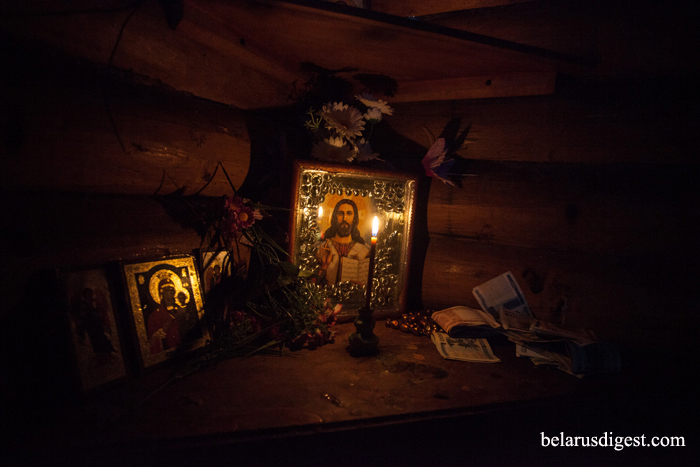 Traditional Orthodox icons are decorated for Epiphany. In the absence of a donation box, believers put monetary contributions on the shelf with the icons. 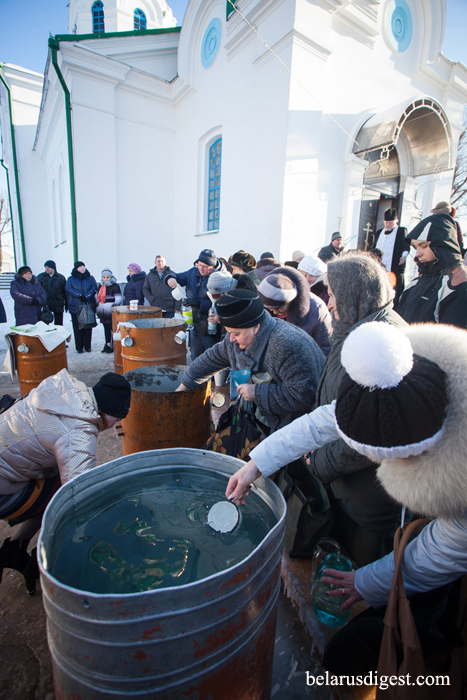 The Belarusian Orthodox Church follows the Julian calendar and celebrates Epiphany on 19 January. 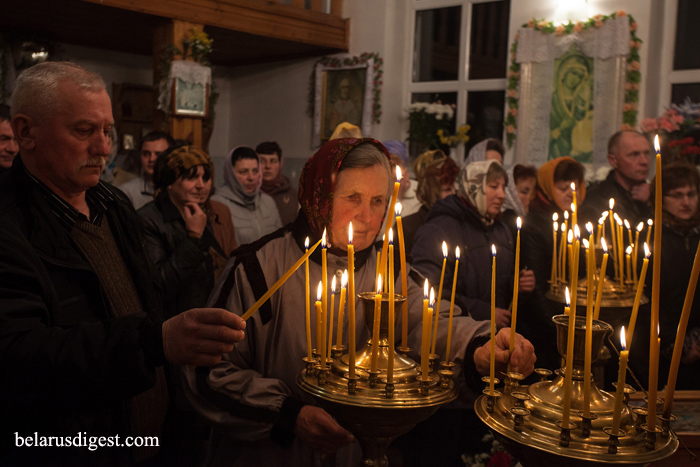 Parishioners are lighting candles in preparation for the Easter celebration in Zaskavichy, Minsk region. 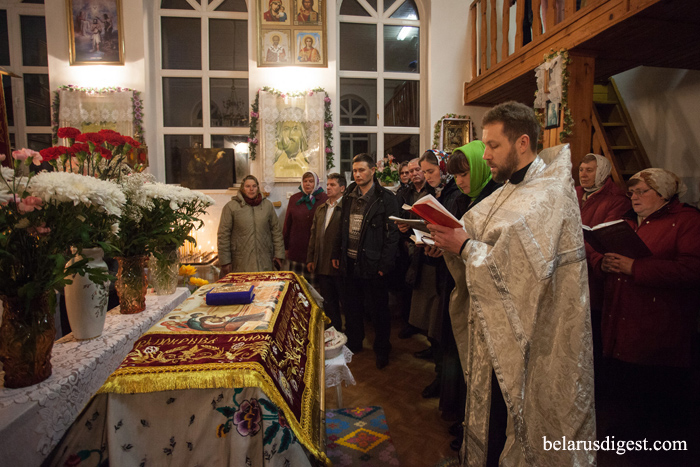 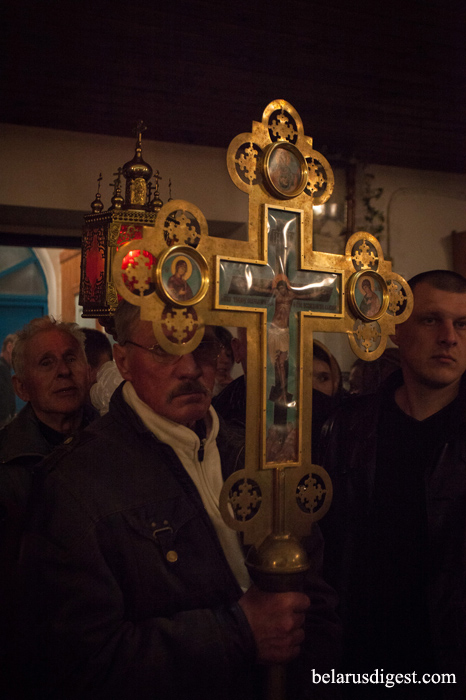 A believer holds a decorated cross during the Easter service in Zaskavichy. 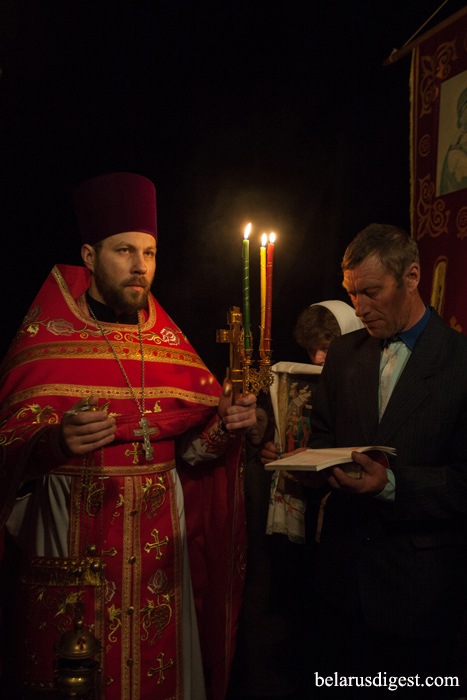 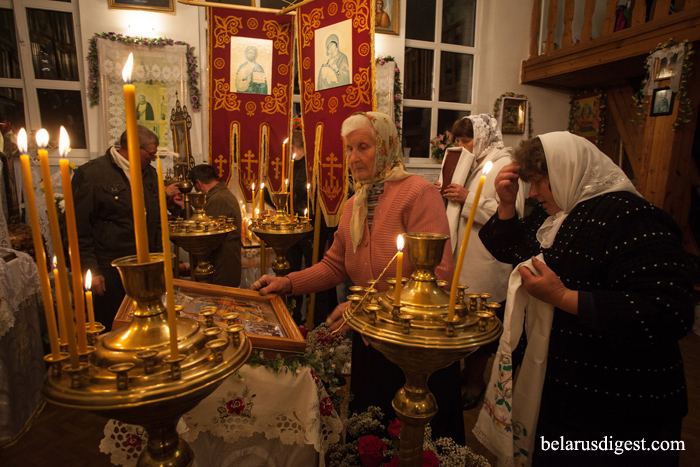 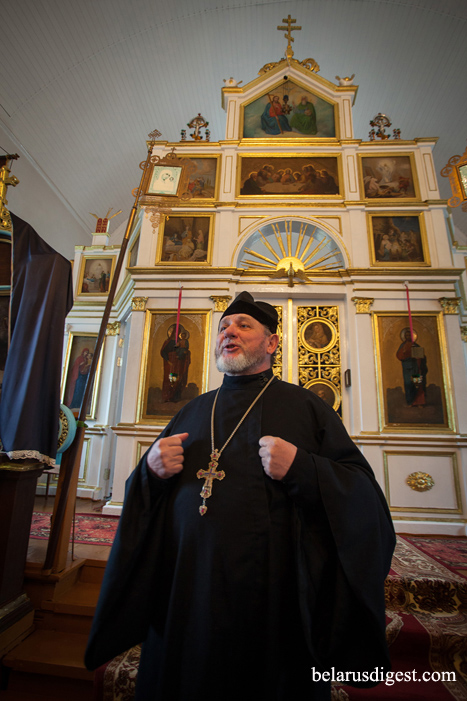 Belarusian Orthodox Priest in the church of Kreva, Hrodna region. 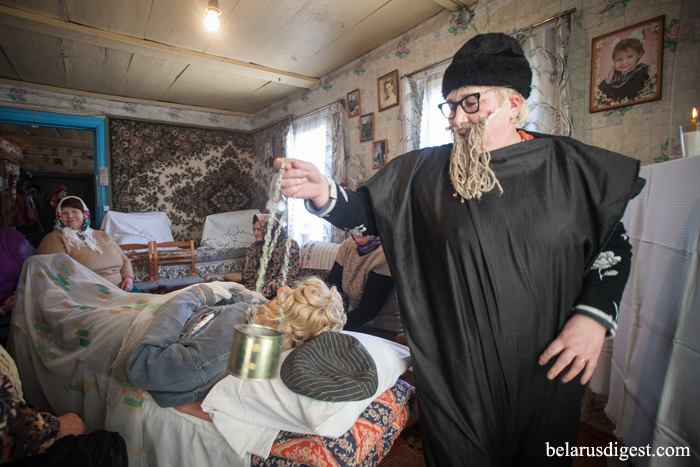 Maslenitsa celebration during the last week before the Great Lent in Vitsebsk region. Women are “burying an old man,” according to a pagan tradition, marking the end of winter. A greedy and salacious priest is one of the traditional participants in the ceremony. 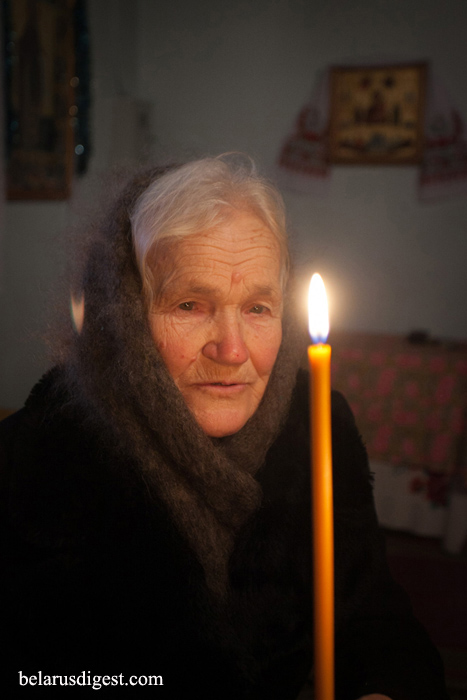 An old Belarusian woman prays and lights a candle. 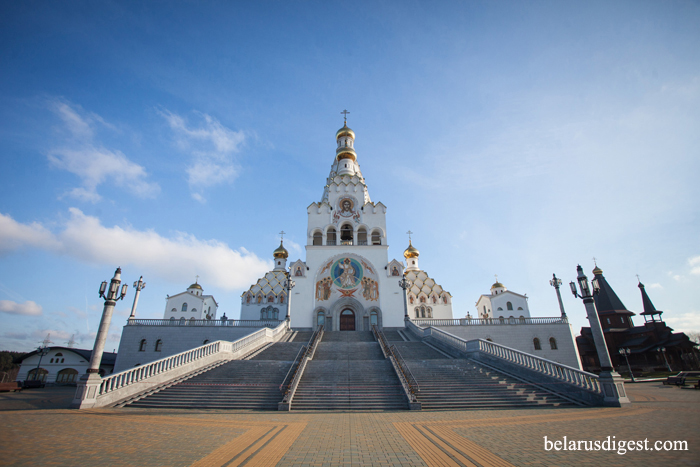 All Saints Church in Minsk, completed in 2008. President Lukashenka, who once identified himself as an “Orthodox atheist”, has attended several holiday celebrations in this church with his youngest son.