On 23 March, Alexander Lukashenka asked journalists to send him their suggestions for a candidate for a new prime minister of Belarus.

For a long time the leader of the Belarusian has been intensifying his rhetoric about his dissatisfaction with the economic results of... 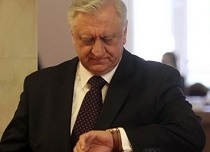 On 23 March, Alexander Lukashenka asked journalists to send him their suggestions for a candidate for a new prime minister of Belarus.

For a long time the leader of the Belarusian has been intensifying his rhetoric about his dissatisfaction with the economic results of the government and replacing Mikhail Myasnikovich. Still, his resignation may happen only next year.

The Head of the Presidential Administration Andrei Kabiakou, chairman of the Development Bank Siarhei Rumas or the Speaker of the House of Representatives Uladzimir Andreichanka seem to be the most likely candidates for the premiership. Lukashenka has limited choices and no candidate will make a real difference.

The prime minister in the Belarusian system is but a mere puppet of Lukashenka, unable to conduct deep economic reforms in the country.

On 23 March, Alexander Lukashenka confirmed that he is still considering removing the current government and is search of an official who could replace Mikhail Miasnikovich as a prime minister. The Belarusian head of state is looking for a new prime minister in the upper echelons of the state apparatus. According to him, there are about 35-40 people there under consideration.

Alexander Lukashenka is considering the resignation of the government due to the economic problems facing the country. In particular, the Belarusian leader is troubled by the warehouses filled with Belarusian products that nobody wants to buy. Simultaneously, Lukashenka reasonably states that this is partly due to the fact that the West and the East today lack a favourable economic common ground.

The Belarusian economy, meanwhile, continues to deteriorate. This year Belarus is trapped in a recession, and inflation continues to rise, despite the fact that in neighbouring countries, it is almost nonexistent. The prime minister does indeed appear to be unable to fix the economy.

Candidates for the Prime Minister's Chair

Although Lukashenka said that he would choose the future prime minister from a pool of 35-40 people, the media and experts have independently determined most likely successors to Myasnikovich. The leading candidates are:

Andrei Kabiakou, Head of the Presidential Administration, has a good personal relationship with the Belarusian head of state. He has served as vice-Prime Minister for 10 years and was the ambassador of Belarus to Russia. Although born in Moscow, he received credibility among managerial elites for his toughness in his negotiations with the Kremlin.

Siarhei Rumas, Head of the Development Bank, has long been considered as one of the supporters of liberal reforms in the Myasnikovich government. He is known as a man who can make things happen. He speaks several foreign languages ​​and knows how to work with international institutions. At the age of 44, he remains one of the youngest officials in Belarus.

Uladzimir​ Andreichanka, Speaker of the House of Representatives, has been in power for a long time and has led the Vitebsk Regional Executive Committee for 14 years. He has led the House of Parliament since 2008. In a Belarusian context, this means that that he has been doing next to nothing. Lukashenka recently returned a few deputies to positions of real power, and Andreychenko may be the next in line.

Uladzimir Makei, Minister of Foreign Affairs, has become known as the architect of the previous dialogue between Belarus and the EU. Previously, he was a member of the state security services, worked in the Ministry of Foreign Affairs and headed the presidential administration. Consequently, he lacks a deep understanding of economic matters, so his appointment as prime minister would come as a surprise.

Siamion Shapira, head of the Minsk Regional Executive Committee, has long been considered as a liberal amongst the ruling elites, although lately he personally gave the order to fire scholar Andrei Charniakievich from his university position for a book about the history of Hrodna. Lukashenka invited Shapira to the government before, but he asked to stay on as governor.

While this list defines the potential candidates for the post of prime minister, Lukashenka may choose another person on purpose, one who is not particularly popular today.

Will There be Policy Change After a Change of Government?

The Belarusian political system is built in a way that it is of no consequence who occupies the post of prime minister. The government remains but an executioner of the president's will. It lacks any real authority and sometimes even acts as Lukashenka's whipping boy. During meetings with Lukashenka, Belarusian senior officials tend to look at the floor rather than directly in his eyes.

The fact, that Lukashenka remains reluctant to speed up the process of finding a replacement for the premiership after speaking about it for a few months, confirms he has other designs. The appointment of a liberal in the government does not mean that the government’s policy will be liberal as the PM that "runs" it. Rather, it will continue to follow the the direct orders of its populist master.

Belarus' problems are related not only to the worsening economic situation, but also to the structural deficiencies of the economy. However, the current authorities appear reluctant to liberalise the economy and privatise enterprises, so the long-term improvement of the Belarusian economy remains unrealistic. Last month, the Minister of Agriculture and Food presented a recovery plan for Belarusian villages. However, the plan lacks even basic private property rights.

In general, the head of the Belarusian state has a short list to choose from. Most capable managers left the ruling elite back in the 90s, and talented young people are not eager to join up. Although the authorities continue to declare their desire to bring back successful Belarusians from abroad, these statements fall on deaf ears. A personnel shortages remain one of the greatest problems for Belarus.

The search for a new prime minister appears to be little more than shuffling of an old deck of cards. Whatever card Lukashenka pulls, the result is already clear. Belarus needs someone truly new. 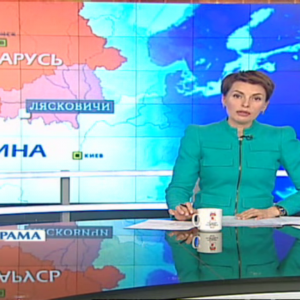 Journalists also reminded the harm to the state and society which corruption could pose. However, in their opinion Belarus, unlike Ukraine, is successfully combating the problem.

The Belarusian opposition commemorated Freedom Day, organising a rally through Minsk. On this occasion, it expressed its support for Ukrainians. State TV journalists depreciated the rally and compared with nationalistic movement.

‘Usually they celebrate the so called ‘Freedom Day with symbols that remain distant to the Belarusian history’, journalist critically noted. In his opinion, the annual rally also this time gather just a few people, and it did not present neither ideas nor historical facts.

In his coverage, reporter was persistently comparing the Belarusian opposition and the participants of the rally with nationalists. reminding the viewers that nationalists helped Hitler in Nazi operations in Belarus and Ukraine.

How to make small business driving the Belarus economy? The authorities want to increase the role of small companies in energising the state economy. In the opinion of (unnamed) experts small business’ contribution in GDP will increase twice, even up to 50%, until 2020. To achieve that, the authorities want to significantly reduce the cost of loans, and offer loans in the Belarusian rubbles, not only in the foreign currencies.

Corruption remains a serious threat to the state and society. However, the state successfully deals with it, unlike in the neighbouring Ukraine where it led to overthrow of the authorities. According to journalist, Belarus has a good legislation that prevents the corruption. ‘Other countries use our experience’, he proudly emphasised. Journalist presented the most critical statements of the Belarusian leader addressing the problem of corruption.

Lukashenka met with representatives of media. He widely discussed Ukraine and Crimea. The head of state sadly commented the developments in the neighbouring country, a ‘third part of our Slavic world’.

‘That was not a legal a constitutional process (…) This is not a normal thing when the legal authorities are overthrown and they establish the new authorities’, Lukashenka stated.

Although he took a note that the new Ukrainian government consisted of both professionals and shouters, he is ready to work with any authorities.

Commenting on Crimea, he noted that it has already become a part of Russia. ‘You can recognise it or not, but nothing will change because of that’, he strongly argued. The head of state laughed at the imposition of sanctions on Russia’s officials, who anyway did not travel that often to Europe.

Political scientists and economists commenting upon Lukashenka’s interview, praised him for his adequate reaction to the development in Ukraine. Referring to Crimea, reporter pointed out that it has de facto become a part of Russia, and thus any negations of that appeared senseless.

Belarusian journalist reported that the audience gathered in the studio applauded and wholeheartedly supported Lukashenka. But also the Internet users in Russia and Ukraine also praised the Belarusian leader for his position in regard to the conflict between Kiev-Moscow. This unanimity brings hope that a dialogue between the neighbours will once again be constructive, journalist concluded.

The Ukrainian Maidan was scrupulously prepared. Journalist informs that the ‘main driving force of Euromaidan, the Ukrainian radical organisation "the Right Sector" has become a political party'. It embraces now a number of nationalistic organisations. Reporter also pointed out that the events on Maidan were not such spontaneous, as presented, but scrupulously prepared in advance. TV showed videos, found on the Internet, presenting people complaining that were not paid for their participation in Maidan.

How legitimate is referendum. The host of the talk show, Vadzim Hihin, invited the regime-friendly politicians, but also the opposition-minded analysts, including Aliaksandr Klauskouski, Andrej Jelisejeu, and journalist, Viktar Marcinovich, to comment on the Crimean referendum. The pro-regime guests did not express any concerns regarding its fairness and legitimacy.

Some argued that Crimea, as a part of Russia, would be able to improve the economy. Klaskouski noted that the official statistics on the referendum looked suspicious. In his opinion, it was impossible to organise a real political agitation within such a very short period of time, and clearly the violations took place.

Sanctions on Russia. ‘Some countries which criticised Russia that had acted in a similar way before’, one of the discussants argued. All economic sanctions will be harmful for Europe, Russia, but not for the US. Thus, Europe is not interested in imposing sanctions and nothing like that would happen – as one of the guest speakers emphasised.

On the other occasion, in ‘Lessons from the Ukrainian conflict’, participants of Pazicija talk show discussed how Belarus should get involve and help Ukraine.

The Orthodox Church and events in Ukraine. Participants commented upon the recent statement of Lukashenka on the situation in Ukraine. There was unanimity among participants and hosting the programme, Vadzim Hihin – all praised the Belarusian leader for his position on the conflict. An Orthodox priest, father Fiodar Pouny, also noted that Lukashenka felt the situation in Ukraine deeply. He presented the Orthodox Church’s statement, prepared by Synod in Istanbule, calling all who care about Ukraine to cease violence and further disorder.

Is Maidan likely to take place in Belarus? In the opinion of all discussants the Maidan scenario is hardly possible to happen in the country. Primarily it is because countries chose different paths in the early 1990s. According to one overwhelming opinion of the participants, the parliaments in both countries work differently, and in Belarus it works more efficiently than in Ukraine.