As the new diplomatic war between Belarus and the European Union unfolds, Belarus may lose its right to host the World Ice Hockey Championship in 2014. Because of problems with democracy and human rights The Congress of the International... 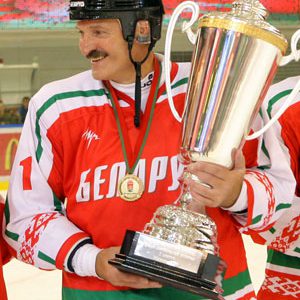 As the new diplomatic war between Belarus and the European Union unfolds, Belarus may lose its right to host the World Ice Hockey Championship in 2014. Because of problems with democracy and human rights The Congress of the International Ice Hockey Federation (IIHF) may reconsider its decision taken three years ago.

According to IIHF Communications Director Szymon Szemberg, the reason is numerous demands from human rights groups and Western governmental organisations. IIHF President Rene Fasel stated in the past that sports had nothing to do with politics. But in Belarus sports are much more than just sports. It is one of the ideological pillars of Aleksandr Lukashenka’s politics.

Sport As a National Idea

For 20th century totalitarian regimes, sport became a tool of mass indoctrination and propaganda. ‘Sport constructs the culture of optimism and cheerfulness,’ stated a Bolshevik ideologist Anatoly Lunacharsky. Not surprisingly, Soviet authorities maintained a widespread system of state sport associations, clubs and competitions. During the most terrible period of political repressions in 1930s, Joseph Stalin enjoyed watching pompous mass marches of Soviet athletes and football matches at the Red Square in Moscow.

Alexander Lukashenka, elected as the first President of Belarus in 1994, loves massive parades too.

In the late 1990s, after the break-down of Belarus-Western relations, it was Lukashenka who proclaimed that ‘our athletes are the best diplomats,’ and their performance showed the front of the country. When his ideologists failed to produce a coherent state ideology based on the the Soviet period of Belarusian history rather than on national traditions or democratic values, sport was promoted as a national ideal for the state. To demonstrate his serious intentions, Lukashenka appointed top security figures (siloviki) to the key sport federations’ positions.

Since 1997, Lukashenka himself has been the president of the Belarus National Olympic Committee. All major sport events and appointments to the national team take place with his approval. Every two years the ruler assigns the number of medals Belarusian athletes must win in Summer and Winter Olympics.

Sport as the Ruler’s Plaything

Being a huge ice hockey fan, Lukashenka decided to start promoting this particular sport in Belarus. Ice hockey requires immense infrastructure and investments. An average Belarusian has to pay his full monthly salary to buy ice hockey equipment for just one 10-year-old boy.

As the first step, Lukashenka ordered construction of new ice hockey venues across the country. In 1994 there were only three indoor arenas, today there are 23, and 23 more are under construction. Belarus’ leader does not care that most of the venues are too expensive for Belarus and will not pay off in the near future.

Lukashenka visited the Olympic Games at least twice – in 1998 in Nagano and in 2008 in Beijing. However, world ice hockey tournaments usually take place in Western countries closed for ‘the last dictator in Europe’ because of visa sanctions. To fix the problem official Minsk applied to host a World championships several times. Finally, the Congress of the IIHF supported Belarus’ tender in May 2009.

Then Lukashenka wished to have a super ice hockey club in Minsk. Within a few years, over 60 foreign players have appeared on the roster of Dinamo Minsk and participate in the Continental Hockey League. This star team costs tens of millions of dollars a year, and it is not entirely clear who sponsors the club. Experts point to the state-owned JSC Belaruskali – one of the world's biggest producers of potash mineral fertilisers and its affiliates. Like in the USSR, Belarusian sports is not commercial and almost entirely depends upon state subsidies.

Easier to Buy Than to Train

The need to carry out the president's orders for medals and to challenge the developed Western states makes Belarusian sports an important tool for the regime’s propaganda. Instead of investing state money into the nation’s healthcare, or the promotion of junior and college sports, Belarusian functionaries ‘buy’ trained athletes abroad – mostly in Russia. While these ‘Vikings’ receive all the amenities immediately, many young Belarusian athletes stay unwanted and leave the sport in the early stages of competition.

Officials say that the huge financial spending such as those for ice hockey is justified because people enjoy the show. Around 14,000 spectators usually attend home games of Dynamo Minsk. That is a lot. All authoritarian regimes follow these tactics: to give its people bread and circuses distracting their attention from politics and real life problems.

Why There Is No National Sport in Belarus

Still, ice hockey cannot be regarded as a national sport in Belarus. It will never become like basketball in neighbouring Lithuania. There is a basketball ring in every Lithuanian courtyard, and the whole nation plays it. As a result, with only 3 million inhabitants Lithuania regularly wins medals at the major international forums.

Sports are a part of the Lithuanian market system and by contrast to Belarus, Lithuania’s authorities do not aim to send its representatives for half of the Olympics’ program events. Instead, the state supports one national sport – basketball, and a real cult of sport reigns in the country. Young Lithuanians find it patriotic, fashionable, attractive and accessible to go into sports.

Belarusians do not have such a feeling. Of course, they rejoiced when Belarus hockey team managed to beat Sweden in the quarterfinal of the 2002 Olympics or Belarus gained 19 Olympic medals in 2008. However there is no one national sport which would be accessible to everyone in Belarus. In fact, Belarusians do not have the cult of a sports at all.

Whatever the decision of the Congress of the IIHF regarding Minsk as the host city for the 2014 championship will be, one thing is clear. For the country where seven out of nine opposition candidates can be imprisoned right after the presidential elections, and the permanent ruler manages its National Olympic Committee, sports are an important tool for internal ideology and external propaganda.

Kanstantsin is a contributing author. He is a Belarusian journalist currently doing an MA in International Politics at City University in London. 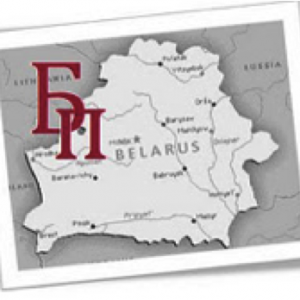 How interesting is Belarus for Europeans? This was the question held in mind by a group of students of European Affairs in Sciences Po Paris, who have been conducting for already five months a project dedicated to Belarus, 'Бelarus Project'. To find the answer to this question, they have interviewed a good number of young, and not so young, people from Europe and from all over the world.

The survey was completed in the first days of 2012 by more than 233 people. 63% of the respondents, aged between 20 and 35 years, were either from Italy, Germany or France. The rest represented citizens from all the other countries of the European Union. As is common, there were some exceptions: some replies arrived from Russia, Peru, Brazil, Egypt and even from Japan. Three simple questions were asked: why is Belarus interesting, why is it not interesting, and what would you like to find out about it. Here is what people replied.

Not very surprising was the refrain 'I don’t know anything about Belarus', with some highlights from Great Britain such as 'I can’t place it on a map'. In fact, the general impression was that people know very little about this country. Several stereotypes emerged: vodka and beautiful women were of course present, but cold weather and similarity to Russia were also mentioned. Nevertheless, the most popular answer in all categories was politics, with 20% of all replies. Let’s take a closer look.

Question 1: What Do You Think Is So Particular About Belarus That Makes or Can Make People Interested In It?

In about 21% of replies, the interest of people was captured by Belarusian politics: among them, concerns about human rights and the death penalty, the international isolation of Belarus ('It has still an iron curtain'), but most of all the Belarusian regime, was described in half of the replies as 'the last dictatorship of Europe'.

The majority of Germans were interested in tourism, they asked about language, culture and Belarusian cuisine, but somehow in very general terms. Yet, Grodno (the city) and Belovezhskaya Pushcha (the national park) were mentioned absolutely unambiguously, to our surprise. Some people wrote about Belarusian nature and geography, about the proximity to our sister country, Russia. The latter caught interest due to its influence on the Belarusian economy. Intriguing was that 12% considered interesting the history of Belarus, in particular its Soviet period. Maybe it is high time to build a museum of the Soviet Union in Belarus?

Question 2: What Do You Think Makes People Not Interested In Belarus?

As expected, the majority wrote that Belarus is not interesting because it is unknown. The reasons, however, varied. So for example the French complained about 'lack of media coverage in international press' and Italians spoke about 'lack of tourism'. Besides those who could not find Belarus on the map, there were some quite extreme answers, expressing a 'lack of knowledge of the very existence of the country'.

Another 16% of replies considered Belarus uninteresting because it is unimportant 'either politically or economically'. One third of them described Belarus as nothing special, and one very brave German even went so far to say that Belarus 'is everything but cool'. Our interest was also drawn by the replies that compared Belarus to Russia saying that 'it is almost the same as Russia, but less interesting', or for example that other neighbouring countries (obviously meaning Ukraine) get more attention.

Other responses mentioned again the political situation (11%), mainly attributing the low interest for Belarus to isolation and stability (it is boring if nothing happens), and also economic conditions, together with crime and other social factors. Some other replies referred to geographical reasons, characterising Belarus as 'a small, cold country in the middle of nowhere'. Our team hoped that the answer was written by someone who could not locate Belarus on the map, but was ashamed of saying it.

Question 3: What Would You Like To Find Out About Belarus?

After a bucket of ice-cold water, let’s have a look at what the European neighbours wanted to know about Belarus.

Roughly 30% expressed a will to find out about Belarusian culture, from the language to the food and its history. Particularly interesting was the origin of the name of the country 'Belarus' and the difference of the nation compared to Russia. Tourism has also not been forgotten, as someone from Germany asked: 'Will I be able to travel there without knowing a local language?'.

Besides the position on the map, there were questions about the Belarusian civil society, economic situation and everyday life of Belarusians. Respondents also wanted to know 'Who are Belarusians?', 'Why do they hate Russians?', 'What relationships do they have with European Union and Russia?' and 'How do they fight for their freedom?'

It is obvious that people abroad know almost nothing about Belarus. It is quite surprising to hear Europeans saying that Belarus is small and far. But by far the most shocking is the label of a sad and grey country hanging on it. Europeans see Belarus only as an arena for political disputes: the last dictatorship of Europe. Famous Belarusian hospitality and warm-heartedness were not mentioned even once.

Nevertheless many replies concerning tourism indicate the desire to get to know the country, its culture and originality. Some 10% wrote: 'What is there interesting about Belarus?' or 'Why should I be interested in this country?'. These questions need to be answered by Belarusians themselves, who should take position on how they should be seen from Europe.

By Marta Palombo and Artyom Pugachev. The original version of this article was prepared for the Belarus Project, a blog on Belarus run by Sciences Po students in Paris.