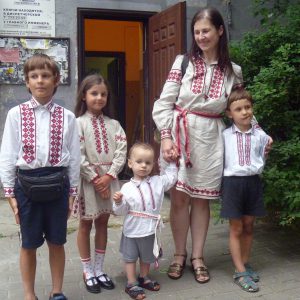 Independent Institute of Socio-Economic and Political Studies (IISEPS) releases fresh data of a September national poll. It turns out that the Belarusians are ready for changes, but it is less associated with the opposition.

Belarus in the international focus

EaP Media Freedom Watch: Belarus is again at the bottom. Georgia remains the leader of the Eastern Partnership Media Freedom Index for the first half of 2014. Azerbaijan and Belarus are at the end of the ranking. The EaP Media Freedom Index is compiled quarterly and calculated by summing up the points obtained by participant countries in four sections – Politics, Practise, Broadcasting and Internet and new media.

Program to support grassroots in Belarus. Civic Belarus Czech NGO invites to cooperation and offers a program of long-term support for the groups of local activists. The mission of the program is not only the financial support of grassroots; the priority is capacity development of initiatives and improving the quality of their work. Applications are accepted until 17 November 2014.

TECHMINSK Fall Batch 2014. On 1-31 October TechMinsk, the first International Entrepreneurship School in Belarus, has started its work. TechMinsk prepares the next generation of global entrepreneurs and change makers from Eastern Europe and help them build rapid high growth companies and go global. A 5-week program is a combination of educational, mentoring and networking tools. 80% of all courses are taught in English.

Human rights activists announce week against the death penalty in Belarus. Various human rights activities will be held from on 5-10 October under the slogan 'The death Penalty is Murder’. The events will be attended by honorary foreign visitors, ambassadors, famous creative people, relatives of executed convicts shot and sentenced to death, advocates and activists of the abolitionist movement in Belarus. The Human Rights Centre ‘Viasna’ invites everyone to join the activities of the Week.

Age Friendly City Campaign to be developed in Hrodna. On 1 October on the International Day of Older Persons, at a media breakfast, Hrodna Golden Age University announced the start of developing an Age Friendly City campaign in Hrodna. The campaign's goal is to engage representatives of public, government, academic and profit organisations in the development of specific actions aimed at improving the quality of life of older people and using their potential for the benefit of society. The organisers also presented for journalists the latest results of the Global AgeWatch Index 2014.

Voice of the People is for the People – Independent Institute of Socio-Economic and Political Studies (IISEPS) releases fresh data of a September national poll. According to the survey, the Belarusians are ready for changes, but it is less associated with the opposition. Namely, 17.5% of the respondents consider themselves involved in civil activities, almost 40% participated in various charity events, and 18% signed a petition. The level of trust to the president continues to rise: 45.9% in March, 49.6% in June, and 53.5% in September.

Presentation of a research on a potential for solidarity in Belarusian civil society is to take place on 7 October in the Minsk business club IMAGURU. The research was conducted by the Centre for European Transformation (СET) and Belarusian Institute for Strategic Studies (BISS) and notes a decrease in the ability of citizens for joint effective political and social action, despite the growing number of petitions, public statements, and collecting signatures.

Zmicier Vajciushkevich officially excluded from the ‘black list’. The musician is preparing for his first legal solo concert after a three-year break. Minsk city executive committee issued a certificate for Zmicier Vajciushkevich's concert, which is planned on 29 October in Minsk. Black list appeared in 2011 and includes well-known musicians, writers, actors from Belarus, Russia, Europe and Hollywood who anyway protest against repression after the presidential elections of 2010.

Do Belarusians Need Democracy to Live Longer and Healthier? 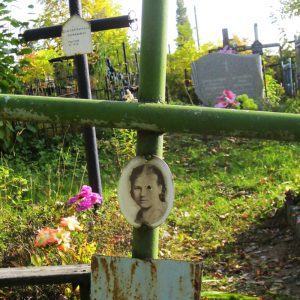 Over the past two decades, the Belarusian population declined by nearly seven percent. By 2050, demographers are predicting an over 30% decline.

The shrinking pool of Belarusians is in part driven by a high death rate. While Belarus has converged with Western Europe in terms of fertility, it ranks well behind the developed and even developing world on mortality measures.

The Belarusian government has sought to address the demography problem by stimulating the birth rate. Ambitious plans such as rewarding the birth of the third or subsequent children with a $10,000 USD allowance were debated at 21 August meeting on state support for families with children.

Minsk has done nothing to combat high mortality, however. In fact, the authorities are contributing to the high death rate by keeping the price of alcohol and tobacco low.

Out of Pace with the Rest of the World

Over the last six decades, life expectancy has been rising across the globe. For a long time, Eastern Europe was no exception – that is, until the Berlin Wall fell in 1989. 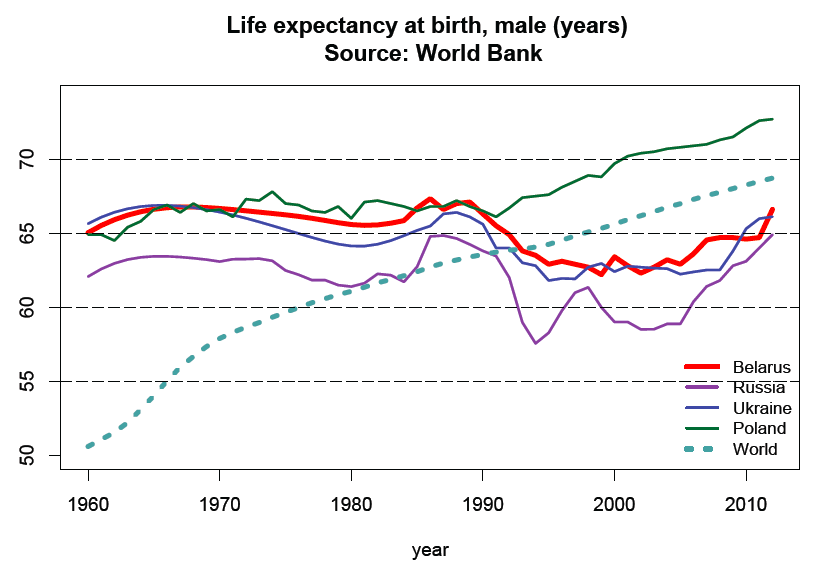 After 1989, life expectancy continued to rise in the post-Communist states that were on track for the EU membership. In post-Soviet states, by contrast, life expectancy gains were reversed. Russia experienced the starkest reversal, with male life expectancy falling by 6 years between 1990 and 1994.

The situation is particularly bad for Belarusian men. The country’s male life expectancy was higher than the global average in the 1960s. Today it is two years below the world average.

Why Are Belarusian Dying?

A leading cause of death in Soviet times, coronary heart disease, has risen in post-Soviet Belarus due to unhealthy lifestyles and eroding healthcare systems. According to the 2012 edition of the European Cardiovascular Disease Statistics, coronary heart disease accounts for 36% of deaths among Belarusian men, ranking Belarus a narrow second behind Ukraine (38%) in the post-Soviet space. 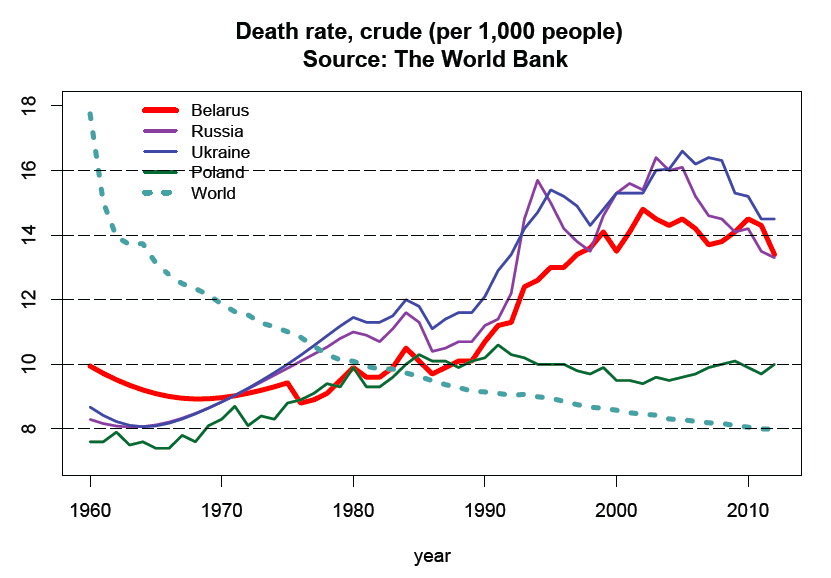 Risk factors for coronary heart disease include smoking, alcoholism, and obesity. Belarusians indulge in all of these unhealthy activities. In 2014, the World Health Organisation ranked Belarus first in the world in alcohol consumption. The country has the highest share of young cigarette smokers in the post-Soviet space. Belarus also leads Europe in the share of obese and overweight women.

About half of Belarusians who die prematurely have been smoking, drinking, or both. An average middle-aged Belarusian has anywhere between 3 to 7 chronic diseases, according to a study by Belarus’s Republican Centre for Cardiology.

Dying from the Soviet Past?

At first glance, the dramatic decline in life expectancy seems to have started with the collapse of the Soviet Union. Belarusians started drinking – and dying – in greater numbers in response to political, social and economic changes of the early 1990s.

At the same time, contemporary mortality trends exhibit many features that were already present in the 1980s. In particular, coronary heart disease was a prevalent cause of death already in Soviet times. Alcoholism was a serious enough problem for Mikhail Gorbachev to launch a campaign against alcohol abuse. Following the Soviet collapse, unhealthy behaviors became even more widespread while the health care systems weakened, producing a demographic crisis.

The Belarusian government delayed market reforms even as other post-Soviet states began experimenting with liberalisation. Initially, Belarus experienced a more moderate rise in death rates than its neighbours. At the end of the day, however, Belarus’ gradualism seems to have prolonged the decline in death rates.

On 21 August he stated that “two children are mandatory, but having three or four children needs stimulation” and promised to redirect money from “unjustified benefits” to support large families.

On the other hand, the Belarusian government keeps alcohol and cigarette prices low. State-led campaigns to combat alcoholism have been inconsistent and limited. Because alcohol is very cheap in Belarus, losers of the current economic and political situation drown their sorrows in a bottle of vodka instead of going to the square to protest.

Does Belarus Need Democracy to Live Longer and Healthier?

In 1999 Nobel Prize winning economist Amartya Sen famously remarked that “[n]o famine has ever taken place in the history of the world in a functioning democracy.” Indeed, a growing number of studies show that democracies are more likely to adopt inclusive health care policies and improve the socio-economic wellbeing of their populations.

Authoritarian regimes, on the other hand, have no interest in promoting human development because they do not need to maintain the support of a majority of the electorate to win elections.

Perhaps it is not surprising that the Belarusian state has focused on increasing birth rates instead of extending life expectancy. First, it is much harder to reduce death rates by reforming the health care system and improving life standards than it is to dole out money for families with children. Second, high death rates mean less public spending to care for the elderly.

What is more, raising alcohol prices is a highly unpopular measure. Supporting families, by contrast, creates the impression that the state truly cares about its people.

In a recent article in the New York Review of books, Russian-American pundit Masha Gessen asked why Russians are dying “at ages, and of causes never seen in any other country that is not, by any standard definition, at war.” She concludes that Russians are dying “for lack of hope.”

Even though Russia’s demographic situation is now somewhat less dire than Gessen admitted in the article, her main observation could apply to many other post-Soviet states. Lack of hope – for a better economic and political future – might have something to do with why Belarusians are drinking – and dying, too.