Musing about Nuclear Security on the Banks of Prypyat 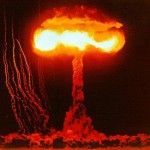 Efficiency of official gatherings is often reversely proportional to the number of people invited. This rule held true even for the Nuclear Security Summit in Washington, DC Apr. 12-13. Hosting 47 nations without...

Efficiency of official gatherings is often reversely proportional to the number of people invited. This rule held true even for the Nuclear Security Summit in Washington, DC Apr. 12-13. Hosting 47 nations without singling out any of them was a feat accomplished not only at the expense of traffic disruptions inconveniencing DC residents, but also at the expense of meaningful and binding commitments. But even then, some states felt left out – by not being invited in the first place.

As expected, Belarus was among the latter cohort, which included such debonair international actors as Iran, North Korea, Cuba, and Venezuella. While it’s “sister-nation” Ukraine basked in the fame of its “landmark decision” to get rid of all of its highly enriched uranium (HEU) by 2012, Minsk was vying for attention by brandishing the HEU stocks it intends to keep. “We still have highly enriched uranium. Hundreds of kilograms of… weapons-grade and less-enriched uranium,” said Belarusian President Alyaksandr Lukashenka. He complained of being “pushed to the wall" to remove the HEU and said “[n]obody will be allowed to make Belarus bow down.” "Let us sit at the negotiation table and decide what to do with this big amount of enriched uranium," he said, clearly upset for not being invited to the big kids’ table.

Such comments would be quite jarring at the Summit, but, of course, the leader was not invited to Washington. In fact, hosting Lukashenka in the United States would mean endorsing his human and civil rights record and creating a dangerous precedent for other nondemocratic regimes with Uranium-inflated egos. Echoing his own comments from more than a decade ago, Lukashenka said Belarus' decision to give up the nuclear weapons left on it territory after the collapse of the Soviet Union was a “severe mistake.” Back then, the newly elected anti-corruption warrior was to carry out the 1994 agreement to hand over all nuclear weapons to Russia, concluded by his predecessor Stanislav Shushkevich.

As expected, Lukashenka’s impltementation did not go without a snag: in 1995, he suspended the transfer of weapons; in January 1996, he said that NATO action may force Belarus to redeploy nuclear weapons; in 1999, when NATO forces entered Kosovo, he called the decision to withdraw weapons “a crude mistake, if not a crime.” Thus, to Lukashenka’s credit, in more than 15 years of his rule, he has been remarkably consistent on his views on nuclear weapons, unlike many of his critics.

He followed the same policy line when saying that the Soviet arsenal should have been sold rather than given up for free as well as when ready to welcom Russian nuclear missiles on the Belarusian territory at the height of the US-Russian dispute over European missile defense system. It is quite fascinating to compare the dynamics of compliance and disarmament by Belarus and Ukraine, whose destinies have been intertwined throughout history and whose similarities led social scientists to call them sisters. Both countries were affected by the Chernobyl nuclear incident and shared anti-nuclear consensus prior to independence.

Their views on the nuclear issue diverged when the Soviet Union dissolved, however. Dutiful Belarus continued to trudge along the disarmament path once the Soviet Union collapsed and acceded to the Nuclear Non-Proliferation Treaty (NPT) in July 1993. In fact, Minsk was proud to have been the first former Soviet state to join the nonproliferation regime and celebrated the removal of weapons with pomp. Compensation for giving up the nuclear weapons was never on top of Minsk’s agenda, although it was eventually rewarded for its compliance. By contrast, Ukraine’s frequent suspension of the weapons transfer process gave Russian and American policymakers numerous reasons to worry.

For example, in 1992, Kiev took ownership of the Soviet nuclear arsenal, claiming that it was created with the resources of many republics and, therefore, belonged to all of them. The Ukrainian Rada deputies repeatedly rejected the NPT, kept demanding greater security guarantees and greater compensation, and eventually threatened to retain the weapons or even sell them to the highest bidder. Notably, Kiev’s troublemaking paid off; the “problem child” Ukraine was handsomely rewarded for the arsenal it neither controled nor had built. It is fascinating to observe that Belarus’ and Ukraine’s views on the nuclear issue remain nearly opposite to each other; only the republics’ views seem to have traded places in the course of their independent histories. In the 1990s, it was Ukraine that threatened to “auction off nuclear weapons to the highest bidder if no agreement could be reached” while Bellarus was an exemplary state adhering to international norms.

Today, the Belarusian leader is as if reading from the 1994 script of the Ukrainian opposition while Ukraine is applauded for its commitment to nuclear security at the Summit. One thing has not changed at all since the early 1990s, however. Just like 15 years ago, it is Ukraine and not Belarus that is making headlines in Western papers.

For better or worse, the Belarusian President is currently heard only in his own neighborhood. Is waving the Belarusian HEU in front of Brussels’ and Washington’s noses a smart move on Lukashenka’s part? However barbaric it may seem, it is often only by scaring the global community with large HEU stocks that Belarus can get attention from Europe and the United States. One may only wonder what the country’s future would look like and whether the West would chose the same neglectful policy line, had the country insisted on keeping the Soviet nuclear arsenal on its territory up to this day.

Kurmanbek Bakiev, the ousted President of Kyrgystan, declined the offer of political asylum in Belarus. Speaking to his supporters in the south of his country Bakiyev shared his decision and the news that President Lukashenka was on his side. The Belarus president condemned the “anti-state and anti-constitutional coup d’état” as well as the Russian and United States policy towards the recent Kyrgyzstan events by calling it “very bad and shortsighted”.

Perhaps by “their people” he meant Bakiyev’s son Maksim widely known for embezzling state funds and leading lavish life in an impoverished Central Asian republic. “Their people” also meant other relatives Bakiyev put into key positions in Kyrgyzstan such as his brother Janysh Bakiyev who served as a high-ranked security official and reportedly ordered to open fire against the crowd.

Although Lukashenko has no brothers, he also has “his people” to take care of, including three sons. One of them, Victor Lukashenko, is already one of the most influential businessmen in Belarus and serves as his security adviser.

Bakiyev killed scores of demonstrators in Bishkek and still had to resign. Ironically, just a few years ago he was one of opposition demonstrators himself when the Tulip revolution brought him to power in 2005. “Strong” presidents is a curse not only for Belarus and Kyrgyzstan but for virtually all post-Soviet countries.

The exceptions are Ukraine and Moldova which are parliamentary republics. They are far from perfect, but at least there are no political killings or political prisoners. Authorities in those countries have to rely on the ballot box, not guns to defend themselves. Perhaps changing constitutions to get rid of strong presidential posts is something other countries in the region should seriously consider.