In the coming years virtually all southern Baltic Sea region states will be involved in a nuclear race. Disagreements between Vilnius, Minsk and Moscow over the Russian and Belarusian nuclear plants in the vicinity of the Lithuanian border is... 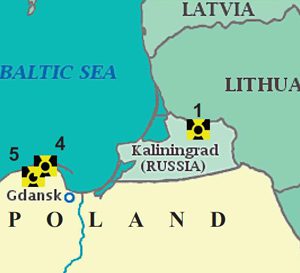 In the coming years virtually all southern Baltic Sea region states will be involved in a nuclear race. Disagreements between Vilnius, Minsk and Moscow over the Russian and Belarusian nuclear plants in the vicinity of the Lithuanian border is just a part of the picture.

In late June, Lithuanian parliament approved the concession agreement for the new Visaginas nuclear power plant. The old Ignalina plant shut down a few years ago in accordance with Lithuania's accession agreement with the European Union. Japanese GE Hitachi Nuclear Energy is to become a strategic investor of the project, Lithuania (Visagino Atominė Elektrinė) would share 38%, Latvia (Latvenergo) 20% and Estonia (EestiEnergia) 22%. Despite these agreements, the Lithuanian nuclear power plant remains a hotly contested project.

During the pre-voting debate in the parliament, Lithuanian prime-minister Andrius Kubilius urged to vote in favour of the Visaginas project, saying “those who vote against, vote for Belarusian and Russian nuclear stations”. Earlier, he publicly stated that Belarus and Kalingrad regional nuclear plants from the outset were envisaged as projects that would potentially stop the Visaginas plant project.

There is no unity among the Lithuanian political elite on this issue. On 16 July the Lithuanian Parliament voted for the referendum on a nuclear plant in Lithuania, thus highlighting disagreements between the opposition and the incumbent government.

Over the last two years previous years, Lithuanian officials on numerous occasions expressed their discontent with the planned Russian and Belarusian nuclear power plants in their backyard. Lithuanians are alarmed by the fact that both plants did not come through the procedure or an environmental impact assessment pursuant to the  Convention on Environmental Impact Assessment in a Transboundary Context (Espoo Convention).

Taking into account the slow procedures in the Espoo Convention and weak mechanisms to ensure state compliance with the recommendations made, Lithuanian authorities initiated a proposal in the EU organs to conduct the so called "stress tests" for nuclear reactors. Such tests are usually required for nuclear and radiation safety both for EU member states and neighbouring states when implementing their nuclear projects. The Commission submitted a report on "stress tests" to the President of the European Council in mid-2011 and assured that efforts would be made to engage Belarus and Russia in the process.

Although Russia and Belarus have not finalised appropriate procedures according to the Espoo Convention obligations, both have already started preparatory work on the new construction sites. Russia started construction of a nuclear station in Kaliningrad in 2010 and in spring 2012 work on concrete pouring into the foundation began. Belarusians got down to developing the foundation pit for their nuclear plant in late May.

Commissioning of the first Kaliningrad nuclear reactor is expected in 2016, followed by the Astravets first reactor in 2017 and Visaginas in 2020. The projected capacity of the latter is 3.4 thousand MW, Russia's and Belarus' power plants are somewhat less powerful at 2.4 thousand MW each. Estimated cost of both Russian and Belarusian nuclear projects is around $9bn, while Visaginas expenditures are projected to be as high as $5-7bn. The cost of the Lithuanian power plant is cheaper primarily because the Visaginas plant is designed to be placed in the area of the old plant, which removes the need to create extensive infrastructure from scratch.

(Prepared by the author)

Poland is somewhat lagging behind the neighbours. According to the strategy of the Polish Energy Group that was given a mandate to build two nuclear power plants, the first one is to be completed in 2025 and the second in 2029.

Currently Polish energy matrix almost exclusively (94%) consists of coal and Warsaw plans to diversify its energy mix. Out of hundred proposed locations three were pre-selected for the first nuclear power plant site, all near the Baltic coast. The final decision on the construction site is expected to be unveiled in 2014 together with the winner of the bid.

The Baltic Sea region is becoming intensively saturated with nuclear plants that would change its regional energy pattern in the coming years and decades and would require an intensification in the realm of nuclear cooperation between Baltic Sea region states in the near future.

Officials of the Baltic See region states involved in the nuclear race operate with contradictory scientific data to  support their intentions. On the one hand, Lithuanians are allegedly puzzled why Russians push a nuclear project in Kaliningrad which has enough to satisfy its energy demand without a nuclear plant.

Lithuanian prime-minister Kubilius lamented that Russian officials failed to explain this to him. Some even say that Russia's Baltic nuclear power plant risks becoming bankrupt as Polish energy giant PGE announced its decision to stop negotiating on power imports from Kaliningrad. Interestingly, PGE was considered a probable investor in the Visaginas NPP too, but later withdrew from the Lithuania project.

Contrary to the calculations of commercial detriment to the Baltic nuclear power plant without Lithuania's and Poland's interest in buying its electricity, Russians insist that the project will surely be profitable. According to the official "Energy strategy in Kaliningrad until 2015", the region may start suffering form an energy deficit by 2015. Rosatom also refers to the energy balance scenarios in the Baltic region by the year of 2020, prepared by the European Network of Transmission System Operators. According to them, energy deficit in the region is inevitable.

Belarus ruler Aleksandr Lukashenka in the manner so characteristic to him, explained these contradictory regional energy estimations by unfair competition. According to him, Russians in Kaliningrad and Belarusians in Astravets took the lead making in Lithuanians and Poles start "screaming" and coming up with various arguments in order to undermine the success of their neighbours.

For all that, in the regional nuclear power race Belarus seems to be the weakest link. Its Astravets power plant totally relies upon Russia's money and technology, in contrast to the other players that either aim to diversify their energy mix or lessen their energy dependency on their big resourceful neighbour.

Andrei is an analyst at Belarusian Institute of Strategic Studies. 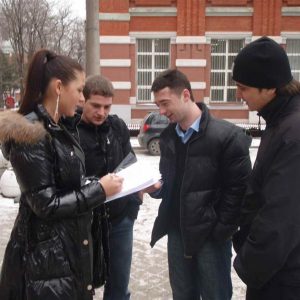 The bill further restricts possibilities for independent research of the social and political processes in Belarusian society. As a result, the quality of such research will suffer a new blow. And it is the government itself that is the biggest loser in this situation.

The Belarusian authorities began their struggle against independent pollsters in the early 2000s. In 2002 the Council of Ministers adopted a decree that established a special order for surveying public opinion in Belarus.

To conduct research related to elections, referenda and the overall social and political situation in the country an organisation had to register with the newly founded Commission for Public Opinion Surveys under the National Academy of Sciences. The decree established that the Commission would ensure the high quality of all surveys and make sure that their results were objective and correct.

The Commission got the mandate to issue licenses for pollsters and double-check the results of their surveys. If, in the opinion of the Commission, a surveying organisation published incorrect sociological data, the Commission could withdraw its license.

According to sociologist Vasily Korf of the Liberal Club in Minsk, in 2002 the state decided to do away with independent researchers whose work the authorities deemed suspicious and unreliable. What the Belarusian authorities fear is any public information that contradicts their own propaganda. And independent surveys make it far more difficult to manipulate public opinion.

Take the example of the presidential elections in 2010. Officially, Alexander Lukashenka received 79,65% of the total vote. But the several independent exit-polls and surveys produced significantly less overwhelming figures – from 35% to 58%. The authorities, of course, did not want the public to hear all those "alternative" figures.

What do the Latest Amendments Add?

These sums, of course, are not lethal. But for small independent research groups they are unbearable.

Few Want to Survey in Belarus

As a result of such repressive measures against individual and organisational pollsters, the number of independent institutions that conduct public opinion surveys related to elections, referenda and the overall sociopolitical situation are very few in Belarus. Actually, only one research group does it on a regular basis – the Independent Institute of Socio-Economic and Political Studies (IISEPS).

Since its foundation in 1992 the IISEPS has had numerous problems with the Belarusian authorities. In 2005 the Supreme Court of Belarus liquidated IISEPS for not abiding by the law on public opinion surveys. The Institute then moved to Lithuania where it got an official registration under the same name and continued its research. But its problems in Belarus did not cease there.

In October 2011 the police detained the founder of the IISEPS Professor Oleg Manaev in the centre of Minsk. Manaev was on his way to present the results of the latest nation-wide survey that revealed that the popularity of Alexander Lukashenka was at its historical minimum. While the official propaganda claimed that about 70-80% of the Belarusians supported the president at that time, according to the IISEPS, Lukashenka's electoral rating equalled 20.5%. Oleg Manaev was released several hours later but the presentation of the survey results had to be postponed.

Other independent or commercial institutions conduct politics-oriented surveys of public opinion in Belarus only sporadically. Interestingly, even in the so-called “pro-government camp” surveying organisations that deal with political issues are very few. The Information and Analytical Centre under the Administration of the President is the only institution there that carries out regular surveys.

Impact on the Quality of Research

The unfavourable attitude of the state towards independent surveying of public opinion has a clear negative impact on the quality of sociological research in Belarus.

First, researchers have to work almost underground. Needless to say that under such circumstances it is often too problematic to strictly adhere to academic research methodologies and standards.

Second, it is very difficult for researchers to stay politically impartial when the authorities permanently treat them as an oppositional “fifth column” and even crack down on them from time to time.

Finally, because of the authoritarian realities in the country the majority of the Belarusian population fear to answer political questions in public. As a consequence, many respondents who agree to talk to pollsters either abstain from giving definite answers or tend to say presumably safe things like “I support the president”.

The Government Itself is the Biggest Loser

Ironically, in this whole situation the government is the biggest loser. Restricting the work of research groups that survey public opinion the authorities deprive themselves of credible sources of information about the real sociopolitical processes in Belarus.

The state institutions that are supposed to provide such information (like the Information and Analytical Centre under the Administration of the President) are part of the state machine and cannot be independent. As numerous examples have shown, survey findings of such institutions often reflect bureaucratic rationale rather than impartial research standards.

Thus, the state and the whole of society would definitely benefit if Belarus had a well-functioning network of independent organisations to survey public opinion. Unfortunately, there is little hope that the understanding of this simple fact will prevail in the heads of the incumbent political leadership over fears of truth.