On Sunday Belarusian authorities released yet another presidential candidate - Dzmitry Us. At least seven political prisoners remain in Belarusian prisons. 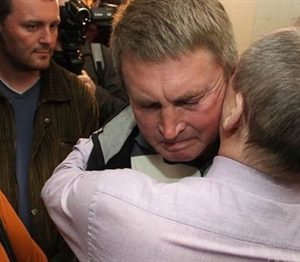 On Sunday Belarusian authorities released yet another presidential candidate – Dzmitry Us. At least seven political prisoners remain in Belarusian prisons.

Trial of last defendant in mass riot case put off till 12 October. The trial of Sviataslau Baranovich, the last defendant in the “mass riot” criminal case, has been postponed until 12 October, after the judge ruled to call additional witnesses. The trial started on August 29. Baranovich is charged for participation in mass riots and may be sentenced to up to eight years in prison.

Human rights defenders congratulate Ales Byalyatsky. On 25 September, the friends and colleagues of Ales Byalyatsky staged a street event in Minsk Nezalezhnastsi Square to congratulate the imprisoned leader of Viasna on his 49th birthday. Human rights defender Uladizmir Labkovich was detained shortly after the picket and released after three hours without a report being drawn. In addition, nearly four thousand greeting cards for Ales Byalyatsky are the result of the "Solidarity with Belarus. Postcard to prisoner Ales Byalyatsky" campaign. The campaign in aid of Byalyatsky’s birthday (25 September) was held by Polish NGOs under the "Group abroad".

Ales Byalyatsky, Chairperson of the Human Rights Center Viasna and vice-President of the International Federation for Human Rights (FIDH), was detained on 4 August 2011. On 12 August he was charged with “concealment of profits on an especially large scale” and is now in custody in remand prison #1 in Valadarski Street in Minsk. He faces up to 7 years of imprisonment with confiscation of assets.

Andrzej Poczobut not allowed to leave Belarus. Such limitation has been imposed on the journalist of "Gazeta Wyborcza" by the criminal-executive inspection. The journalist has written about this in his Livejournal blog. Poczobut was sentenced to probation allegedly for slander against Alyaksandr Lukashenka.

Three arrested opposition activists are on hunger strike in Gomel. They are Andrus Tsianiuta, Kanstantsin Zhukouski and Zmitser Shauchenka. Shauchenka was arrested on 17 September for the dissemination of information about the upcoming "silent action". The court sentenced him to 15 days of detention. Tsianiuta was sentenced to 10 days of detention for the dissemination of information about the People's Assembly. Zhukouski was arrested just before the "silent action" on 21 September and sentenced to 15 days of detention despite the fact that his leg was broken during the arrest procedure.

Human rights activist Valyantsin Stefanovich returns to Belarus. On 30 September, he managed to get through the check-point at Minsk National Minsk without any problems. Stefanovich is accused of tax evasion, as is his colleague Ales Byalyatky.

Essay contest on the rights of disabled. The Office on the Rights of the Disabled announced an essay contest and scientific papers on the topic "Accessibility and Disability", "Convention on the Rights of the Disabled". The competition aims to increase knowledge about the perspective of people with disabilities in Belarus; to promote the idea of ​​equal participation; to develop expertise in human rights with a disability. Deadline for papers is 3 December, 2011.

BPPF announces the 9th call for proposals for small grants. Within the framework of its program on the systematic support for analysis in social, political and economic studies, Belarus Public Policy Fund (BPPF), in cooperation with Belarusian Institute for Strategic Studies (BISS), announced a call for proposals for small grants. Public policy-oriented research in Belarus is supported with the aim of invigorating and intensifying the debate on key public policy issues that are not satisfactorily researched by analysts and lack public discussion.

New non-profit Association. The Association of Professional Marketing has been registered in Belarus. The founders are seven Belarusian commercial companies, including: TUTby Media, Evrotorg, Centre of System Business Technologies Satio, Belbiz, etc. The aim of the association is to promote the professional community and education in the field of marketing in Belarus.

Digest of This Week’s Belarus-Related Events in Warsaw 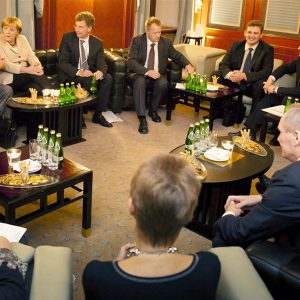 In addition to the Summit, this week Warsaw hosted a number of other Belarus-related events including the OSCE Human Dimension Implementation Meeting (26 September-7 October 2011) and an international conference titled “The Eastern Partnership Conference: towards a European Community of democracy, prosperity and a stronger civil society” (29 September 2011). Representatives of Belarusian civil society and opposition had several opportunities to meet with top EU politicians and partners from other countries in the region.

The Head of EU Delegation met participants of the NP of EaP CSF. On 26 September, in the run-up to the Eastern Partnership Summit in Warsaw, Ambassador Maira Mora, Head of EU Delegation to Belarus, met with Belarus' participants of the National Platform for the Eastern Partnership Civil Society Forum to discuss the agenda and organizational aspects of the summit.

Measures for release of political prisoners considered at OSCE conference. On 28 September, Warsaw hosted a side-event called “Ales Byalyatsky: a symbolic case of the restrictions to political and civil rights in Belarus after the 2010 presidential elections” as part of the OSCE Human Dimension Conference, arranged by a coalition of a number of human rights organisations. Among Belarusian participants were Valiantsin Stefanovich, Andrei Bastunets, Uladzimir Kobets.

Side event on Freedom of Association. On 29 September, The Assembly of Pro-democratic NGOs of Belarus, with participation of Legal Transformation Center (Minsk, Belarus), held a side event within the annual OSCE Human Dimension Implementation Meeting in Warsaw. The topic was Freedom of Association in Belarus: How to Improve Conditions of NGO Work.

Public Address of the Belarusian National Platform of EaP CSF to participants of the EaP Summit in Warsaw. On 28 September, Belarusian National Platform of EaP CSF called on the Heads of States and Governments of Countries of the EaP (Armenia, Azerbaijan, Georgia, Moldova and Ukraine) to synergize their position towards Belarus with the EU approach. The public address was due to the fact that the draft of the Summit Declaration does not include support for the EU approach on the immediate release and rehabilitation of all political prisoners as a condition for political dialogue with Belarus.

Declaration of EaP CSF. On 29 September, in Warsaw, the Civil Society Participants of the Eastern Partnership Conference "Towards a European Community of Democracy, Prosperity and a Stronger Civil Society" adopted a Declaration. In the very first paragraph they express their main concern about the recent arrest of the Belarusian human rights defender Ales Byalyacky and the danger to the lives and health of other political prisoners in Belarus.

Position paper of the Civil Society Forum to the EaP Summit. On 29 September in Warsaw, the CSF Steering Committee presented a position paper, in which it reiterates its role as a fully-fledged participant in the development of the Eastern Partnership and suggests mechanisms to contribute to its implementation. In particular, in section #1, "Strengthen democratic societies," the CSF welcomes the approach of the European Commission and the EU member states to consider civil society in Belarus as a partner despite de-facto suspension of cooperation with the Belarusian government.