Opinion: Polls and the Belarusian Reality

​On 11 October, Belarusians go to the polls in the fourth election in Belarus since Aliaksandr Lukashenka was voted president in 1994. The current campaign shares many of the features of its predecessors. As earlier, Western observers have focused... 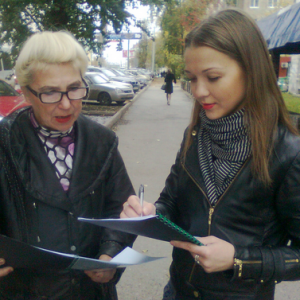 ​On 11 October, Belarusians go to the polls in the fourth election in Belarus since Aliaksandr Lukashenka was voted president in 1994. The current campaign shares many of the features of its predecessors. As earlier, Western observers have focused on opinion polls, but in Belarus few are reliable. Thus NISEPI's publications take on special significance.

Yet during and after every election, opposition leaders have criticised and raised doubts about its conclusions. A typical example was in an article of 6 October on the Naviny.by web site, where Vitali Rymasheuski, a 2010 presidential candidate, maintained that Independent Institute of Social-Economic and Political Research​ (NISEPI) surveys serve to legitimise Lukashenka.

Are such critiques valid? How should one evaluate the current campaign?

The Rules of the Game

As with his relations with the European Union, Lukashenka has mastered the rules of the game. Just as his release of remaining political prisoners appears to respond sufficiently to EU demands for withdrawal of sanctions, so every five years the appearance of the façade of a democratic election rather than the reality, replete with Electoral Commission and requisite candidates (few or multiple) implies that there is the possibility of change.

This time there are four candidates, only one of which, Tatsiana Karatkevich of the People’s Referendum, opposes the president, albeit in a relatively mild and polite manner compared, say, to the ebullient TV performance of Uladzimir Kazulin in 2006 or the eloquent denunciations of Uladzimir Niakliaev in 2010.

The others are closet if not overt supporters of Lukashenka: Siarhei Haidukevich, who reappears at five-year intervals to lose elections “elegantly” and Mikalai Ulakhovich of the Patriotic Party, which is so obscure that its web site rarely functions.

The opposition remains weak and divided, with the key question whether to boycott the elections or take part. As for the election issues, the two major ones are the economy and national security. Since he has failed in the former, the president emphasises the latter, namely that only he can ensure stability and peace. As formerly, he plays no part in election debates on television and has hardly campaigned, the underlying assumption being that he remains preoccupied with pressing affairs of the state.

After the 2010 election, NISEPI researchers concluded that Lukashenka received at least 50% plus one of the overall vote. The statement prompted some critics to comment that in this way it provided legitimacy to the Lukashenka presidency. The September poll suggests that his rating is 45.7% (those who are “prepared to vote” for him) but given the likely turn out of 72.5%, the actual vote would be 64%. Karatkevich’s support, respectively is 17.9% on paper and 25% at the polls.

NISEPI adds that these figures mask the fact that support for Lukashenka is solid, comprised of committed voters, whereas that for Karatkevich includes voters who may ignore the elections altogether. Thus 64% represents a minimal figure for Lukashenka—in fact the authorities would perceive such a low figure as demeaning.

Yet elsewhere the poll elucidates a population concerned about falling living standards, a collapsing ruble, and a drop in both the GDP and real wages. As Leanid Zlotnikau points out in Belarusian Analytical Workshop 19, rather than the anticipated wage of $1,000 monthly, the average for Belarusian workers in September was $420, or almost $100 less than in 2010. Significantly, Zlotnikau attributes the current decline less to world recession than to a decline in export prices and the fall in competitiveness of Belarusian manufacturing.

Most voters, however, do not acquire their information from such sources; they rely on television and to a lesser extent social media. The overriding feature of any election campaign is the demeaning of opposition candidates on national TV.

Interestingly, NISEPI posed the question in its September poll: if you knew of someone who could run successfully against Lukashenka in the presidential elections, would you vote for this candidate or Lukashenka? The response was 38.7% for the unknown candidate and 32% for Lukashenka (with 28.1% undecided).

Should one conclude that the current opponent, Karatkevich, then, is simply unconvincing to voters? In 2010, official media denounced more vocal opponents such as Sannikau and Niakliaiev as “enemies of the people.” Their subsequent arrests and incarceration amid accusations of an armed putsch likely solidified that perception.

In general, the frenzied attacks on those who dare to oppose the “people’s president” render candidates opponents of the regime, even a security risk to the future of the state. The authorities choose to tolerate Karatkevich, however, suggesting the threat is minor.

Opinion polls generally are not about consciousness and motives; they employ carefully formulated questions with yes or no answers. In this respect they conceal a myriad of factors that are difficult to express: not least voters’ insecurities, possible fear of repercussions (KGB repressions peaked in 2011 but few have forgotten them), and general passivity.

Elections for most Belarusians are less about democratic process than safety, job security and the future of families. Polls rarely emphasise—nor could they—the highly authoritarian nature of Belarus and its dependence on state-run industries that achieved past growth simply by borrowing or relying on Russian subsidies (Zlotnikau’s conclusion).

Yet Lukashenka, whose victory is assured, fiercely declares his independence from Moscow and poses as a maverick free agent standing up for his people. In this way polls can appear misleading. NISEPI seeks to elucidate what people think, not why they think how they do. Such surveys have value and NISEPI is an honest broker, but its simply constructed questions should not define our analysis. The regime, based on such criteria, succeeds. Yet by all the indices used to measure progress, it is failing. 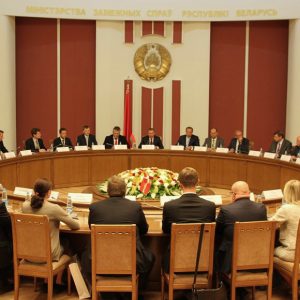 Belarus has been pursuing its strategy of normalising relations with Europe. In Minsk and European capitals, diplomats focused on strengthening trade and investment cooperation. In New York, foreign minister Vladimir Makei sought to foster further political normalisation, which many expect will take place after the presidential election to be held later this week.

On the multilateral track, Belarus' priorities remain unchanged. The promotion of the traditional family, which Belarusian diplomats mostly reduce to opposition to same-sex marriage, will likely get increased attention. Minsk also intends to play the 30th anniversary of the Chernobyl disaster card to get international assistance for the long-term recovery of the affected areas.

Belarus is actively seizing the opportunities presented by the UN General Assembly session and especially its high-level segments to highlight its multilateral initiatives and intensify bilateral contacts. 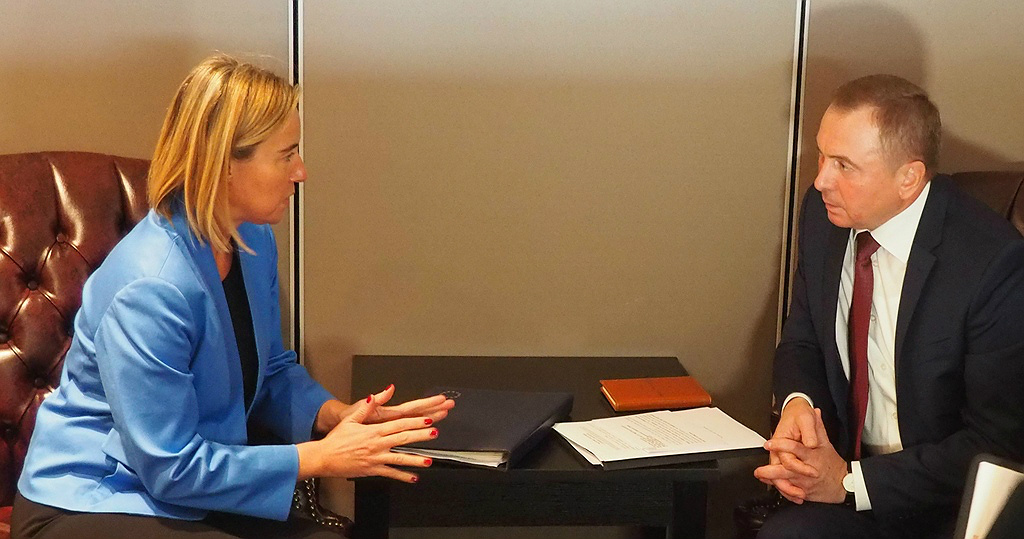 The choice of the Belarusian senior diplomats’ negotiating partners in New York, mostly European countries and Eastern Partnership members, strikingly contrasts with the usual list dictated by the need to open new markets for Belarusian exports. It clearly reflects the pressing priority of normalisation of relations with the West. In the same vein, Vladimir Makei met in New York with “senior representatives” of the US State Department who remained unnamed, probably, because of their low rank.

As to the multilateral dimension of Belarus’ participation in the UNGA session, one should not expect many novelties. In fact, the Belarusian foreign ministry chose to copy and paste fifteen out of sixteen items from last year’s priorities list, with a minor rephrasing of some of them.

Belarus will pursue its key foreign policy initiatives, such as the fight against human trafficking and protection of traditional families. The war against the universal acceptance of same-sex marriages is set to become the top priority after Lukashenka emphasised his rejection of “perverted whims” in his UN speech.

Belarus intends to maintain its strong opposition to country-specific resolutions on human rights, being a traditional target of them. However, the politicised formula about the “international human rights law, which some countries have repeatedly violated through their unilateral activities” that Belarus Digest criticised last year, has been dropped from the priorities document.

On 21 September, Belarus and Argentina held their first-ever meeting of a joint commission on trade and economic cooperation. Their agricultural ministries signed a memorandum of understanding. Cooperation in this field looks promising as Argentina remains one of the world’s leading agricultural nations. 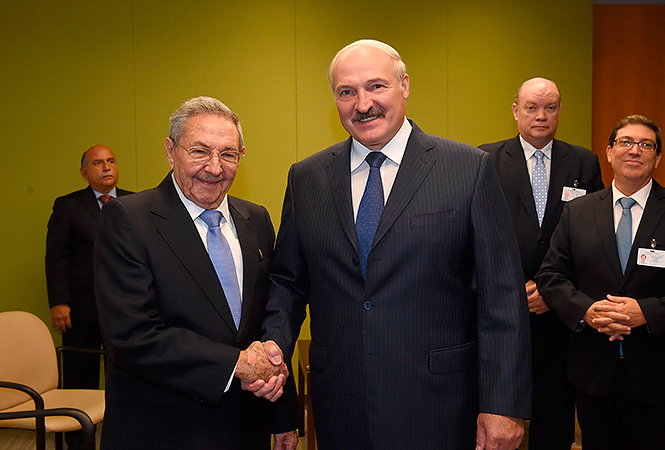 In Managua, Belarus and Nicaragua held a second meeting of the joint trade commission and signed agreements on cooperation in agriculture and on visa exemptions for holders of diplomatic and official passports. Last year, when Vladimir Makei visited Nicaragua, Belarus highly publicised its willingness to participate in the construction of an inter-oceanic waterway in the country. There was no mention of the project this year as construction has stalled due to a lack of financing.

In New York, Alexander Lukashenka met with the leaders of Cuba and Ecuador. Both countries are among Belarus’ strongest allies in the region. Belarus and Cuba actively support each other against Western attacks on human rights issues.

Expanding the Web of Ties with Europe

During the last three weeks, Belarus held meetings of intergovernmental commissions on trade and economic cooperation with five European countries. In most cases, business forums took place on each meetings' sidelines. 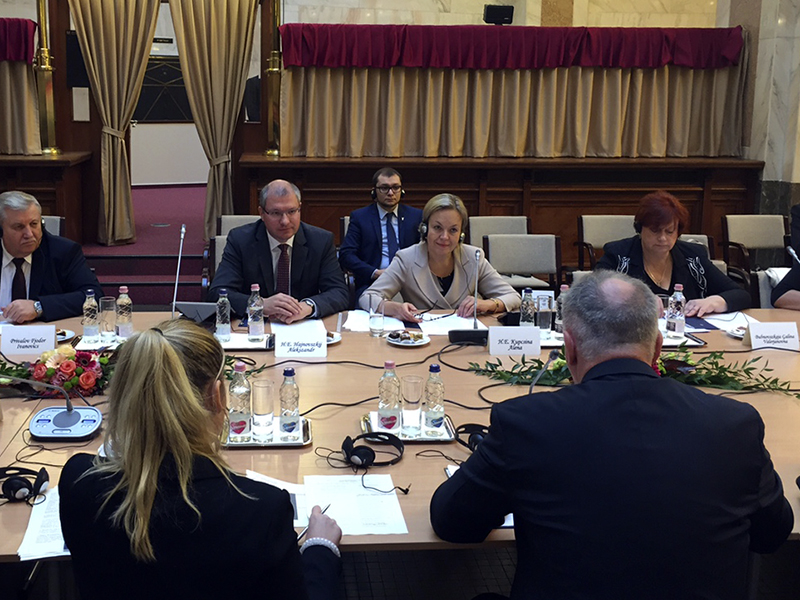 Outside of this format, Belarus held consultations with Serbia in Minsk and with Latvia in Braslau, where the Latvian foreign ministry brought 35 ambassadors accredited in Riga for a tour.

In most cases, relations with European governments are maintained at the deputy minister level, with Alena Kupchyna and Alexander Guryanov on the Belarusian side. However, Vladimir Makei met in person a large business delegation from Denmark, which visited Minsk on 22 September.

For the situation of the visa ban against senior Belarusian officials, the country’s diplomacy has chosen to engage its European partners in working-level cooperation on trade, investment, culture, science and other non-confrontational areas.

This format factors out, whenever possible, political and human rights issues where the disagreements are still substantial. In fact, the foreign ministry acts like a spider weaving a web of diverse ties with Europe. This web at some point may entangle Belarus’ European partners to a degree when the confrontation becomes costly and undesirable.