Religion in Belarus – from Orthodoxy to Protestantism?

On 26 May, Archbishop Tadevuš Kandrusievič, the head of the Belarusian Catholic Church, announced that the Episcopate is working on an alternative to concordat.

Concordat is a formal agreement regulating the relationship between the church and a secular state,... 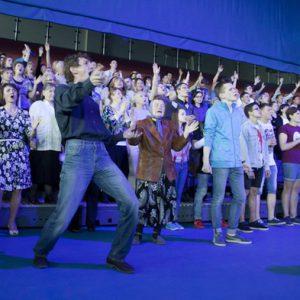 On 26 May, Archbishop Tadevuš Kandrusievič, the head of the Belarusian Catholic Church, announced that the Episcopate is working on an alternative to concordat.

Concordat is a formal agreement regulating the relationship between the church and a secular state, with the Belarusian government. If he succeeds, this would probably be the first such agreement between the local Catholic Church (not Vatican) and the government.

Leaders of religious organisations based in Belarus understand that strengthening their position vis-à-vis the government bolsters their image, allowing them to exert greater influence on society. In light of a recent study on religiosity in Central and Eastern Europe by the Pew Research Centre, there is a lot to fight for in Belarus.

According to the study, the overwhelming majority of Belarusians believe in God and affiliate themselves with specific religious organisations. Nevertheless, the number of practising believers who regularly engage in religious activities is far smaller. Unexpectedly, Belarusian Protestants, not covered in the study, might be the de facto leaders on the ground.

The most recent Pew study presents key findings regarding various aspects of religiosity in the former communist countries and sheds light on religious dynamics in Belarus. It appears that the vast majority of Belarusians (84%) declare they believe in God.

This number contrasts to statistics in Belarus's immediate neighbours, such as Lithuania (76%) or Russia (75%). More people declare they believe in God only in Poland and Ukraine (both 86%). Therefore, it would seem that Belarus is fertile ground for religious organisations, despite decades of state-enforced secularisation. 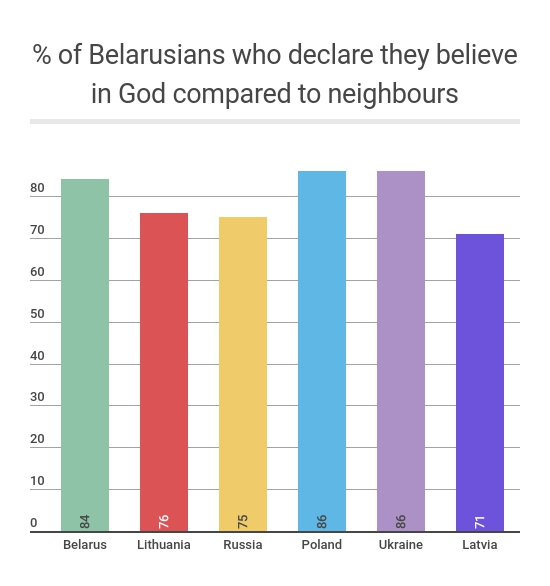 Eastern Orthodoxy dominates throughout the region, and this holds true for Belarus as well. As the study shows, 73% per cent of Belarusians identify themselves as Orthodox, 12% as Catholics, 3% declare no affiliation, and 12% are affiliated with other confessions.

Despite the high number of believers, a closer look into the reasons behind personal religiosity shows that for many people, religion holds a more ceremonial significance.

For example, only 23% of Orthodox Christians relate their religious identity with personal faith, and slightly above half of them emphasise the importance of religion for their national identity or family background. This is less true for Belarusian Catholics, 40% of whom connect it with personal faith, and 42% explain their religious identity in terms of national/family culture.

Belarusian believers: in word only?

A more practical look at religiosity can better explain the dynamics of religion on the ground. In Belarus, it appears that a typical believer rarely attends service: 12% of respondents said they do so once a week. This is twice more than in Russia (6%).

In contrast to Orthodox believers, 25% of Belarusian Catholics attend service weekly, as do 43% of Ukrainian Catholics.

In fact, according to the Pew study, Belarusian Catholics tend to engage more often in religious activities, such as daily prayer and reading scriptures, at least monthly outside the church.

The Pew report presents Belarus as following larger trends in religious dynamics throughout the region as well as in Western Europe. People claim to have an interest in religious matters, but tend not to regularly practise their faith. With regard to Belarus, this is largely explainable by its post-Soviet legacy.

As the Pew report demonstrates, there is a correlation between religious affiliation and national identification. With regard to Belarus, less than a half (45%) connect religion with their national identity. Ukrainian (57%) and Russian (51%) respondents are more likely to connect these two issues.

Membership to religious groups, as with any other type of membership, contributes to the process of socialisation of specific values, norms and attitudes. Thus, religious affiliation often corresponds to political orientation.

For example, members of predominately Orthodox societies in the region tend to support the sentiment that Russia ought to act as a balance for the West. The vast majority of Belarusian respondents (76%) agree with this view. 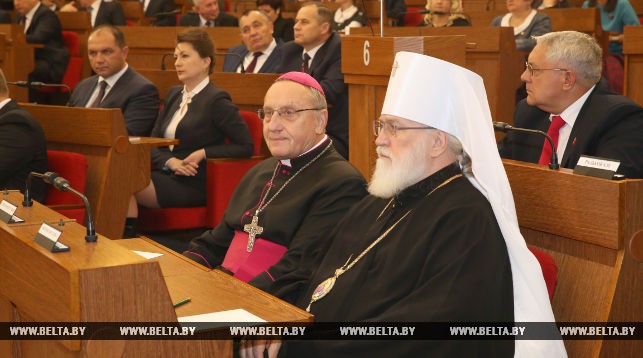 In contrast, only 22% of Ukrainians agree with Russia's need for a natural geopolitical buffer zone, most likely due to the ongoing conflict between the two countries. In other neighbouring countries, such as Poland and Lithuania, significantly fewer people support this view (in both cases 34% of the population).

Belarusians even have their own Christian-Democratic political party, co-chaired by Paviel Sieviaryniec and Vitali Rymašeŭski. In the end of May, the party leadership and its members celebrated the 100th anniversary of its establishment. Today, the party attracts mainly opposition-minded politicians who claim to respect Christian values. As the news portal Krynica.info informs, since 2007 the leaders of the party have attempted to register officially 20 times, with no success.

Is Belarus nominally Orthodox, but practically Catholic and Protestant?

One of the major features of religious life is its communal character. The majority of Belarusian respondents (62%) emphasise that the chief role of religion boils down to bringing people together.

Slightly more people (64%) think that the religious institutions should strengthen morality in society, while nearly a half (49%) consider support for the poor and people in need to be the key responsibility of religious institutions. Christian organisations in Belarus willingly engage in charitable activity. The Catholic Church, for example, does this mainly through the organisation Caritas. Certain Protestant congregations offer support for alcoholics. 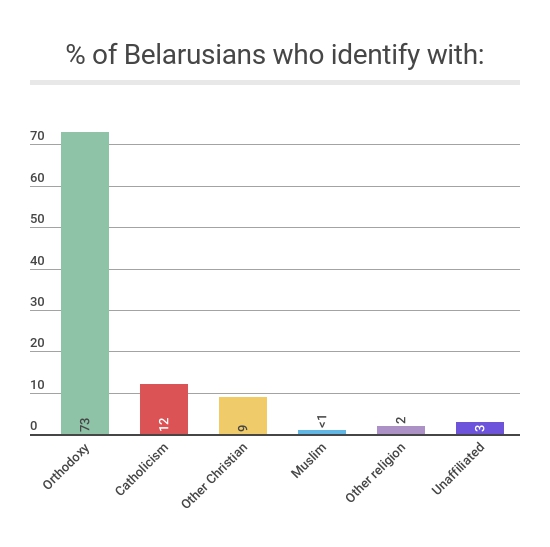 When it comes to public initiatives, the churches are able to speak the same language. For example, they are all involved in the pro-life movement. The newspaper Naša Niva reports that in 2013, the Belarusian Orthodox Church, together with the Catholic Church, Belarusian Christian-Democracts, and other civic organisations, supported a rally against abortion.

Certain Christian churches feature activity related to national revival on their agenda. For example, in an interview in 2017 with Belapan, an independent news agency, the Apostolic Nuncio to Belarus rather proudly noted that the Catholic Church engages in strengthening the national identity of Belarusians.

The Pew report, although very comprehensive, gives an incomplete picture of the religious dynamics among Belarusian Christians. Unfortunately, the authors focused predominantly on the Orthodox-Catholic paradigm, excluding Protestant minorities. Although they constitute only a small part of the population in Belarus, their activism is a remarkable phenomenon, especially given the restrictions they face from the government.

In 2015, 31.9% of all registered religious communities in the country were Protestant, which is significantly more than Catholics (14.8%) but less than Orthodox (49.6%). With this in mind, along with peoples' real engagement in religious activity, it is no longer a given that Belarus is an Orthodox country.

Paula Borowska
Paula Borowska is currently completing a PhD on religion and social capital at University College London. She holds a Master of Arts degree in Interdisciplinary Research and Studies on Eastern Europe from the University of Bologna.
all articles » Follow @borowska_by
Belarus Orthodox Church Belarusian Catholic Church Protestantism in Belarus religion in Belarus

The end of a long-lasting recession? – Digest of the Belarusian economy 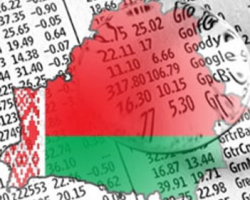 Nevertheless, the economic environment remains complex and the debt burden of enterprises is high, threatening the stability of the banking system.

On 17 May, Belstat announced that in January-April, GDP increased by 0.5 per cent in comparison with the corresponding period of the previous year, thus extending March's positive dynamics (see Figure 1). 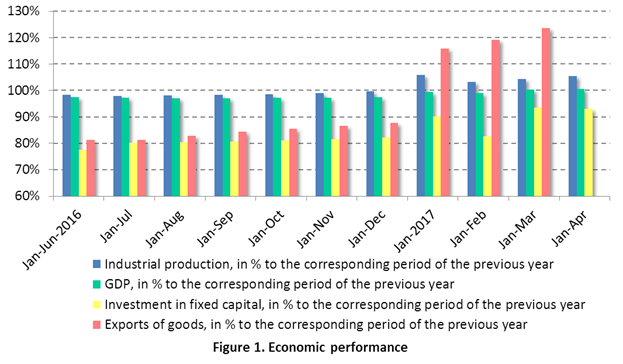 The main contributor to the recent economic growth remains export. Figures for the first quarter of the year indicate that export of goods has increased by 20 per cent, thanks to the steady recovery of the Russian economy and increase in consumer demand for Belarusian food products.

Another key factor is that the export of oil refinery products has risen from the ashes after the upward correction of world oil prices and a long-awaited deal with Russian authorities on oil import. This will mostly add up in the second half of the year.

According to economist Vyacheslav Yaroshevich, the Russia-Belarus oil deal will encourage the entire economy, thus resulting in 30 per cent year-on-year export growth and an additional 0.7 per cent GDP growth by the end of May.

Furthermore, in the second half of the year, industrial production will also start contributing to overall GDP growth. According to Vyacheslav Yaroshevich, the industry shows signs not only of growth in production volumes, but also improvements in the financial situation, including increase in revenues, efficiency of sales, and net profits.

According to data from the National Bank of Belarus, as of 1 May 2017 the amount of foreign currency deposits in banks amounted to $6.8bn – the lowest since December 2013. This trend of constant decline in foreign-currency savings has been observable since November 2015. As a result, after 18 months, savings declined by almost $1bn.

Three factors explain this trend. First is the the constant decrease in the profitability of deposits for Belarusians both in foreign and national currency.

For many years, the deposit rates on bank savings nominated in Belarusian rubles exceeded two-digit numbers. Even during periods when the Belarusian ruble was stable (the 2000s – a period of generous oil subsidies), their yield came to more than 10 per cent per year. Only in the summer of 2006, due to declining inflation, did the average deposit rate fall to 9.7 per cent.

Over the next decade, it was always expressed in double figures due to the high inflation rate. It even exceeded 50 per cent per annum during the 2011 and 2014 financial crises. However, in 2015-2017, after the National Bank of Belarus committed to reduce inflation, these rates dropped to the historically low level of 8.4 per cent. They will supposedly continue to decrease (see Figure 2). 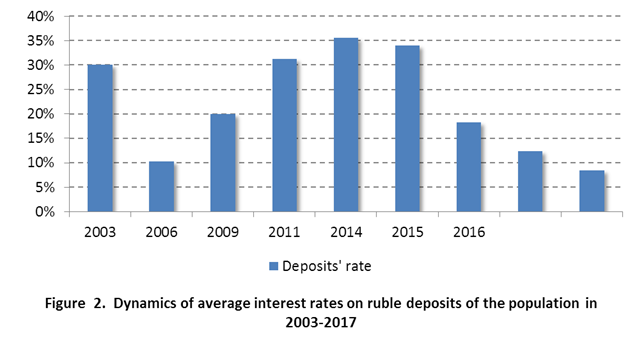 The second factor is that there are very few profitable investment projects for banks to finance. Moreover, on 1 May, the share of bad assets (generated by current operations of enterprises) in Belarusian banks reached 14.2 per cent.

According to the Senior Director of the Moscow office of Fitch Ratings, Olga Ignatieva, the quality of assets in banks will continue to deteriorate, as the economic environment is complex and the debt burden of enterprises remains high. Thus, banks have less motivation to attract new deposits.

Finally, Belarusians, who are facing a decline in their real incomes, try to maintain the same level of consumption at the expense of their savings.

According to Vladimir Semashka, MAZ struggles with production volumes. Three years ago, the enterprise produced 24,000 trucks per year, whereas by the end of 2017 it was producing no more than than 11,000. The refineries performed better, but endured financial losses due to the drop in world oil prices and the decrease in oil suppliers from Russia in 2016.

However, in light of the absence of internal financial resources, the government has only two options if it wants to fulfil its plans for modernization and foreign direct investments.

According to the opinion of economists from the investment company UNITER, Belarus must increase the annual inflow of foreign direct investments (FDI) to $3-4bn if it wants to increase economic development. However, data for 2013-2016 shows that the volume of FDI has stabilised at $1.3-1.5bn per year without significant changes in recent years.

The second option is obtaining loans from international financial organisations. Once again, negotiations with the IMF remain incomplete (nobody knows for how long), and the Eurasian Development Bank still requires more profound reforms in the Belarusian state sector (including privatisation).

Thus, in May, Belarus's economy showed its first signs of recovery – the rise in export and industrial production point to positive prospects for the second half of the year. However, problems in the financial system, which have accumulated over the previous years, have not disappeared. This threatens the sustainability of the economy.