The Holy See seems to work as an intermediary between the European Union and Lukashenka with regard to release of the political prisoners. The nunciature tries...

The Holy See seems to work as an intermediary between the European Union and Lukashenka with regard to release of the political prisoners. The nunciature tries to keep their profile low and refuses to give details of the visits to prisons. The secrecy of those visits may hint at the seriousness of intentions.

On 3 October, Claudio Gugerotti met with the Pope to discuss the latest events in Belarus.

He also met anarchist Pavel Syramalotau and activist of the Conservative Christian Party of the Belarusian Popular Front Syarhei Kavalenka. It is notable that the Belarusian authorities released the latter two after the meeting with the nuncio.

Besides, Belarusian analysts have often expressed the idea that the Catholic Church would have been a perfect intermediary in Belarusian-European relations – an opinion shared by some politicians in the West.

Weakness of the Catholic Church in Belarus

The position of the Catholic Church in Belarus is unstable. On the one hand, the Belarusian Catholic Church effectively develops: builds new churches, organises mass pilgrimages to holy places and religious camps. 12 per cent of Belarusians consider themselves Catholics and every second Belarusian visits church regularly. The Catholic pilgrimage Budslau in Northern Belarus is considered to be the key religious event in Belarus. Christians of all denominations take part in it.

Nonetheless, the official line of the Catholic Church remains the same.

How Lukashenka Made Friends with the Catholic Church

In 2007, relations between the Catholic Church and Lukashenka significantly improved. At that time Pope Benedict XVI appointed Tadeusz Kondrusiewicz as Metropolitan of Minsk and Mahileu. The new Metropolitan soon found understanding with the authorities which made conditions for development of the Catholic Church in Belarus more favourable. However, this development was achieved at the price of loyalty to the Belarusian regime.

In 2009, the Pope officially received Lukashenka in the Vatican after long years of isolation. He was the first in Europe who did so. Naturally, Lukashenka is thankful to the Catholic Church for that. Lukashenka keeps saying at the meetings with the official representatives of the Catholic Church that there is a need for closer cooperation between Belarus, the Holy See and the West.

Last November, Lukashenka said to Kurt Koch, President of the Pontifical Council for Promoting Christian Unity, that he expected “from the Catholic Church and from Pope Benedict XVI personally more integration with regard to defence of our interests, especially in the West”.

This April, Lukashenka mentioned to the current Apostolic Nuncio Claudio Gugerotti that “the Catholic Church’s work on making the relations between Belarus and Western Europe is incomplete”.

It is obvious that Lukashenka really wants to see an influential ally with minimum political ambitions beside him. This ally should also depend on him in some way. The Catholic Church meets these criteria perfectly.

Why Do They Need an Intermediary?

Brussels does not trust Lukashenka anymore. It is clear that the “dialogue 2008-2010” and its sudden interruption cost a lot to European politicians. The European Union does not want to hold direct negotiations with Lukashenka. Back on 26 August 2011 Bulgaria’s Minister for Foreign Affairs Nikolay  Mladenov arrived in Minsk with a mission to talk to Lukashenka. Lukashenka promised he would release all political prisoners soon but failed to keep his promise.

Brussels is tired of “spinning Minsk round”. The European decision-makers built their Belarus policy on the basis of a search for dialogue and compromises which could lead to at least minor political changes. Today Brussels is tired of looking for common points and the new approach is “if Lukashenka wants it, we want it too”.

This is why Lukashenka decided to establish relations with the Apostolic Capital himself. Today, the Catholic Church is a perfect intermediary for Lukashenka. Belarusian analysts think that positive sides of the Apostolic Capital as an intermediary are great experience in negotiations and non-essential political ambitions. However, there’s one more aspect, which no one mentions for some reason – the Catholic Church in Belarus is Lukashenka’s hostage.

Release of Several Political Prisoners Will Happen in the Near Future

It is worth mentioning that Belarus has its own very simple political cycle. If Russia is ready to supply energy resources at low prices to Belarus, Lukashenka will destroy the opposition by any means. If Russia demands that Belarus should pay more for oil and gas, Lukashenka starts slow liberalisation and the Belarusian prisoners of conscience come out of prisons.

Relations between Lukashenka and Putin are getting worse again. The Russian authorities demand that Lukashenka respects his own commitments. In the first place, this concerns privatisation and no more sales of oil products disguised as solvents. Belarus is not obliged to return taxes to the Russian budget when it sells oil products this way.

In such conditions, Belarusian authorities will seek support in the West. Belarus’ foreign minister Uladzimir Makey even had a short meeting with the U.S. Secretary of State Hillary Clinton last week in the United States. Naturally, the former head of the presidential administration had some serious business to discuss with Clinton.

Therefore, the time for Lukashenka to release political prisoners has come. The Belarusian authorities will not do it massively in order not to lose face. However, several political are likely to leave their prison cells soon. 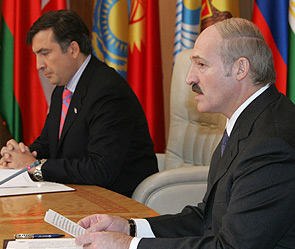 Saakashvili has been an important channel for Belarusian government to communicate with the West. Of course, Lukashenka is known for his ideas of integration with Russia while Saakashvili is a symbol of pro-Western policy in the former Soviet Union. At the first glance any relations between them look improbable.

Their alliance, however, makes perfect sense and tells a lot about Belarusian regime and intricacies of post-Soviet international relations.

After the collapse of the Soviet Union Georgia opted for distancing from post-Soviet integration. For years it has been paralysed by civil strife and separatist conflicts. Belarus in those years maintained goo relations only with Armenia from the whole region. Such line corresponded to the general pro-Russian foreign policy of Belarus at that time.  There was not much what Tbilisi could offer Belarus then.

The CIS department of the Belarusian foreign ministry followed this policy well into 2000s. Reviewing a series of extremely critical reports about Georgian government after 2003 revolution sent to Minsk from the only Belarusian embassy in the Caucasus located in Yerevan, Belarus foreign ministry official in charge of the region rhetorically wrote on the document: “Have the vampires come to power in Georgia?”

Belarusian authorities detained Georgian citizens for alleged helping Belarusian opposition and intimidated the people at the 2006 elections with tales about Georgian terrorists going to destabilise situation in the country. This situation changed in 2007.

It was personal decision of Lukashenka who against advice of his foreign ministry decided to actively develop relations between Belarus and Georgia. Very probably that mediating role to bring two leaders together played a moderately anti-Russian leader of the Ukrain's Orange revolution Viktor Yushchenko. He had surprisingly good relations with the Belarusian ruler and is godfather of the second son of the Georgian leader. Yushchenko was probably also involved in rapprochement of Belarus with Azerbaijan confronting pro-Russian Armenia.

In June 2007, Tbilisi opened its embassy in Minsk. After Russian war against Georgia in summer 2008 Belarusian leadership verbally supported Russia yet effectively helped Georgia. In particular Minsk despite numerous promises did not recognise two break-away regions of Georgia and recommended Belarusians enter separatist regions only through areas controlled by Georgian central government.

Moreover, Belarus did not support Russian-initiated economic blockade of Georgia which was in place since 2006. Lukashenka maintained visa-free regime for Georgian nationals. Belarus actually provided them with an easy channel to visit Russia (which requires visas from Georgians) even at the most tense times in Russian-Georgian relationship.

Georgia Defending Belarus in the West

When the European Union launched the Eastern Partnership, Georgia supported Minsk in the 2010 dispute over who should represent Belarus in its parliamentary forum. Belarus wanted to send the members of its unrecognised parliament to the forum, while the EU invited only the opposition and civil society organisations.

In summer 2010 Minsk was mending fences with the EU and it caused wide-scale confrontation with Kremlin. Then Saakashvili appeared on the Belarusian state TV praising policies of his Belarusian colleague. A major Polish daily Rzeczpospolita even wrote about “Belarus-Georgian Alliance against Moscow.”

Interestingly enough, that did not lead to rise in trade. In mid-2000 trade  between two countries was almost non-existent, yet by 2008 it reached just 45 million and later decreased again. Belarusian analyst Aliaksandr Cixamirau warns in an article for Belapan news agency that “anti-Russian ideological component which brings Belarus and Georgia closer to each other, lowers the quality of bilateral relations and makes cooperation between two countries look opportunistic.”

Tbilisi did not give up its Belarusian ally even after Lukashenka fell out with the West because of the 2010 elections. In April this year, Georgia welcomed release of the leader of radical Belarusian opposition Andrei Sannikau and his colleague Zmicier Bandarenka. Moreover, Tbilisi expressed hope that it would facilitate the renewal of direct dialogue between Belarus and the EU, as well as ensure full-fledged inclusion of the country into Eastern Partnership initiative.

Lukashenka appreciated this help. According to his recent statement: “We are grateful and I said that publicly both to Mikheil Saakashvili and all Georgian politicians which supported us at international forums – in Eastern Partnership, the UN, before Americans and Europeans. Saakashvili at all has been a defender of Belarusian policy, and that is true”.

Belarusian regime is clearly not staunchly anti-Western. It tries to survive, and to that end it avoids becoming a besieged fortress. In this context relations with Georgian leadership – pro-Western and well connected in the West – play a very big part.

Georgian leader was a good communicator, interpreter and messenger of Lukashenka to the West. Lukashenka also had similar relations with Ilham Alieyev of Azerbaijan. Azerbaijan helped Belarus to implement potentially dangerous to Russian interests oil swap with Venezuela and borrowed money when Moscow put pressure on Minsk.

Belarus is not only an Eastern European but also a post-Soviet state. Nations which emancipated from former Russian empire still have a lot of common problems and interests. Among them is the sensitive issue of finding a balance between strengthening national independence and building democracy.

No wonder that Yushchenko and Saakashvili known as democratic revolutionaries in the West find themselves next to the "Europe's last dictator".