Remember reforms and forget about oil – digest of the Belarusian economy

Meanwhile, the economy is still showing signs of recovery, growing three months in a row. This will encourage the government to make...

Meanwhile, the economy is still showing signs of recovery, growing three months in a row. This will encourage the government to make even better economic projections for next year.

However, according to Belstat, Belarus's official statistical body, the real price of this economic miracle continues to come at the cost of simple people – every month, half of all Belarusians bring home less than half the average monthly wage.

On 1 June 2017, Alexander Lukashenka declared that refining had turned from the bulwark of the economy into a loss-making industry (see Figure 1). He admitted that for the most part, inclement external conditions (falling oil prices) were to blame, but he also noted the failure of modernisation. 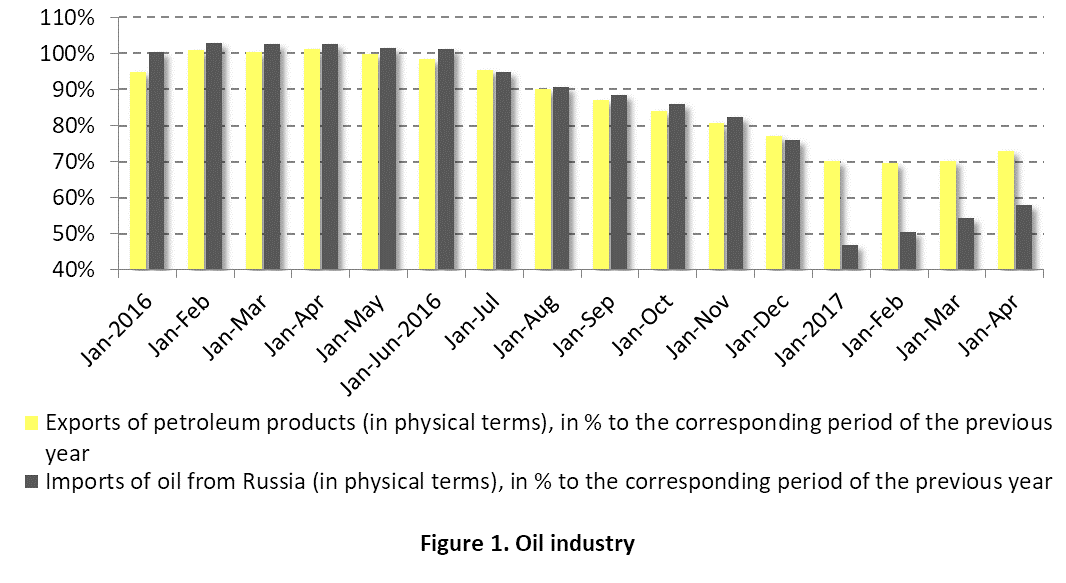 According to the President, the value added by oil refining to Belarus's GDP dropped last year to only half a percent. As a result, the contribution of two Belarusian refineries, Mozyr and Novopolotsk, is now equal to companies such as Beltelecom, a state-owned telecommunication company.

However, any radical change in the management of the oil industry still appears unlikely. Moreover, the authorities are once again planning to invest more money – as much as $1.2bn – to complete the modernisation of the two refinery companies by the end of 2019.

According to a recent statement by Uladzimir Siamashka, Vice Prime Minister of Belarus, this modernisation should allow the the depth of oil refining to increase by up to 90 per cent, turning these companies into 'aerobatics plants' – enterprises able to provide oil processing as deep as the world's best refinery companies and featuring a wider range of petroleum products.

However, these promises remain dubious for several reasons. First of all, Belarus is experiencing a shortage of money for large investment projects. According to the First Deputy Minister of Finance Maxim Ermolovich, approximately 10 per cent of the budget goes to repayment of the state debt (both external and internal).

Second, the country lacks high-level management skills at state-owned enterprises. Finally, Lukashenka has admitted that preparation for the project is not yet complete and points to inappropriate distribution of resources.

In light of this, on 27 June, Alexander Lukashenka announced radical measures for rapid development of the IT sector, which remains the only industry which still possesses competitive advantages.

The GDP did indeed increase by 0.9 per cent during the first half of the year in comparison with the corresponding period of the previous year (see Figure 2). Inflation has stayed at the lowest level in Belarusian economic history – for the five months of the year it reached only 2.7 per cent, less than half of what was predicted. 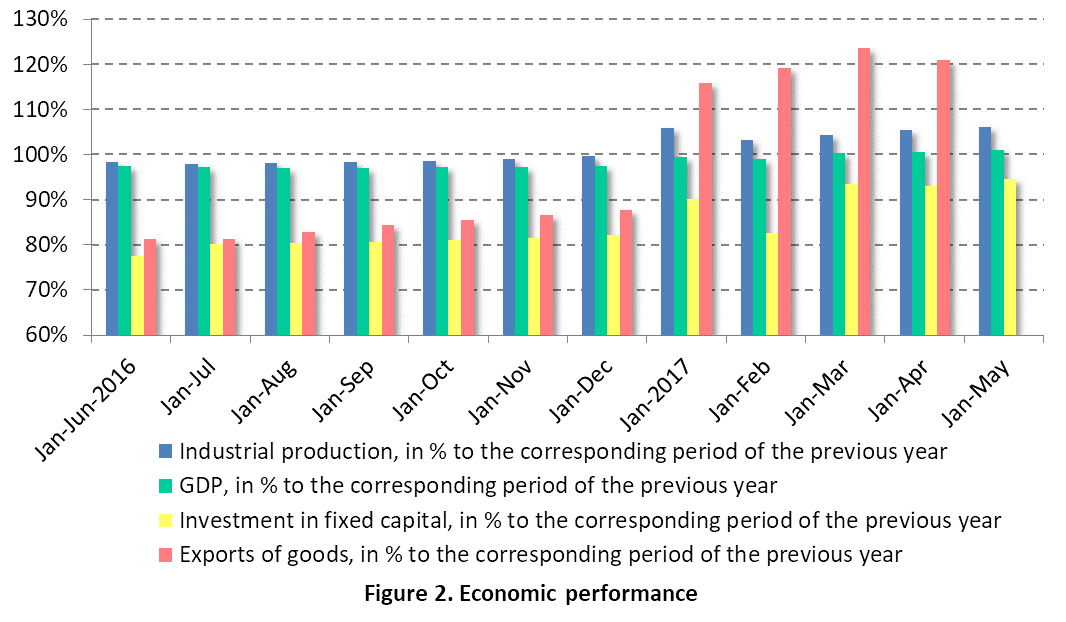 Export in January-April grew by 19.5 per cent. However, according to Vasily Matyushevsky, this was mainly thanks to technological products (motor vehicles, tractors, and machinery), rather than sales of commodities (petroleum products and potash fertilisers).

However, according to economic expert Anton Boltochko, the current positive economic figures reflect only conjunctural growth caused by the low base of the economy, the result of the past two years of recession. With a projected GDP growth of 1.1 per cent in the next year, this looks more like a stagnation scenario, not so much a development plan.

Moreover, even Vasily Matyushevsky reluctantly agrees with this statement. He emphasises the need for structural reforms accompanied by improvements in the institutional environment in order to fulfil the more dynamic target economic scenario.

Meanwhile, it seems that while reforms remain only in the planning stage, directive tools of governance of the economy are once again gaining momentum. This is especially true for the growth of real wages.

According to the Belstat, the average salary in Belarus reached BYN795 ($414) in May 2017. Taking into account growth of consumer prices, the corresponding real wages have increased by 4.1 per cent in comparison with May 2016. However, it is necessary to take into account that the average wage fails to reflect the differences in regions and industries.

In comparison with economic centres (such as Minsk and regional capitals) this problem is exacerbated by the low level of economic activity. Differences between industries add additional pain.

On one side, light industry and agriculture are still largely loss-making, one the other side, telecommunications, logistics, banking, and information technology remain profitable.

Finally, in the public sector the average wage hovers at approximately 77 per cent of the country average. As a result, according to data revealed by Belstat on 29 June 2017, every second Belarusian has less than BYN370 ($192).

Given such low growth rates for wages and the significant differentiation across regions and sectors, it would take a miracle to fulfil the authorities' goal of achieving an average wage of BYN1,000 or $520 (growth by 26 per cent) by the end of this year using standard market methods.

Thus, taking all this together, the authorities may attempt to use directive (administrative) methods in order to ensure the growth of industrial production and wages. However, manual control over Belarusian companies may result in a chronically dire economic scenario: increased inflation and an economy threatened by financial instability.

Problems and prospects for the Belarusian IT industry 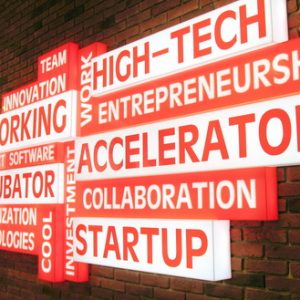 On 7 June 2017, the Microsoft Corporation held a Government Industry Day at Belarus’s Hi-Tech Park with the participation of both Belarusian ministers and Microsoft experts. The seminar addressed issues surrounding the digital transformation of the economy and aimed to present technologies that could work for the finance, transport, health, education, and other economic sectors to the Belarusian authorities.

IT has become the fastest-growing sector in the Belarusian economy, increasing by over 20% annually. However, the nature of the industry in Belarus, which focuses on outsourcing, primarily targets foreign customers. This is partially due to the reluctance of the Belarusian state to embrace tech achievements at home.

Given the limited growth potential of outsourcing, Belarusian IT needs to shift from software services to production, as well as increase local consumption. These processes require economic liberalisation – including venture legislation and favourable investment conditions – larger number of specialists, and modernised national tech management.

The prevalence of the outsourcing model

However, outsourcing may soon reach its apex, given Belarus’s limited human resources and the world’s spending on outsourcing. The outsourcing-dependent IT sector sells ‘brains’, thus letting most income go abroad; it may also become less economically attractive after HTP tax exemptions terminate in 2020. 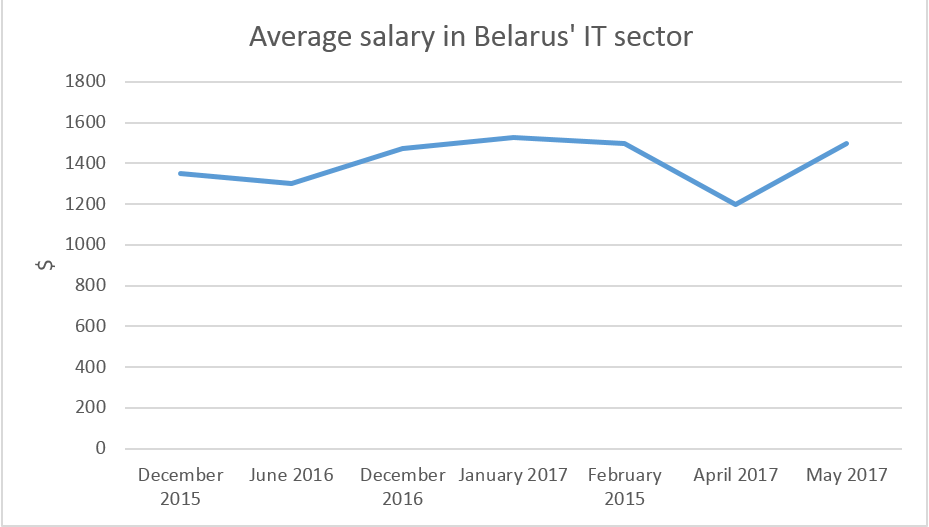 On the other hand, the presence of global outsourcing companies fosters the development of Belarusian IT infrastructure, thus increasing the productivity and stability of the IT sector and reducing risks and costs. It also sustains a labour market with a number of wealthy and skilled professionals who receive wages significantly higher than the average.

What’s more, many outsourcing companies are now moving beyond software services. For instance, EPAM Systems, owned by Belarusian businessman Arkadź Dobkin, has expanded its focus to product development in such areas as medicine, media, and banking.

At the moment, out of a total of over a 1,000 IT companies operating in Belarus, only 10-15 per cent create their own products. Nevertheless, product software remains the most promising direction, as ready-made projects earn more than services. In particular, Belarus will benefit from companies that create machine learning and artificial intelligence products – fields which will dominate the tech industry in the near future. 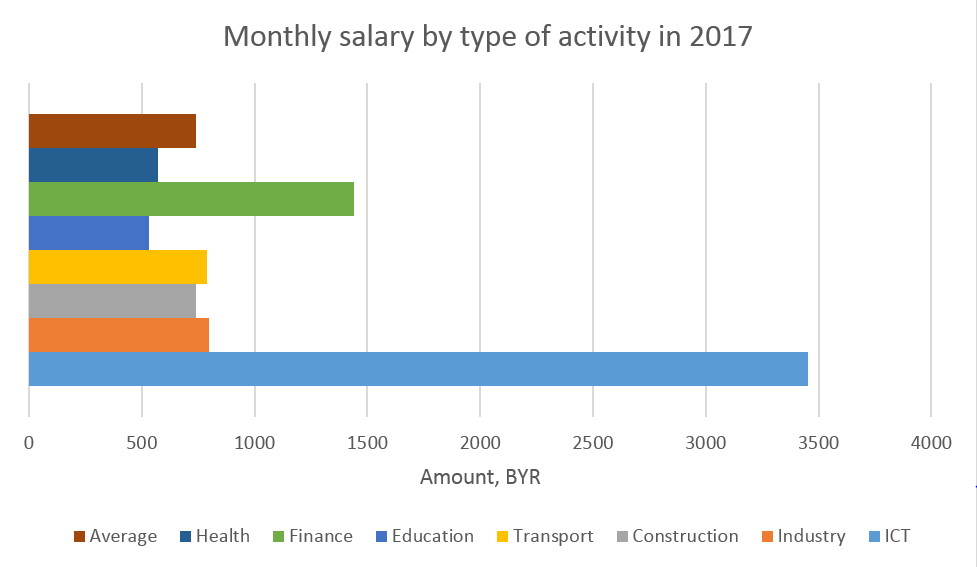 Nonetheless, Wargaming recently opened a mobile division in an attempt to reorient its functioning. Other Belarusian startups also remain active and receive foreign investment. This year, the mobility company Gett acquired the Belarusian-Israeli startup Juno, while the public company Globant acquired PointSource. Other promising startups include DroneX, which develops custom-made Unmanned Aerial Vehicles, Blinger – an app that allows communication via multiple platforms, the trip-planner Eightdays.me, and an emotion recognition app called NeoSound. These projects have already been noticed internationally and have high chances of becoming successful.

In a recent interview, Ivan Michnievič, a co-founder of Wargaming who left the company in 2014, described the state policy towards business as ‘short-sighted’. Belarus barely invests in IT and has complex legislation for the IT business. State investments in R&D have been declining since 2011, never exceeding 1 per cent of GDP. This consequently reduces Belarus’s ability to retain regional leadership in the current technology race. 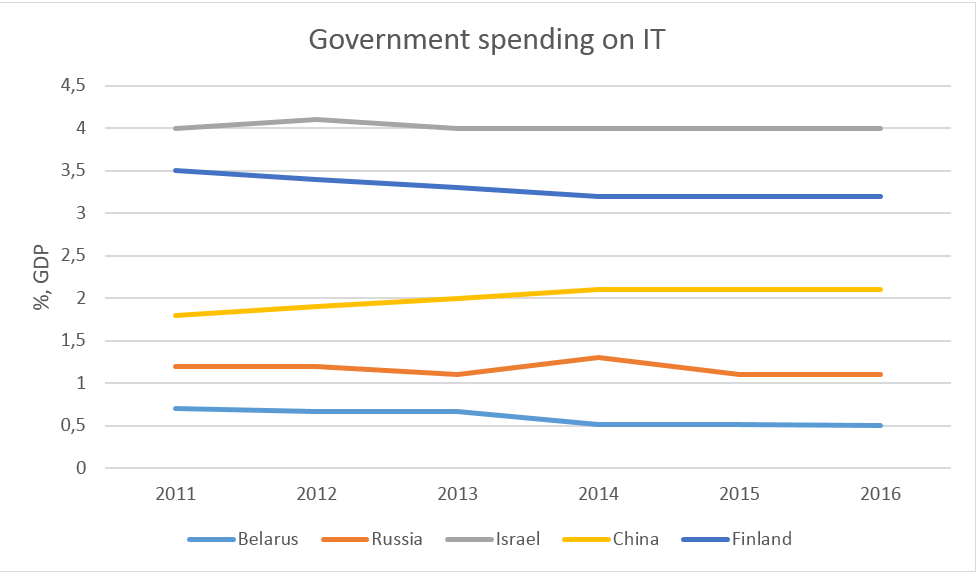 During the conference IT Spring 2017, various speakers discussed investment problems in Belarus. Not only do specifics of legislation prohibit venture funds, they also fail to protect the investor. Belarusian law neither secures investor’s property rights nor protects him or her from employees transitioning to competitors.

What’s more, occasional arrests and administrative punishments of shareholders and managers for violations of economic and bureaucratic procedures frighten off potential investors. The government, which is incapable of scraping together national funds to support IT, should at least allow venture funds and amend legislation to attract more investment.

Lastly, the reason why Belarus lacks many major corporations is the country’s image. In order to attract companies like Microsoft or Facebook, Belarus should cultivate a positive image in foreign media; this requires political will rather than large amounts of money.

Domestic IT consumption and social division

Lack of domestic consumption remains a challenge for the Belarusian IT industry. State companies which have their own tech specialists remain unwilling to move on to a new type of technology management. Beside being insufficiently informed about the opportunities offered by the IT industry, officials have no real interest in the tech-supported success of state-owned businesses.

Arkadź Dobkin expressed his readiness to work in Belarus provided that the customer has a sincere interest in the result and ‘wants to be your real partner, and not a boss on a high chair’. If Belarusian manufacturing and agricultural giants make better use of Belarusian IT services, this will eventually benefit both sides, improving the country’s economy overall.

Moreover, Belarus should address IT education, as the current level of IT training does not meet requirements. To increase its supply of professionals, Belarus could attract specialists from neighbouring countries by offering special visas or residence permits, reducing payroll tax, or providing other benefits.

On the other hand, the state must maintain a balance in the way it treats the IT sector. At the moment, IT specialists receive significantly larger salaries with many tax benefits; these are unavailable to the rest of the working population. Excessive attention to IT could contribute to the creation of a distinct labour elite, which brings inequality and division to society. The authorities should pay more attention to other spheres, such as education or health, regardless of the profit they bring.

Thus, provided the state implements legislative changes, the ICT sector will grow faster, bringing more companies, revenue, and technological advancement to Belarus. However, in order for ICT not to become overly exclusive and divisive, the sector should work out a way to directly benefit the Belarusian economy and society.

This article is a part of a series of publications on IT sector in Belarus supported by VP Capital.