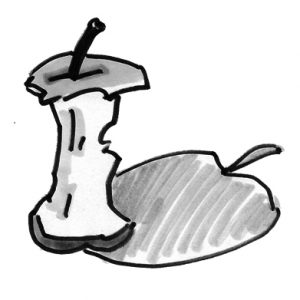 Yet the 2015 edition of the Social Progress Index, released today, places Belarus 66th out of 133 states on social progress. According to the Index, Belarus meets basic human needs but fails to create the conditions for its citizens to lead healthy and fulfilling lives.

The country lags behind Ukraine, Armenia, and Georgia, as well as dozens of other states on social progress, largely due to weak personal rights and the poor health of its citizens. Belarus Digest discussed what the rankings mean for Belarus and other post-Soviet states with Michael Green, founder of the Social Progress Imperative, a non-profit that produces the Index.

Belarus No Longer Leads in the Post-Soviet Region

Results of the 2015 Social Progress Index, however, place Belarus between Botswana (65th) and Tunisia (67th) and behind Ukraine and Moldova. The Index is based on 52 indicators for 133 countries and draws on original research as well as data from the World Bank, the World Health Organisation, and other respectable international organisations.

Taken together the indicators reflect social progress as “the capacity of a society to meet the basic human needs of its citizens, establish the building blocks that allow citizens and communities to enhance and sustain the quality of their lives, and create the conditions for all individuals to reach their full potential.” 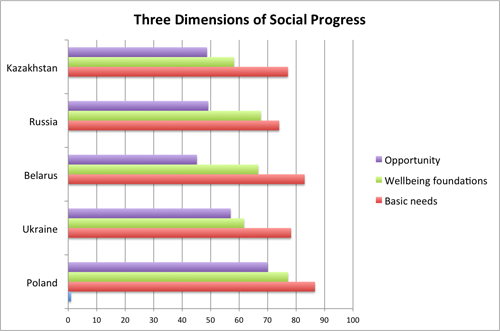 The absence of GDP from its formula distinguishes this ranking from similar rankings. On the other hand, it includes personal rights, and tolerance. Both explain why Belarus no longer leads in the post-Soviet space.

“The rights of individuals to live their lives the way they want to seemed to us intrinsic to what it means to be a good society,” explained Michael Green, executive director of the Social Progress Imperative, in an interview to Belarus Digest. Green said development experts often “shun” rights and freedoms as “too political to create a global consensus on.”

Even though Belarusians have traditionally looked up to the EU and higher-income states, even comparisons with states in a similar income bracket are far from flattering.

Compared to 15 states with similar GDP per capita (ranging from Lebanon and Mexico to Botswana and Montenegro) on social progress, Belarus ranks 11th out of 15.

Belarus’s chief strength relative to these states remains access to advanced education – a legacy of the Soviet Union rather than Minsk’s independent achievement. The country’s relative weaknesses, on the other hand, are health and wellness, as well as personal rights. 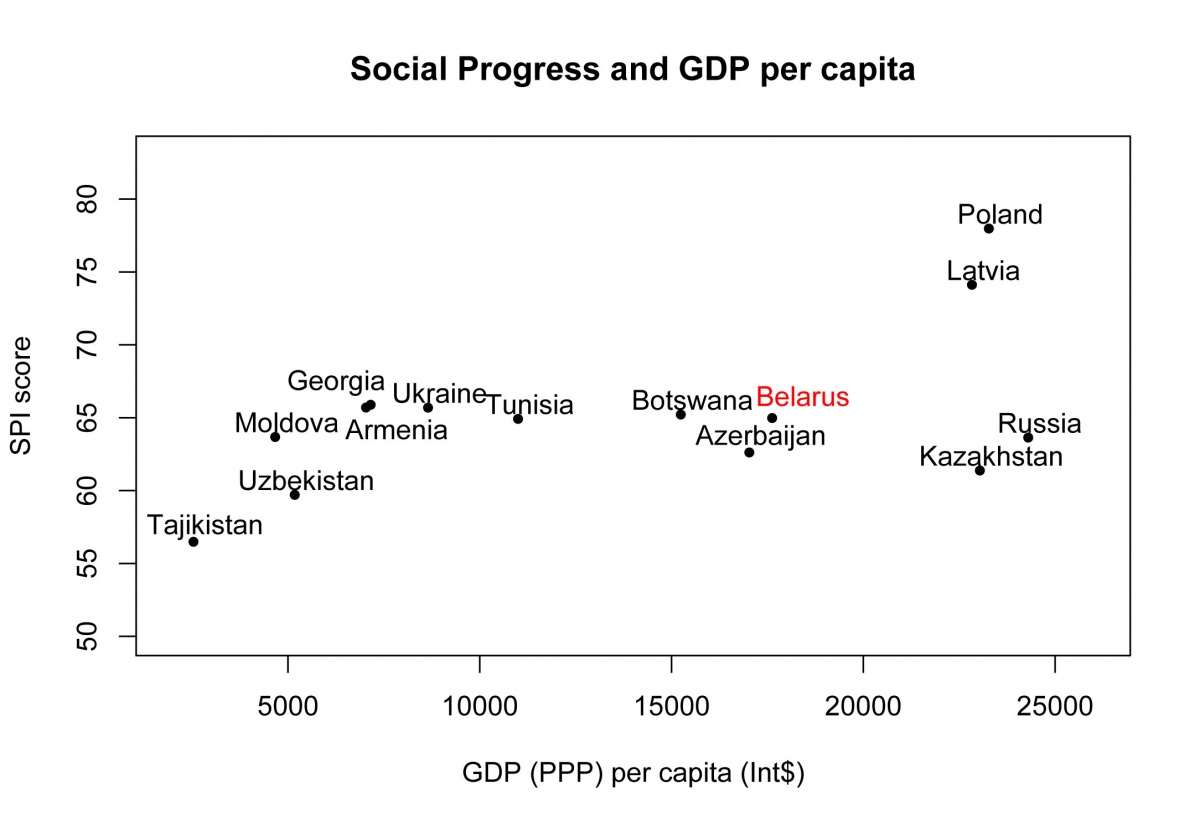 On health and wellness Belarus ranks very low – 130th out of 133 countries, even though Minsk takes pride in the accessibility and low costs of healthcare.

Michael Green emphasises that all post-Soviet states “really struggle on health and wellness” issues despite “varied geographies” due to the combination of environmental factors, lifestyle, and pollution.

On personal rights, Belarus ranks 125th out of 133 countries. The score reflects political rights, the freedom of speech, the freedom of assembly, the freedom of movement, and private property rights. Belarus performs poorly on all of these dimensions even when compared to the fifteen states listed above.

Will Belarus Meet the Needs of its Citizens Better in the Future?

Ukraine outperforms Belarus in the 2015 Index because much of the statistics used to calculate it were collected before the outbreak of the war. Thus, Belarus’s ranking may improve relative to its post-Soviet neighbour in the next edition of the Social Progress index.

Commenting on Belarus’s relative strengths based on the Index, Michael Green cautions: “It doesn’t necessarily mean that Belarus does well, it just means that everyone else sucks. There shouldn’t be any comfort taken.” 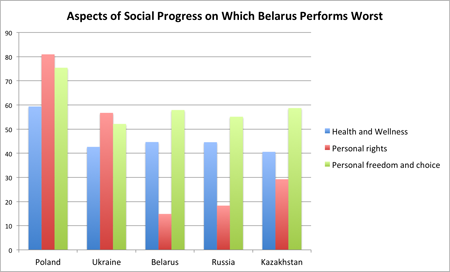 As is typical of composite indices, some components of the Social Progress Index seem rather arbitrary. For example, the Access to Information and Communications combines cellphone subscriptions, in which Belarus leads; the press freedom Index, in which Belarus trails behind 118 other states included in the Index; and the share of Internet users. Additionally, the large number of indicators used to compute the Social Progress scores (52) makes their magnitude challenging to interpret.

At the same time, the Index does uncover some of the most glaring shortcomings of the Belarusian “social state” – poor public health and weak personal rights. The Belarusian government rarely acknowledges either of these factors and still claims that the Belarusian state exists “for the common people.” In reality, the state meets only the very basic human needs, a low bar to strive for.

With the crisis in Ukraine on their minds, Belarusians do not seem to mind. When asked what the most important problems facing Belarus are, only 22% of respondents in the March 2015 IISEPS survey expressed concern about the violation of human rights. Four times as many (84%) mentioned rising prices.

Basic human needs are what worries Belarusians most today. Even by its own limited definition of the social state – without personal rights and freedom of choice – the government in Minsk is failing to deliver. 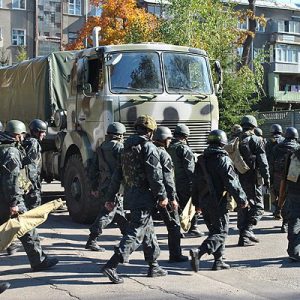 On Tuesday, a provocative article appeared in the pro-Kremlin Russian daily, Vzglyad. It demanded that Belarus hold a referendum on becoming a part of Russia or else face Ukraine’s fate.

The article referred to Alyaksandr Lukashenka’s recent interview with Bloomberg, in which he once more cautiously expressed his sympathy for Kyiv and criticised the annexation of Crimea.

Moscow knows these are not just words. Minsk has avoided using the strategic means at its disposal – like its control of the Ukrainian oil products market – to destabilise the neighbouring country. Instead, it has enhanced economic cooperation with Kyiv and even sold military equipment to Ukraine.

Belarus has been consistent in supporting Ukraine since the Crimea crisis. In March 2014, Minsk could have made the life of Kyiv’s new leadership much harder by demanding advance payments for oil products. Because Belarusian firms control about 60% of the oil goods market in Ukraine, this step would have further weakened Kyiv’s bankrupt government. Instead, the Belarusian side increased the supply of oil products and offered delayed payments to its neighbour.

In January 2015, the Belarusian ambassador to Kyiv Valiantsin Vyalichka announced that Belarusian firms would conduct transactions in the Ukrainian national currency. Even though this decision facilitated better bilateral trade between the two countries, it entailed political and economic risks for Belarus. Minsk risked retaliation by the Kremlin, on the one hand, and financial losses due to the unstable exchange rate of the Ukrainian hryvna, on the other.

Belarusian-Ukrainian trade in military or dual-use goods further proves that Minsk has not succumbed to Moscow’s pressure. As the crisis in Ukraine unfolded, the media reported that Belarus increased contact with Ukrainian defence firms, discussed joint ventures as well as the transfer of new technologies.

Less known is the growth in the deliveries of Belarusian military-relevant equipment, spare parts, and weapons components to Ukraine. According to Ihor Tyshkevich of Ukrainian Hvylya.net, the official bilateral trade statistics demonstrates a significant increase in “unspecified” Belarusian exports of an apparent military character. The military components of exports are usually hidden in official statistics under the category of “other.”

While the volume of military-relevant exports remains modest, these transfers may have played an important role in boosting Ukraine’s defence by satisfying very specific needs of the Ukrainian army. For example, one of the problems Kyiv faced last year was a lack of engines and batteries for its armoured vehicles. Tyshkevich analysed official statistics and found out that the export of “other” engines from Belarus to Ukraine increased from $1.1m in 2013 to $1.67m in 2014. The export of spare parts for “other” engines has increased twofold, reaching $2.84m in trade.

Since the beginning of the war in Eastern Ukraine, Belarus has been supplying Ukraine with vehicle batteries. In 2013 Ukraine did not import any of these batteries from Belarus. In the second half of 2014, Minsk exported $125,000 worth of them. In 2014, Belarus also sold $2.19m worth of electrical engines, which can be used in tank turrets. It’s an impressive rate of growth when compared to the previous year, in which only $16,000 worth of electrical engines were sold, writes Hlylya.net.

Minsk has also supplied Kyiv with optical and electronic devices, one of the specialisations of the Belarusian defence industry. According to official statistics quoted by Tyshkevich, last year Belarus delivered $1.7m (in 2013 – $184,000) worth of binoculars, the best night vision monoculars and thermographic cameras to Ukraine, gun sights to the tune of around $1m, as well as range finders, monitors and other optic and electronic components for military equipment valued at over $1.1m.

Belarusian exports also included some ready-to-use military equipment. There are indications that Kyiv bought Minsk Wheel Tractor Plant (MZKT) chassis for its missile and artillery systems. Despite the slowdown in the Russian market and the corresponding decline in Russian military purchases from MZKT, the plant has managed to earn more money in July-September 2014 than in the entire previous year – at least partly due to the growth in exports to Ukraine.

The Minsk Truck Plant’s (MAZ) sales to the Ukrainian armed forces are openly publicised. In July 2014, Ukraine’s Internal Affairs Minister Arsen Avakov revealed that the Ukrainian National Guard had placed orders for trucks and trailers from Belarus, and the media reported on a delivery of 44 new MAZ trucks. In October 2014, the National Guard reportedly bought 27 more MAZ trucks and several dozen trailers from Minsk.

Even more strategically important was Belarus-Ukraine cooperation in the field of aviation. The Belarusian 558th Baranavichy aircraft repair factory may have been speaking about Ukraine when it announced a $66m overhauling of MiG-29s for a “foreign customer.” The announcement coincided with the Ukrainian army receiving several overhauled MiG-29s in December 2014 and January 2015. The Moscow-based Nezavisimaya Gazeta commented that the Belarusians may have been behind the restoration of the Ukrainian aircraft.

Minsk has also dramatically increased exports of “flying vehicles” and parts for them, which likely includes drones, to Ukraine. If in 2013, Belarus’s respective exports amounted to $12,000, in 2014, Minsk earned more than $5m, while in January-March 2015 – almost $4m, reports Hvylya.net.

Much for Belarus but too Little for Ukraine?

The full scale of these deliveries remains unknown. Recently, however, the head of the Belarusian Military Industrial Committee Siarhei Hurulyou commented on the rapid growth of defence exports. According to him, the national defence industry has earned more than $800m through exports last year. Undoubtedly, a portion of these military and dual-use exports went to Ukraine.

While Belarus can hardly rearm Ukraine, Minsk seems to be helping as much as it can. Belarus clearly wants to maintain good ties with Kyiv and hopes to help Ukraine survive as a state. In doing so, Belarus risks enraging the Kremlin, who can easily retaliate against the Belarusian leadership.

Such policies prove that the noisy battles of rhetoric between Minsk and Moscow are not all just words. Belarus also pursues its own policies, even as it pays attention to Russia’s own sensitivities and is treading carefully. Minsk is clearly willing to sabotage and resist the Kremlin’s regional ambitions, so long as they do not suit them.