Belarus and Lithuania connected by bicycle paths. Third Kastryčnicky Economic Forum launches preparations for an event in Minsk. Belarusian authorities launch a principle of a "single window" for all international technical assistance projects. 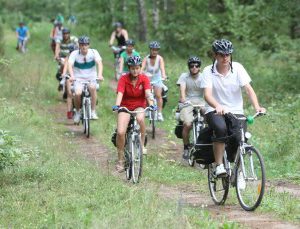 Belarus and Lithuania connected by bicycle paths. Third Kastryčnicky Economic Forum launches preparations for an event in Minsk. Belarusian authorities launch a principle of a "single window" for all international technical assistance projects.

Communal services reform is coming. A group of expert panellists hold a discussion titled “Does the Belarusian Government Needs NGOs.

Belarus and Lithuania connected by bicycle paths and water routes. Thanks to an EU-funded cross-border cooperation project "Ecological Transport Uniting Neighbours", a new bicycle "Path of Health" in the Pyshki Forest Park has been opened in Hrodna, Belarus. In addition, a new facility for active leisure lovers with sheds for cooking meals, campfires, and garbage containers was opened to the public along the coastal line of the river Neman, where one can stop when kayaking.

SuperHeroes school realises a series of new bike projects. New parking places, bikequest and bike meeting at Uruchcha were held by participants of the team of first school of SuperHeroes. In collaboration with help of company Nitur, activists have built a new parking place and hold an informal meeting with bicyclists of the Uruchcha district altogether with Falanster representatives. Seven projects of SuperHeroes Summer School are to be realized till October.

Office for European Expertise and Communication and British Embassy announce a series of partnership making meetings. Meetings will take place during 2015-2016 years and are opened for civil society organisations working on regional and rural areas and local communities' activists for further professional development. The deadline for applications is 20 August.​

Third Kastryčnicky Economic Forum launches preparations. The KEF-2015 conference “Economy of Belarus: At a Tipping Point” will take place on 3-4 November in Minsk. Kastryčnicky/October Economic Forum aims at bringing various stakeholders together to discuss the reform plans of the government, and contribute to building consensus and trust towards a structural reform agenda. The conference is organized by IPM Research Centre together with BEROC and CASE Belarus. Partners are USAID, Pact and the Association of European Business.

EuroBelarus invited cultural activists for a seminar. The EuroBelarus Consortium conducted a seminar for leaders and activists or cultural organisations to attend a seminar “Culture as a tool of social transformation: innovation and unused potential”. The seminar took place on 14-16 August outside of Minsk, and offered master classes and expert discussions on such issues as demanded and sensitive issues of Belarusian society, the role of culture in social transformation and others.

Belarus launches a principle of a "single window" for all international technical assistance projects (ITA). The Ministry of Economy will carry out the procedure of approval and registration of ITA projects. To coordinate raising and using ITA, Coordinating Council is being establishing with participation of representatives of Belarus, international organisations and foreign countries. By its 21 July decision the Council of Ministers has approved three international technical assistance projects, including Mobility Scheme for Target Interpersonal Contacts (MOST), Institutional Development and Support of Upgrade Policy of Component Producers for the Automobile Sector in the Republic of Belarus, Education Reform Through International Knowledge Exchange.

18th Edition of CSO Sustainability Index for Belarus is presented as a round-table. NGO “ACT” and a group of expert panellists hold the discussion titled “Does the Belarusian Government Needs NGOs?”. The event gathered around 40 guests, including international organizations and representatives of three ministries. The program included presentation of the CSOSI as well as presentations of SOS-Kinderdorf; NGO “Positive Movement” and sectoral analyses by Office for European Expertise and Communications.

Court dismissed the administrative case against Ihar Barysau, editor-in-chief of the Naš Mahilioŭ independent newspaper, due to expiration of the two-month period for the imposition of an administrative penalty. The journalist was charged when visiting the police department on 13 July where he had come to take back the computers seized from him on charges of defaming the manager of the Stužka state-owned enterprise. 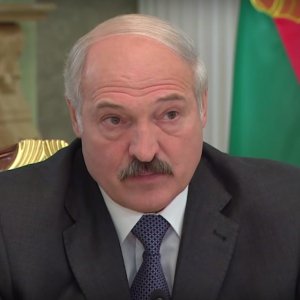 On 4 August, Belarusian president Aliaksandr Lukashenka met with journalists of non-government media to discuss a wide range of topics. In particular he focused on the preelection campaign and the conflict in Ukraine, stressing that Russia will not go to war with Belarus and no Russian planes operate on Belarusian territory.

This paper examines two aspects of the president’s policies: responses to events in Ukraine and his position on the economic downturn. It posits that the links between the two events form a pivotal part of his platform and that he exploits the ramifications of the conflict to explain and trivialise the fall in living standards.

Belarusian president faces two overriding concerns during the approach to the new presidential election campaign: the conflict in Ukraine and the economic downturn in the country. Opposition candidates could highlight both issues in their platforms. Registration of candidates starts only after 21 August, but already the president’s speeches concentrate on the impact of the war on Belarus and the need to avoid any form of commitment.

The Fear of War

Lukashenka uses the events in Ukraine as a negative example, periodically frightening Belarusian residents with the theory that the Maidan civil uprising represents the equivalent of a protest in “the square” (signifying October or Independence Square, the location of previous demonstrations after elections) and could lead to war.

On this question, the president declared in the interview that he opposes any conflict in Ukraine, Russian or otherwise. He reiterated that no attack on Ukraine will come from Belarus and has informed Ukrainian Parliamentary Speaker Oleksander Turchynov of the same on 4 August.

Still, according to surveys conducted by Andrei Vardomatsky in July 2015, 62.3% of Belarusians do not consider Russia responsible for the bloodshed in Ukraine and 63% support Russia’s position on Crimea. In a recent paper, Anton Shymanski notes that most residents of Belarus receive information from TV channels whose policies are formed mainly by the Kremlin. Virtual space in Belarus is simply part of Russian space.

The perceptions of the Ukrainian leadership disseminated in Russia (neo-Nazis, Banderites, etc) enjoy widespread backing in Belarus. Thus Lukashenka faces a complex situation: he cannot remain strictly neutral with an electorate largely committed to the Russian side and believing Ukraine to be the embodiment of chaos.

On the other hand, as sociologist Aleh Manayeu of the National Institute for Social-Economic and Political Studies (IISEPS) has observed, the hierarchy of critical issues for Belarusians has changed, and in place of the former social-economic problems come problems of security and protection.

Thus Lukashenka offers reassuring platitudes that no one can forget the “30 million losses” in the Second World War, and that eventually the Donbas will return to the Ukrainian fold. In the meantime, Belarusians enjoy security under his protection and avoid participation in the conflict.

Despite the switch in priorities, the economic downturn persists, particularly in terms of wages and purchasing power. Gone is the past “social contract” with citizens and promises—as in 2010—of a monthly wage of $1,000 per month. That figure has now fallen to $500, and instead the president talks about job security and protection from the conflict to the south.

His own role is that of a stern overseer, warning the managers of enterprises that he will regard a failure to support economic goals as an act of sabotage and use Special Services to ensure cooperation. They must maintain jobs and labour collectives, sell what they produce, and wait out the crisis.

His language on the economy uses military metaphors . On 6 August, he commented during a meeting with Prime Ministr Kabiakou that “The economy is in a state of war,” “we have entered an economic war, a military situation.” Yet people do not anticipate something “supernatural.” They understand that 80% of the problems originate outside Belarus, and “therefore we are not to blame.”

The country in the meantime must seek alternative markets and resolve most of its problems in the course of 2015. Thus official policy is one of evasion: we did not cause the economic decline and thus eventually will return to past practices. Manayeu describes public thinking as follows: “If we are living better under Lukashenka, it means that it is thanks to Lukashenka.” And if not, the fault lies elsewhere.

The Popularity of Lukashenka

Opinion polls conducted by the National Institute for Social-Economic and Political Studies (NISEPI), Vardomatsky (Belarusian Analytical Workroom), and others indicate that the popularity of the president is currently falling, though it stands at around 40% of respondents, falling from 45% earlier. Though perhaps a concern, it is far from the historic lows during his 21-year presidency. According to NISEPI, these were 26.5% in 2002 and 20.5% in 2011, when the world recession reached its peak in Belarus. Thus Lukashenka does not yet face serious danger.

Yet his sources of support appear to be narrower than in the past, when he relied on “simple” country people and urban workers. Small and middle entrepreneurs hold different views on economic progress. They make up, together with their families about 1 million people, or roughly one quarter of the electorate. Lukashenka continues to rely on the support of state officials, the KGB, and the army, none of which have any serious economic input into the development of society.

Open rifts have emerged between certain sectors. Those who want economic reforms and private businesses, clash with state bureaucrats content to remain under an “administrative-command” system. The official stance is retrogressive: one opposed to change, mild adherence to Russian-lead structures, and open to foreign loans from Russia, China, and other partners.

Yet weariness with Lukashenka and concern about problems do not offset Lukashenka's advantages: the protracted conflict in Ukraine and the fear Belarusians have of becoming embroiled.

Ironically his activities as a peacemaker, which produced praise from the West, are not particularly helpful to his campaign, irritating the Kremlin and lacking support of the population, which largely accepts the Russian perspective of events.

The watchword remains stability, the suggested course the same as in the past; the grim alternative depicted as a replica of the mayhem taking place in Ukraine.