The 4th Annual Dutch-Belarusian-Polish Conference: Education as a Human Right

On 13 December 2016 Minsk will host the 4th Annual Dutch-Belarusian-Polish Conference. The year the topic is 'Education as a Human Right: Modernising Higher Education to Meet the Challenges of the 21st Century'. 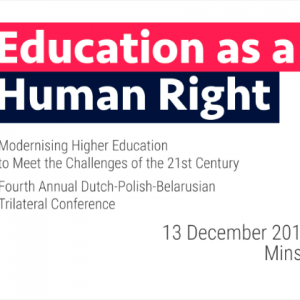 On 13 December 2016 Minsk will host the 4th Annual Dutch-Belarusian-Polish Conference. The year the topic is 'Education as a Human Right: Modernising Higher Education to Meet the Challenges of the 21st Century'.

Article 26 of the Universal Declaration of Human Rights states that everyone has the right to education, which shall be directed to the full development of the human personality and to the strengthening of respect for human rights and fundamental freedoms.

Improving higher education will be the main focus of the discussion-oriented conference. It will give experts from Belarus, the Netherlands, and Poland an opportunity to discuss what each country can learn from others.

As with other conferences co-organised by the Ostrogorski Centre, it will bring together people with different views and backgrounds to engage in respectful dialogue. The speakers will include representatives of educational institutions from the Netherlands, Poland, and Belarus, as well as Belarusian government agencies and NGOs.

For each topic, the Ostrogorski Centre will prepare a short working paper to focus discussion on real practise. Belarus Digest, Ostro.by, and Ideaby.org will also provide a live broadcast of the event as well as archived videos following the conference.

The conference will focus on three key topics: the challenges of Belarus accession to the European Higher Education Area, improving business education, and making education more accessible through distance education.

Belarus occupies a relatively high position on the Human Development Index compared to other CIS countries; about 90% of the population possesses secondary or higher education. According to the Legatum Prosperity Index 2016, Belarus surpasses Russia, Ukraine, Lithuania, and certain EU countries with regard to access to education, quality of education, and the human potential.

However, Belarus still needs to do more to integrate into pan-European education structures, as it is one of the last countries in the region to join the Bologna process. Its accession has been viewed as an opportunity for authorities to improve the situation.

At a conference of 47 EHEA ministers of education in 2015, Belarus committed to a roadmap for higher education reform as a prerequisite for joining the EHEA. The roadmap envisages modernisation of the professional qualifications framework, thus making it compatible with the European framework by introducing a three-cycle system of higher education.

Belarus has a long way to go to meet all the requirements of the EHEA. For example, students and staff face barriers to international mobility. Students and academics need to undergo lengthy procedures to be 'officially' allowed to attend education events abroad, although in many instances these requirements are not strictly enforced.

Advertisement for activities of foreign universities is strictly regulated by the anti-human trafficking law, developed by the Ministry of Internal Affairs. Self-governance and student organisations at universities face significant restrictions.

The Belarusian authorities have shown interest in the development of business education, as proved by the adoption of the corresponding Concept by the Belarusian government in 2015. Business education can help lift people out of poverty and improve their situation. However, the sector remains probably the most sensitive to the economic climate, which lately has not been ideal in Belarus. In neighbouring Poland and Russia, business education boomed in the early 1990s as the private sector grew.

In Belarus, much of the economy is still state-owned and most Belarusian business educators lack wealthy clients. They often look more like training centres oriented towards small business than fully-fledged education institutions.

These days, those seeking business education opportunities are demanding that training leads to practical skills. The business education sector in Belarus suffers from excessive state regulation, poor integration into the international educational space, and weak representation of business educators in the regions.

Despite the wide penetration of high speed Internet in Belarus and the significant number of higher education institutions in the country, distance education in Belarus is very underdeveloped. Its expansion in Belarus would offer new opportunities to people with disabilities, people who live far from urban centres, or people who work full-time to obtain education. A flexible schedule and the ability to create an individual distance learning plan would allow students to combine education and work.

Cooperation with more experienced distance educators could create opportunities to provide distance education to entrepreneurs. Training on specific skills required on the labour market, along with creation of Belarus-focused massive open online courses (MOOCs), could also be provided.

These and other topics will be discussed in more detail in Minsk on 13 December at the 4th Annual Dutch-Belarusian-Polish Conference: 'Education as a Human Right: Modernising Higher Education to Meet the Challenges of the 21st Century'. 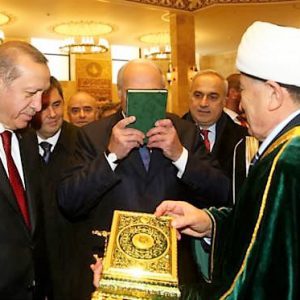 The Slovakian Prime Minister's visit to Minsk ended a six-year long hiatus in bilateral visits of European leaders to Minsk. Alexander Lukashenka now seems to be more comfortable meeting with European emissaries than with Vladimir Putin.

Negotiations with leaders from ‘Distant Arc’ countries focused on trade and investment but also had geopolitical significance. Belarus is seeking to avoid being caught in a tug of war between Europe and Russia. 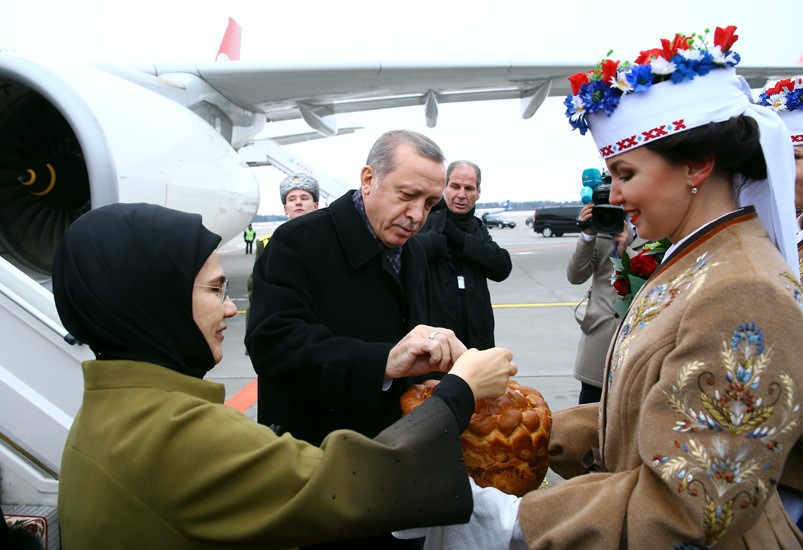 Erdoğan was expected in Minsk on 29 July. However, he had to postpone his visit after the fail coup attempt in Turkey. The two countries had been preparing for the meeting even amidst the crisis in relations between Turkey and Russia, Belarus’s closest ally.

Both presidents are aiming for a $1bn turnover. However, this figure would be hard to achieve. The current growth trend may be explained by Turkey’s recent attempts to circumvent Russian sanctions – but this may not be permanent.

Belarus has provided Erdoğan with a convenient example of a European ‘illiberal democracy’. Both leaders share a preference for strong presidential power and use of the death penalty. This may facilitate cooperation between the two authoritarian leaders.

On 28-29 November, Lukashenka visited Azerbaijan to meet with his counterpart Ilham Aliyev and the country’s Prime Minister Artur Rasizade. The two countries stick to a regular schedule of high-level meetings focusing on trade and investment. 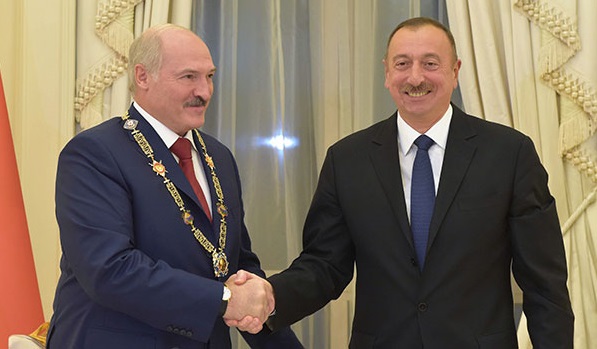 Despite close contacts, bilateral trade has remained low in recent years, dropping by two thirds in 2015. Lukashenka has traditionally pitched Belarusian tractors and trucks as well as military equipment.

This year, for the first time, the countries agreed to cooperate in the energy sector. Belarus recently bought 84.7 thousand tonnes of oil from Azerbaijan, likely as a political gesture to show that Belarus is exploring alternative sources of oil supply. Speaking to journalists, Ilham Aliyev sounded uncertain as to the long-term nature and sustainability of these operations.

In Minsk, the Slovakian official held talks with his Belarusian counterpart Andrei Kobyakov and met with Alexander Lukashenka. Fico and Kobyakov signed a joined communiqué emphasising cooperation in tyre manufacturing, energy, and the automotive, food, and pharmaceutical industries. 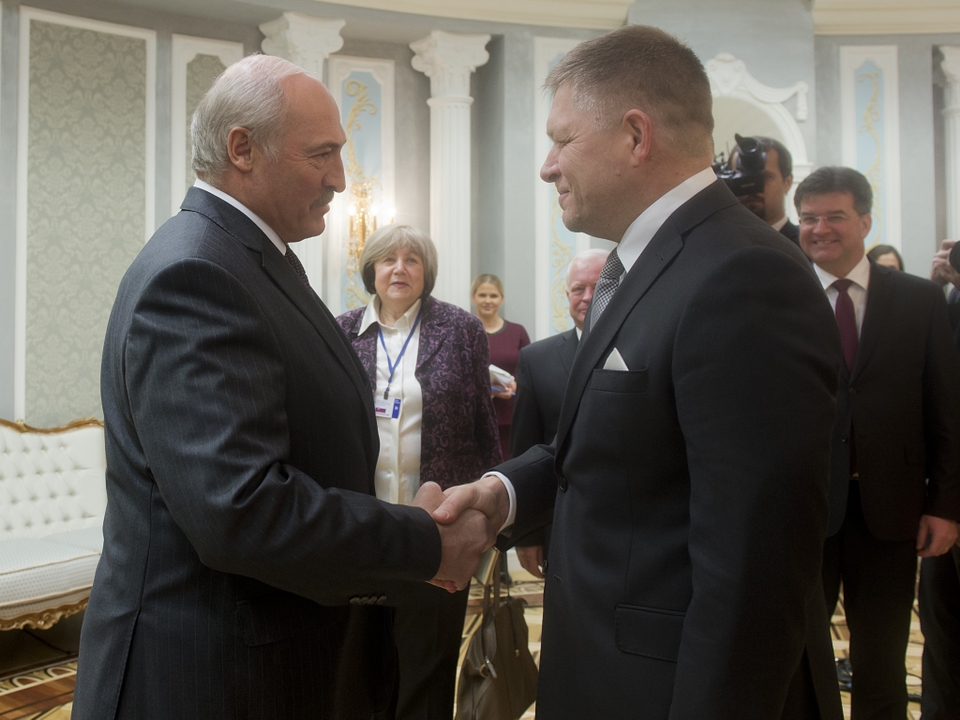 Despite the fact that Slovakia currently holds the EU presidency, the country’s prime minister can hardly be seen as representing an agreed-upon European position towards Minsk. Fico has been known to take a divergent position on Russia in the EU, based on the concept of ‘Slavonic solidarity’.

In Minsk, Fico called Belarus ‘a friendly country’ and reckoned that the situation there has improved. He also expressed satisfaction with the abolition of sanctions against Belarus, calling them harmful and meaningless.

Upon returning to Bratislava, Fico had to defend his visit to Belarus and his encounter with Lukashenka on a local television programme. He compared his trip to Minsk to the meeting of German and French leaders in the Normandy format in Belarus in February 2015.

EU officials: “We are not naïve or blind”

A few days earlier, on 21 November, Alexander Lukashenka received a delegation of the Political and Security Committee of the EU Council. The policy-setting officials held meetings with Belarus’s foreign minister Vladimir Makei and opposition activists.

The Belarusian president emphasised Belarus’s role as a ‘pole of stability’ in the region. In return, he sought Europe’s support in strengthening the economic independence of his country.

At a meeting with opposition leaders, The EU delegates asserted that they were ‘not naïve nor blind’ as to problems with democracy in Belarus.

A participant of the meeting told Belarus Digest that the delegation’s attitude towards the opposition had been ‘quite sympathetic’, and that they had displayed a certain level of mistrust towards the authorities. The activist also stressed that this ambiance contrasted somewhat with the dominant mood during similar meetings with Polish diplomats recently.

On the day after his meeting with EU officials, Lukashenka had a five-hour long meeting with his Russian counterpart in Moscow. Meanwhile, Vladimir Putin was quick to highlight that this was only a sideline event to the celebrations of the 70th birthday of Patriarch Kirill.

Before the summit, Russia had signalled via Alexander Surikov, its ambassador to Minsk, that the resolution of economic disputes between the two countries would depend on the results of discussions of political issues. Moscow has been blackmailing Minsk into downshifting the pace of its relations with the West while stepping up military cooperation with Russia.

Deadly silence on the outcome of the meeting has provided a clear indication of its failure. No progress was reported on the outstanding issues of gas price and oil supply in the two weeks that followed Lukashenka’s visit. 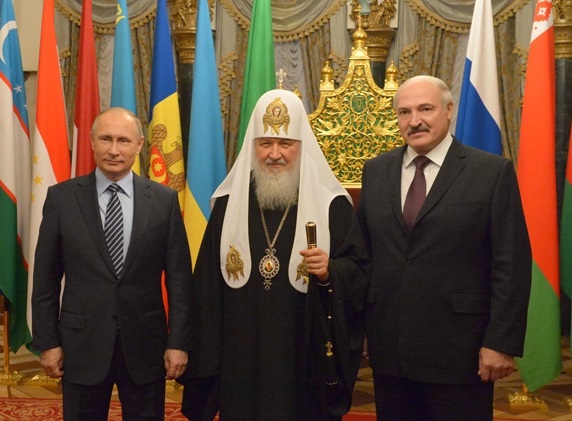 Instead, Moscow has attacked Minsk with its powerful propaganda machine, using its TV channels, media personalities and even the Russian Orthodox Church. They have denounced anti-Russian and pro-Maidan sentiments in Belarus and lauded past Russian imperial figures who played a tragic role in Belarus's history.

Russia has also intensified its efforts to force Belarus into agreeing on a single visa policy. Moscow’s weapon of choice has been the newly introduced prohibition on travel of third-country nations across the Belarus-Russia border. This measure has negatively impacted Belarus’s status as a transit country.

Lukashenka’s recent diplomatic activities have aimed at finding new sources of exports revenue, investments, and loans which would compensate the exhausted flow from Russia. These efforts are unlikely to have an immediate pay off. Meanwhile, Russia is stepping up its pressure to bring Belarus back into its orbit.