On 26 April 2013 Belarusian authorities and the opposition marked the anniversary of the Chernobyl disaster: each in its own way. Alexander Lukashenka went on a trip to the polluted areas as did opposition leaders Anatol Liabedzka and Vital... 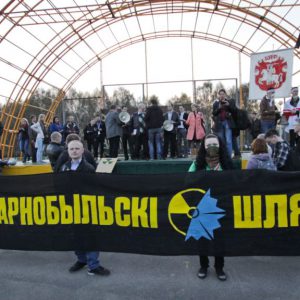 On 26 April 2013 Belarusian authorities and the opposition marked the anniversary of the Chernobyl disaster: each in its own way. Alexander Lukashenka went on a trip to the polluted areas as did opposition leaders Anatol Liabedzka and Vital Rymasheuski.

The Belarusian opposition also gathered around one thousand of its supporters in Minsk under antinuclear energy slogans, protesting against the new nuclear station erected close to the border with Lithuania. Since 1989 it is a tradition for many Belarusians to commemorate the event in the form of street manifestation on the 26 of April called the Chernobyl Way (Čarnobylski šliach in Belarusian).

What Is the Chernobyl Way?

The number of participants this year seems low compared to many previous rallies. Today it is hard to believe but in 1996 over 30 thousand Belarusians manifested in the Chernobyl Way. In 1996, the police forces brutally intervened in the rally and dispersed it arresting dozens of people.

The Chernobyl Way is no longer associated solely with the events that took place in 1986. Nowadays it has a much wider meaning. Political slogans always intertwine with the economic and social ones. For others the rally on 26 April is the only opportunity to express their disapproval for the erection of a nuclear power plant in Belarus.

Participants usually carry the white-red-white flags of the pre-Lukashenka Belarus and banners mocking the president or raising up the current political issues. Almost all the previous rallies ended up with the police intervention and detention of a number of activists.

The organisers and participants learned their lessons how to deal with the city authorities to obtain permission. In 2011, after presidential election protests aftermath which a few oppositional leaders remained in prison, the Chernobyl Way took a form of a gathering only, without a procession. This year it was a rally from the centre of Minsk to a designated location equipped with loudspeakers.

It seems that Minsk are prepared to tolerates this already traditional Chernobyl Way. Each year the organisers receive the required permission for a public gathering. The state, however, wishes to maintain a monopoly over the marking the anniversary. With the full support and loyalty from the state media, it is much easier to achieve it.

The state media serves its role here.  For example, the state TV channel reported only on the official memorable events that took place in Belarus. The journalists presented Lukashenka’s visit to Homel and the official event in Minsk. The reporters did not mention a word about the Chernobyl Was as it did not take place at all.

Aleksandr Lukashenka marked the anniversary in his own way. Traditionally, he decided to appear ‘closer’ to the ordinary people and visited the Khoininskii district in the Homel area. In accordance with the established tradition, Lukashenka met with the local people, publicly criticised officials and praised achievements of the state in the region. He also demanded production of only 'clean' products in the contaminated area. These 'spontaneous' meetings with people and officials are subsequently covered in detail on state TV channels.

Chernobyl through the Prism of Belarusian Politics

The truth about the consequences of the radioactive explosion remained a top secret in the Soviet times. With the years and Lukashenka coming in power, the commemoration of the event became difficult, but possible.

During the Friday rally many people protested against the construction of a nuclear plant in the city of Astravets close to the Lithuanian and Polish border. It makes sense that people express their protest in the streets because the Belarusian authorities initiate no public debate on this issue. The Chernobyl Way remains a rare opportunities to express their ‘no’ to the state’s plans.

Aleksandr Lukashenka clearly dislikes the idea of the Chernobyl Way and mocked it in public at some occasions. For example, in 2011 he said ‘they want with this fascist-minded rally walk on the street, demonstrate. Go to demonstrate to the zone’. However, every year Belarusian authorities give permission the organisers to the opposition rally in the centre of Minsk.

But as most other opposition events yesterday the Chernobyl Way ended with detentions, mostly made by people in plain clothes. Several people were released while others, including journalists were charged with disobeying police and are now awaiting their trials.

EU Should Keep Belarus in Its Orbit

In the first place the EU should send a clear message to the Belarusian authorities that Belarus will be able to receive more assistance if the regime decentralises and simplifies its system. This will encourage other actors to participate more actively in European programmes.

The EU should also increase its cooperation with the Belarusian independent community of experts. As the level of  Belarus' public administration remains quite low, the EU input can provide the most important ideas for the modernisation of the country.

Lukashenka’s regime erects barriers to EU technical assistance. The authorities have created complex and lengthy procedures to obtain assistance, which worsens the conditions for the implementation of projects. Nevertheless, the projects in Belarus serve their function. Technical aid assistance opens up Belarus to the international community and improves the quality of state governance and the lives of people.

EU Message to the Belarusian Authorities

Working with Belarus is difficult. Belarusian expert on European integration Aliaksandr Papko says that the “absence of freedom of local authorities to make their own decisions is still a great problem. As a result, the local officials sometimes have to either wait for years till the top officials approve a project or refuse to take on any responsibility.” Thus, it is primarily the Belarusian side which can improve the efficiency using the aid available to them.

Bearing in mind these differences, the EU message to the Belarusian authorities should be simple: even in today's political environment, Belarus could receive more. But the procedure for obtaining technical assistance to implement projects should be de-bureaucratised, so that project realisation is not delayed for a few years. Currently it takes two or three years from the identification of a project to the actual signing of a contract.

The EU should increasingly engage local authorities and average Belarusians in European projects aimed at supporting Belarus' infrastructure. If the Belarusian authorities wish to work more closely with the EU, they would have make internal changes and decentralise the process of obtaining technical support. The European Union has provided over € 510m to Belarus for the years of the country's independence. This seems enough to demand certain concessions in the organisational sphere from the regime.

It is important to understand that the authorities can easily simplify procedures for receiving technical assistance. They may be lazy and sly, but the bureaucracy can work if someone can clearly explain a direct relationship between the much-needed money and a simplification of procedures.

Belarusians themselves need to stop thinking too much about the regime and try cooperating with the EU directly. According to the Delegation of the European Union to Belarus, even under the current political conditions, it is possible to do more. For example, Belarusian organisations could participate much more actively in thematic global calls for proposals and even more actively in regional and cross-border programmes.

However, not many Belarusian organisations meet the EU’s requirements. Belarusians think that European programmes remain too bureaucratised. The European Union for its part should simplify the procedures surrounding the projects and applying to them. They should also promote initiatives that provide assistance to Belarusian civil society organisations on simple tasks, including how to develop project proposals for the European Commission.

What Should the European Union Do?

First, the EU and the Belarusian authorities should elaborate the “road map” of the technical aid for Belarus. In the document, the parties should outline common priorities, obligations and subsequent steps for rendering technical aid to Belarus in specific spheres. The EU will elaborate its own documents in the form of the country strategy paper, but the very creation of such documents should include the opinions of a larger number of stakeholders.

Secondly, the European Union should be prepared to deal with the fact that the Belarusian authorities may not engage in dialogue. Therefore, such a document should be elaborated in the framework of a Dialogue for Modernisation. In this case, the status of this “road map” will be downgraded in a sense, but the EU and civil society will be able to coordinate their actions. Moreover, independent experts often understand Belarus’ needs much better than officials and can be more honest.

Thirdly, the EU should cooperate with local authorities and NGOs as much as possible and facilitate their independence from the Belarusian regime. Local officials and NGOs may in turn prove to be the most open and willing to accept best practices in good governance.

Technical assistance should become an instrument to improve the qualifications of Belarus' system of public administration. The more direct contacts  between European officials and representatives of the Belarusian nomenclature have, the more likely the goals of the technical assistance provided and the common European strategy on Belarus will be achieved. Belarusian officials at low and middle level positions do not bear much of the burden of the regime’s viciousness and can become the main actors for future reforms.

Investing in the Future Now

Belarus needs a long-term strategy by the EU. Still, it is difficult to demand long term change from European officials as they cooperate with Belarusian authorities whose actions have remained unpredictable. Thus, European policy makers should focus not just on the regime, but also on those who want to change it inside the country, and those inside the regime itself.

It is also time for the EU to start promoting youth organisations which have clearly articulated social and economic agendas. From these organisations a new political class of Belarus will subsequently grow.

There should be no illusions – most likely the quality of the cooperation will remain at the same level as now while Lukashenka remains in power. But increasing the efficiency of EU assistance may push Belarus towards European standards and broaden the pro-European mood and Europe's influence within the society and within the Belarusian bureaucracy.